Welcome back to Longbox Junk, the place to find comic reviews you never asked me to write!

Here at Longbox Junk, we're having Halloween fun without a single kitty costume in sight! I've decided to keep the Retro Review ball rolling along for a while longer by taking a look at some of the older horror/ supernatural comics in my collection through the month of October.

This time out, I'm shining the spotlight on a Golden Age goodie from 1953, before that pesky Comic Code ruined all the fun horror comics were having. I think the paper time machine is ready. *Puts on ridiculous steampunk goggles* Sit down and strap in! 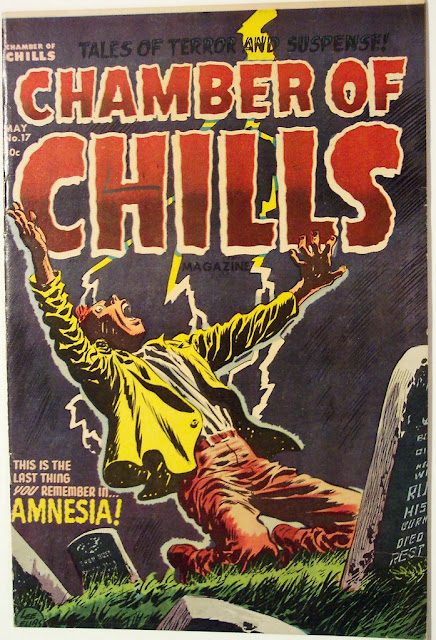 COVER: Lee Elias
THE COVER:
This is another comic book I might have paid a bit too much for just because of the cover.  But when it comes to horror comic covers, you can't get much better than this! A man alone in a graveyard on a stormy night, screaming in wide-eyed terror. . .what's he screaming about?  Who knows! You gotta read the comic to find out, right?  This is one FINE example of a comic rack eye-catcher!  Let's get inside and see what all the screaming is about, shall we?
THE STORIES:
Once again, never let it be said that Golden Age comics didn't deliver their money's worth.  Under that outstanding cover are FOUR full comic stories, TWO text stories, PLUS a tutorial on how do do some magic tricks. . .all for one lousy dime!  Let's take a look at each in turn. . .
AMNESIA!
SCRIPT: ?
PENCILS: Warren Kremer
A man struck by lightning in a cemetery wakes up in the hospital with amnesia.  As he follows the few clues he can find to recover his identity, the man finds himself pursued by horrific creatures until he finally realizes that he's actually their leader. . .SATAN! 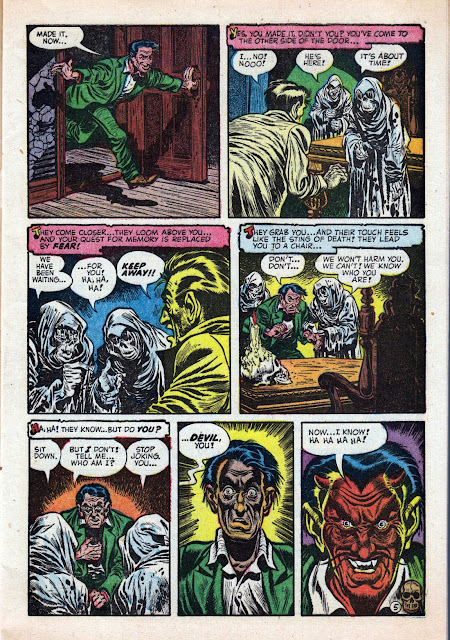 I'm half and half on this one.  The mood and writing are great here. . .until the end.  The ending is pretty ridiculous and out of nowhere.  Getting there is a lot of creepy fun, though.  This story also has some really great art!  Dark, detailed, and exaggerated just the right amount. Every page is a treat.  There ARE some color issues to be found, but that's pretty much par for the course on Golden Age comics to have some sloppy and/or garish colors, though.  A decent start. . .let's get to the next one!
COLD TYPE (1 page text only story)
SCRIPT: ?
A man who takes everything in his favorite newspaper as gospel reads his own obituary and decides to kill himself in order to keep the news accurate. 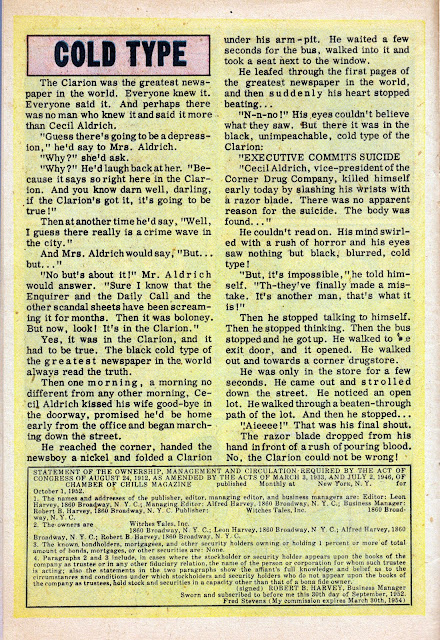 Okay. . .not a bad little story.  It's well-written for an obvious space-filler on top of the quarter page of indicia.  It's nice they included it instead of just throwing some ads on what would otherwise be wasted space.  Moving along!
CHILLER DILLERS!
SCRIPT: ?
PENCILS: ?
A one page mini-tutorial on how to do three magic tricks. 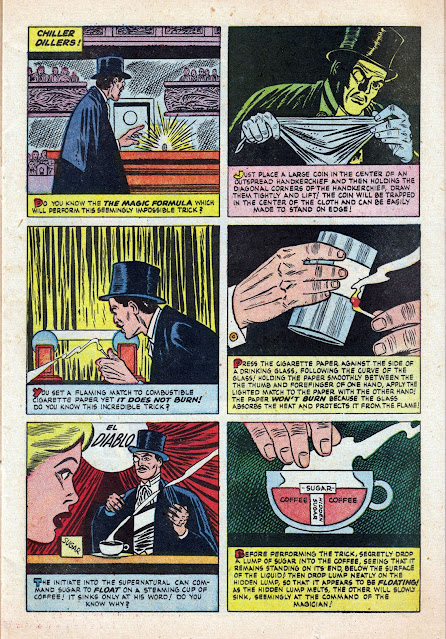 This was a nice little addition!  I actually was able to pull off the coin and handkerchief trick for my comic-lovin' daughter after about an hour of practice.  The other two tricks are a little more 50's oriented. . .I didn't have cigarette paper or sugar cubes handy.  Overall, an enjoyable little feature.
NEXT!
BIG FIGHT!
SCRIPT: Howard Nostrand
PENCILS: Howard Nostrand
A boxer enters into a mysterious fight where the opponent is unknown and death is the referee.  When he loses, he is reborn as his boxing manager's baby. 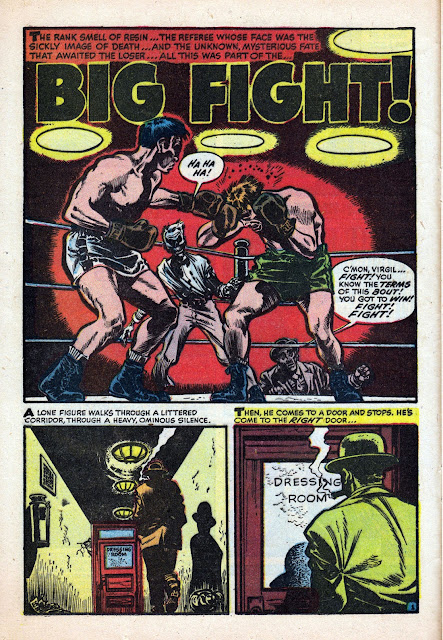 The art and writing on this story combine perfectly for a strange, dark and dreamlike feeling.  Unfortunately the story itself doesn't make any sense at all.  It's a great vehicle for something  that FEELS like it has deeper layers of meaning, but ultimately the atmosphere is wasted when you come to the end of the story and ask yourself what the heck you just read.
NEXT!
BRIDGE!
SCRIPT: ?
PENCILS: Moe Marcus
After a successful bank robbery, one of the criminals is killed by the other three in order to reduce the split on the money.  Each year afterwards, the ghost of the murdered man kills one of the others in a way having to do with London Bridge, where he died. 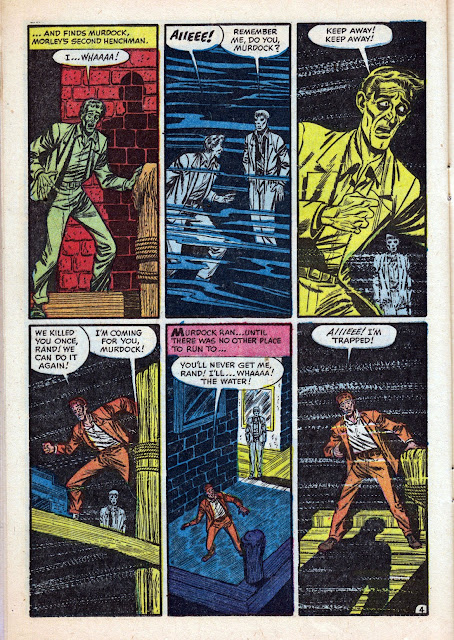 What we have here is a pretty straightforward ghostly revenge tale.  It's not bad for what it is, but it's also not great.  It rides right down the center lane of being pretty average.  The art here is also just sort of. . .there. It tells the story, but doesn't even try to reach any higher than it needs to.  There's also a lot of color issues here.  More than any other story in this comic.  The sloppy and garish colors are distracting and take everything down a notch.  Well, I guess they ALL can't be winners.
NEXT!
JEALOUSY (1 page text only story)
SCRIPT:?
A spurned lover stalks and kills his rival.  In the end, it's revealed all the characters are dogs. 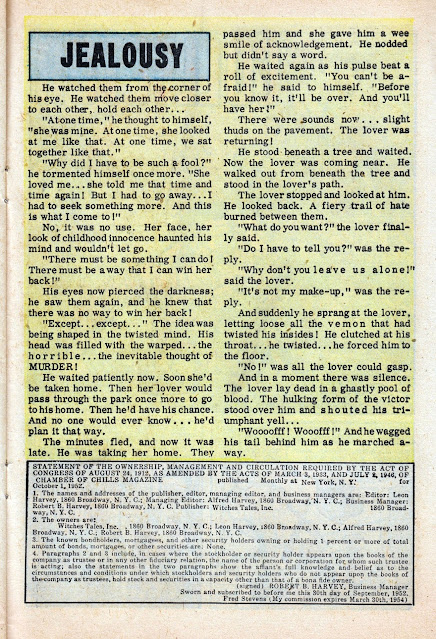 I'm not exactly sure why this comic required TWO quarter pages of indicia, but here we are.  Unfortunately, this space filler isn't quite as good as the first.  There's some nice internal monologue going on, but the ending "twist" just feels sort of unnecessary.  Once again, it's nice that the publisher actually put something here besides ads, but the story itself is pretty forgettable.
AND FINALLY. . .
THE COLLECTOR
SCRIPT: ?
PENCILS: Joe Certa
A jaded hunter realizes that he has no more trophies to collect.  But then he discovers a strange pond that transforms whatever goes in the water into a twisted version of itself.  He enjoys hunting the unique specimens he creates until he falls into the pond himself and finds himself hunted by an evil version of himself. 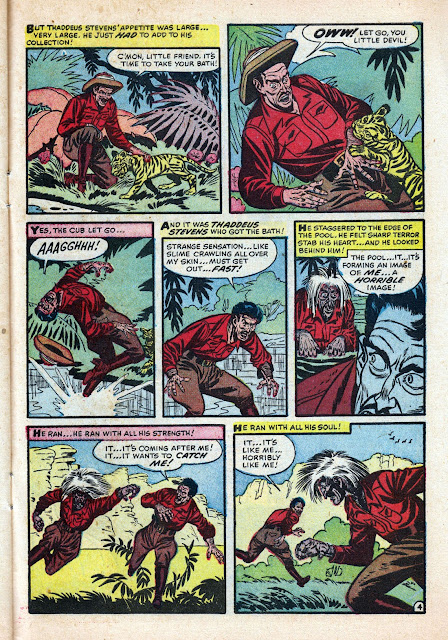 A pretty straightforward story about a man discovering something great, then going too far and paying the price.  It's not a bad story, but it's pretty forgettable.  The art here is also pretty basic.  Like the story, it's not bad, it does the job it's supposed to do, but doesn't try any harder than that.  More sloppy and garish colors take the art down a bit as well.  I guess that's just a Golden Age thing.

Chamber of Chills Magazine #17 is a bit of a mixed bag, but overall I found it to be a pretty enjoyable comic.  None of the stories were particularly great or memorable, but there was some really great artwork in a couple of them that elevated things quite a bit.  I think the main problem with the stories is that they start pretty strong, but end weak.  Even given that, there's nothing really BAD here.
I'd certainly recommend this comic to any collector wanting a decent Golden Age horror (Okay, more like "supernatural suspense") comic in their collection.  If nothing else, it has a cover that's hard to beat AND you can learn a magic trick!
Up Next. . .
The Longbox Junk Halloween Retro Review party keeps going!
Let's head back to the Bronze Age for a look at DC's The Witching Hour #13 from 1971.
Be there or be square!