Welcome back to Longbox Junk, the place to find comic reviews nobody ever asked for!

Sorry for a bit of delay.  The challenges of trying to run a hotel on a skeleton crew while having typical summer tourist sellout guest traffic aren't what most people would call "fun".  It's made worse because at the same time people are getting out and about on their normal summertime travels, we're having a hard time hiring new employees because our government has decided that, for some strange reason, it's a GREAT idea to pay people more to sit home on unemployment than to come back to work full time.

I've decided to step outside of my usual bargain bin fare for a little while and take a look at some comics in my collection a little more on the older and maybe more "collectible" side of things.  Retro Reviews of comics from before 1986 (Nods to the fine folks of Old Guys Who Like Old Comics) is what I'm talkin' about.

The comic at hand today is one of the very short-lived (and by that I mean abruptly cancelled and unfinished after 3 issues) titles put out by short-lived publisher Atlas Comics (AKA Atlas/Seaboard).  I'm not sure if three issues is even enough to call a title a "series", but here we are.

The sad tale of Atlas/Seaboard comics is an interesting one that I'm not going to delve TOO deeply into, but the gist of it is that the company was the brainchild of Marvel Comics founder Martin Goodman and was a pioneer in creator rights, allowing the return of artwork to artists, paying some of the highest rates in the industry, and allowing retention of rights for new characters created.

Unfortunately, internal fighting and a comic industry that just wasn't ready for their business model sunk Atlas/Seaboard fast. . .they lasted less than a year and put out less than 100 total issues.  Of their 23 titles, none of them lasted more than 4 issues.  Many of them only lasted for a single issue.

Like I said, I'm not going to delve too deeply into the publisher, but the tale of Atlas/ Seaboard is well worth looking up if you're interested in some of the behind the scenes drama of the comic world.

Probably the most interesting thing to ME about Atlas/Seaboard is that, even though they folded very quickly and put out very few issues, they are STILL remembered with a certain fondness.  The whole line in general seems to be pretty collectible, which is surprising for a bunch of unfinished stories put out by a company that didn't even last a year.

I'm not so sure if this particular title is remembered as fondly as some of the others.  When doing my bits of research, I saw it's rarely even mentioned, which is why I picked it from among the handful of Atlas/Seaboard comics I own for this review that nobody asked me to do.

Let's set the Longbox Junk Paper Time Machine for 1975 and take a peek at this practically-forgotten Bronze Age relic, shall we?  We shall! 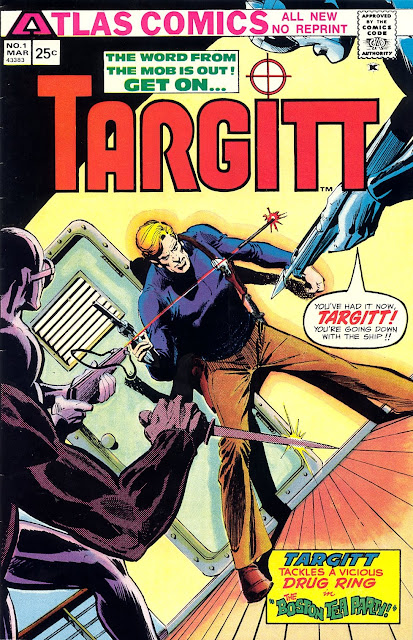 BOSTON TEA PARTY
SCRIPT: Ric Meyers
PENCILS: Howard Nostrand
COVER: Giordano
THE COVER:
Hmmm. . .not bad.  Not great, mind you, but nicely-done.  It delivers the message that this isn't a superhero book, and I dig the whole 70's-Tastic vibe of it.  I like the tilted perspective and the colors quite a bit.  It's not the best cover in my collection, but it's a solid example of a Bronze Age comic rack eye-catcher.  Let's get inside!
THE STORY:
Our tale begins at an airport, where Special F.B.I. Agent John Targitt says goodbye to his wife and daughter as they leave on a trip to his mother-in-law's.  Unfortunately, it's the last time he'll ever talk to them, because moments later the plane explodes after taking off! 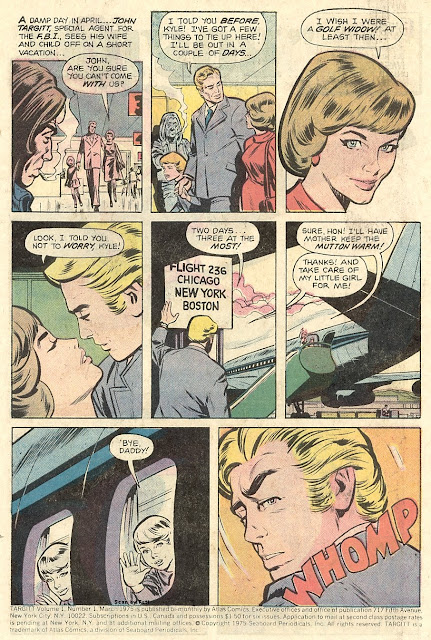 Rushing to the burning wreckage, Targitt finds a newspaper from Boston.  Shortly afterwards, his boss, Carl, and partner, Jackie arrive and tell John that Mob Boss Bert Manetti was also on the plane and was the target of the bomb.  Over their protests that he not, Targitt informs them that he is headed to Boston to find who killed his family. 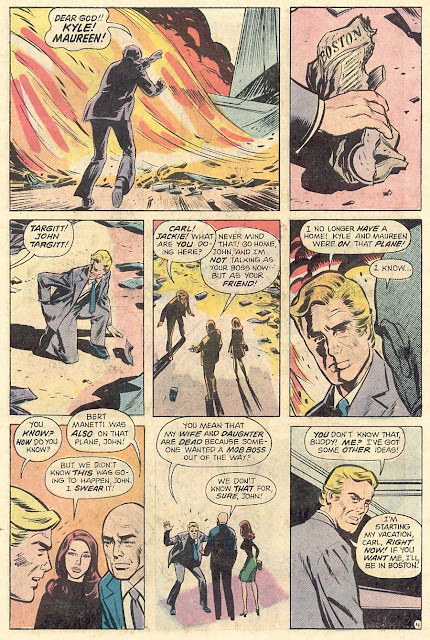 Later, in Boston as Targitt arrives at the airport, he is attacked by a mysterious man.  He's no match for the highly-trained Targitt and is wounded, then interrogated by the F.B.I agent.  Targitt gains a lead directing him to a Boston University dorm room. . . 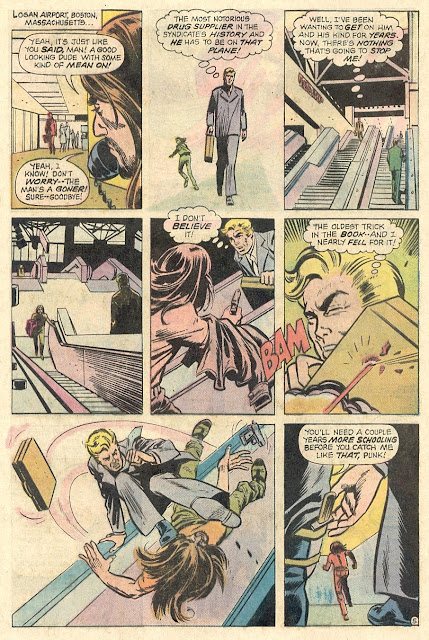 That night, at the University dorm, Targitt is taken by surprise by a man laying in wait for him. . .a man Targitt realizes he recognizes from the airport just before the plane carrying his family exploded!
Thinking he has Targitt dead to rights, he tells the F.B.I. agent that he killed Manetti because he wanted to take over the Boston drug trade.  A fight between the two breaks out, but before it can be resolved, the alarm is raised and Targitt is forced to make his escape. . . 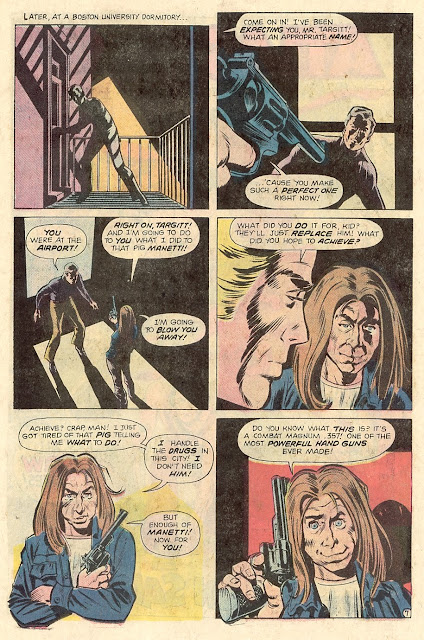 Later, Targitt encounters three well-known mob hit men following him.  A fight breaks out in the street and Targitt is surprised to find his F.B.I. boss is ALSO following him.  Targitt easily dispatches the would-be assassins, but is brought to the Boston F.B.I. field office to explain himself. . . 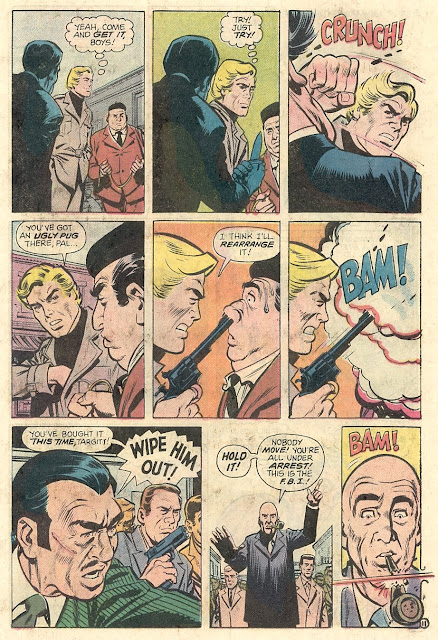 At the field office, John is interrogated by his boss, Carl, about his actions.  Despite the grilling, Targitt remains cool under pressure and refuses a direct order to return to Los Angeles and give up on his crusade to bring the killers of his family to justice. . . 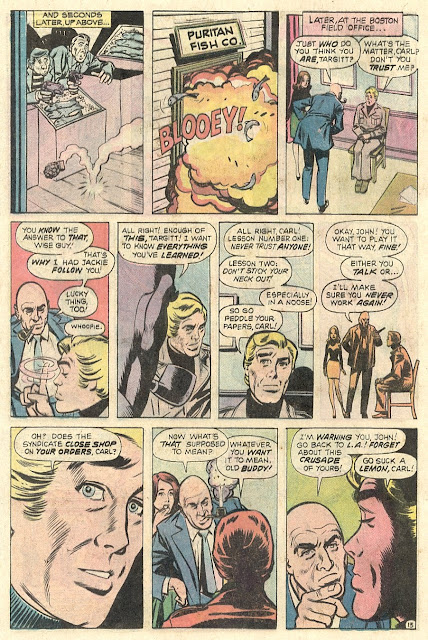 Later that night, Targitt returns to the Boston University dorm room to continue his "conversation" with the man who claimed to have been the one who planted the bomb that blew up the plane with John's family on it.  He is ambushed by one of the hit men he escaped earlier that day, who has already killed the man john wanted to talk to.
Before the hit man can shoot John, he is shot from behind by Targitt's L.A. partner, Jackie.  A heartfelt discussion between the two reveals that John is planning to ambush a drug delivery that very night. 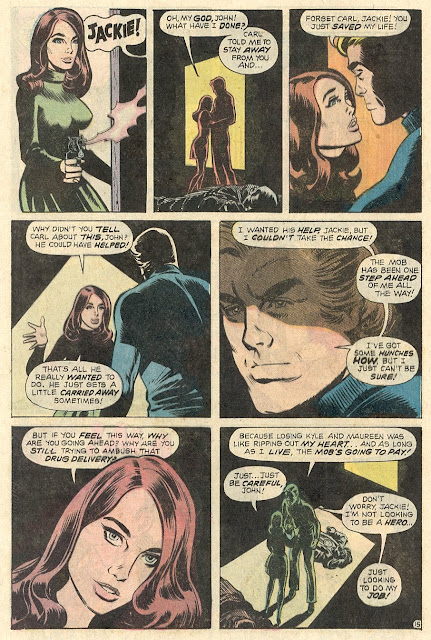 That night, Targitt is staking out the harbor in a rowboat.  He follows the sound of a submersible scooter to a freighter. . .the mob is using submersibles to transfer drugs and money into a hidden airlock below the freighter's waterline so as to not attract attention above. 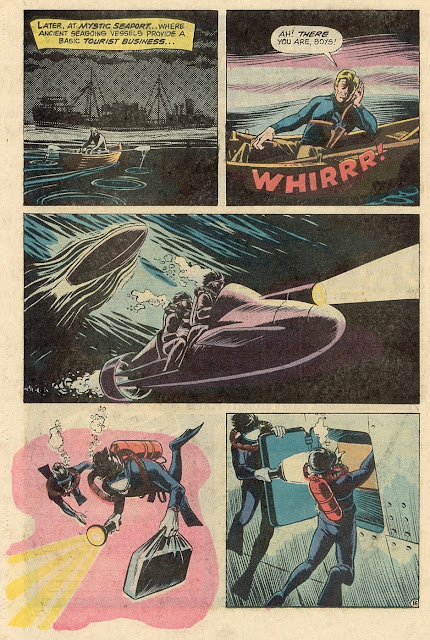 Now he knows where the drugs and money are, Targitt goes on the attack!  He stalks the deck of the freighter, gunning down any mob goons that cross his path.  Two of them attempt to flee the carnage with the money in a helicopter, but Targitt grabs a machine gun and shoots them down. . . 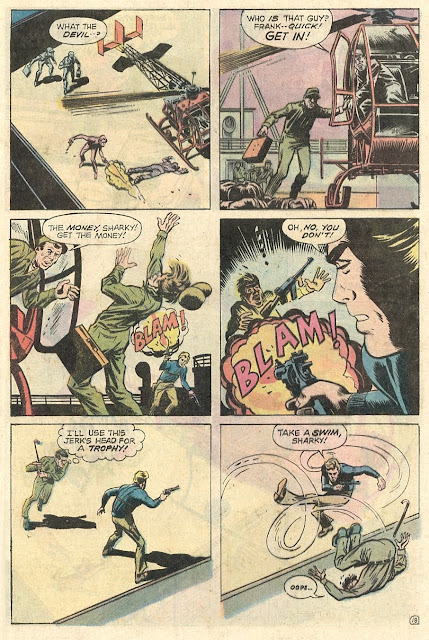 In the aftermath of the battle, Targitt finds the briefcase full of money, dropped from the helicopter as it crashed.  He dumps the money into the water without a second thought.  He has a darker purpose, and money isn't a part of it. 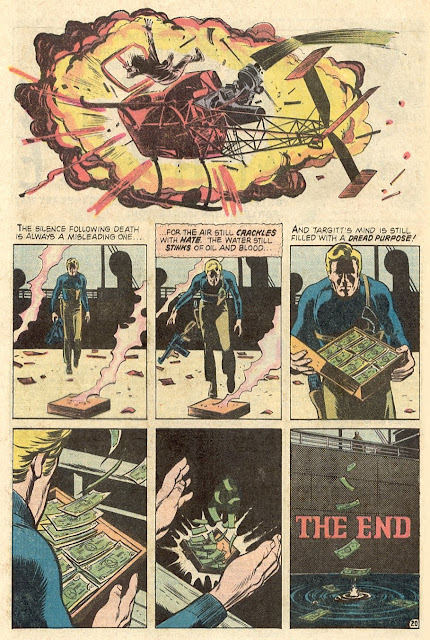 The End.
THE REVIEW:
Allrighty then! Let's break it on down.
What we have here is basically The Executioner by way of Dirty Harry, watered down for comics.
For those who haven't read any of them, The Executioner books were a long-running series started in 1966 by Don Pendleton (and a bunch of ghost writers) following the grim adventures of Mack Bolan, a soldier whose family were killed by the mob.  There's a VERY clear Executioner influence here.
Fans of Clint Eastwood's no-nonsense, rule-breaking cop "Dirty" Harry Callahan will also see pretty obvious story beats. . .especially in the scene where he's being berated by his F.B.I. boss.  Frankly, I was expecting a mouthwash joke, and was a little disappointed they left it out.
Unfortunately, what COULD have been a pretty great mashup of pulpy neo-noir influences just really isn't that interesting.  Once I realized where the writer was going with this, I WANTED it to be great. . .but at the end of the day it's just okay.
The story just doesn't have the sort of "zing" you'd expect from something influenced so heavily by Mack Bolan and Dirty Harry.  Sure, there's action and violence here. . .some of it pretty graphic for a code-approved comic, even.  But the scenes feel disconnected and just sort of flat.  The story follows a ruler straight "He went here and did this, and then he went here and did this." path from page one to page last.
The final scene where he throws the money in the water is really the only really interesting character moment in the whole thing.  If the whole story had such a dark, pulpy tone as the ending, this would have been a great little hidden Longbox Junk gem, but as it stands it's pretty forgettable.
As far as the art goes. . .it's a little schizophrenic.  It switches between cartoony and exaggerated to dark and gritty from page to page.  Overall, it's not BAD, it just seems that the artist couldn't decide on the tone he wanted.

Well, not every comic can be a winner.
I wouldn't go so far as to say this is BAD, it's not bad.  It's okay. . . but it could have been a lot better than what we got.  I guess the publishers felt the same way because in the next issue, Targitt becomes an agent for a secret F.B.I. division and is issued a bulletproof superhero suit and new identity as "Manstalker" for a very short-lived career (2 issues) as a costumed hero.
The story had all the right violent, pulpy, neo-noir influences to have been something pretty interesting, but I guess watering them down for a code-approved comic just didn't work out.  I like that Atlas/ Seaboard was trying to step outside the superhero genre with Targitt, so credit where credit is due for trying to do something a little different, but at the end of the day this is a pretty forgettable comic.
Up Next. . .
I don't think I'm quite done with the Retro Reviews just yet!
So many comics to choose from.  I'll have to ponder what's next.  Suggestions are welcome!
Be there or be square.