Welcome back to Longbox Junk, where the opinions are free and if you don't like 'em you get a full refund!

July isn't quite over yet, so there's still time for a little more flag wavin' Captain America Longbox Junk. If you don't like a bit of "AMERICA $%&# YEAH!" in your comics for whatever reason, I can dig it. Just be sure to come back next month for whatever I pull out next. Fair?

The comic at hand is one of a series of seven Captain America one shots that came out through 2008 - 2010 under the collective banner of "Captain America - Theater of War". They tell single issue tales that cover a variety of time periods, styles and stories. . .everything from straight up WWII action to Captain America as the embodiment of the American Spirit. Most of them are good. A few are great. A couple are awful. This is one of the good ones.

It's Captain America vs. Ratzi flying saucers! Let's do it! 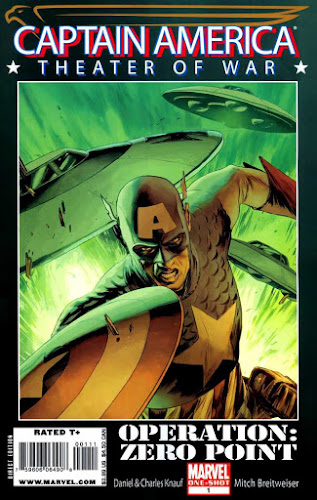 THE COVER:
Cap's face is a little strange, but I really like the feeling of motion coming from this cover! The eerie greenish tone gives a nice retro sci-fi feel to the action. Not the greatest Captain America cover in my collection, but still very nice. Let's get inside!

THE STORY:
We begin our tale in 1944, flying over Southern Poland as Captain America ponders the mission at hand. . .meeting with a member of the Polish Resistance, who will guide Cap to a secret Ratzi base where they have supposedly invented some sort of anti-gravity aircraft. From there, he'll extract a Ratzi scientist who wants to defect with the anti-gravity secrets and then blow the base sky high. In other words. . .just another day for America's Super Soldier. 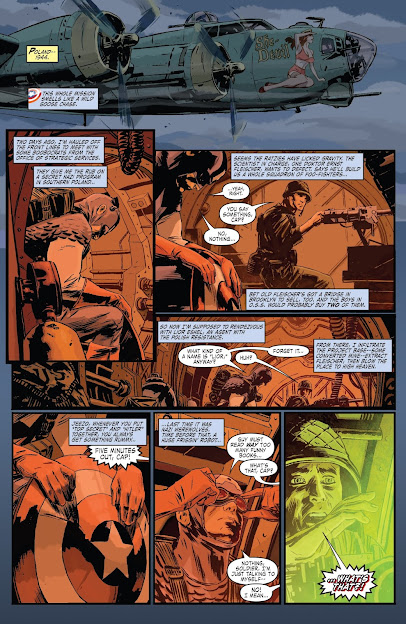 Unfortunately, Cap's thoughts are interrupted as his plane is attacked by mysterious saucer-shaped aircraft. It's a little sooner than expected, but Cap's officially on the clock! 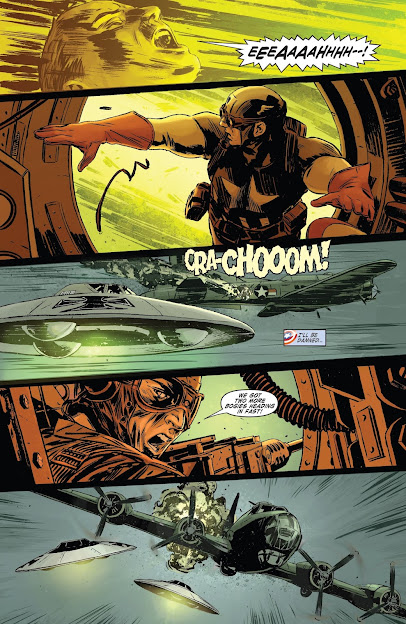 On the ground after escaping the crashing bomber, Cap avoids Ratzi patrols as he makes his way to the rendezvous with the Polish agent. . . 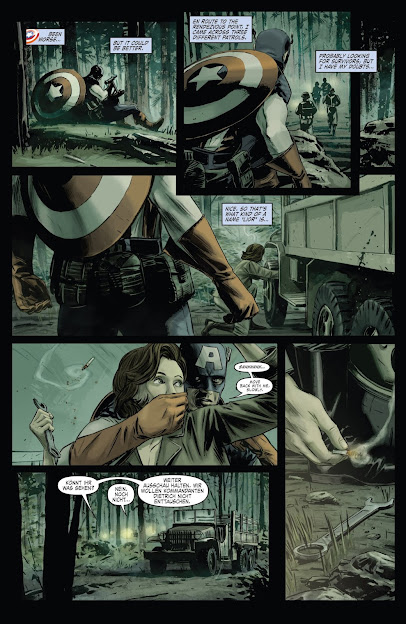 Cap and Lior (the Polish Agent) Make their way to the secret Ratzi base, working their way through a junkyard of downed aircraft. . .proof of the effectiveness of Hitler's newest weapon. Upon arrival, the team's recon of the base gives Cap his first look at the imposing commander of the facility's SS guards. . .a giant of a man called "Der Metzger", The Butcher, who is rumored to have lost an eye fighting a bear with his bare hands.

Their recon also reveals Jewish prisoners, who Lior informs Cap are forced to not only work on building the base, but are also used for horrible experiments inside. Cap changes the mission on the spot to include rescuing the prisoners. 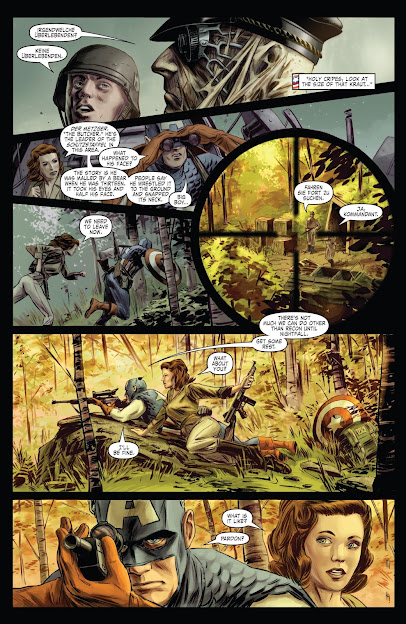 Unfortunately, Cap's plans are interrupted as their position is discovered and the base's guards attack, supported by the Ratzi saucers! Captain America puts up a good fight, but they are quickly overwhelmed, with Lior killed and Cap taken prisoner. . . 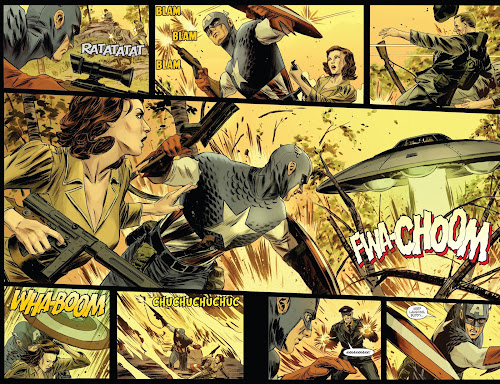 Cap regains consciousness strapped to a table with Der Metzger and a Ratzi scientist examining him. They inform their prisoner that the whole operation was a trap. They intercepted the defecting scientist's communication and Lior was a double agent. The true prize was the Ratzi capture of America's Super Soldier! Cap is taken to a cell after being told that experiments on him would begin the next day. 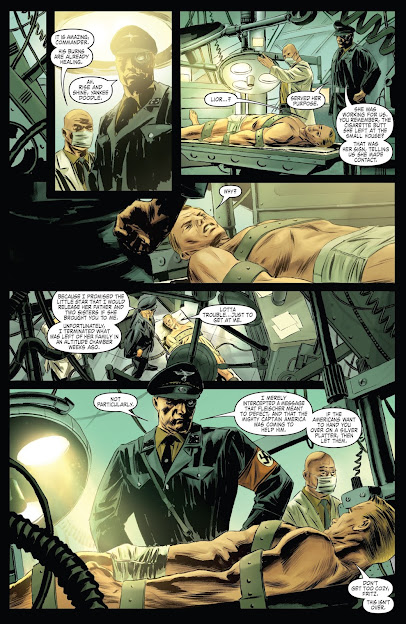 But Captain America isn't just going to sit in a cell and wait for Ratzis to experiment on him! After discovering that the man in the cell next to him is Fleischer, the Ratzi scientist he was sent to retrieve, Cap decides that the mission is still on and is going just fine.

Using his enhanced strength and a bit of trickery, Cap breaks the two of them free, retrieves his equipment, and then plans a coordinated attack with Fleischer, with the scientist destroying the saucer's power source while Cap rescues the Jewish prisoners. Afterwards, joining up to escape before Cap destroys the base. Simple, right? What could go wrong? 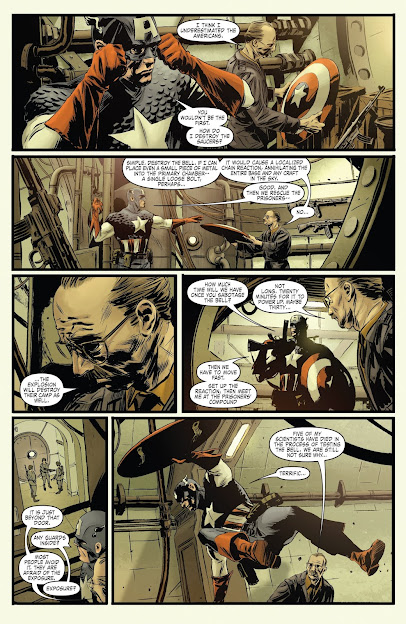 As the base's alarms go off, Captain America begins fighting his way toward the Jewish prisoners, causing as much commotion as he can in order to give Fleischer time to sabotage the saucer's power source. . . 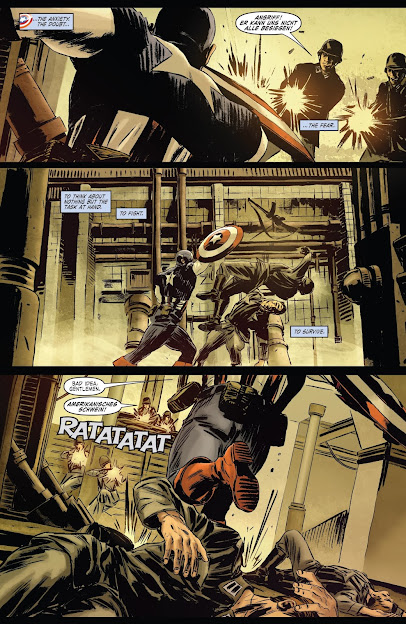 Unfortunately, Fleischer's efforts weren't quite quick enough, and Cap is attacked by the Ratzi saucers! Using all of his skills, he manages to disable the attacking aircraft. 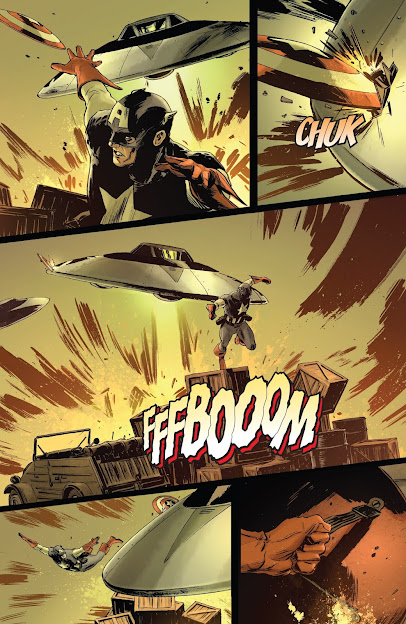 Cap sees that Der Metzger has captured Fleischer as he escaped the Ratzi base. Metzger mocks the American hero, telling him that in order to save Doctor Fleischer, Cap will have to go through him. Captain America wastes no time in taking up the giant Ratzi's challenge! 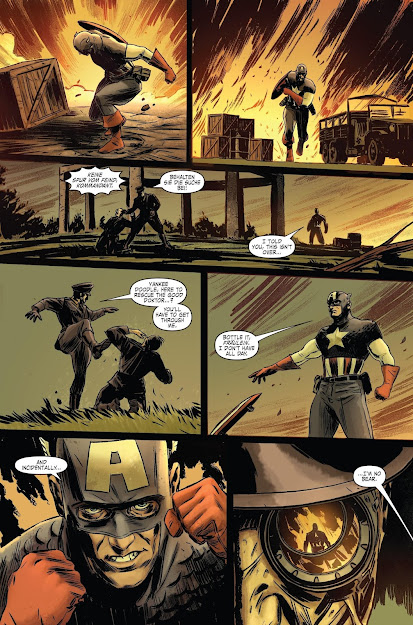 A brutal one-on-one battle ensues, with Captain America barely managing to hold his own against the giant Ratzi commander. . .but eventually, Cap's grit and determination wins the day and Der Metzger is defeated! 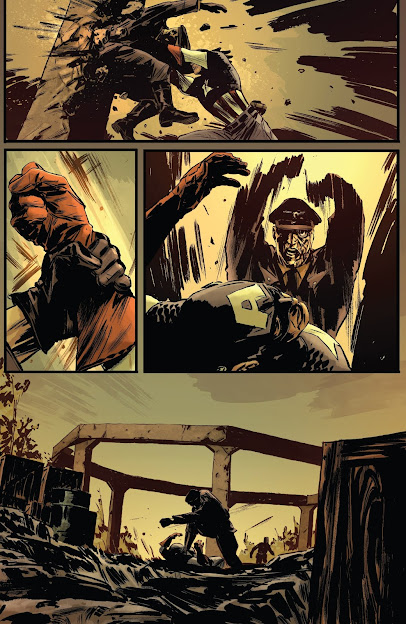 But as Cap and Fleischer make their escape, Metzger summons the last of his strength and shoots the defecting scientist in the back, making sure the allies will never learn the secret of anti-gravity! 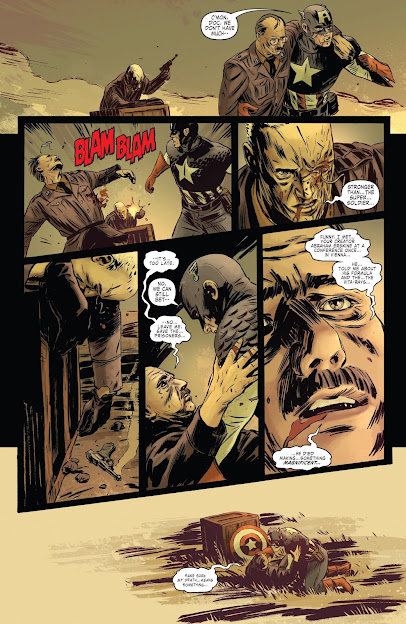 But Metzger's victory is a hollow one as Cap frees the Jewish prisoners and they make their escape while the Ratzi commander is engulfed in the flames of the exploding base. 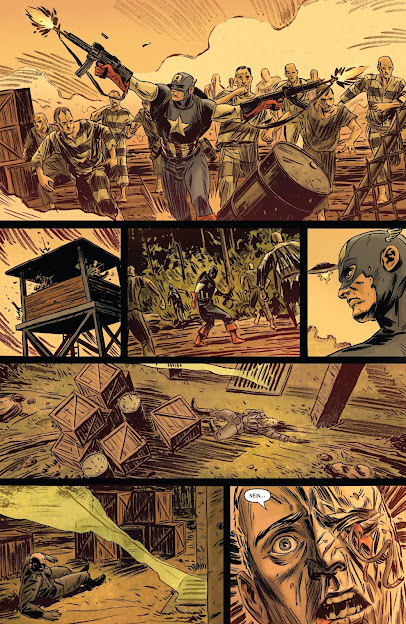 In the end, Cap didn't get the scientist out of Poland, but he freed some prisoners, destroyed a secret base, and beat a smug SS Commander half to death. All in all, it was a decent day. The End. 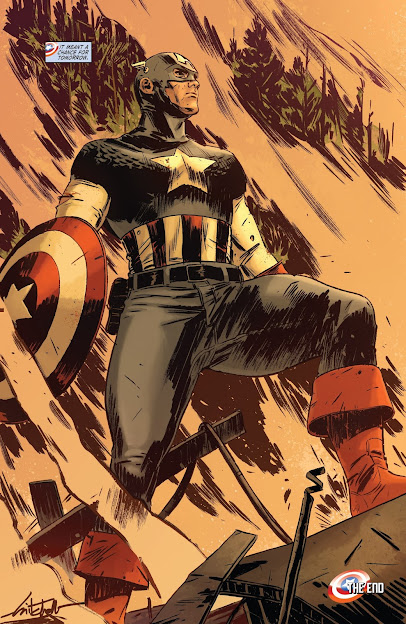 Not bad! Not bad at all! I really liked this story. I've said it before and I'll say it again. . .One Shots are my favorite kind of comic because there's nowhere for the creative team to hide. They have one and ONLY one issue to tell a complete story. There are a LOT of bad one shots out there where the creative team fails the test. This isn't one of them.

The story itself is an extremely simple framework. . .Captain America vs Ratzi Flying Saucers. But in that simplicity the creative team delivers in a big way, giving the reader a modern-day throwback to the Golden Age "Point Captain America at the target and let him go" sort of stories. It's not very deep, but it IS fun!

Sometimes you want your Captain America stories to delve a little into the deeper meaning of him being a symbol of a flawed nation. . .but sometimes you just want Cap to punch some Ratzis. This is definitely a Ratzi-Punchin' story and a pretty good one at that!

I think the thing that I liked most about the writing here was the characterization of Captain America himself. It's a grittier version that still paints him as a true hero (changing his mission mid-stream to include rescuing prisoners), but also gives us a good dose of his Lower East Side roots by showing Cap as someone willing to break a few eggs to make an omelet. In this story, he even carries a gun in a few scenes and isn't afraid to use it.

This Captain America actually reminds me a lot of Marvel's "Ultimate" version of Captain America. I happen to be a fan of Ultimate Captain America, so to me that's a good thing. If you didn't like Marvel's Ultimate take on their characters, you might not get as much out of this story as I did.

But writing is only half of the equation in comic books.

Fortunately, the art side of the creative team holds up their end of the effort very nicely, with Mitch Breitweiser delivering one great-looking comic! Just LOOK at that picture of Cap at the end, above. I'd LOVE to have a poster of that full-pager! His dark and gritty style perfectly matches the grittier take on Captain America that the story gives us. It's a style that I enjoy a lot. . .detailed and realistic, but at the same time dark and sketchy. It's the sort of style that reminds me of Tommy Lee Edwards or Butch Guice, two of my favorite artists.

Overall, this is a great little Captain America story! The creative team delivers a nugget of Longbox Junk gold with a modern throwback Ratzi-Punchin' adventure featuring a gritty, cocky Captain America and some very nice artwork that makes every page of this one shot a feast for the eyes. This one issue gives me almost everything I could ever want in a short Captain America story!

If you're a Captain America fan looking for a good story, then this one is definitely for you! Grab it from the bargain bin if you should spot it. I come across all of the "Theater of War" series of one shots pretty often while Longbox Junkin', so it shouldn't be too hard to find. It's also been collected in trade and is available on ComiXology, if that's more your lane.

If you're not a fan of Marvel's Ultimate version of Captain America, then this might not be your cup of tea. This really reads like a story of Ultimate Cap, and Bucky isn't anywhere to be seen, so even though it isn't advertised as an "Ultimate" story, I'm thinking that's what the writers had in mind when they did this, especially since the Ultimate line was still going strong at the time. I might be wrong. I often am.

Well, that's it for July. Time to stop wavin' the flag.

You know what? It's been a while since I did some "Retro Reviews".
I think I'll dust off the Longbox Junk time machine and check out some of the older comics in my collection. Yeah. . .Retro Reviews! Let's do it!