So it's still July, and I'm still wavin' the flag a bit because I'm a guy who likes to wave the flag a bit in July.  Don't read too much into it.  It just means I'm looking at some Captain America comics this month.  If you don't like a little "AMERICA, #$%&, YEAH!" in your comics. . .fair enough.  Come back next month and I'll be on some other random tangent.

This time out, I'm taking a look at a strange little relic from the edge of the Bronze Age.  A 1985 Captain America story from the Marvel Anthology series, Marvel Fanfare.

Marvel Fanfare is sort of an interesting series.  It was intended to appeal directly to comic collectors by being sold in the direct market only and featuring non-code-approved stand-alone stories by a wide range of comic talent.  It was printed on glossy paper usually reserved for comic covers of the time, without ads,  and cost more than twice the price of the average comic in 1982 ($1.50 compared to .60).

I've pulled a handful of these comics from the bargain bins over the years, and I'm always impressed by the quality of both the physical presentation of the comic and what's inside.  But in an ironic twist, a comic series designed specifically to appeal to collectors is basically 60 issues of Longbox Junk, as far as collector "value" goes.

The stories from Marvel Fanfare have been reprinted in various collections, and there is a collected trade of the first seven issues as well.  But THIS story seems never to have been reprinted anywhere else for some reason.  A bit strange, considering this is the only Captain America story illustrated by Frank Miller.

It's Captain America vs. Homegrown Terrorism tucked away in a random issue of a somewhat interesting experiment in targeting comics directly at collectors.  Let's do it! 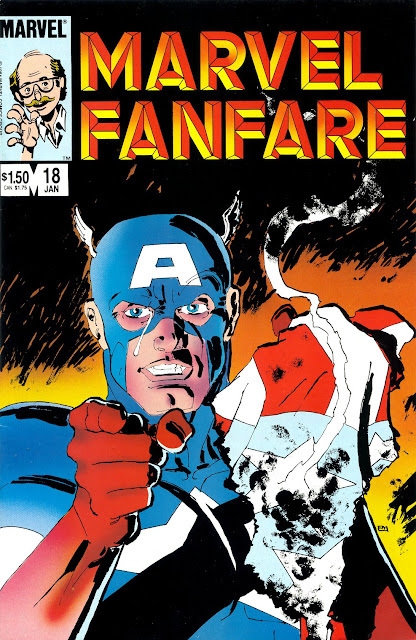 HOME FIRES!
SCRIPT: Roger Stern
PENCILS: Frank Miller
COVER: Frank Miller
THE COVER:
In general, I like Frank Miller's earlier art quite a bit more than his later stuff, but this cover just isn't doing it for me.  It feels like it SHOULD be great, but the execution of this piece is lacking.  Cap's face is a bit strange. . .maybe it's the lazy eye?  Now you can't unsee it, right? His hand is also a bit odd.  The thumb looks like it's detached. There are certainly worse covers than this one out there, but overall it's just pretty disappointing.  Let's get inside.
THE STORY:
Our story begins in Brooklyn at the scene of a raging fire.  Captain America has come to assist in saving lives, then joins the grateful firefighters as they battle the blaze. . . 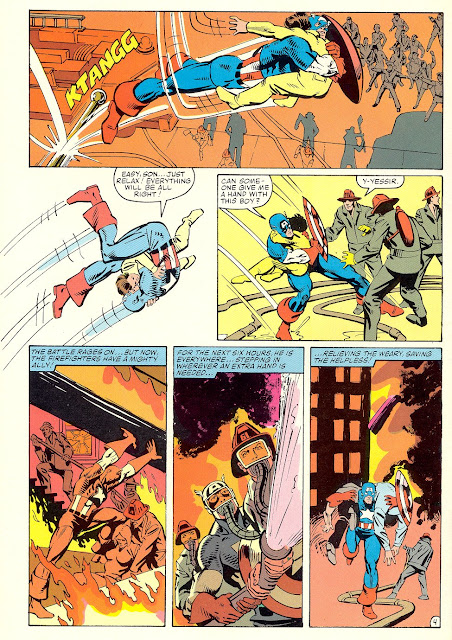 Later, talking with the Chief of Police, Cap learns that the fire was just one of a series set by an arson ring attempting to extort the city.  A note signed "We The People" demands six million dollars or six more fires will be set.  Captain America immediately declares that the arsonists WILL be caught. 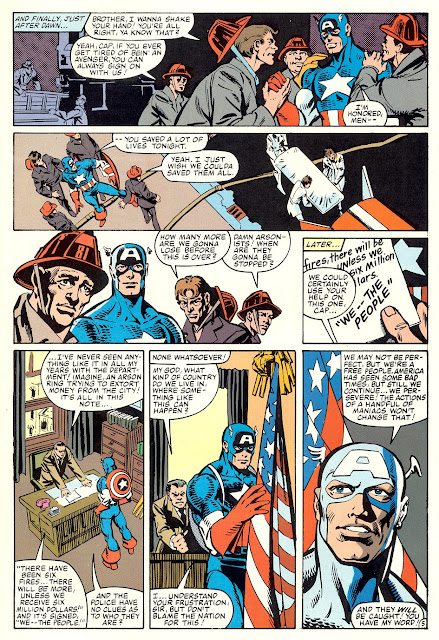 That night, Cap wastes no time in working his way through the seedier parts of the city, following a trail of clues gained from thugs and lowlifes along the way until he finally ends up on the docks at the hideout of a low-level crime boss called "Injun Joe". 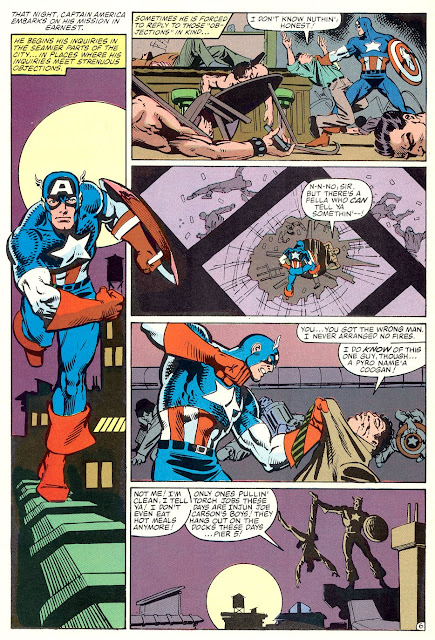 After fighting his way through Joe's henchmen, Cap's trail of clues comes to a dead end when he interrogates Joe and discovers that nobody in the criminal underworld knows who "We The People" are. 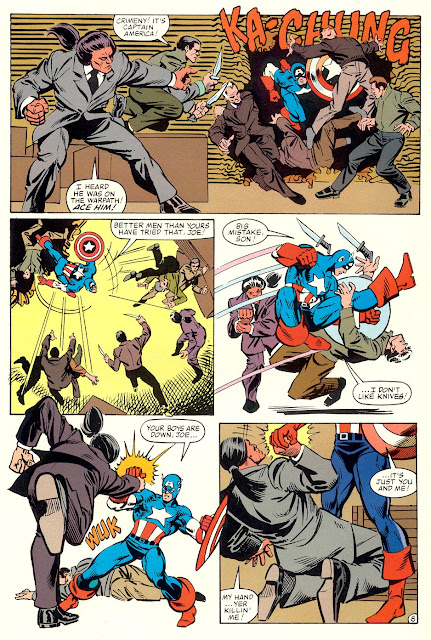 The next day, we are introduced to Hal Brady, just your average everyday working man who ALSO happens to be the leader of a group of frustrated average everyday working men that are behind the string of fires.  They believe that the government is robbing them of their fair share of the American Dream and have turned to extreme methods to protest.
When Hal reveals that their next target is a nursing home, one of his followers tries to leave the group, but Hal forces him back at gunpoint. 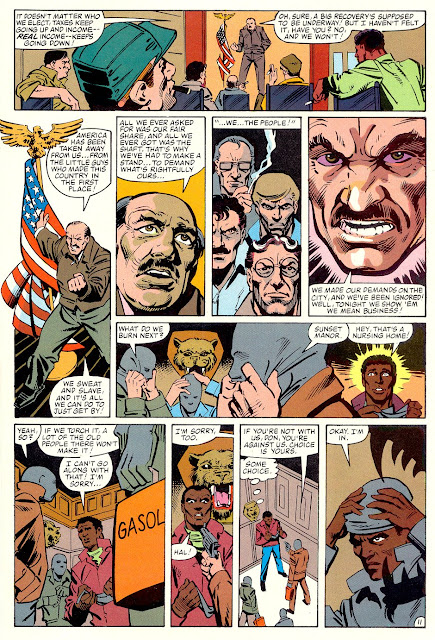 That same night, at Sunset Manor nursing home, Cap once again joins the firefighters of Brooklyn as they battle yet another blaze set by "We The People".  Cap rushes into the burning building to save a woman who was left behind, but despite the hero's best efforts, she dies from smoke inhalation.  Cap's frustration at losing her makes him all the more determined to find the arsonists and make them pay. A fireman gives Cap a new clue to follow with a badge found the scene of the fire. . . 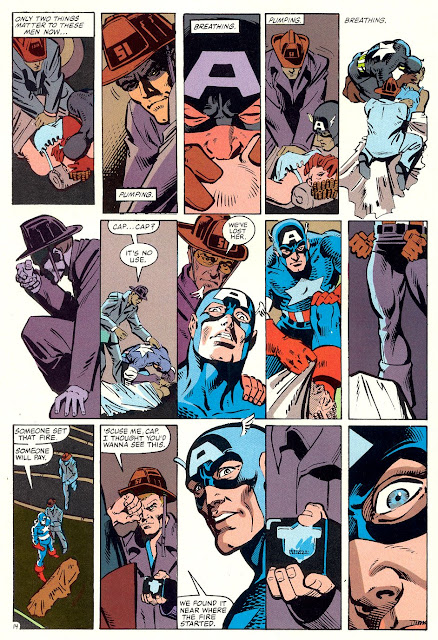 Quickly following up on the badge found at the fire, Cap confronts a police officer named Don who confesses that he's part of "We The People", and that he was at the fire, but tried to leave and was forced to be part of it.  Cap gets the name and location of the group's leader and tells Don to turn himself in to the authorities. . . 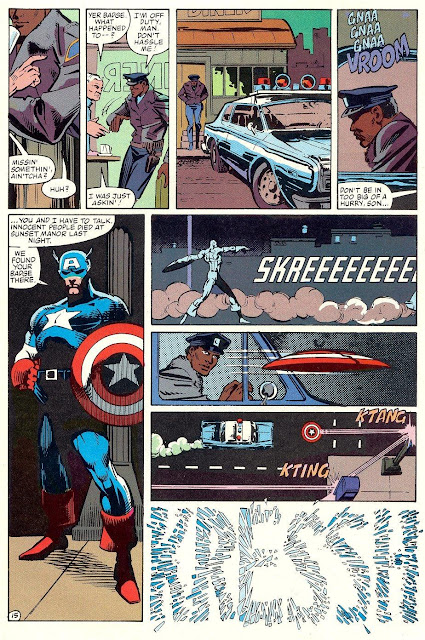 Cap rushes to Hal's home and forces him to take Cap to "We The People's" Headquarters at the "Knights of Brooklyn" fraternity club.  Cap confronts the rest of the group and Hal tries to explain their reasons for setting fires. . .they blame welfare recipients for their being denied what they "deserve" through their hard work.  Cap ain't having any of that nonsense! 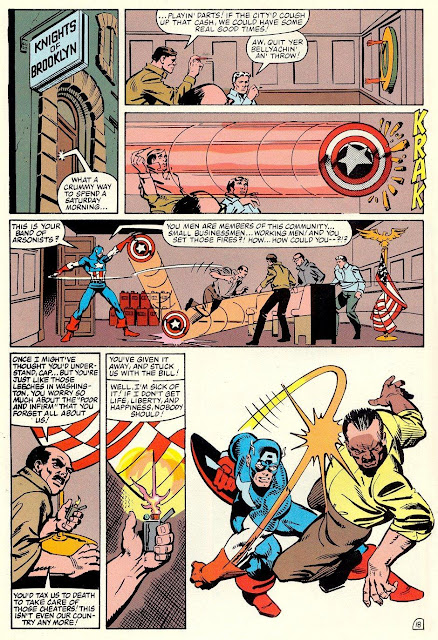 Determined that he'll never go to prison, Hal ignites a stack of gas cans, killing himself and setting the building ablaze.  Cap rescues the rest of the terrified men as the building burns, but then runs back in. . . 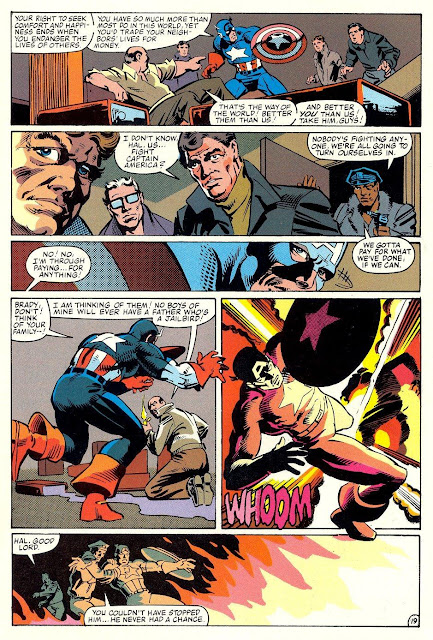 Moments later, Cap emerges from the blazing inferno carrying the American flag from the meeting hall, risking his life to save Old Glory from the flames! He informs the gathered arsonists that nothing comes free in America but hope.  Bless America. . .The End. 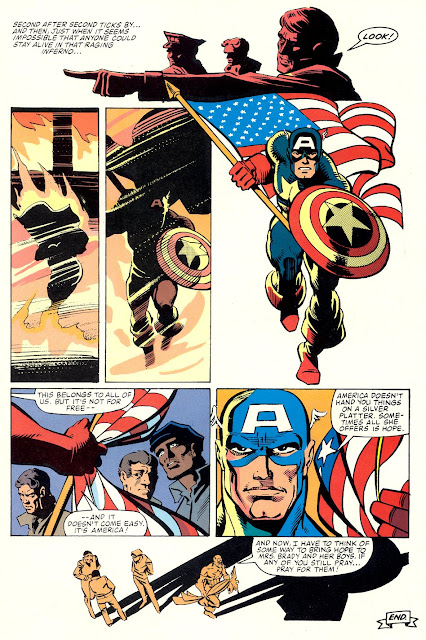 THE REVIEW:
Well now.  That was. . .interesting.

Like I said in the introduction, I'm a flag wavin' kind of guy and I don't mind a little "AMERICA $%&# YEAH!" in my comics, but this was pretty darn close to the line where patriotism becomes nationalism.  I can sort of understand why this story has never been reprinted anywhere.

Okay, it's not a BAD story.  Let's get that straight.  It's well-written and illustrated, and it's a decent little tale as far as the framework of it goes. . .but the amount of American flag draped over that framework is enough to make even a conservative Marine Corps veteran like myself take a step back and raise an eyebrow at it.  It's just a little too preachy and "in your face" for my taste.

While the story may have a mild whiff of jingoism to it, Frank Miller's art is great!  Miller's earlier art has a heavy John Byrne influence to it and in this story you can definitely see it on full display. . .especially in images like the one of Captain America saving the flag from the burning building.  I like the traditional style and sharp, clean lines Miller gives us here a lot.

It's a strange little relic tucked away in a strange little place.  It's not a bad story, but if you are even a LITTLE left of center politically, you'll probably want to steer clear of this one because it is so "AMERICA %$#@ YEAH!" that even a conservative guy like me found it a bit much.
The star of the show here is Frank Miller's artwork.  If you're a fan of Miller's and want to check out some of his more traditional Byrne-influenced art on his only Captain America story, then definitely pick this one up.  It's never been reprinted, so you'll have to hit the bargain bins or ebay to find it.  Even ComiXology skips this issue entirely in their digital collection of Marvel Fanfare.
Up Next. . .
I think there's still time in July to squeeze in another Captain America entry.
Not sure which one, though.  I've got three or four in mind to choose from.
Be there or be square!