Comic Book Realm. . .I love ya.  But your word filter is a pain in my rear sometimes, especially in a review of a WWII comic with lots of N-azis in it.  Oh well. . .guess I'll have to go back through and change them all to Ratzis (with credit to my grandpa - RIP- because that's what he always called them).

Welcome back to Longbox Junk, where the comics are cheap and the opinions are free!

I'm continuing my flag-wavin' month of July theme with another Captain America one shot.  We started off with a mild bit of social justice (and there's nothin' wrong with a little of that), but this time out we get Cap in his full on wartime Ratzi-Punchin' mode.

Captain America was MADE to punch Ratzis and in this one, punch Ratzis he does. So fair warning: If you don't like Ratzi Punchin' stories, you might want to skip this one. . .but if you do, then travel back to the days of WWII with me for a look at Captain America's first field combat test.

Does everything go as planned? What do YOU think? 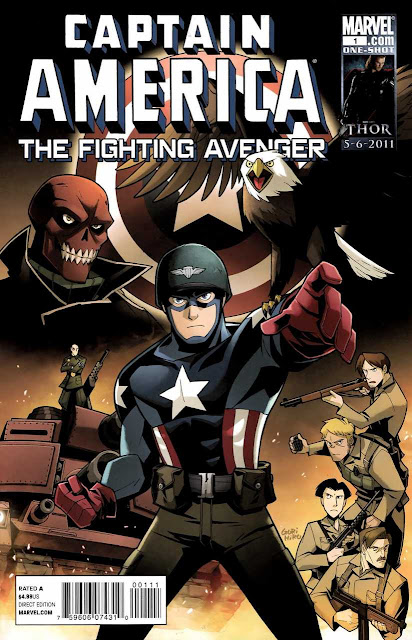 SCRIPT: Brian Clevinger
PENCILS: Gurihiru
COVER: Gurihiru
THE COVER:
I REALLY like this cover!  It has a sharp and clean "animated" look to it and I'm sort of a sucker for Cap in a more rugged combat gear look for his early adventures.  His costume under the G.I. gear is an unusual look, but a good one.  The screaming eagle on Cap's arm IS just a touch too much "AMERICA, $%#@ YEAH!", but since I'm a flag wavin' kind of guy and it's July, I'll just chuckle and give it a pass.
THE STORY:
Our story begins in Germany, 1942.  We are introduced to a highly-skilled four man Special Forces team in the middle of a covert operation. . . 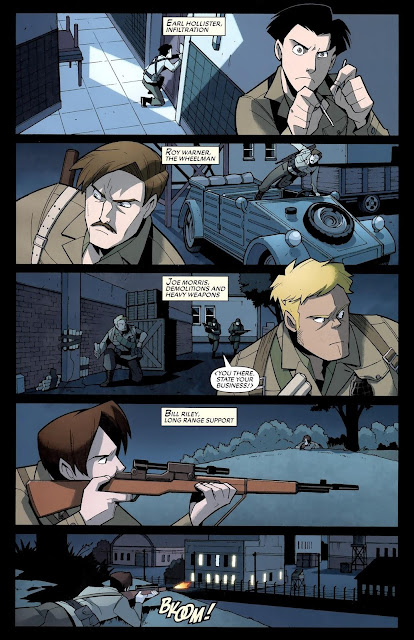 Later, at headquarters, the team is informed that they will be taking a secret weapon out for a test run.  That secret weapon is America's new super-soldier, who has completed his military training but has never been tested under actual combat conditions.  The team reluctantly accepts their orders and begin planning their next mission. . . 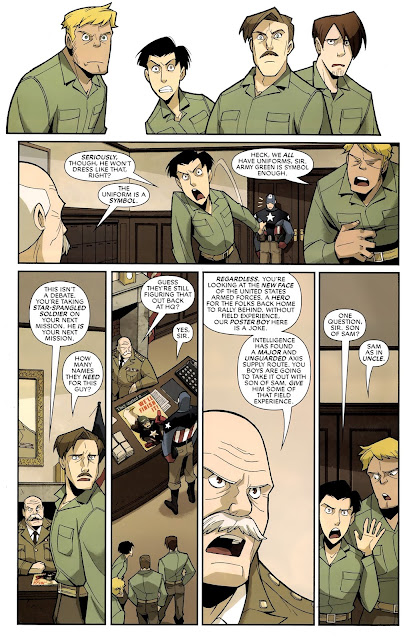 Not long thereafter, the team (as well as their unwanted new member) parachute behind enemy lines into Germany for what seems to be a simple mission. . .blow up an unguarded bridge.  The veteran close-knit team relegate their Super-Soldier to lookout duty as they prepare to accomplish the easy mission at hand. . . 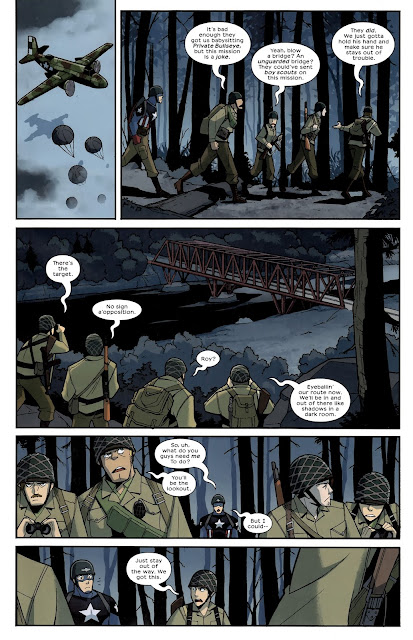 Unfortunately, the unguarded bridge is a trap!  Ratzi Panzers take the unit by surprise!  As the Germans take the team prisoner, Captain America springs into action, providing them with a distraction that enables them to escape and take control of one of the Ratzi tanks. . . 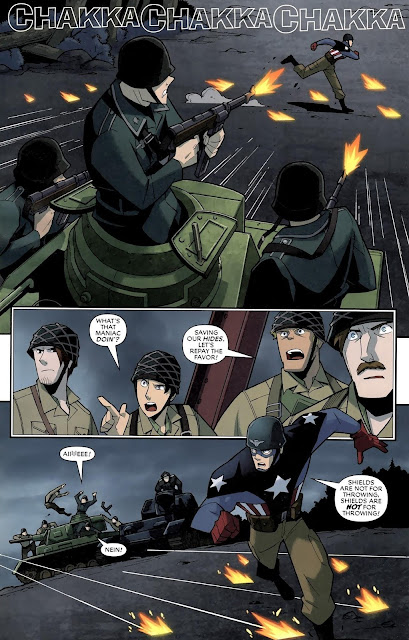 Between the team with their captured tank and Cap's attacks, the German unit is quickly subdued.  Unfortunately, their victory is short-lived as Ratzi reinforcements arrive in the form of a gigantic super tank commanded by Baron Von Strucker. . .evil Ratzi scientist and weapon master. 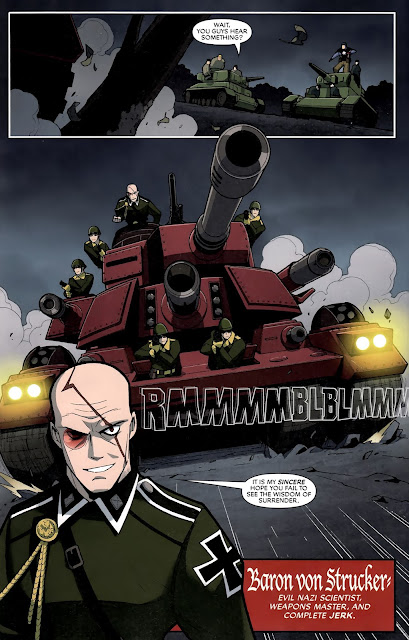 The unit is captured and imprisoned in Von Strucker's headquarters at Hexenhammer Castle, where Von Strucker and his partner, Doctor Schmidt, are intrigued by the seemingly indestructible shield and strange uniform of their new prisoner. . . 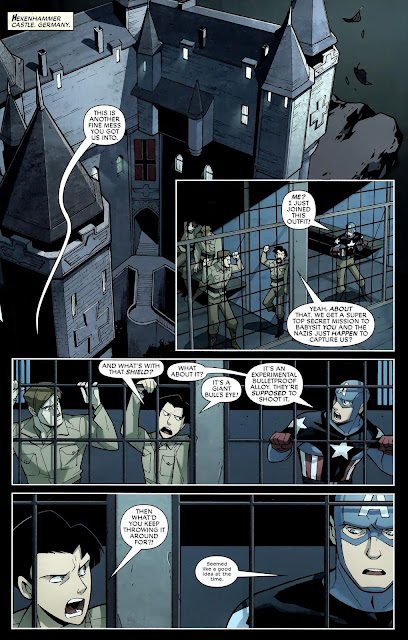 But as the two Ratzi scientists prepare to interrogate their unusual prisoner, the team breaks out of captivity and fight their way to the heart of the castle.  Schmidt leaves Von Strucker in charge of recapturing the prisoners as he flees to the secret laboratory with Captain America in pursuit. . . 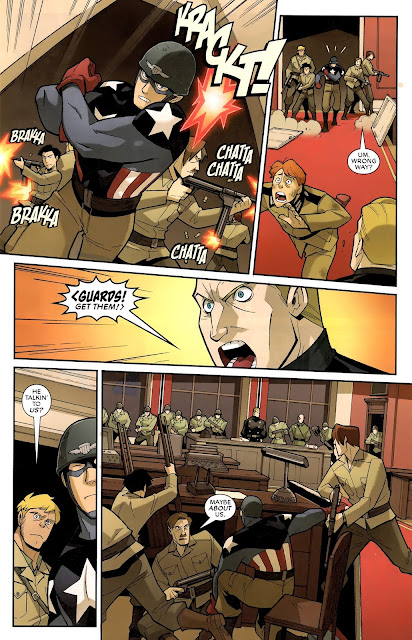 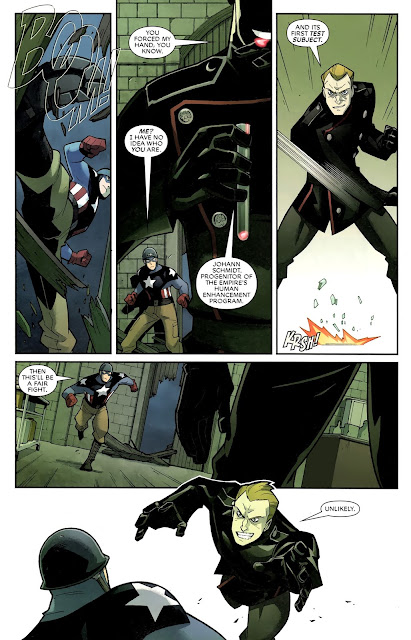 A brutal hand to hand battle ensues between the two Super-Soldiers, and it seems that Schmidt has gained the upper hand. . .but then something goes wrong and he begins to writhe in pain, burning from the inside!  As a horrified Captain America watches, Schmidt's skin burns away and the skeletal figure collapses. . . 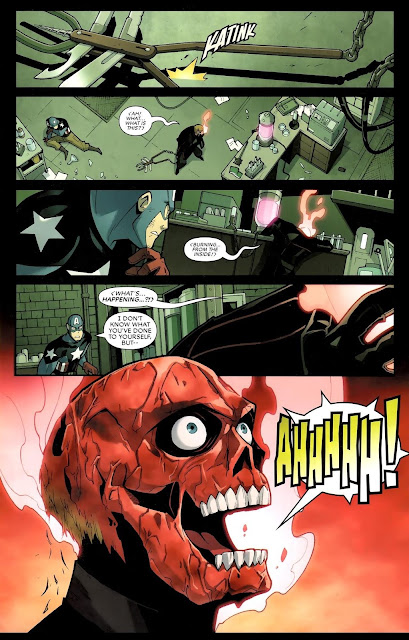 With Schmidt defeated, Cap returns to his team, who have been recaptured by Baron Von Strucker and his men.  Jumping to the attack, it isn't long before they escape again. . .rushing to leave the castle before the explosives planted by Cap in the laboratory go off. . . 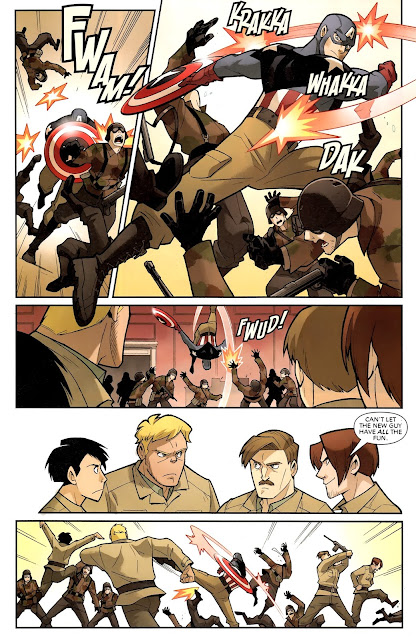 As the team make their escape from the exploding castle, they don't see that Dr. Schmidt is still alive.  Instead, they congratulate their new team member on a job well done. . .even if it wasn't exactly the job they set out to do. 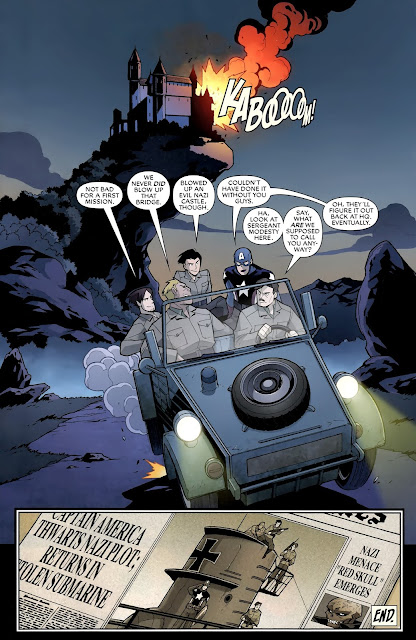 The End. . .or is it?
THE REVIEW:
All right, all right. . .not bad!  You know, sometimes you just want a fun comic with some action and adventure that doesn't get too deep.  This one shot delivers just that in a big way!

The story is simple, with a tried and true "capture and escape" plotline mixed in with some "new guy joins the team and has to prove himself" character building along the way.  But it's well written, with a lot of humor. . .I liked the running gag that Steve Rogers hadn't been named Captain America yet, so nobody knows what to call him. . .and snappy dialogue that moves the story along at such a quick pace that even for a double-sized 48 page one shot, it ends before you really want it to, and end up wanting more.

Between the snappy, humorous writing and the crisp art style (more on that in a minute), what I see MOST in this comic is something that could EASILY be translated into an animated movie or series!  Now that's something I'd really love to see. . .an animated series focused on a very inexperienced Captain America learning the ropes with a gang of goofy veterans.  The Ratzi imagery would likely be pretty problematic, though.  Still. . .it's a nice thought, and that thought is a testament to the solid foundation laid down here making me want more adventures set in Cap's early career.

So let's talk about the art a bit.

As you can see from the scans above, this comic has a pretty unusual art style that really took me by surprise by how much I liked it. It's crisp and clean, with minimal backgrounds and a mild anime influence lending it a very fluid sense of movement and exaggerated facial expressions that REALLY make it seem like one is reading something based on an animated series like the Batman Adventures comics.  Is it the best comic art I've ever seen?  Not even close. . .but it DOES give this comic a really fun feel.

Overall, what we have here is a comic that can be described with one word: FUN.  Like I said at the beginning of the review, sometimes you just want a little fun in your comics and this one delivers big time!
The story is extremely simple and is one you've seen already many a time, but it's well-written, humorous, and moves at a snappy pace.  The art is clean, crisp, and extremely cinematic.  The two come together perfectly to give the reader a fast-paced story long on action and humor and short on depth and drama.
Yeah. . .there's Ratzis , but here they're more stock movie villains than depraved white supremacists.  Basically they're punching bags for the best Ratzi Puncher in comics. . .Captain America.  So like I said in the introduction, if you DON'T like Ratzi Punchin' stories, you'll probably want to skip this one.  On the other hand, if you're just looking for a fun comic with a few chuckles and some good old fashioned Ratzi Punchin' then definitely keep your eye out for this great little nugget of Longbox Junk gold.
Up Next. . .
It's still July, so MORE Captain America!
Let's step back a few decades to 1985 for a tale of Captain America fighting home-grown terrorism. It's Marvel Fanfare #18. . .straight from the dollar box with a mighty patriotic punch!
Be there or be square!