Welcome back to Longbox Junk. . .the blog packed FULL of comic reviews nobody asked me for!

Even though the witching hour draws close, we're still having a bit of Halloween fun here at Longbox Junk by taking a look at some of the spooky stuff hiding in the dark corners of my (and my daughter's) comic collection.

It's been a pretty nice Halloween season here at Longbox Junk if I DO say so myself. So far we've seen Vampires (Vegetarian and otherwise), Killer Easter Bunnies,  A sci-fi take on Jekyll & Hyde, Werewolves, Frankenstein's Monster, Spirits of Vengeance, Prairie Witches, and some generally nasty people doing nasty things (like burying each other alive).  So what's missing here?

Zombies.  We need some zombies!

And so here's some zombies.

What we have here is a fresh chunk of Longbox Junk that's on the stands even as I write this.  I only have the first issue because I basically bought it for the extremely Halloween-y zombie Batman variant cover and somehow have kept missing the following issues.  I'm sure I'll spot the whole set eventually in a bargain bin, but for now I just have this first issue, so let's take a look at it! 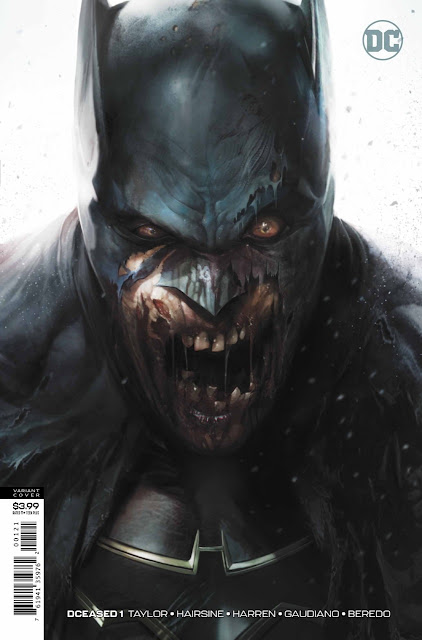 So I bought this thing for the cover. Let's take a look at the cover, shall we?
*shudders* Now THAT's some creep-tastic cover art right there!  Fransesco Mattina outdoes himself with a nightmarish vision of one of DC's greatest heroes gone straight to zombie !  Just look at the detail in things like Batman's nasty teeth and jaundiced eyes.  This is NOT the Batman you want to meet in a dark alley.  Very well done!
That's the cover.  Let's get into the story.

SCRIPT: Tom Taylor
PENCILS: Trevor Hairsine & Stefano Gaudiano (pgs. 1-6, 15-26)
James Harren (pgs. 7-14)
COVER: Francesco Mattina (Variant)
The story goes like this. . .
We begin with the Justice League defeating Darkseid and forcing him to leave after he invades Earth. But as he goes, Darkseid gives the League an ominous farewell that doesn't quite sit right with the heroes. . . 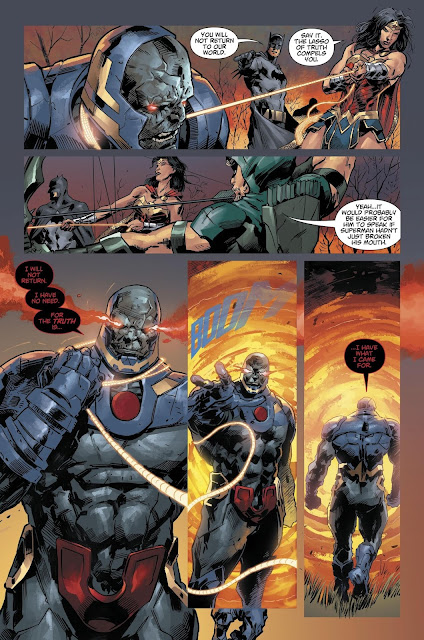 Indeed, all is not as it seems.  Darkseid's invasion was merely a distraction.  His true purpose was to capture the hero known as Cyborg. . .now held prisoner on Apokolips.  Darkseid's search for the Anti-Life Equation has led him to believe that the second half of the Equation rests in Cyborg's technology. . . 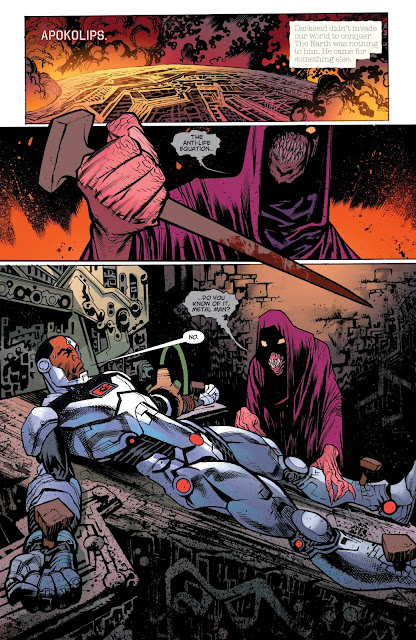 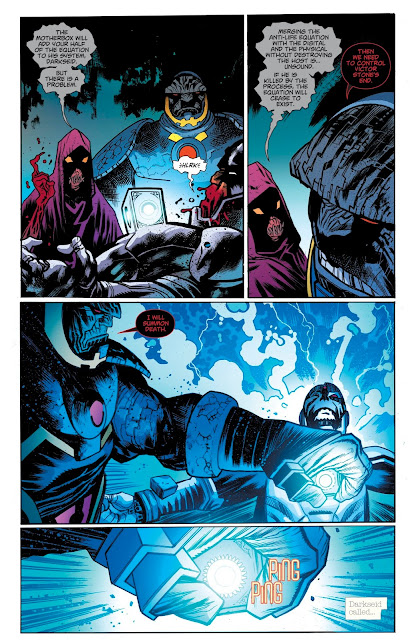 The change that Darkseid makes to the Anti-Life Equation has disastrous effects as the corrupted Equation combining the physical and technological drives Darkseid insane.  Desaad quickly transports Cyborg back to Earth to try and stop the spread of the Techo-Organic Virus, but he's too late.  An insane Darkseid destroys Apokolips. . . 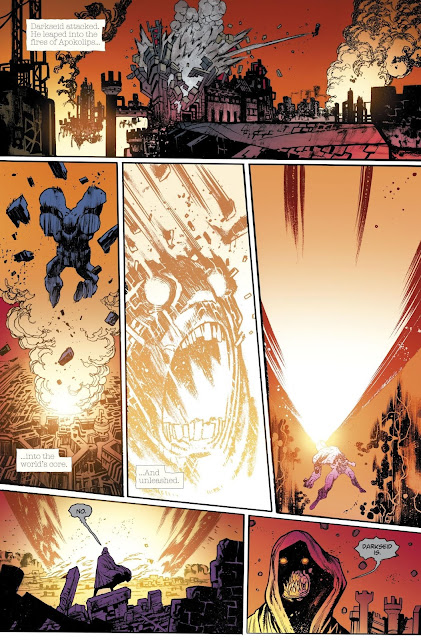 Cyborg reappears on Earth in Metropolis, and his internal systems immediately connect him to the internet and all surrounding online devices.  Cyborg is horrified to see the Techno-Organic Virus he's infected with begin to quickly spread among the people nearby.  He is unable to do anything to stop the Virus as people begin to go insane and tear each other apart. . . 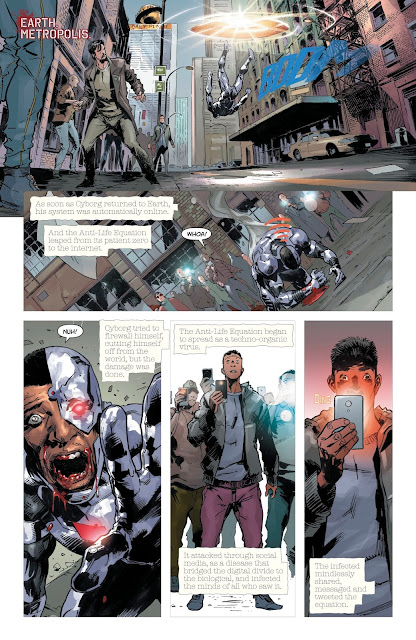 In the meantime, Superman is putting together a plan with Big Barda and Mister Miracle to rescue Cyborg from Apokolips, not knowing that Cyborg has already been sent back by Desaad.  He hears the screams of people from the street and sees the spreading insanity.  Realizing  that the situation is already out of hand and getting worse, Superman rushes to his wife and son. . . 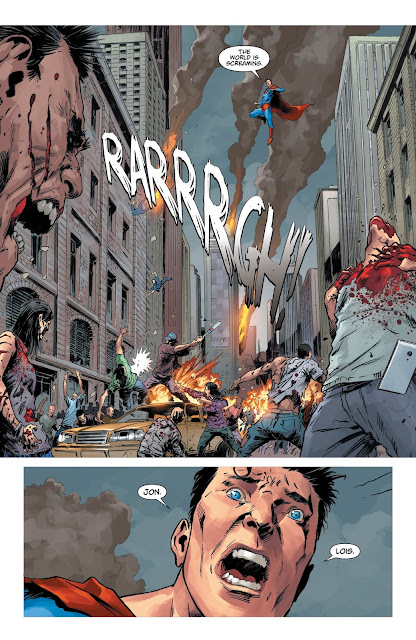 While Superman is busy saving his family from the spreading madness, the scene shifts to the Batcave, where Batman is monitoring the situation on isolated systems safe from the Techno-Organic Virus. . .and the news isn't good.
The computer estimates that there are ALREADY 600 million infected people, and at the current rate of spread BILLIONS will be infected in a matter of days.  This is definitely a problem Batman can't punch a solution to! 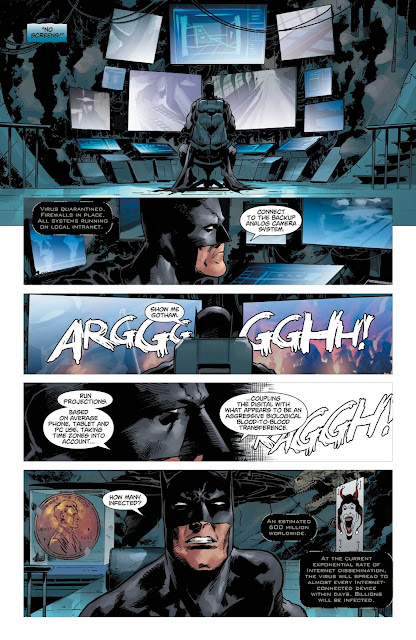 Batman quickly sets off an EMP pulse in Wayne Manor above, but he's too late.  As the Dark Knight heads upstairs to check on things, he is attacked by an infected Nightwing and Robin (Tim Drake)! 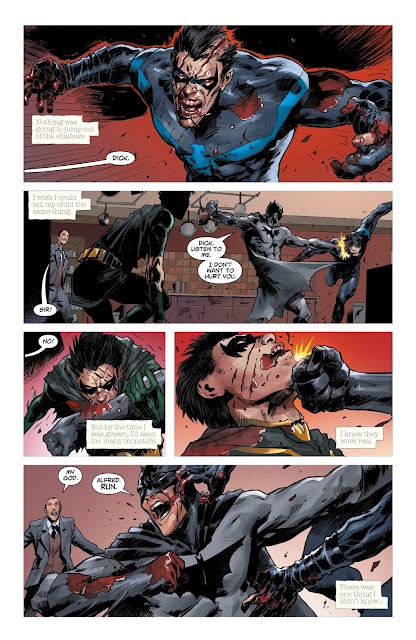 After a brutal battle with his infected partners, Batman orders Alfred to escape and we are left with a cliffhanger scene of Batman being bitten by Nightwing. . . 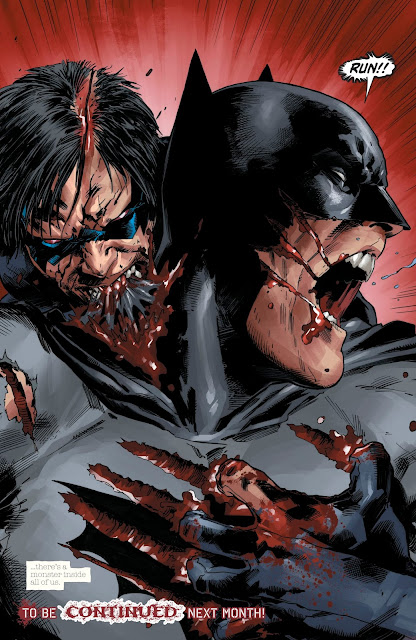 The End.
Okay then.  There it is.  It's not a "Dead Rising Up And Slowly Wantin' To Eat Your Braaaaaains" sort of zombie apocalypse.  More of a "Virus Driving People Insane Enough To Kill You, So RUN!" sort of thing.  Despite the unique connection to the DC Universe by having the virus originate as a corrupted form of the Anti-Life Equation, it's still. . .well. . .it's just another zombie apocalypse.
Don't get me wrong.  It's not bad.  It's actually pretty good and makes me want to pick up the next issue.  The idea of a zombie apocalypse in the DC Universe IS an interesting one.  It's just that, do we REALLY need more zombies?  Okay, sure.  There's superheroes in this zombie story.  But really, hasn't that also been done before?
There's going to be inevitable comparisons between this and Marvel Zombies. . .but from what I've read of Marvel Zombies (which admittedly isn't very much, just a few issues here and there), they are two different things.  Sort of like how there's a definite difference between a Corvette and a Pickup Truck even though at the heart of it, they're both basically automobiles.  So despite what you may think, DCeased is NOT a copy of Marvel Zombies.
The writer does a fine job.  I want to see what happens next.  There's nothing wrong with the writing.  The art is good, but not great.  I actually enjoyed the chunkier, darker look of the art during the Apokolips sections. . .it reminds me of the artist everyone else hated on the recent X-Force series that I liked (Dylan Burnett) enough that I pulled out an X-Force issue to see if it was the same guy.  I guess I just like that chunky, dark sort of style.
So nothing wrong with the writing or art.  It's just. . .zombies, I guess.  Maybe they could have told the story of a Techno-Organic Virus destroying the world without zombies? Maybe? I think they could have.

What we have here is a well-written story with a DC Universe-specific angle on the extremely well-worn framework of a zombie apocalypse backed up with some good art.  It's interesting enough for me to want to get the next issue, but not interesting enough to make me want to order it if my local shop doesn't have the next one sitting there.
If you're a fan of zombie stories, then definitely pick this one up.  If you're getting a bit tired of zombies then this isn't really something you'll miss out on if you don't read it.  If you don't like zombie stories in the first place, then this won't change your mind one bit.
Up Next. . .
I think there's still time for at least one more piece of Longbox Junk Halloween fun!
Be there or be square.