Welcome back to Longbox Junk, the place to find comic book reviews nobody asked for!
There's still a couple weeks left in October, so we're still having some Halloween fun here at Longbox Junk by looking at some of the spooky things hiding in the dark corners of my (and my daughter's) comic collection.
This time out, we have a Dark Horse one shot adaptation of a couple of Edgar Allan Poe's shorter works written and illustrated by comic legend Richard Corben.
If Halloween were to have a central figure. . .a mascot, if you will, like Christmas has Santa Claus or Easter has the Easter Bunny, or. . .er. . .okay, that's all I can think of.  ANYWAY. . .if Halloween were to have its own mascot, in MY extremely humble opinion it should be the grumpy ghost of Edgar Allan Poe.
For the sake of TRYING to keep my introductions to a manageable length I won't go too far into the history of Poe. . .he basically lived a short, tragic life and died a mysterious death, leaving behind a body of some of the darkest literature ever written that is now regarded as the work of a mad genius, but was mostly ignored during his lifetime.

Poe's life story is one of heartbreak, death, poverty, and unappreciated genius.  If you really feel like loving the life you have, then read Poe's life story and then thank you aren't him.
SO. . .
We have an undisputed comic book legend adapting two short tales by one of the undisputed masters of dark and creepy literature.  How can this NOT be good?  Let's take a look! 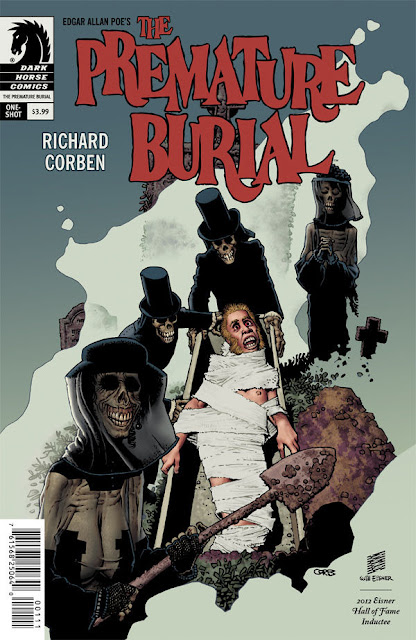 SCRIPTS: RICHARD CORBEN
PENCILS: RICHARD CORBEN
COVER: RICHARD CORBEN
There's two stories in this one-shot and, as you can tell from the credits above, this is pretty much a one man show with Richard Corben wearing all the hats.  Before we get into the comic, let's take a brief look at the cover. . .
Now THAT'S a Halloween cover!  I love Corben's use of negative space to frame the ghoulish scenario in the center.  The dreary colors highlight the living flesh of the man in the coffin as well as the title.  The supreme attention to detail in things like the terror in the eyes of the living man lets you know before you even open this comic that there's a master at work here.
Wait. . .did I mention I'm a big Richard Corben fan?  No?  Well there it is, then.  This isn't Corben's best cover ever, but it's still a great cover.  Let's get inside.

We begin the tale in a graveyard where Lucian and his fiancee, Victoria are having a picnic.  Victoria rebuffs Lucian's advances and leaves him without realizing that Lucian has given her poisoned wine.
Appearing dead, Victoria is buried in the same graveyard.  Lucian digs up her grave the night of her burial, but Victoria wakes up as he is groping her body.  In a panic, Victoria flees and Lucian hits his head on a gravestone as he tries to pursue her. . . 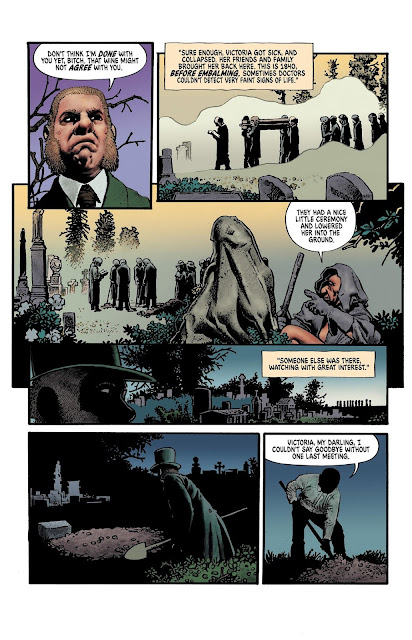 A funeral is held for Lucian as the blow to his head has made him appear dead as well, but Victoria realizes he's not actually dead and hires the gravediggers to dig the terrified man who has been buried alive back up. 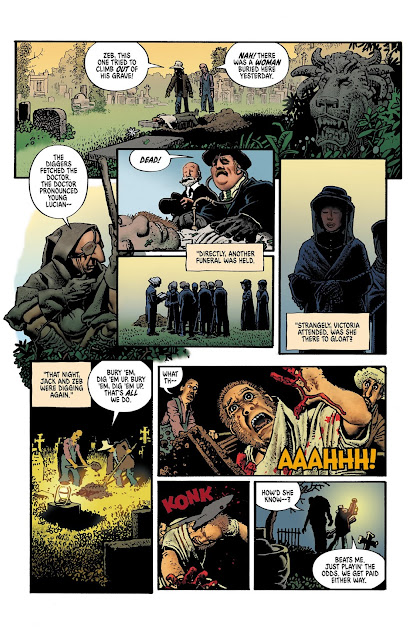 As Lucian recovers from his ordeal, he is informed by his outraged father that Victoria has told him exactly what happened and that, for some reason, she still wants to marry Lucian.  The two are married, but Lucian can't find happiness because he's become obsessed with his short time of being buried alive. . . 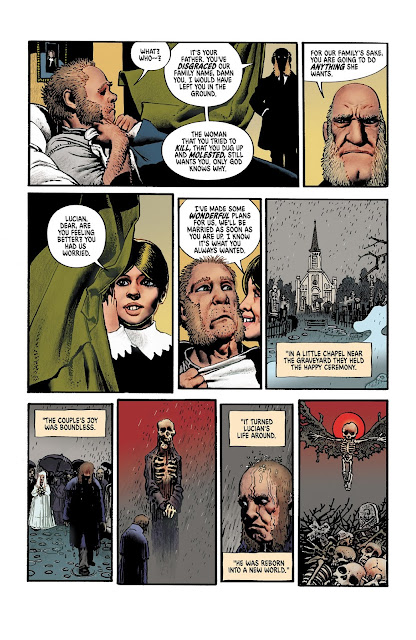 As Lucian sinks deeper into his obsession with being buried alive again, he takes many precautions to avoid that horrible fate. . .an above-ground tomb with a bell he can ring, a coffin that comes easily apart, a supply of food, and so on.
Even so, he finds himself unable to sleep, terrified that he will wake up in a coffin again.  Victoria gives him tea so that he can sleep, but he finds himself having a horrible nightmare of being buried alive. . . 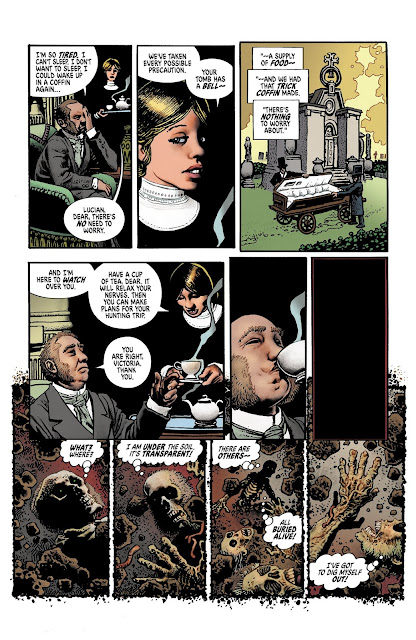 In Lucian's nightmare, he wanders a hellish landscape of the tormented dead who have been buried alive.  Their screams are relentless.  He spots Victoria and runs to her, hoping she can help him escape the nightmare. . . 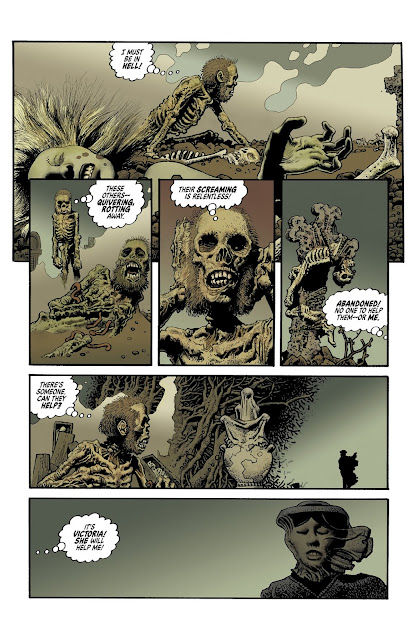 But instead of helping him, Victoria grins wickedly and ignores his cries! 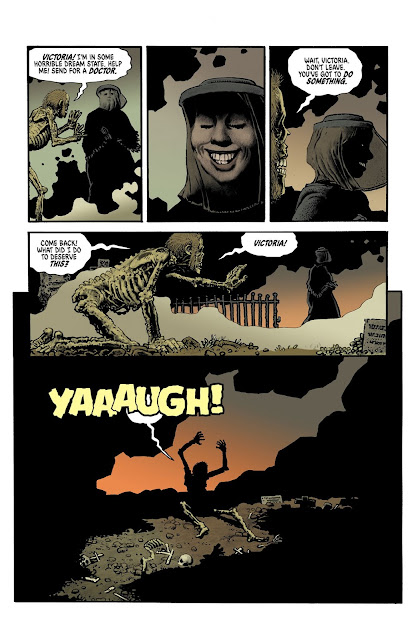 Lucian's worst nightmare comes true as he wakes from his dream confined in a coffin!  But he is quickly relieved to hear another voice as he realizes he's not in a coffin, but in a small berth aboard a ship he is travelling on for a hunting trip.
Relief turns to horror as Lucian realizes the truth. . .the ship is a fantasy and he is indeed buried alive after being drugged by his wife. 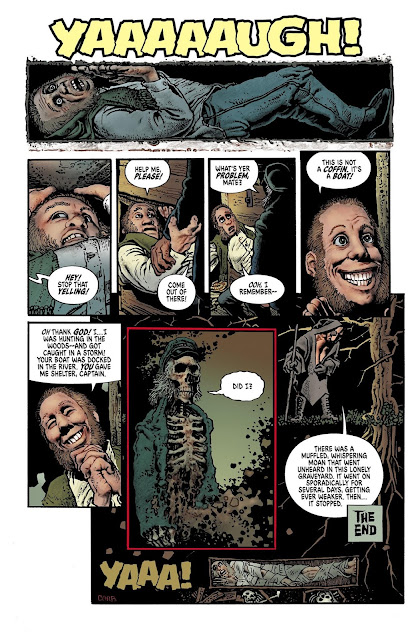 The End.
For those who haven't read Poe's original "The Premature Burial", it's less of a story and more like what one would hear at a lecture, the sort of which were popular entertainment in his day.  An introduction to the subject, several short examples, and then the speaker's personal experience.  It's a very matter-of-fact piece, compared to Poe's other tales, and there's actually not much narrative to it at all.
What Corben has done here is to meld the various elements of the original piece together and add to them in order to create an actual story out of what is more of a dry lecture on Premature Burial.  So this becomes less of an adaptation and more of a re-imagining.
For someone who's read Poe's work many times such as myself, this is a fantastic interpretation of what is really one of Poe's less memorable works.  The moving and combining of the separate elements of the original by Corben in order to make an actual story out of them is brilliant.
Corben's reliably outstanding artwork is in top form here.  The wicked grin of Victoria as Lucian realizes she's purposely buried him alive is probably the creepiest thing in the entire story.  Corben's use of the comic panel itself as Lucian's coffin on top of the final page is another standout moment, as is the small image of the terrified Lucian enduring his awful fate at the bottom of the final page.
What we have here is a fantastic re-imagining of one of Poe's less memorable works, backed up with some top-notch art by one of the most legendary comic illustrators in the business.  I can find nothing wrong with this chilling little tale.

THE CASK OF AMONTILLADO

We begin our tale with the Lord Montresor leading the widowed Madam Fortunato into his family crypt, promising to shed some light on the mysterious disappearance of her husband nearly 50 years ago. . . 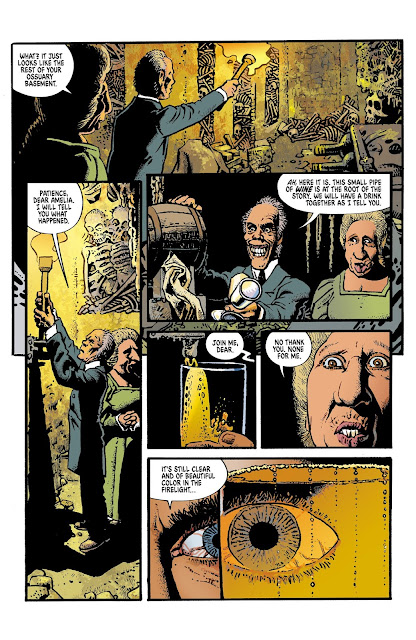 Montresor tells her that many years ago, he found her drunken husband celebrating at a carnival and invited him to his home. . .to the very crypt they are in. . .to sample some Amontillado wine, for her husband was a great lover of rare wines. . . 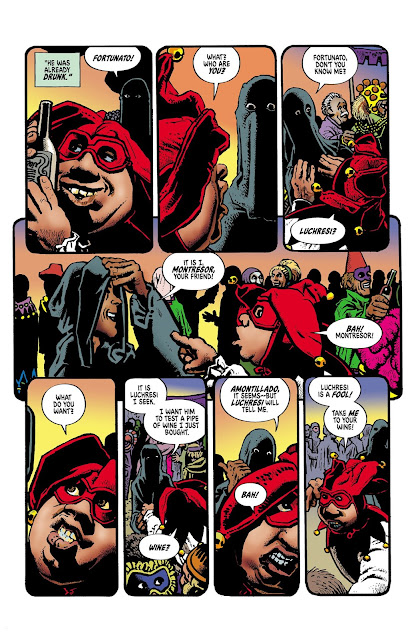 As they traveled deeper and deeper into the depths of the crypt beneath the Montresor Pallazo, her husband was offered several times to turn back, but Fortunato greatly desired to sample the Amontillado, and so the pair pressed on, deeper into the crypt. . . 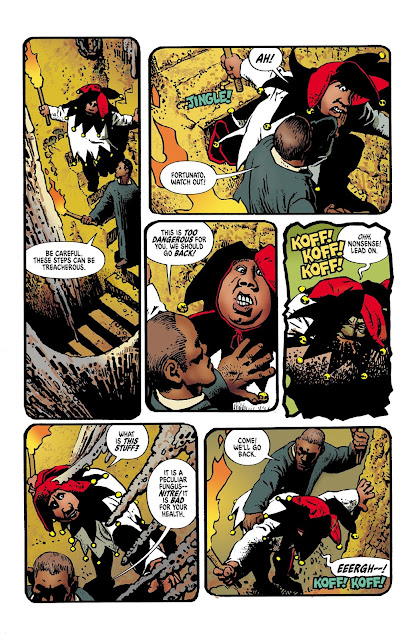 Finally, Montresor led Fortunato to a small alcove, promising the Amontillado was within.  But there was nothing in the alcove but a chain, which Montresor quickly used to bind Fortunato within the dark alcove. . . 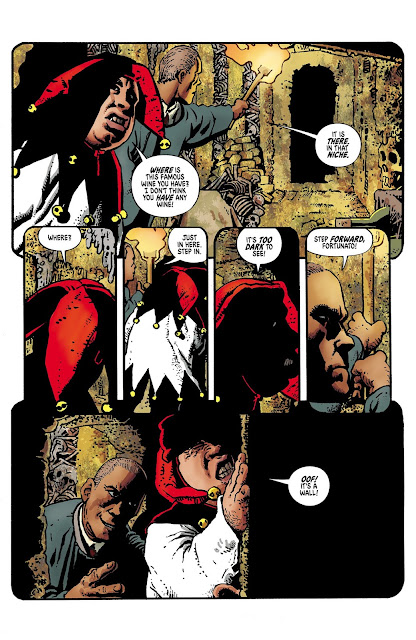 Once Fortunato was securely confined, Montresor began to brick the alcove up.  Fortunato thought Montresor was playing a cruel joke right up until the time that Montresor placed the final stone. . .burying Fortunato alive within the walls of the very crypt they now stood within, and where Madam Fortunato's missing husband has been for the nearly 50 years since! 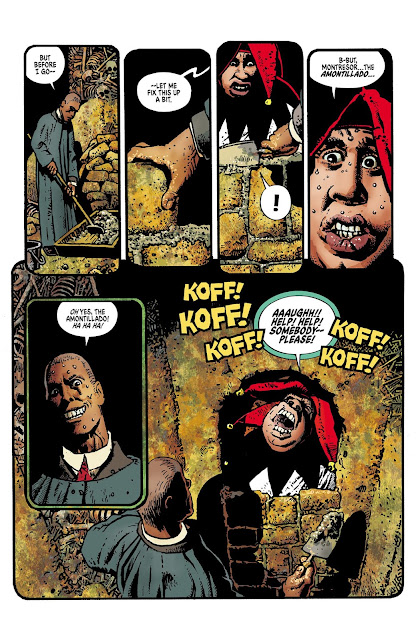 Madam Fortunato is understandably horrified by Montresor's confession.  She demands to know what her husband did that so wronged Montresor that he did such a thing.  Montresor thinks a moment, but is unable to remember! 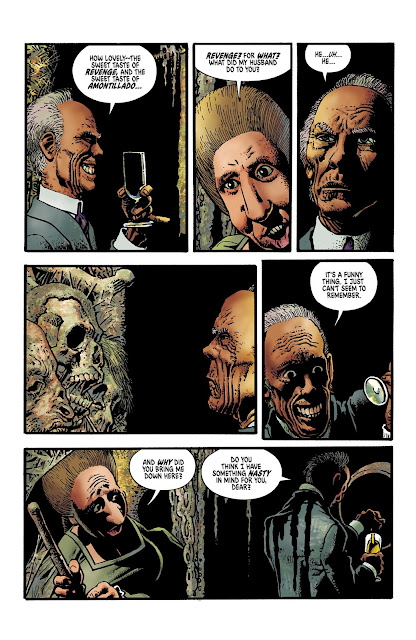 Montresor explains to the horrified Madam Fortunato that he merely wanted someone to know the truth after all the years had passed, and that he has come to the crypt to die. . .a glass of poisoned wine and Montresor falls dead beside the tomb of Fortunato. 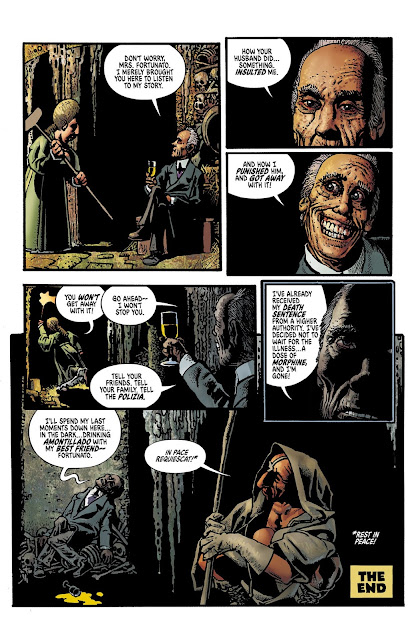 The End.
"The Cask of Amontillado" is one of Poe's better known works, and one of my personal favorites.  It's basically a very short, very simple tale of one man luring another into a crypt and walling him up alive.
What Corben does here is add a framing device to add more depth to the original tale.  In the original story, beyond vague insinuations of insult, it's never explained WHY Montresor walled Fortunato up.  Here, the lack of explanation becomes truly horrible as Montresor confesses to Fortunato's widow that he can't even remember why he killed her husband in such a cruel way.
It's a brilliant touch by Corben that makes a great story even better!  The confession of Montresor becomes even more horrifying than the deed itself, due to the absurdity of his not even remembering why he did it.
The art in this story is simply fantastic!  This is a tale that has very little action or supernatural elements to it, so facial expressions need to do a lot of the heavy lifting.  Corben delivers in a big way here.  Fortunato's manic grin as he walls up Fortunato, as well as the insanity in that same grin as he makes his confession are real standout moments in a story full of great art.
What we have here is a brilliant expansion on an already great story, backed up by some extremely detailed and creepy art focusing on facial expressions.  For me, THIS is the definitive adaptation of Poe's classic tale.

If you're looking for a good horror comic, look no further.  You won't find gore or monsters here, but what you WILL find are two creepy little stories of madness and revenge that use the primal fear of being buried alive as their foundation.
In the first, we have a brilliant re-structuring and re-imagination of what is otherwise one of Poe's less memorable works, turning it from a dry lecture and into an actual story.
In the second, we have more of a straight re-telling of a classic story, but with an outstanding framing device that makes an already great story even better.
In both we have incredible artwork by one of the undisputed legends of comic art.
If you are a fan of horror comics, Richard Corben, Edgar Allan Poe, or any combination of those things, then do yourself a favor and grab this comic if you happen to spot it in the bargain bin.  It's pure Longbox Junk Halloween gold.
Up Next. . .
MORE Halloween fun!  That's right. . .MORE!
Be there or be square.