We're still having a bit of Halloween fun here at Longbox Junk, spotlighting some of the spooky stuff haunting my (and my daughter's) comic collection.  This time out, we're going into the lighter side of horror with Count Duckula!

FAIR WARNING:  I'm going to digress a bit here before getting into the comic at hand.

As far as I'm concerned one of the best parts of comic collecting is the ability of a simple floppy stack of stapled paper to transport me back to various periods of time. . .I like to call it "The Paper Time Machine".  This Count Duckula comic book took me back in a big way.

I don't have a personal connection to this particular issue.  It came from my daughter's collection.  But as I was looking through it, I was brought straight back to the very beginning of my days as a bargain bin hunter.  See, before my daughter was old enough to start enjoying comics, I mostly collected what was new on the rack or what I had on subscription.  I pretty much ignored the back issue boxes.

But when my daughter got to be about 4 or 5 years old, that changed when I decided to find some cheap comics for her that I wouldn't mind if she banged them up a bit.  My thinking was to get her interested first and teach her how to take care of them later.  So I began my long career as a "Longbox Junker" digging through bargain bins for Richie Rich, Archie, Casper, Bugs Bunny, Mickey Mouse, and any other bright comic aimed at kids I could find for a quarter. . .and here we are now.

My daughter is 25 now and she's the Marvel fan of the two of us (I'm more of a DC guy).  Getting deep into the convoluted continuity of Marvel's connected superhero soap opera is definitely her thing. . .but it all started with comics like this one.  Just looking at this comic brings me back to the days of us sitting together on the floor of her bedroom. . .me with my new comics and her with a handful of  cheap Richie Rich comics after dinner on Wednesday nights.

It's amazing to me remembering how something so inexpensive and simple as a Casper The Friendly Ghost comic from the quarter bin could bring my young daughter such happiness.  What's even more amazing to me now that she's older is discovering (while digging through her collection looking for good Longbox Junk) that she still has so many of those comics I bought as throwaways!

They're worthless for all intents and purposes.  Heavily read. . .some of them with covers detached, some with Kool-Aid stains, corners bent, just all sorts of damage.  But she has them just as carefully bagged and boarded as the most valuable comics in her collection!  When I pulled this Count Duckula comic from the box to do this review, she told me to be careful with it, even though it's probably not even "worth" a dollar.

And so even though the pages are barely hanging onto the staples, I treated this comic like a Silver Age collector item. . .because to my daughter, it's valuable.  Her telling me to be careful with this "worthless" comic reminded me in a BIG way that sometimes the value of a comic has nothing to do with how much money it's worth.

The comic at hand is one that I bought at some unknown point in the past for my daughter.  I assumed on first look (based on the cover)  that it was from the Warner Bros. stable of characters because the main character looks sort of like Daffy Duck or someone related to him.  But as I said above, in those early days of Longbox Junkin' I just pulled anything that looked good for kids from the quarter box.  I never actually READ any of them beyond a quick flip in the store and maybe a little reading together with my daughter if she needed help with a word or wanted to show me something funny.

A quick bit of research shows me that Count Duckula is actually a character based on a British cartoon series I've never heard of called "Danger Mouse", and has nothing to do with Disney or WB.  So this comic and the main character is as new for me now as it was for my daughter all those years ago.  Let's do it! 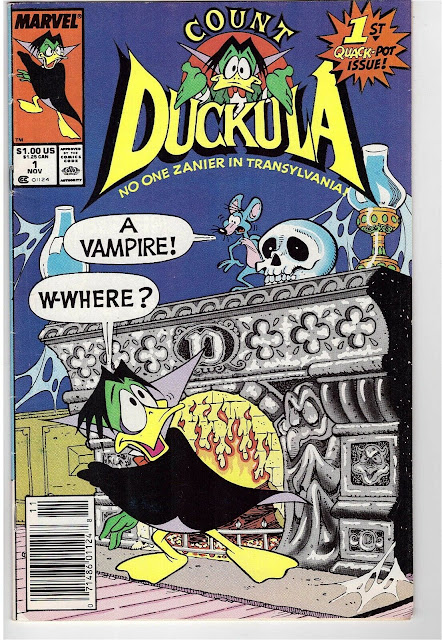 COVER: Warren Kremer
As usual, let's take a look at the cover first. . .
It's great!  I like it a lot.  On first glance, it looks like Duckula is one of the Warner Bros. gang.  Between that and the short gag you get before you even open this up, you can tell this comic is going to be on the "wacky" end of the comedy dial, so it does a perfect job of selling what's inside the comic right off the bat.  The colors are also great, with lots of eye-catching and contrasting reds, blues and yellows mixed in with splashes of green on the main character.
Overall, this is a really fun and colorful cover that catches the eye and perfectly sells what's inside.
Moving along. There's two stories in this issue, both by the same team.  Let's take a look. . .
A MINOR FOWL-UP
SCRIPT: Michael Gallager
PENCILS: Warren Kremer

Our story starts with the origin of Count Duckula.  A ceremony to resurrect Count Duckula is "fowled" up when the housekeeper of Castle Duckula substitutes catsup for blood during the ritual, accidentally creating the first vegetarian vampire! 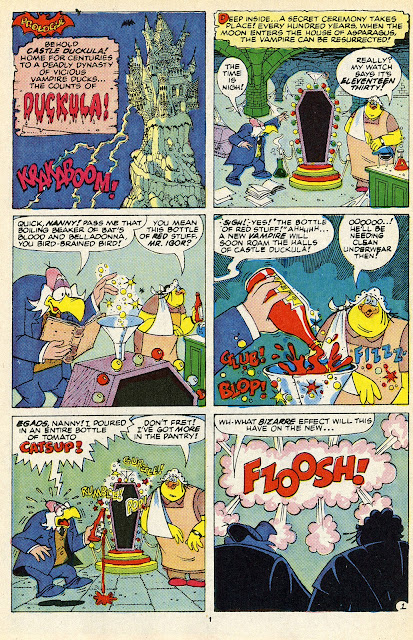 As the new Count Duckula discovers his musical talents, the sworn enemy of the Duckulas, Vampire Hunter Doctor Von Goosewing hears the sounds from the supposedly empty castle and investigates.  Hijinks ensue as he falls victim to his own clumsiness and the pitfalls of the castle. 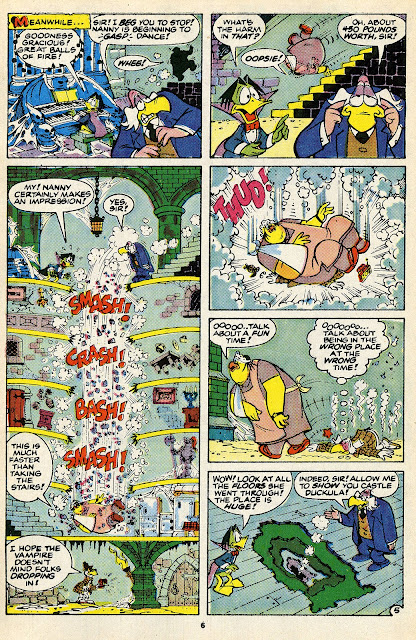 In the meantime, Count Duckula's butler tells him about Castle Duckula's ability to magically teleport anywhere in the world, and that it will always return to Transylvania before sunrise.  Count Duckula accidentally transports the castle to Outer Mongolia, where he, the butler, and the housekeeper are quickly captured by Attila The Hen and her Hen-Chmen. . .who decide to cook and eat the three of them. 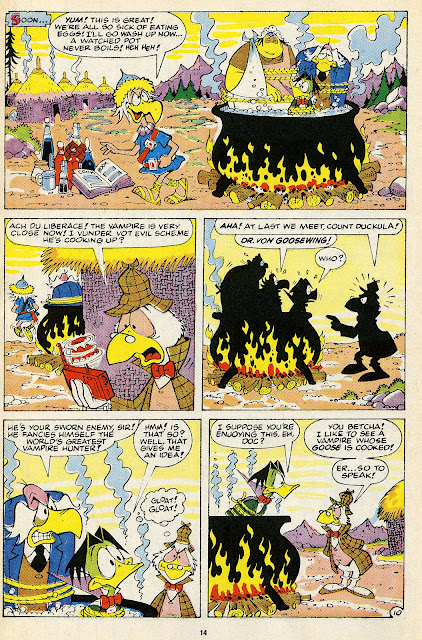 It's Count Duckula's arch-enemy, Doctor Von Goosewing, who saves the day because HE wants credit for destroying Count Duckula.  He frees the trio of prisoners and they all return to Transylvania.
The End.
On looking at my synopsis, I realize its sort of hard to describe a zany story where puns, one liners, and physical comedy fill every single panel!  There's not a single bit of wasted space in this story.  The writer and artist cram as many gags as they can into every bit of this, and I love it!  It definitely has more of a Warner Bros. fast-paced "wacky" style than Disney, and that's more my speed of cartoons. . .where the jokes come fast and furious and never stop.
Sure, this is written for kids.  But like the best of the old cartoons, adults can find fun in this as well.  Not all of the gags hit the target, but enough of them do to make this first story a good read.
NEXT!
LIGHTS! CAMERA! TRACTION!
SCRIPT: Michael Gallager
PENCILS: Warren Kremer

Count Duckula decides he wants to be a movie star, so he teleports Castle Duckula to Hollywood.  At Alfred Peacock Studios, Duckula gets his big break when a message he delivers to the famous director makes leading man Bird Reynolds run off the set. 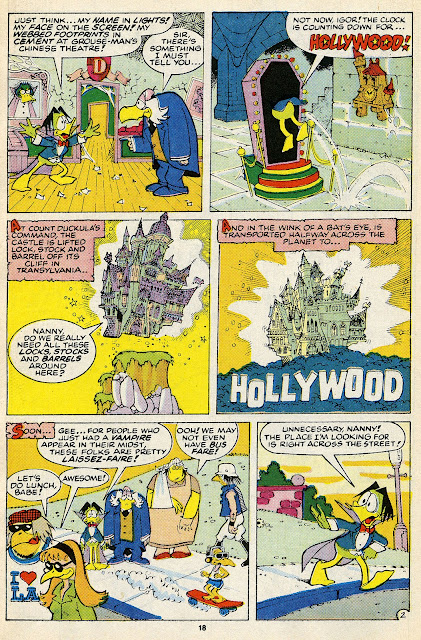 Count Duckula presents himself as Bird Reynold's stand in and with a bit of movie magic and makeup, Duckula becomes the spitting image of the famous actor.  Unfortunately, the reason Reynolds left becomes clear when his co-star, John "The Duke" Crane arrives on set. . .furious at Reynolds for going out with his girl. 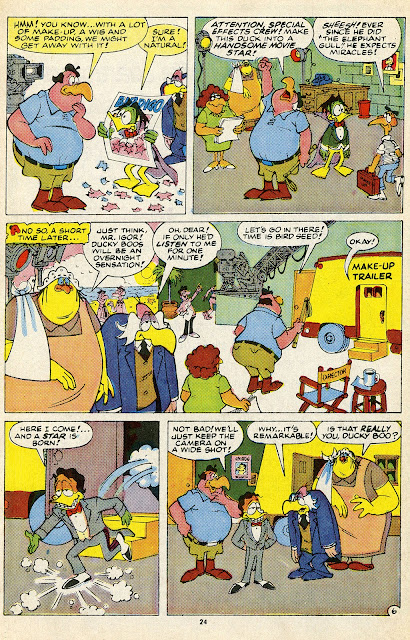 Hijinks ensue as John Crane mistakes the made up Duckula as Bird Reynolds and he chases him around the movie set, much to the delight of Alfred Peacock, who thinks the two of them are improvising a chase scene.  Duckula finally makes it back to Castle Duckula and escapes back to Transylvania. 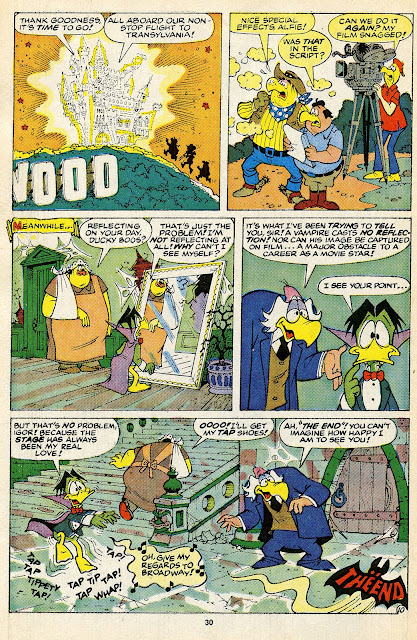 The Butler, Igor, gives Count Duckula the bad news. . .Vampires can't be filmed.  But despite his Hollywood dreams going down the drain, Duckula is determined to be a star. . .next time on Broadway!
The End.
Like the first story, this one doesn't waste a bit of space.  The writer and artist work together to fill every panel with gags and give the reader fast-paced, zany, mistaken identity chase shenanigans.  I'm thinking this might be a running theme in Count Duckula because the second issue also follows the mistaken identity form (My daughter has 3 of these) in a very similar way.
Once again, it's sort of hard to do justice to a story filled with constant art and story gags when trying to do a synopsis.  So I'll just say that once again, the gags don't all hit the mark, but the ones that do make this a fun read for all ages.

I think that this is actually the first pure "kid" comic I've reviewed here in Longbox Junk.  I took away a couple of interesting things:  First is that it's kind of hard to write a synopsis of these sort of gag-filled stories that doesn't sound a of a lot worse than the actual story.
Second, I learned that (like a good classic cartoon short) just because something is aimed toward a younger audience, that doesn't mean there isn't some fun for adults too.  This comic was packed SO full of visual and written gags that there's a little something for everybody in here.
This comic was pretty far outside my usual zone, so I hope I at least did a decent job reviewing it.  The bottom line is that, even though it's written for kids, this was a fun read packed from end to end with zany gags.   It's not the greatest comic I've ever read, but it's far from the worst.  If you spot it in a bargain bin definitely grab it if you have a young kid who likes comics.  But be sure to give it a read yourself first!
Up Next. . .
It's still October, so that means MORE Halloween fun!
Be there or be square.