Welcome back to Longbox Junk, where you can find more comic reviews you never asked for than you could ever ask for!

We're still having a bit of Halloween fun here in Longbox Junk by spotlighting  some of the spooky stuff lurking in the shadows of my (and my daughter's) comic collection.

This time out, join me in taking a look at a Halloween Special one shot featuring Red Sonja. . .a character I wouldn't normally associate with Halloween.  But then again, I just reviewed a Jonah Hex Halloween issue a few posts back, so I guess in the world of comics just about anything goes. 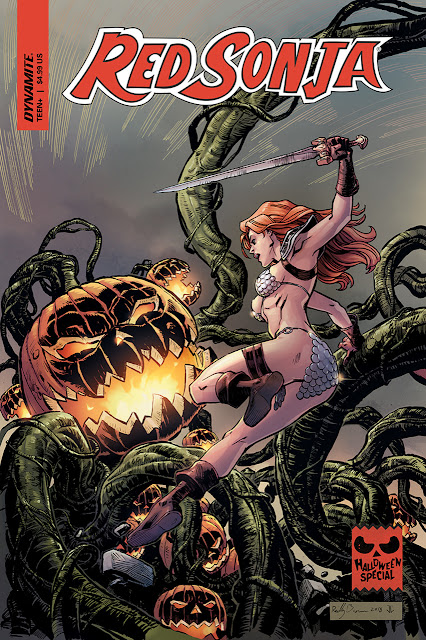 COVER: Reilly Brown
First, the cover.  Hmmmmm. . .not bad.  I like it.  I tend not to hang Red Sonja covers on my office wall's rotating comic collection because I don't want to get red-flagged for an awkward HR meeting, and this one definitely fits into that danger zone. . .that said, it's really well done.  It has a great feeling of motion, the pumpkin creature is amazing, and the colors are perfect.  I may not be able to hang this one up. . .even though the ladies at work don't seem to mind some Thor covers inviting them to the gun show. . .but it's a great Halloween cover.
Two stories in this issue. . .let's take a look.
CURSE OF THE WOLF
SCRIPT: Erik Burnham
PENCILS: Tom Garcia
Red Sonja rides into a village preparing to celebrate The Festival of Valahiei. . .which falls on the last day of Valahiei, when the veil between the worlds is at its thinnest and when spirits are most easily able to visit the world of the living.  Halloween, in other words. 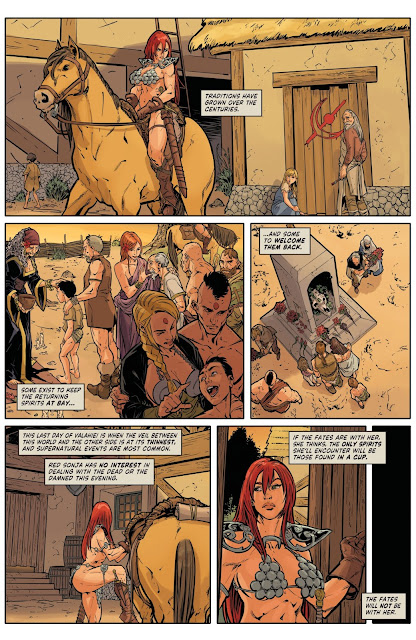 Later, while drinking and carousing in the local tavern, Sonja is approached by an old woman who claims to be in need of a warrior.  Her son is being held prisoner by a beast in the woods outside of town. . .a dangerous forest that only the most foolish would venture into on this night, of all nights.  Sonja agrees to help the old woman. 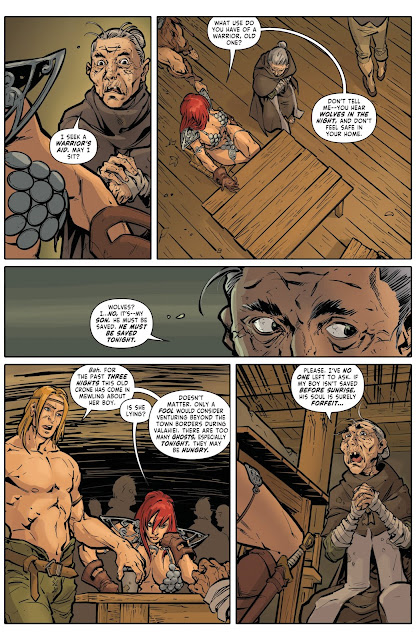 Red Sonja's new friend/drinking partner, Konnar, offers to guide her through the forest, and so the two of them set out on their adventure.  It isn't long before the pair discover why the villagers are so afraid of the woods as they are surrounded by spirits.  Sonja recognizes them as harmless shades, but then she hears a voice from her past. . . 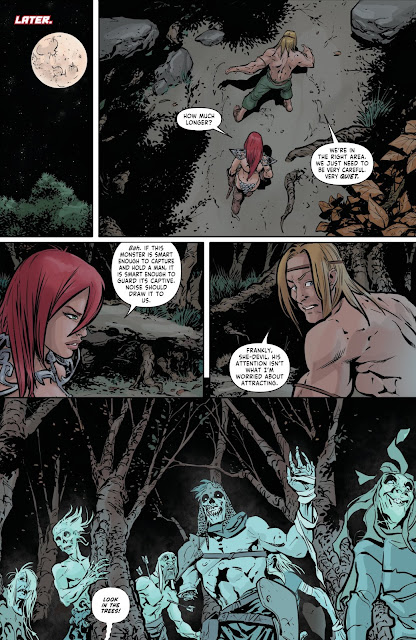 It is the mocking voice of Sonja's arch-enemy, the sorcerer Kulan Gath, who Sonja had slain years before!  Sonja goes on the attack as the figure of Gath rises before her, but her sword does no harm because he is also merely a ghost, but one that has come to taunt her.  As Kulan Gath tells her that he is there to watch her last battle and he waits to torture her in , she ignores him and continues deeper into the forest. 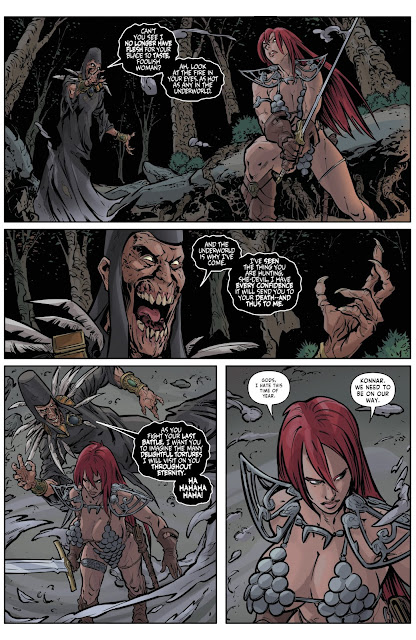 Suddenly, a vicious creature attacks from the darkness, taking Sonja and Konnar by surprise and beheading Konnar.  It's a werewolf! A brutal battle between Sonja and the creature ensues, but in the end Sonja kills the beast. 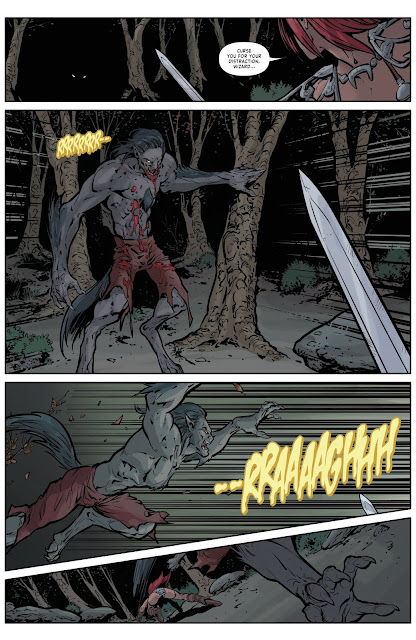 As Sonja recovers from the battle, the old woman from the tavern appears to thank her for killing the beast and freeing her son's soul. . .for they were one and the same.  Sonja is understandably upset by the old woman's deception.  The old woman turns into a spirit as the sun rises and thanks Sonja again, but the spirit's words ring hollow as Sonja considers the senseless death of her new friend, Konnar. 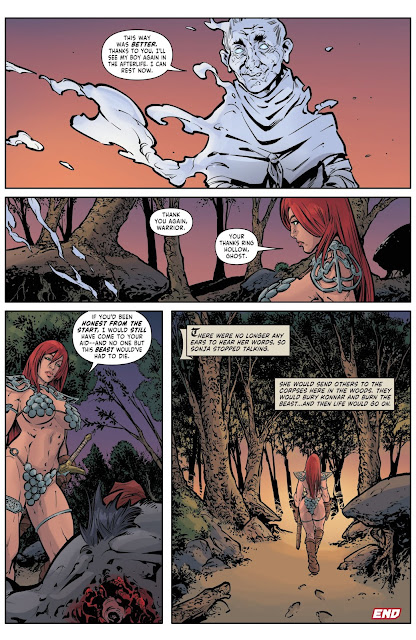 The End.
Spirits and Werewolves in a dark forest.  I guess that technically makes this a Halloween story.  It's not a bad little tale, even though I'm not entirely sure of the reason it even exists. . .beyond the obvious reason of Dynamite squeezing a few bucks out of Red Sonja fans for a "special" issue.  But like I said. . .it's not bad.  It's well-written and has a nice mix of action and slower moments in the short space it's given.
Probably the best part of this story for me was the art.  It's very nicely detailed and I really like that the artist portrays Sonja a bit differently than usual.  Where she is usually drawn as sort of a thin and very beautiful woman (see the cover for an example), this artist gives us a thicker, more muscular Sonja with a somewhat plain face. . .a more realistic look for a warrior, even if she IS still sporting a ridiculous barely-there chainmail bikini.  But it ain't Red Sonja without the trademark chainmail bikini, I guess.
So. . .a pretty good story with lots of spirits and a cool battle against a werewolf, backed up with some great art featuring an unusual look for Red Sonja.  This first story is a winner! Moving on. . .
HAIL HALCOOSE!
SCRIPT: Tom DeFalco, Anthony Marques & Liam Marques
PENCILS: Anthony Marques & Avery Marques
Red Sonja's meal at a tavern is interrupted when a young girl tries to warn her about something, but is quickly taken away as hooded men attack.  Sonja is so enraged by this turn of events that she decides to beat her attackers down with a leg of mutton and mug of ale instead of even bothering to draw her sword. 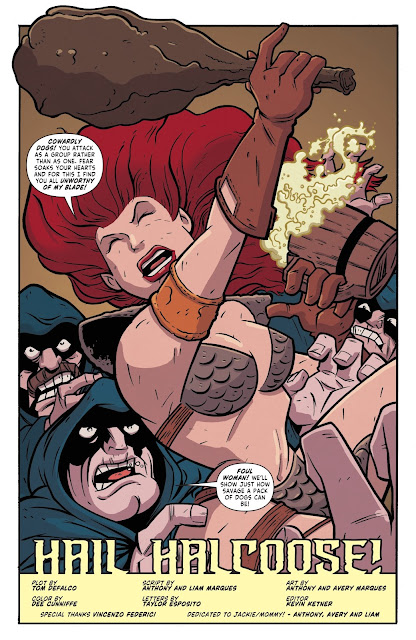 After Sonja easily defeats her attackers, she learns from one of them that they were trying to capture her for a sacrifice to "Lord Halcoose".  Worse, the little girl that tried to warn her is also supposed to be sacrificed.  This doesn't sit well with Sonja at all.  She vows to find and kill this Lord Halcoose. 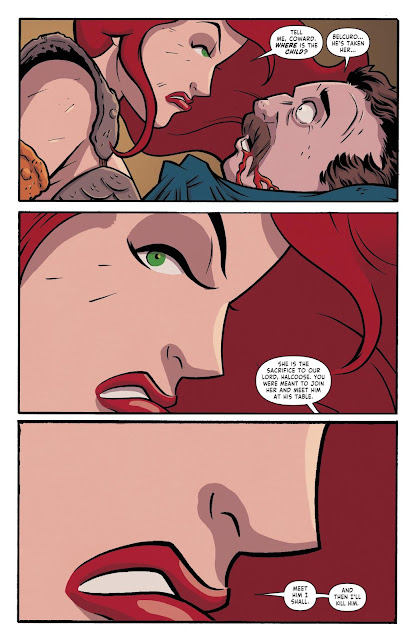 Elsewhere, a robed priest prays to a gigantic purple monstrosity. . .Halcoose.  The little girl who tried to warn Sonja is bound and prepared for sacrifice, but Sonja arrives just in time. . . 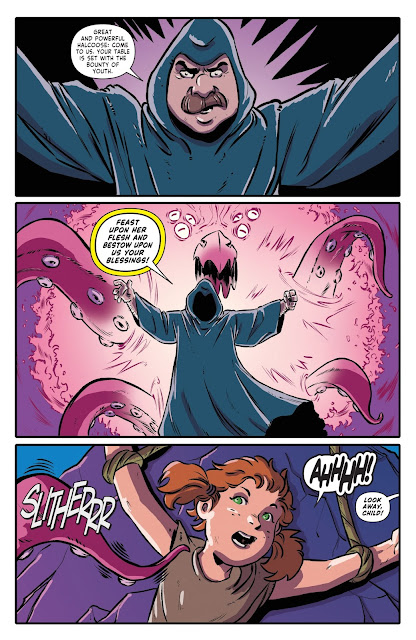 A short battle ensues and Sonja easily defeats both the priest and the creature. . . 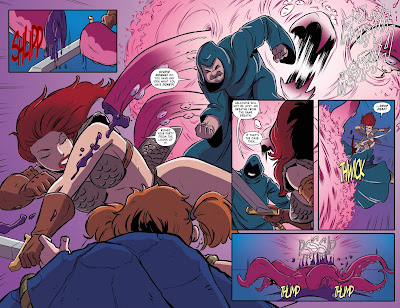 When the battle is over, Sonja warns any other followers of Halcoose to steer clear of her or meet the same fate.  She then frees the young girl and advises her to get a sword. 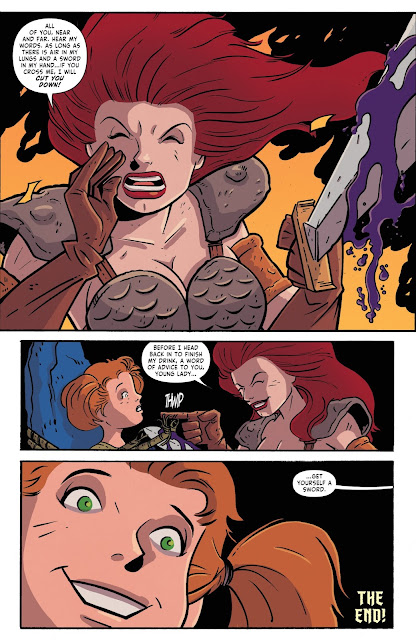 The End.
Okay then.   Hmmmm. . .
Quite a bit of difference between this story and the first one, both in tone and art style.  This story looks and reads more like one of the all-ages DC Super-Hero Girls comics than a Red Sonja comic.  It's much lighter in tone than the somewhat dour first story, and the ending has a happy "Girl Power!" feel to it, rather than the unhappy ending of the first story.
Likewise, where the art on the first story was finely-detailed and interesting, the art here is much more cartoony and exaggerated.
It may seem unfair to base my thoughts on this story by comparing them to another one, but the differences are jarring.  Taken on its own, this isn't a bad story at all.  It's extremely short and seems to have been written for a young female audience, but it's still pretty good.  The art is also quite different than what I would expect from a Red Sonja story, but for what it is, it's good and it fits the light tone of the story perfectly.
Still. . .it's a bit confusing to me exactly who this story was written for.

If I had to describe this comic in one word, that word would be: Confusing.
The two stories given in this issue aren't bad at all, but I fail to see anything but the thinnest connection to Halloween beyond the cover and a brief mention of a holiday of spirits in the first story, which could have been an adventure in ANY issue of Red Sonja without being in a special Halloween issue.
And then while the first story seems to have been written for existing fans of Red Sonja, the backup looks more like an all-ages "Girl Power!" offering aimed at young female readers. . .which I'm not sure is the average readership of Red Sonja's adventures.  The differences between the two stories are jarring.
You can't really give this comic to a young girl because the first story is for a mature audience. . .but then again, half of this comic is written for kids, so adult readers are really only getting half a comic for their money.
Overall, despite a bit of confusion on my part as to who this comic is for, I enjoyed it.  The first story was well written and the art style spotlights an unusual vision of Red Sonja I'd like to see more of.  The second story is quick, light, and features some nice cartoon-style art.
I'd say that if you're a fan of Red Sonja, then pick this one up if you spot it hiding in a bargain bin.  I'm not sure that anyone who isn't already a fan will get much mileage out of it.
Up Next. . .
There's still two weeks left before Halloween, so yep. . .MORE Longbox Junk Halloween fun!
Be there or be square.