It's October!  That means trick or treatin', candy eatin', and horror comics in Longbox Junk!

What we have here today is part of Marvel's short-lived effort at a bit of a monster comic revival a few years back.  This particular one shot is one of a set of three (the other two are Satana and Man-Thing) meant to re-introduce some Marvel Monster characters back into continuity in order to form a supernatural "Legion of Monsters" team.

Well. . .as you can probably guess by this comic landing here at Longbox Junk, it didn't really work out.  Legion of Monsters made just a few appearances as a team (most notably in the notorious Punisher "Franken-Castle" storyline and their own 4 issue mini) before they faded back into obscurity.

Just because something didn't take hold and ended up in the bargain bin, does that make it bad?  That's the sort of question I started Longbox Junk to answer!  Let's take a look a closer look at this little relic of a failed Marvel experiment. . . 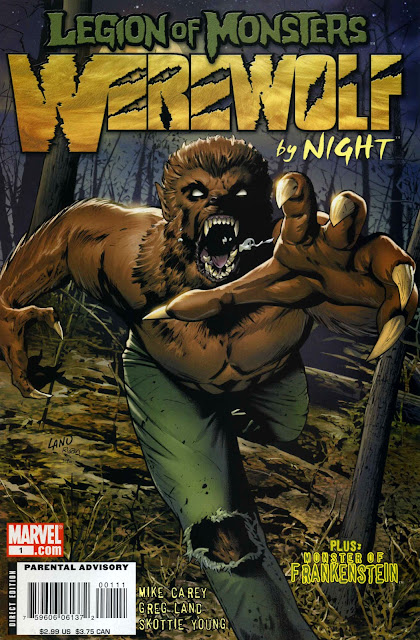 COVER: Greg Land
As usual, before we get into the comic, let's take a look at the cover.  And what a cover it is!
Greg Land is a sort of divisive figure among comic fans.  He's got a bit of a bad reputation that I'm not going to get into.  You either like Greg Land's art or you don't.  I happen to fall on the "Like" side of the controversy fence.
Controversial artist or not, I LOVE this cover!  It simply screams Halloween at me.  It's a pretty simple composition, but just look at the werewolf's feral face and reaching, clawed hand!  There's a feeling of depth and motion. . .a story moment captured in one image that is simply outstanding. In my extremely humble opinion, the cover alone is worth grabbing this comic from the bargain bin if you spot it.
Now let's check out the two stories inside. Fair warning. . .if you're a Greg Land hater, just skip to the backup because he's on art for the opener.  Everyone in that's staying in? Let's do it!
SMALLTOWN GIRL
SCRIPTS: Mike Carey
PENCILS: Greg Land
The story goes like this:
A young woman named Rhona was born a werewolf in a small Alabama town, but learned ways to control herself. Shortly after her mother and sister are killed by self-styled monster hunters, she goes to the local bar, knowing they will come for her too.  While there, she has a chance encounter with a handsome stranger. . .the only person besides her family who has ever treated her kindly. 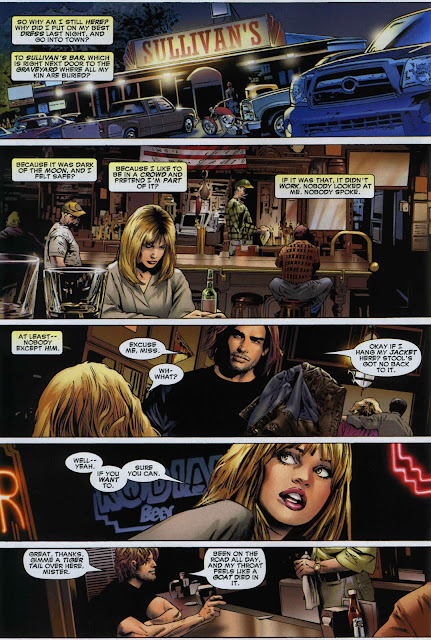 It isn't long before the group of "Monster Hunters" shows up.  One of them uses tarot cards to briefly reveal the monster inside Rhona.  She calmly accepts that it's her fate to die that night. . . 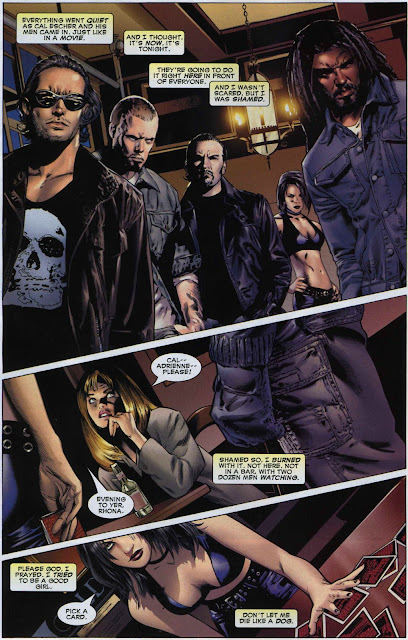 What Rhona doesn't know is that the handsome stranger is none other than Jack Russell. . .Werewolf by Night!  He's not going to just sit there and watch Rhona let herself be killed by amateur Monster Hunters.  He takes them by surprise as he transforms into a werewolf and goes on the attack! 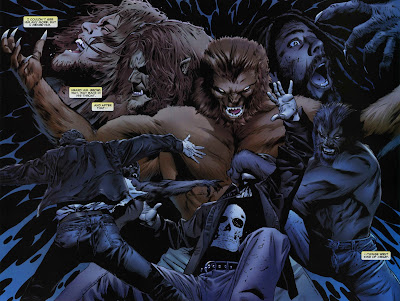 As Jack fights the rest of the Monster Hunters, Rhona is caught up in a deadly struggle with the woman who read her tarot cards and revealed proof she was a werewolf.  Rhona realizes the only way she can survive is to fully release the monster inside her for the first time. . . 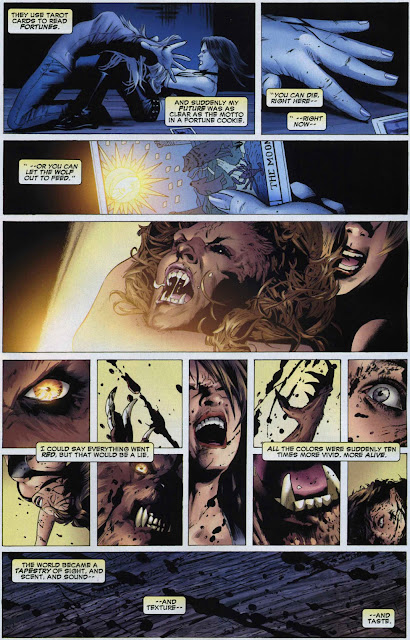 After the battle is won, Jack comforts a traumatized Rhona as she looks over the slaughter she was part of.  Jack tells her that suppressing the beast just made it worse, and he can help her.  They leave together. 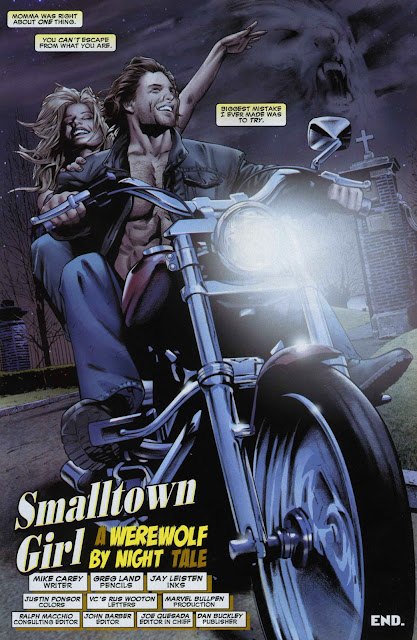 The End.
Not a bad little story.  Very short. . .really more of a vignette than anything.  But it was well-written and engaging.  That said. . .
For a re-introduction of Jack Russell to Marvel continuity supposedly aimed at new readers, there wasn't really much of an introduction here at all.  The story is told from Rhona's point of view and looking back over it again, I realize that Russell's name isn't even mentioned once!  This is much more an introduction to Rhona (who I'm not even sure even appeared anywhere else other than here) than it is to Werewolf by Night Jack Russell.
Does that make it a bad story? No.  I liked it quite a bit.  It just seems like a strange story choice for what's supposed to be an introduction.
As for the art.  It's Greg Land.  In the eyes of some comic fans, no matter WHAT he does it's not going to be good.  I'm not one of those fans.  I like his realistic style and I don't really care if he photo-references.  If you don't like Greg Land, you're going to hate this.  I didn't hate this.  Taking an honest look at just the art and leaving the artist's reputation out of it, I say it's pretty good.
NEXT!
TO BE A MONSTER
SCRIPTS: Skottie Young
PENCILS: Skottie Young
There's a backup story in all three of the Legion of Monsters one shots spotlighting one of the supporting characters of the team.  In Satana, it's The Living Mummy.  In Man-Thing, it's Simon Garth: Zombie.  In this one, it's Frankenstein's Monster. . .er. . .The Monster of Frankenstein.  Not sure if that's a copyright thing, but it doesn't sound right for some reason.  But I digress!
The story goes like this:
Our story begins long ago (it looks like maybe the story is set in the late 18th Century) as an escaped prisoner flees for his life from the men hunting him.  He stumbles upon a church in an abandoned town and seeks sanctuary, only to meet a fate. . . 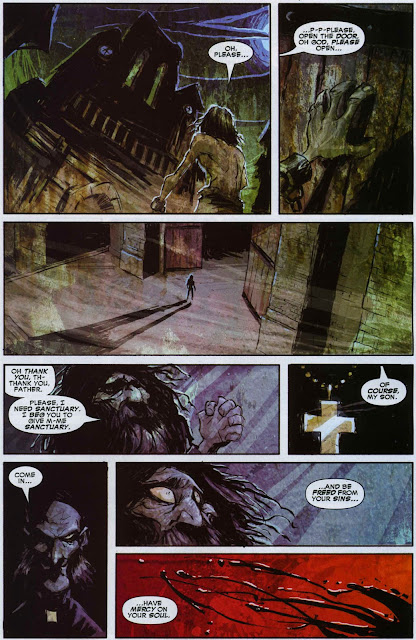 In a neighboring town, local clergy have gathered to decide what to do about the false priest luring and killing people using the mask of the church to carry out his nefarious deeds.  It is known among them that one of their number hides a powerful monster in his own church. . .a monster that could be used to destroy the false priest.
The priest who hides the monster protests, insisting that the creature has come to know peace through and has put aside his old violent ways.  He is commanded by his superior to set forth the monster upon the false priest. . . 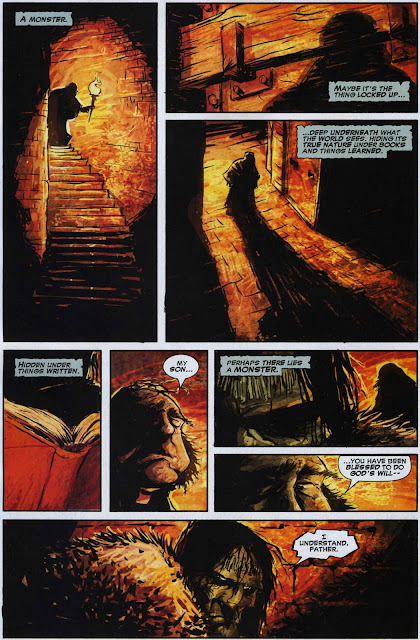 The Monster reluctantly agrees to take the task given to him and leaves for the church in the abandoned town.  Inside, he finds evidence of gruesome experiments.  He discovers a journal and begins to read. . . 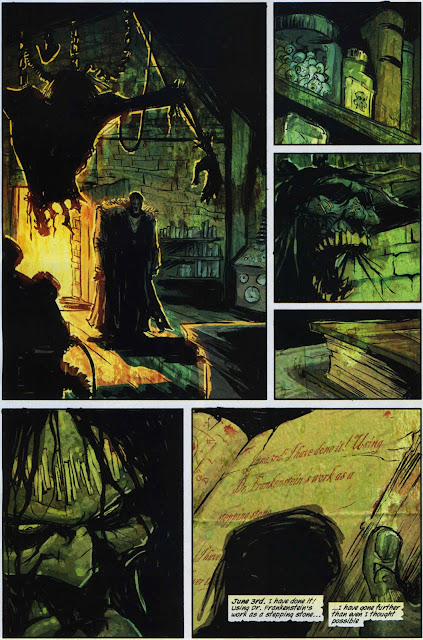 The Monster discovers the tale of a Doctor McCauley, who fell from good standing by using and furthering the research of the Monster's own creator, Doctor Frankenstein, to bring life to corpses.  Disgraced, McCauley left for the wilderness, where he poses as a priest in order to lure victims for his continued experiments. . . 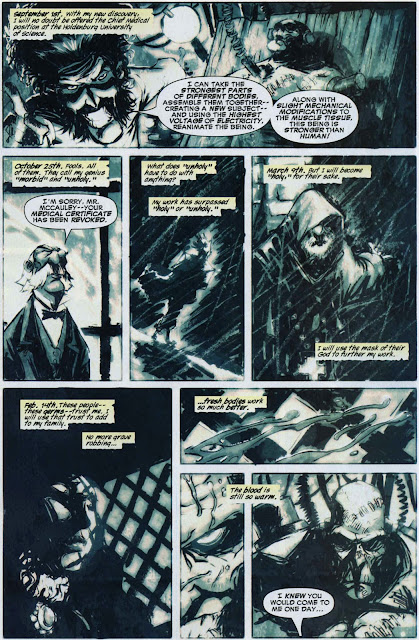 As the Monster reads McCauley's journal, the false priest confronts him. . .along with several of his creations, more powerful than the original Monster of Frankenstein by virtue of having been created with freshly-killed bodies.  The Monster informs the mad scientist that he has been sent to end him.  Upon hearing this, a brutal battle between the Monster and McCauley's creations begins. . . 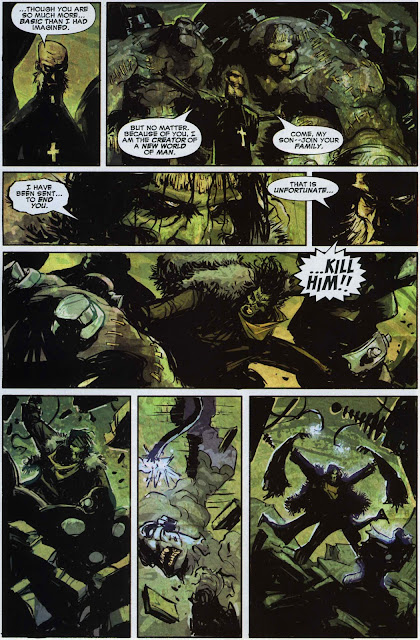 After defeating his creations, the Monster kills McCauley and sets fire to his laboratory before returning home.  The priest that had hidden him shows remorse for sending the Monster to kill again and begs for mercy, but the Monster kills the priest and leaves. . .knowing he will never have peace as long as the church knows where he is. 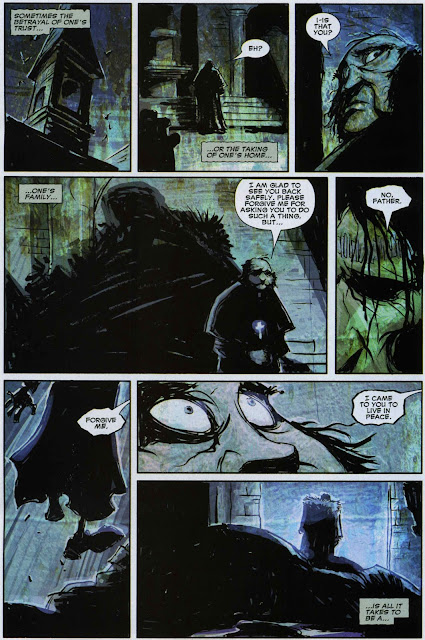 The End.
What a great little story!  As much as I enjoyed the opening Werewolf by Night story, I very much preferred this one.  Skottie Young does a great job writing (I know him more as an artist) a dreamlike, thoughtful tale of mankind as the monster.  Like the opening story, this one is very short, but seems longer because there's quite a bit more meat on the bone.
Like I said above, I know Skottie Young as more of an artist than a writer, but I'm used to a more cartoony, whimsical, humorous sort of art from him. . .so the art in this story took me by surprise as much as his writing did!  It's dark and twisted. . .adding to the heavy, dreamlike nature of the story and perfectly complimenting it.
The final full-pager of the Monster leaving yet another false sanctuary is a stunning portrait that I'd really like to have a poster of and is a fine piece of Longbox Junk Halloween fun! 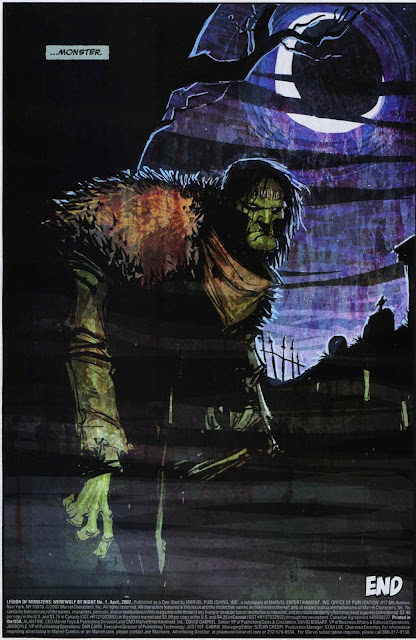 Overall, I liked both of the stories in this one shot, but found the backup to be superior in almost every way to the main feature.  If you are a horror comic fan (and aren't a Greg Land hater) then do yourself a favor and keep an eye out for this little Longbox Junk gem in the bargain bin.  You won't be disappointed.
Up Next. . .
MORE Longbox Junk Halloween fun.
Be there or be square!