It's October!  Leaves are on the ground and there's a chill in the air.  Halloween is just around the corner, so I like to have a little Longbox Junk Halloween fun this time of year by spotlighting some horror comics in my (and my daughter's) collection.

This time out, I'm stepping outside of the bargain bin just a bit and taking a look at the first issue of a Marvel book that sort of took the comic fandom by surprise.  I'm talking about Al Ewing and Joe Bennett' series,  "Immortal Hulk" (now on issue 24, as of this writing).

"Whoa now!" You say. "I thought this was supposed to be Halloween Horror up in the Longbox Junk." You say.  "Hulk is an AVENGER, son.  He's a superhero." You say. 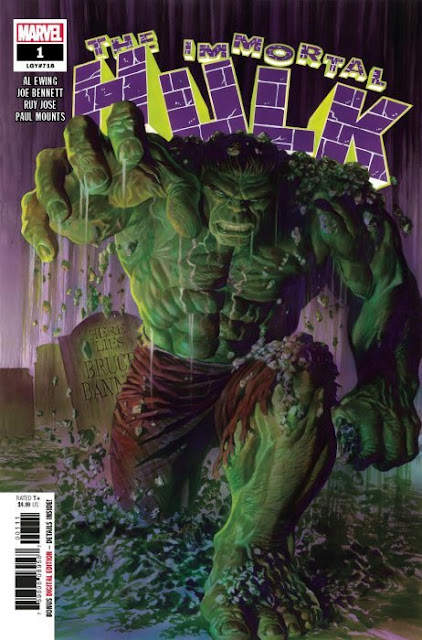 OR IS HE BOTH

I can't get into this comic without saying something about that utterly fantastic Alex Ross cover!  I mean, just LOOK at it!  Right off the bat without even opening the comic you can tell this might be a little different than usual.  That's a straight up Marvel-Tastic HORROR cover right there!  It's just wonderful in every way. . .the composition, the colors, the details.  Just look at Hulk's face! Alex Ross hits a home run with this one.

A robbery gone wrong at an Arizona gas station by a desperate young man leaves a 12 year old girl, the gas station clerk, and an unidentified man dead. . . 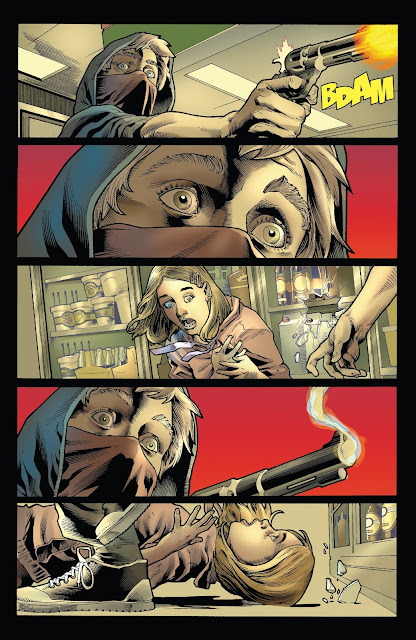 Hours later, after the sun sets, one of the corpses in the county morgue begins to transform. . . 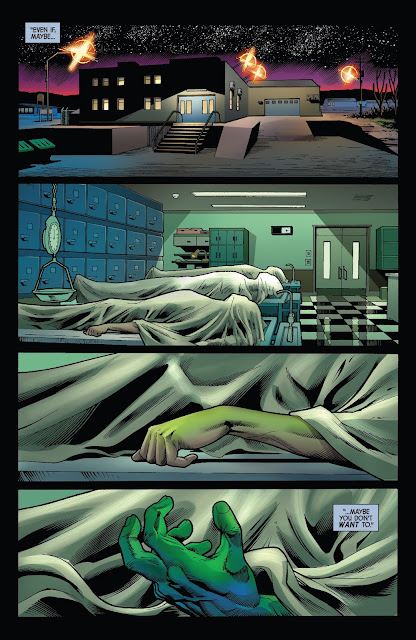 In the meantime, at the headquarters of the "Dogs of " biker gang, the robber tearfully recounts to the leader of the gang what happened earlier that day.  It's clear that he's out of his depth as the gang leader takes the little bit of money he stole and tells the terrified young man that he still owes more or the gang will take it out on his family. . . 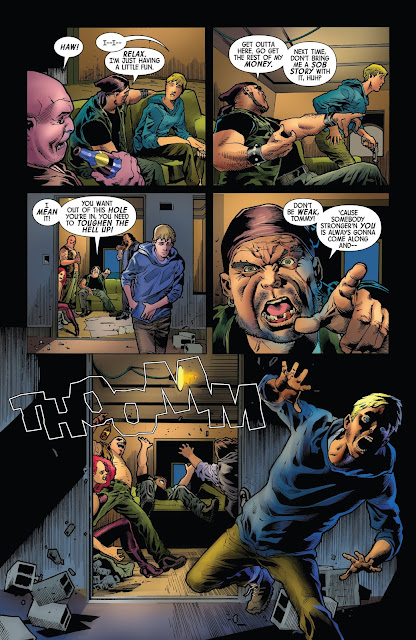 As the young man leaves, the house is shaken by what seems like a bomb, and then the biker gang comes under attack by an unseen, powerful force that quickly and easily takes down the entire gang in the darkness. . . 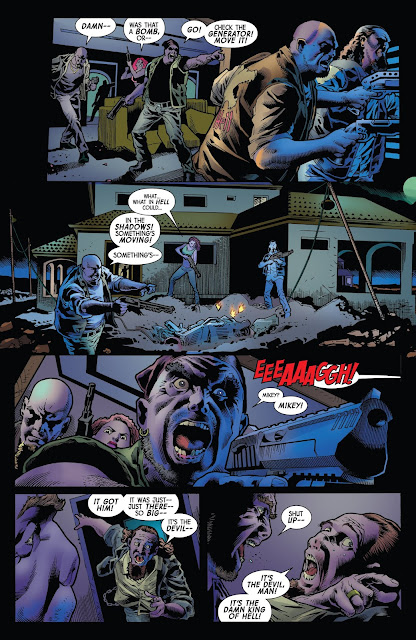 As the desperate young man tries to escape the carnage, he finally comes face to face with the attacking creature.  It was him that it was looking for.  As the terrified robber cowers, the creature speaks!  It tells the killer the name of the little girl he shot earlier.  The man begs for his life, telling the creature that he didn't mean to kill anyone and that he has a family. . . 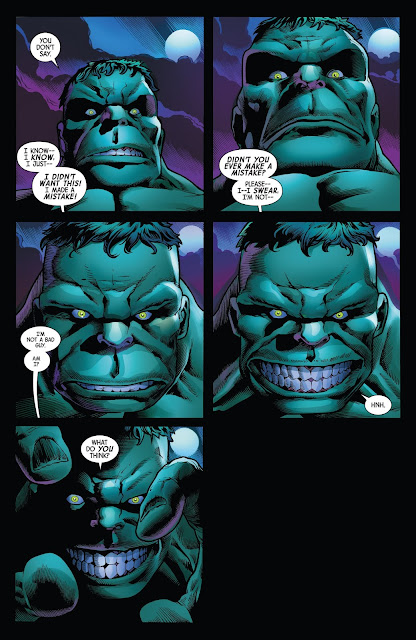 Later, the scene shifts to the local hospital, where the robber is in intensive care alive, but with almost every bone in his body broken and the doctors saying that IF he ever wakes up, he'll never walk again.  We also see the results of the creatures rampage through the small town with a hole in the wall of the morgue and the destroyed hideout of the biker gang. . . 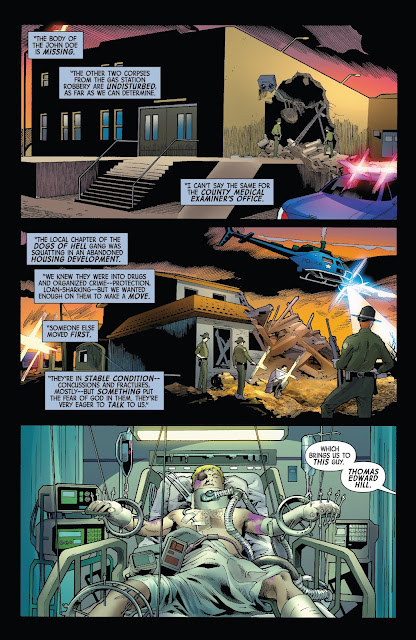 At the hospital, reporter Jackie McGee interviews Detective Gloria Mayes. . .who tells the reporter that the creature that caused the destruction is still unidentified, but from what the gang members saw, it was fast, huge, and green.    McGee quickly realizes that even though Bruce Banner is known to be dead, this absolutely sounds like the Hulk. . .even though that SHOULD be impossible. . . 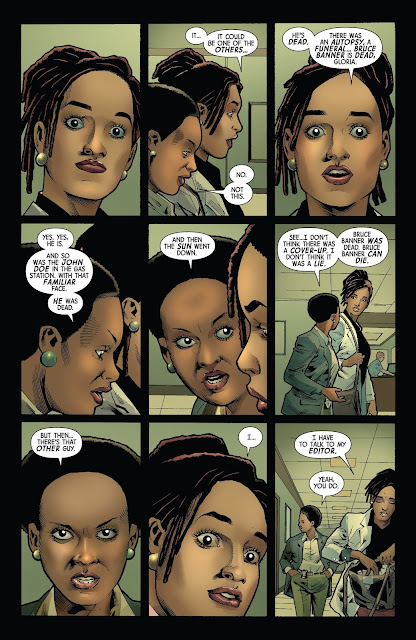 In a cheap hotel room as the sun rises, we see the man who the desperate robber shot in the head the day before now alive and well in the bathroom, talking to the mirror and asking himself if he's a good person. . . 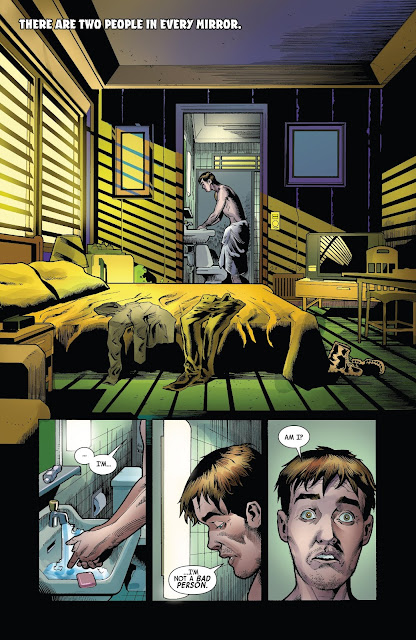 But then we see the "self" he's talking to is actually the Hulk, and we know that somehow Bruce Banner is alive, even though we saw him shot in the head earlier. . . 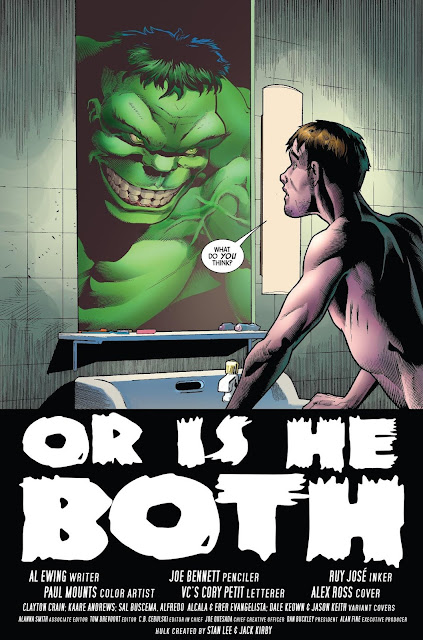 Nope.  No superhero stuff here.  Instead, we have a man that the world knows is dead walking around in Arizona.  We have a man who is shot in the head during a robbery coming alive when the sun goes down.  We have a man with a raging creature inside him that displays a wicked sense of intelligence even as it destroys lives and property.  In other words. . .we have the beginning of a horror story!

Al Ewing takes the Hulk back to the character's roots as an unkillable creature taking control at night while Bruce Banner keeps control during the day. . .a twisted modern day version of Jekyll & Hyde. A rage-filled monster created by science gone wrong sharing the body and mind of an unwilling normal human being.

It's a dark little tale of an accidental killer meeting a force of nature that keeps the Hulk itself as more of an unseen presence for most of the page count.  It stands alone, but leaves plenty of questions open for later issues.  In other words, it's a great introduction for readers (like myself) who might not really be Hulk fans to get into this new vision of the character.

Like I said above, I'm not really a Hulk fan, but this first issue immediately grabbed me as something different.   I really liked how there's not much Hulk in this Hulk comic!  The art also grabbed me.  Joe Bennett is great with facial expressions, which is perfect for this sort of story.  His vision of the wickedly-grinning Hulk is probably the most horrific part of this comic.  Later in the series, his scenes of Hulk transforming are simply amazing.

Overall, what we have here is a fantastic horror-based take on a character that wouldn't seem to have too many surprises left in him, backed up by some amazing art that perfectly compliments the dark story with a great focus on facial expressions.

If you are a fan of horror comics and haven't checked this series out yet because it's a Hulk comic, do yourself a favor and give it a try.