Welcome back to Longbox Junk, home of comic book reviews nobody ever asked me for. . .

That's right, folks.  Last month, my comic lovin' daughter challenged me to take on some reader requests.  I put the call out and gathered a decent list, then put them in a hat (A literal hat.  A pair of Disney World Micky Mouse ears to be exact) and drew one out at random.

I've said it before, and I'll say it again.  I'm not a big X-Men fan.  Never have been.  It's not that they're BAD, I just don't really like team books in general.  That said, if a story is good I don't care if it stars a thousand and one costumed characters.  The X-Men in particular have never appealed to me because of their extremely lengthy and convoluted continuity.  There just seems like too much dramatic backstory to keep track of, even if you buy in on a new #1.  On the other hand, my daughter likes the X-Men for just those reasons.  She loves the tangled superhero soap opera X-Men provides.

If I HAD to pick a favorite X-Men character, it would probably be Nightcrawler.  I don't know a lot about him, but what I do know I like.  I like the design of the character. . .the look of him is interesting.  I like his powers of teleportation.  I like his acrobatic combat style.  From what little I know, he's sort of like the X-Men's Spider-Man. . .a younger hero that loves his abilities and has fun fighting evil.

So even though I'm not a big fan of the X-Men in general, reading this solo Nightcrawler mini for the first time (it's from my daughter's collection) has me interested in learning more about the character.

Enough intro. Let's do it! 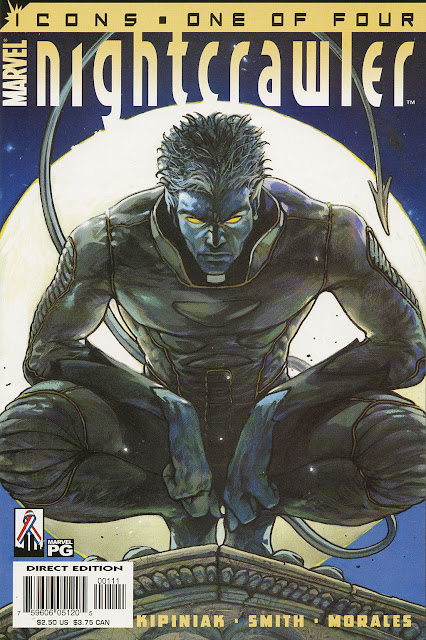 First off. . .she doesn't know it yet (until she reads this), but my daughter isn't getting this issue back for a while.  This fantastic cover deserves a turn on my office wall as part of my rotating comic cover art display.  All of the covers are nicely painted, but this one in particular is a real eye catcher!

Priest in training Kurt Wagner (AKA Nightcrawler) finds himself on the trail of a human trafficking ring after rescuing a runaway Thai woman.  As he follows the trail of clues, Kurt is forced to choose between the pacifist teachings of the church and his desire to use his mutant powers to help others.

This first issue really surprised me.  When I wrote the intro above and touched on the things I like about Nightcrawler, I had completely forgotten that being a devout Christian was part of the character.  This story leans HEAVILY into that aspect of Nightcrawler and provides a thoughtful story highlighting the conflict between Kurt's faith and being a hero.

The human trafficking plot is also quite a bit darker than I thought coming into this (remembering Nightcrawler as sort of a happy swashbuckling type of adventurer/hero), but is a perfect example of a problem that a superhero can't punch their way through to a solution.

The art is a style that is one of those "love it or hate it" sort of situations.  It's pretty heavily stylized and darkly inked, with sparse backgrounds.  Kind of a Mike Mignola-Lite to my eyes.  I like this sort of style quite a bit, and think it fits the story nicely. 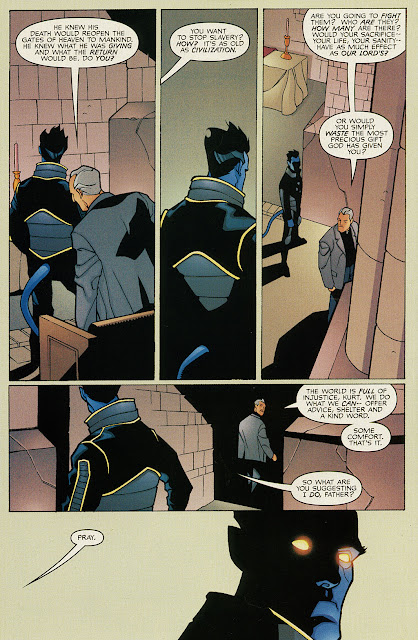 Overall, this story is quite a bit darker and more thoughtful than I thought it would be.   I was expecting acrobatic fights against villains punctuated by quips and jibes and got thought-provoking questions about responsibility, faith, and heroism in the face of a problem that basically can't be solved instead.  It was definitely unexpected, but I'm liking it a lot so far. 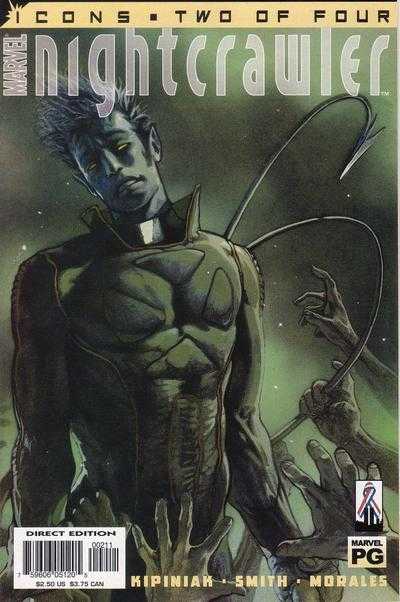 Still following the trail of clues up the chain of command of the human trafficking ring, Nightcrawler loses control of his violent tendencies during a fight to free a house full of illegal Mexican immigrants being sold as slaves.  As Kurt questions his actions in conflict with his faith, the head of the trafficking ring takes notice of the new threat to his operation.

While this issue was good, it didn't really pack the same punch as the first. The story seems to sort of cover a lot of the same ground as before, so there's the feeling of it not really moving the story forward.  Nightcrawler is still trying to reconcile using the usual X-Men "Punch the problem away" superhero tactics against what amount to poorly armed thugs, and questioning the more pacifistic solutions that his teacher offers. . .which basically amount to "We need to pray and hope helps these people."

The art remains strong, with more action scenes in this issue.  The standout being Kurt losing control and almost beating a random thug to death as he realizes that by saving a few people, he's not anywhere close to solving the problem. 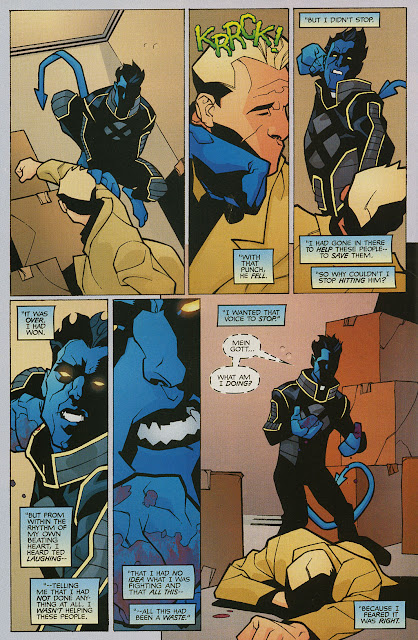 Overall, this issue is still good, but by covering almost exactly the same themes and questions of the first issue, it loses some forward momentum and almost feels like filler. 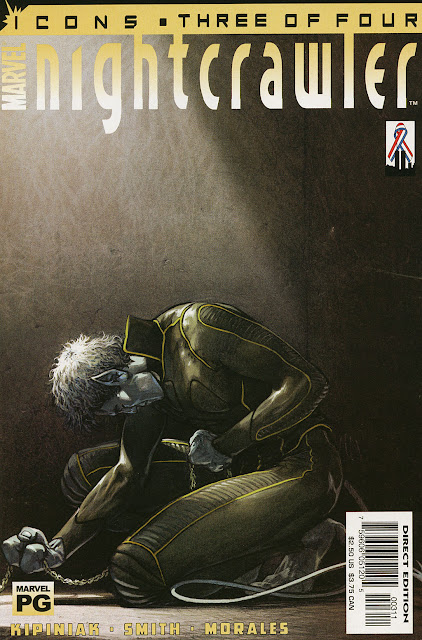 Oleg (the Russian head of the human trafficking ring) lays a trap for Nightcrawler using a prostitute that the hero is friends with as bait. When his friend betrays him and the trap is sprung, Nightcrawler is captured and heavily wounded as he makes his escape after learning that Oleg is moving his operation to another city and plans on tying up loose ends before leaving. . .including killing Kurt's teacher.

This issue continues to cover a lot of the same ground as the previous two regarding the question of faith in vs. Nightcrawler's belief in himself as a hero during a lengthy debate between himself and his teacher that's actually a pretty thoughtful conversation. . .is Nightcrawler doing the Lord's work or is he punching his way to the top of the organization because that's what HE wants to do?  This is the third issue that discusses this conflict, but it's probably best framed in this one.

Unlike the second issue, this one has more forward momentum moving into the final issue.  Outside of the moral conflict at the heart of the story, Nightcrawler being set up and betrayed by someone that he considers a friend has a dark emotional punch to it, especially when Nightcrawler realizes that his life is at stake because of his misplaced trust, as well as that of his most trusted friend and mentor. 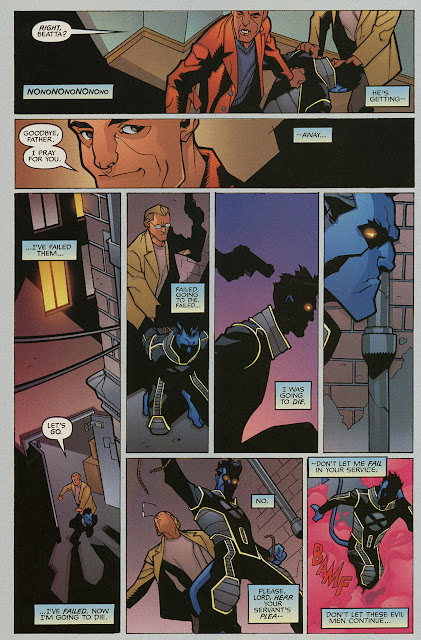 Despite continuing to cover the same questions of faith vs. heroism as the previous two issues, a dark betrayal by a friend and the threat of death for Nightcrawler's mentor because of his actions bring back the forward momentum of the story and set things up nicely for a big finish. 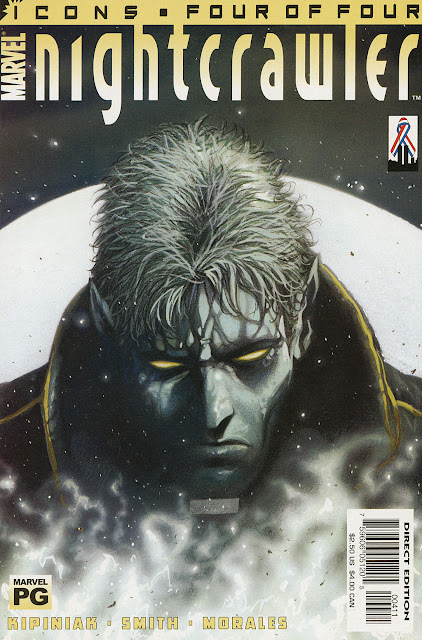 A badly-wounded Nightcrawler catches up to Oleg and easily defeats him in a final battle, only for the criminal to mock the hero's efforts. . .telling Kurt that there are more traffickers above and around him that will take his place, that putting Oleg in prison solves nothing.  In the end, Kurt decides that if only 1 out of 100 things he tries to do right ends up turning out for the best, then he's still doing the right thing and if that's 's will then so be it.

The final issue is a bit anti-climactic, since Nightcrawler is a mutant superhero punching a normal guy.  But really (as in the whole series) the action doesn't matter as much as the conflict at the heart of the story between faith in and faith in Nightcrawler's own abilities.  In the end, Kurt decides that as long as he TRIES to do the right thing, will decide how it turns out. . .a decent compromise and a good ending for the story. 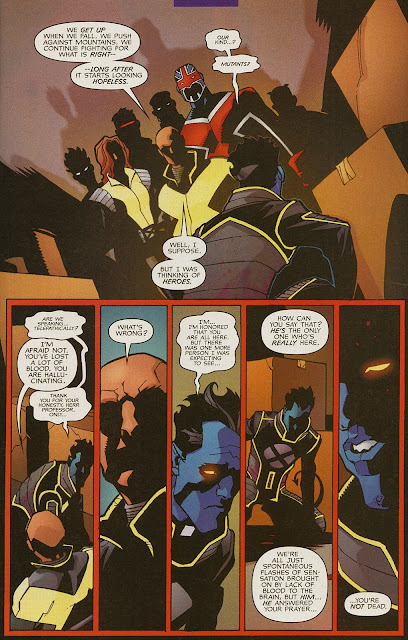 Overall, a satisfying end to the mini.  The compromise between faith and heroism that Nightcrawler settles on is a good one, even if it does seem a bit obvious.

I was pleasantly surprised by this mini.  I came into it expecting quippy acrobatic superhero battles and ended up with a thoughtful meditation on faith in vs. faith in yourself framed by a dark tale of human trafficking and backed up by some interesting art.  Completely unexpected, but I liked it a lot.  The second issue felt a bit like filler. . .like this could have probably been a 3 issue mini, but that's a pretty minor complaint.

It's not every day a major publisher leans so heavily into religious topics, especially within the world of mainstream superheroes, so for that alone this series is interesting.  If you have issues with religion (and especially Judeo-Christian religion) then you'll probably want to pass this one up.  If you can tolerate some religion mixed in with your super-heroics, then this dark and thoughtful tale is definitely worth a look.

Another random draw from the Reader Request hat!