Welcome to another Longbox Junk Retro Review!  Every now and then, I like to take a step back from my usual Bargain Bin fare and shine a spotlight on some of the older or more "valuable" single issues in my collection. . .this is one of those times.  Enjoy!

To many "serious" collectors, the comic at hand isn't that old.  Likewise it isn't really too "valuable", either (about $20 in perfect condition). What this comic DOES have going for it is that it was part of DC's celebration of America's Bicentennial in 1976, and I was wanting to do something related to Independence Day for this entry.

Oddly enough it seems to be the only comic I have from 1976 marked as being part of America's Bicentennial Celebration.  I have other comics from 1976 in my collection, but none of them seem to care about the Bicentennial. For that matter, it seems to be the only comic in my collection that has anything to do with Independence Day in general (my daughter is out of town, so I didn't have a chance to dig through her boxes). I find that a bit strange, but there it is.

What we have here is my lone Independence Day-themed comic book.

It's one of the last issues of Our Army At War (which changed title to "Sgt. Rock"  and went from being an anthology to a Sgt. Rock-only comic with issue #301).  In my humble opinion, DC has always had hands-down the BEST war comics, and Our Army At War was right up there at the top of the list with great recurring characters like Sgt. Rock & Easy Company and Enemy Ace as well as talent like Robert Kanigher, Sam Glanzman, and my personal favorite all-time artist, the legendary Joe Kubert.

I think what I like best about Our Army At War (and DC's war comics in general) is that they never really glorify war.  Most of DC's war stories are ACTUALLY Anti-War stories!  In my humble opinion, Sgt. Rock is one of the greatest Anti-War characters ever written.

But enough introduction.  Let's take a look at this comic.

Oh. . .and Happy Independence Day from me to you!

Enjoy yourself and drive safely. 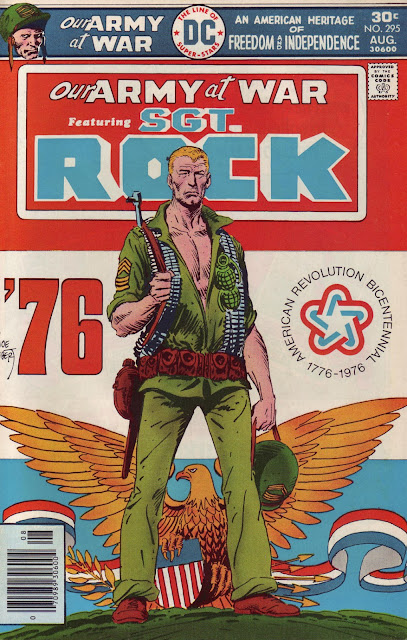 Before we get inside, let's take a moment and look at the cover.

And what a cover it is!

It's a simple character portrait of Sgt. Rock done by the great Joe Kubert, but in its simplicity there's a lot of power.  It's just Rock standing there, surrounded by the colors and symbols of the United States. Sgt. Rock is a grim and unheroic figure, weathered and weary of war. You can definitely see Kubert's intent to show the patriotism of America's Bicentennial contrasted with a representation of the tired soldiers that have fought for America through history.

This is a brilliant cover and definitely one of my all-time favorites.

Let's get into the comic!

THE DEVIL IN PARADISE

Sgt Rock and Easy Company are tasked with clearing a small town of any defenders so that an allied armor  unit can use it for a headquarters.  It's just another day in the war for Rock and the Easy veterans, but for a newly-arrived replacement, it's his baptism by fire when Easy Company loses several men to friendly mortar fire.

Rock is sickened by seeing yet another young man forced to witness the horror of war for the first time, and when the town is pacified after some brutal house to house fighting, he takes a walk to get some air and clear his head.

Outside of town, Rock is finally able to relax as he walks through a forest untouched by the war.  Unfortunately, on the shore of an idyllic pond, he is attacked by a German soldier.  A desperate hand to hand battle to the death ensues.  Rock finally wins, but as he looks around the forest. . .now disturbed by blood and battle. . .he realizes there's nowhere he can go to escape the war.

I have to say, this is a pretty powerful story.  It's well written by Robert Kanigher, and even though it's a bit heavy-handed, it packs a good emotional punch, especially in the beginning when Easy Company's new recruit gets his first taste of the horror of war and Sgt. Rock stoically tells him he's "joined the club". 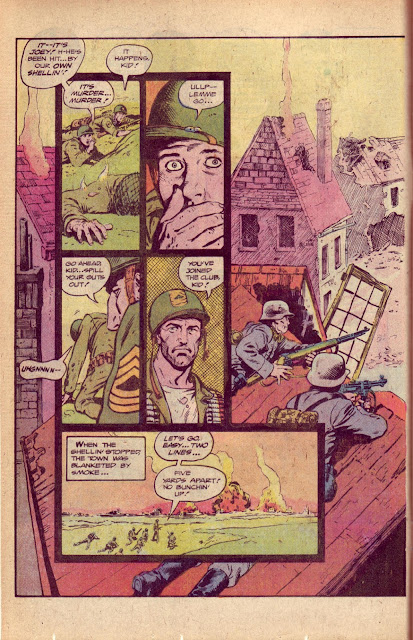 With that one single line, Kanigher tells us everything we need to know about Sgt. Rock.  He cares, but he's seen some stuff that can't be unseen.  He knows it's just the beginning for the new kid and there's nothing he can do about it except try to keep him alive. . .and there's no guarantees on that end.

Once again, I maintain that DC had some of the best Anti-War /War Comics ever put on the stands, and the writing of people like Robert Kanigher was one of the things that made that possible. . .this short, simple story is a fine example.

The art in this story is pretty workmanlike.  Generally-speaking, it's good but not great.  It tells the story but doesn't try to be special.  That said, there are surprising splashes of brilliance here and there. . .the stoic expression of Rock as he tells the kid he's "Joined the club" on the page above, and this panel of Rock walking through the forest after the fight through the town. . .

In my humble opinion, the panel above completely captures the essence of Sgt. Rock in an almost perfect way!  I just wish the art in the rest of the story could have matched it throughout instead of just giving us flashes of greatness. That said, overall the art is pretty good.

Here we have a one page comedy interlude between the two actual stories of the comic.  To tell the truth, after the emotional punch of the opening story, it feels really weak and somewhat out of place.  Don't get me wrong, Sergio Aragones is a legend and I'm generally a fan of his work, but this really isn't one of his better efforts, and it's made a bit worse by coming in after such a great opener. 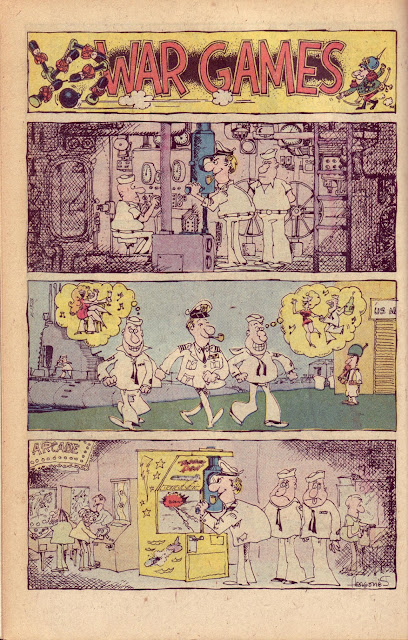 Here we have an illustrated re-telling of the true tale of legendary WWI American hero and Medal of Honor Recipient,  Alvin York.

York was a Tennessee farmer who, when drafted into the army during WWI, initially refused to engage in any kind of violence against his fellow humans because of his extremely strong religious beliefs.  He eventually came to believe that violence in the name of protecting others and the greater good was acceptable.

In France, at the battle of the Argonne Forest, German machine gun fire had killed all the officers and most of the men in York's unit, leaving Corporal York in charge of the remaining soldiers. . .all seven of them.

Faced with THIRTY-FIVE German machine gun nests, York used the marksmanship he'd learned hunting in Tennessee to single-handedly take down TWELVE of them.  He then had his remaining men provide cover fire as he snuck behind the Germans to continue his one-man assault. . .taking down SIX more before encountering a German Major who surrendered the rest of his forces to York.

ONE HUNDRED TWENTY-EIGHT German soldiers and 4 officers surrendered to York and his handful of men that day.  For this amazing feat, York was awarded the Croix de Guerre (France's highest military honor) and the Medal of Honor.

This short re-telling of Alvin York's story hits the high points, but still falls a bit short of the full story of probably the most humble Bad@$$ Uncle Sam has ever handed a rifle to and sent to a foreign land.  Seriously, this guy was the real deal.  Read up on him.

The story itself is written well enough, it's pretty much a "this happened and then this happened" no frills narrative that skims York's tale decently enough for those who might not know about him.

The art is likewise no frills. . .average bordering on poor in places.  It helps tell the story at hand, but that's about all it does.  There's absolutely no effort toward making the art anything other than than it needs to be. 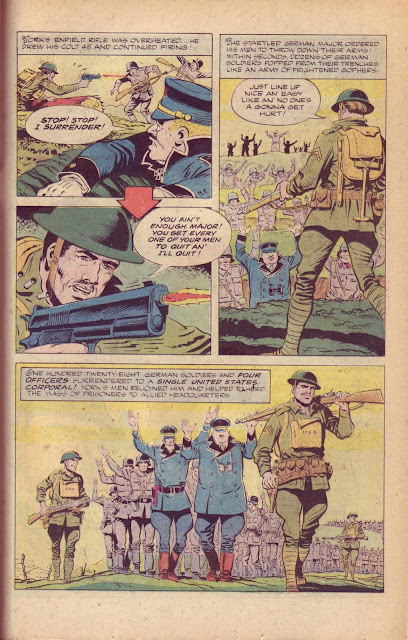 Overall, this is a pretty minimal effort, using material you could get out of an encyclopedia and backed up by artwork that barely manages to hurdle the low bar of average.  It's interesting because of the subject, but other than that. . .not much to it.

An almost perfect cover, a great opening story, a sorta "meh" one pager, and an average pre-Wikipedia true story info dump.  Overall, I give Our Army At War #295 a B- grade.  Where it's good, it's REALLY good.  The rest of it is just sort of. . .there.

The most disappointing thing about this comic for ME is that, despite that awesome cover, there's nothing in this comic about the Bicentennial or Independence Day in general, which really makes it a somewhat poor choice for an Independence Day Longbox Junk Special. . .but I've already written this much, so there it is.  I ain't a quitter, son!

All in all, I give this issue a recommendation for fans of war comics based on the main story alone.  It's a fine example of the War/Anti-War stories DC comics were so good at before the genre fizzled out.

Back to Longbox Junk business as usual. . .WITH advance apologies for inevitable summer delays.