Sorry about the Longbox Junk delays.  It's that time of year again.  School is out and the weather is great.  If you've ever worked in the hotel business, you know what THAT means.  If you don't, It means that even on the normally slow overnight shift I'm manager of, it's all hands on deck for 3 solid sold out months of every hotel's bread and butter. . .SUMMER TOURIST SEASON!

Welcome back to Longbox Junk, home of comic reviews that nobody asked for!

I've been celebrating my 175th Longbox Junk review with a completely unnecessary reboot and renumbering featuring "variants" of comics in my (and my daughter's) collection that are ALSO #175.  This being the 9th "variant" out of 10, I'm just about done with it.

What happens next, you ask?  Well, we move on to the fabulous issue #2, of course! Complete with TWENTY-FIVE super-collectible #185 variants! Awwww. . . .YEAH!

Just kidding.  I haven't quite decided yet, so you'll know when I do.

As always, be there or be square.

The "variant" at hand is part of the long-running (300 issues!) Hellblazer series put out by DC/Vertigo that ran from 1988  to 2013 (35 years!) and starring one of my favorite comic characters. . .the occult con man and occasional hero, John Constantine.

Constantine is one of those characters that I feel has to be in the right setting to work.  That setting is on the dark and dirty edges of the DC "universe", only rarely interacting with the regular characters.  This is a place I also feel best inhabited by The Punisher over in the Marvel Universe. Characters like Constantine and Punisher just work better in their own space.

Unfortunately, DC (and Marvel) just CANNOT bring themselves to keep Constantine (and Punisher) in a setting where his best stories can be told.  They just keep trying and trying to put him into a place where he's forced to interact with superheroes.  I find it odd that DC can't look at the 300(!!) issue run of Hellblazer and see what worked and go with that instead of the more recent reboots and cancellations resulting from watering the character down and forcing him to inhabit a space where he doesn't really fit well.

So if you're not familiar with the "Real" John Constantine, you have been warned.  These comics are NOT for kids.  That said, I'll keep this review on the "All Audiences" end of the dial. 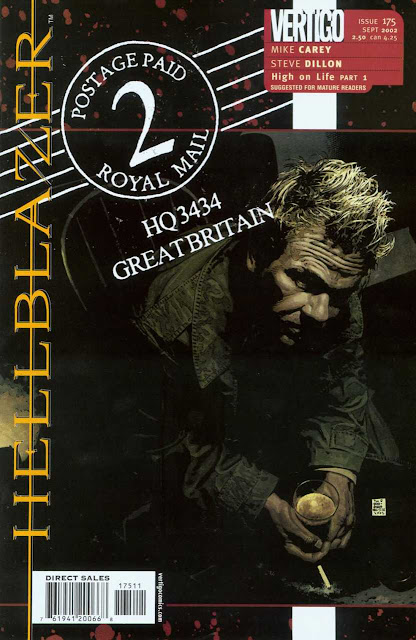 As usual, let's take a quick look at the cover before we get into the story, shall we? We shall!

I love Tim Bradstreet's almost photo-realistic work.  This cover is no exception.  It's not the BEST Bradsteet cover I've ever seen, but it boils down the essence of John Constantine in just a single image. . .a worn-down, aging but still sorta handsome guy who looks like he slept in his clothes on a couch (and he probably did).

You can tell from the darkness in his eyes that this guy has seen some stuff, and if you're coming up to talk to him, you'd better be about some serious business or he's just going to tell you to F off and go back to drinking his pint.

Let's get into the story.

Just a bit of background, because this story is fixed in a specific spot in the LONG continuity of Vertigo's Hellblazer.  At this point, Constantine had just spent about 2 years (and 28 issues) in the United States having various adventures.  Everyone thought that he had died in a prison riot about 18 months ago.  This issue deals with his initial return to England.   And that's enough background.

John Constantine quietly returns to London after a long, eventful sojourn in America and decides his first order of business should be to tell his sister and niece that he's still alive. . . 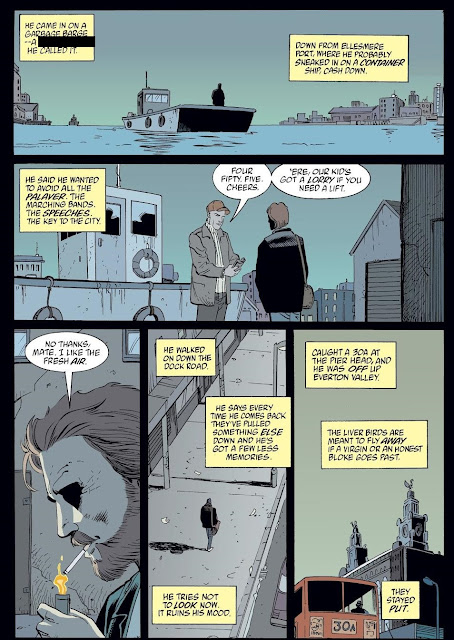 Naughty words blacked out through this review by yours truly.

Just prior to his arrival at his sister's new apartment a man hangs himself from the stairwell.  Constantine doesn't take much notice of it, and wants to avoid the attention of the police anyway.  John's reception upon just showing up at his sister's without any announcement and after her believing him dead for over a year is not pleasant. . . 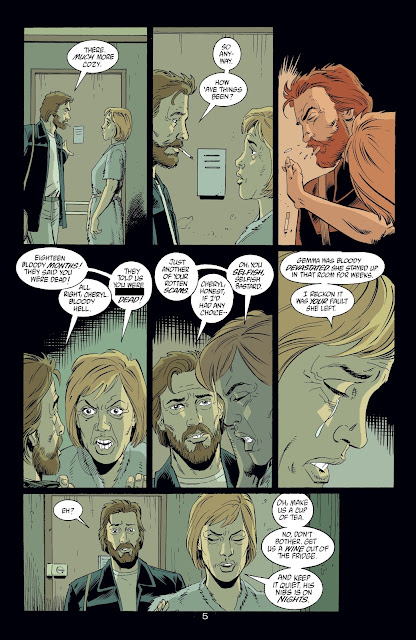 After calming his sister down and reconnecting a bit with her, Constantine decides to go and get a feel for the area because he senses something is wrong. . .he feels a sort of sickness in the air around the building his sister lives in.

He ends up at a cheap diner, where he learns that strange deaths and events have surrounded Elster Tower (the apartment building where his sister lives) for a while.  Shortly afterward, Constantine meets a mysterious woman named Angie Spatchcock working at the diner  who claims to know magic.  John is skeptical. 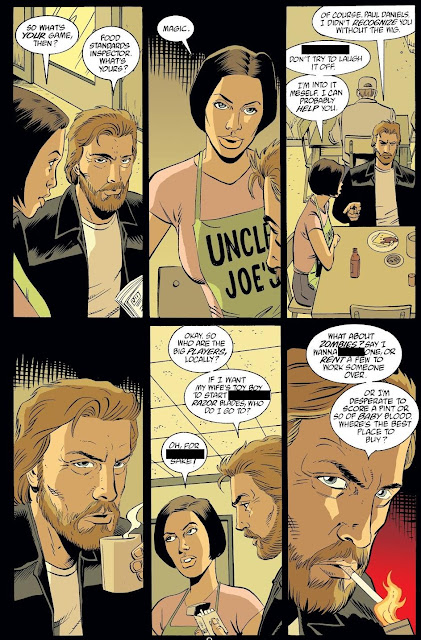 Angie  finally convinces John that she knows a little more than she should and he reluctantly enlists her into his investigation of the strange things going on at Elster Tower.  Following up on a suggestion from her, he makes his way to a government office and finds the names of the most recent tenants.  He heads back to the Elster to check out his leads.

Two of them are dead ends, but on the top floor of the building, John hits paydirt when he discovers an apartment with magic protection sigils around the door and a burly guard outside.  After a brief confrontation, he discovers the apartment is being rented by a seemingly harmless old lady. 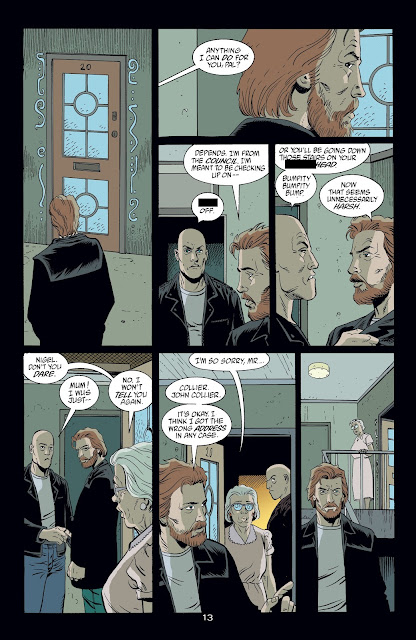 Later that night, John meets his sister and her husband at the pub for a bit of a celebration of his return.  Constantine's brother in law isn't a big fan of John and even less of a fan of his sudden resurrection from the dead and appearance at their doorstep, and he makes sure John knows it. 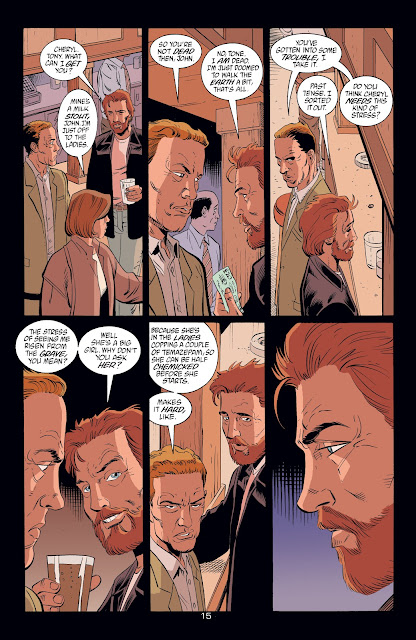 While John is enjoying a tense family reunion, Angie Spatchcock decides to help John with his investigation of the Elster without his knowledge or permission. . .without realizing that helping John Constantine do ANYTHING never really ends well. 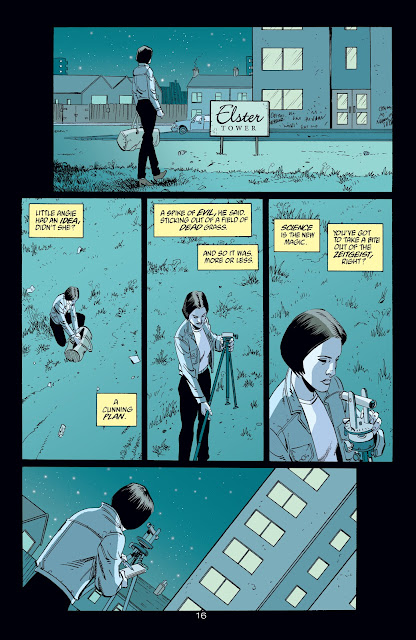 The family reunion gets even more tense as John confronts his sister about her new prescription pill habit he learned about from her husband.  She blames the pills on worry about John's niece, Gemma, who has left home and moved to France, only rarely sending postcards and never calling.  Her husband is convinced that John has just as much to do with it as anything else.

Things build up to an argument that leads to John's sister telling him to get out of their life and them all leaving the pub before it comes to blows and heading to the Elster in order to gather John's things.

While John is completely ruining any chance of a happy reunion with his sister, Angie's investigation takes a turn for the worse when she is discovered and attacked by two men.  One of them is the guard that John encountered earlier in the day. 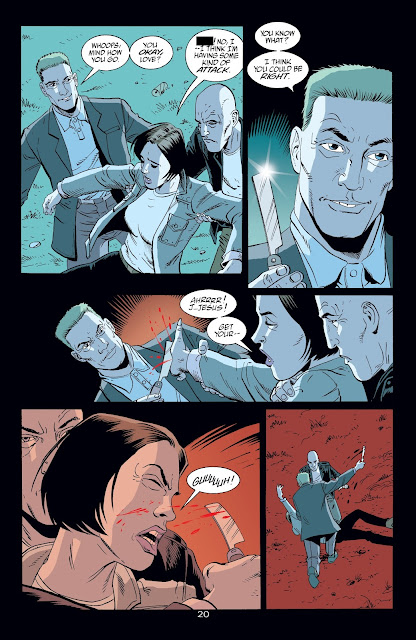 As John and his family walk back to the Elster and he tries to cool his sister down a bit, they encounter Angie being attacked outside the building.  John and his brother in law chase off her attackers and discover that Angie is alive, but just barely.  John knows that once again someone has been hurt because of him.  He decides that the time for staying quiet is over. 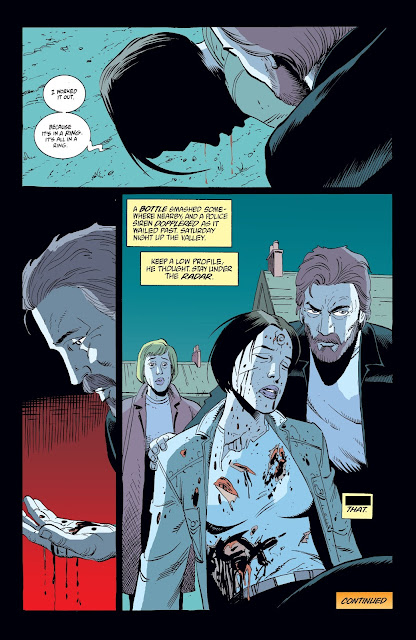 Let's break it on down!

Hellblazer is sort of a hard comic to review a single issue of.  The series has a long and sometimes complicated continuity that often prevents any one issue from standing alone.  This issue is no exception.  It begins a new story direction, but at the same time, it relies on past conflicts with Constantine's family and begins to build story elements that won't pay off for YEARS to come (Angie Spatchcock will be a recurring character off and on for the next 5 years of Hellblazer).

Honestly, even though it makes individual issues a bit hard to review, the slow-burn storytelling is one of the best things about Hellblazer and probably one of the main things that kept this series chugging along for 35 years.

Because this issue IS the beginning of a new story direction, it stands alone a bit better than most Hellblazer issues.  It basically tells the tale of John Constantine deciding to return to his homeland and re-connect with his family.  He isn't looking for trouble.  He just wants a little normal back in his life.  Unfortunately, trouble follows John Constantine like teenage girls follow boy bands.  Despite his best intentions, he finds himself hip-deep in occult shenanigans and family problems before he's off the boat for a single day.

I really liked this issue.  It sort of boils Constantine down to his essence. . .he's just the sort of guy that trouble follows.  There's no escaping it, and those who come into close contact with him usually end up paying the price.  It's not a complete story (it's the first issue of a 2 parter), but there's enough meat on the bone here for me to want to know what happens next.

If you're writing for a slow-burn, dialogue heavy comic like Hellblazer, where story elements might not pay off for a long time to come, then the writer better have something to hang their hat on other than action (there are LONG stretches of Hellblazer without any action at all to speak of).  This is one of the reasons why Constantine doesn't really fit well in the world of Superheroes.  There's a LOT of dialogue in a Hellblazer comic.  Some issues are nothing BUT dialogue!

Fortunately, the writer here has a great handle on dialogue, giving the characters in the story their own unique voices, from John Constantine himself all the way down to a ship captain that gets one single panel of attention.  The conversations flow naturally, and you can almost hear the characters speaking in  your head.  THIS is the kind of writing that supports a character that can go long stretches without any action scenes.

What can be said that hasn't already been said about the late, great Steve Dillon?  He was one of the modern masters of facial expression whose art perfectly compliments characters like John Constantine and Preacher by providing an essential level of visual storytelling in comics that are often dialogue-heavy and don't have an action crutch to lean on.

Dillon was one of those unique "love it or hate it" artists with an immediately recognizable style that there isn't really much middle ground on. . .but when it comes to comics like Hellblazer, I'm definitely on the "Love it" side of things.  I especially liked his depiction of bearded John Constantine in this issue (normally, he's clean-shaven).

Unfortunately, there are some coloring issues that somewhat bring down the visuals here a bit, but that isn't Dillon's fault. Overall, the art in this issue is very well done.

Overall, I found Hellblazer #175 to be a very enjoyable comic.  It's well-written, with  some nicely expressive art, and it makes me want to know what happens next.  What it does most is REALLY make me miss the Vertigo version of John Constantine.

It's not going to be for everyone. Hellblazer is a "Mature Audiences Only" comic and this issue is no exception (mostly language), it's connected to past AND future continuity, and Steve Dillon is one of those "Love it or Hate it" kind of artists.

Those things aside and generally-speaking, I can recommend this issue as a pretty good jumping on point for those interested in learning more about the "Real" John Constantine beyond the watered-down T.V. and mainstream DC versions.