Welcome back to Longbox Junk, the home of comic reviews that nobody ever asked for!

I'm celebrating my 175th review by following the lead of major comic publishers and giving you a completely unnecessary reboot and renumbering. . .including a fabulous first issue Special Collector Edition with 10. . .count 'em! TEN VARIANTS of comics in my (and my daughter's) collection that are also #175!

What's that?  You say I promised only NINE variants?  Well, I've added a premium collectible SIGNED super-secret variant!  Get your pre-paid pre-orders in to gain this valuable once in a lifetime piece of comic review history!

The variant at hand is a mighty fine collectible itself.  A "retro-review" western variant of the Longbox Junk #1 Special Collector Edition, stepping back to 1973. . .er. . .I mean 1963 and 1950 (the two stories in this issue are both reprints) for some rootin' tootin' western shootin' AND a tiny bit of casual racism from the record-holding longest-running (31 years) western title in comics history. . .Kid Colt Outlaw!

I've been recently told that my intros are getting a BIT long, so let's just leave it at that and get into it! 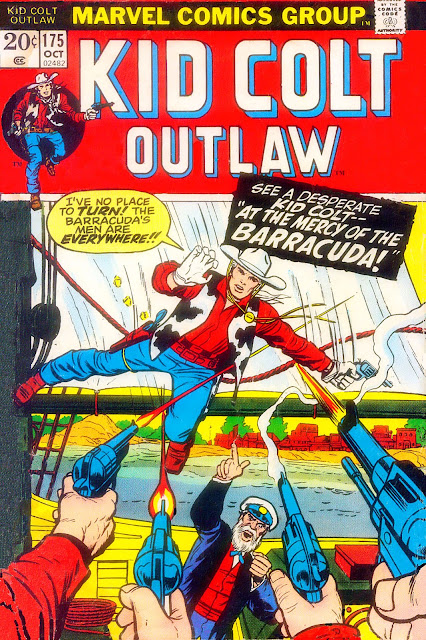 As usual, let's take a look at the cover of the comic at hand for a moment before diving inside.

Hmmmmm. . .okay.  It's basically a slightly re-worked and re-colored version of the original Jack Kirby cover on Kid Colt Outlaw #109 from 1963.  I don't have that issue, but from looking at images of the original on the internet, I have to say that I prefer the earlier version.  Decide for yourself: 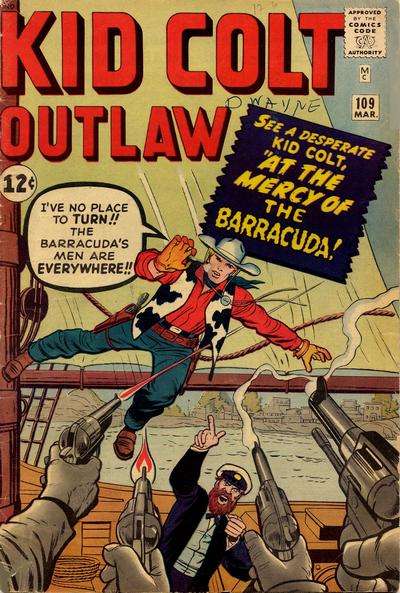 The line art is the same, but the later version's colors are garish enough to make what was ALREADY a sort of ho-hum cover worse.  I buy a lot of these older comics for the covers.  Not this one (I got it as a random part of an auction lot about 5 years ago).

It's not a TERRIBLE cover, and I'm not going to try and knock a legend like Jack Kirby off his pedestal, but this isn't even CLOSE to his best work.  That and the garish colors on the 1973 version make this a cover that is unlikely to ever end up on my office wall as part of my rotating comic cover art display.  MAYBE if I had the original.

AT THE MERCY OF THE BARRACUDA!

As you can see, not only did they recycle the cover from Kid Colt Outlaw #109, but the main story is also a reprint from that same issue.  In other words, I'm a bit disappointed in not getting some Western action from the Bronze Age (my favorite age of comics), but getting a Silver Age reprint instead.

That said, I'll give it a fair chance, so here we go!

We jump right into the action with Kid Colt making a daring escape from jail with the assistance of his trusty steed, Steel, and with the local Sheriff hastily forming a posse to pursue the fleeing outlaw. 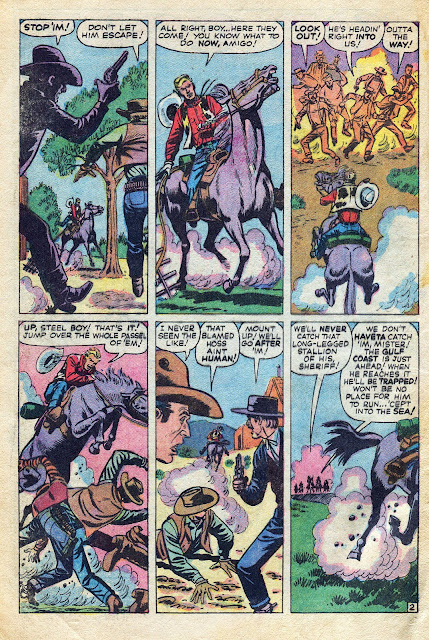 Trapped between the Gulf of Mexico and the posse hot on his trail, Kid Colt decides to make a last stand in the small town of Pecos Hill.  But fate intervenes as a ship captained by an infamous pirate called The Barracuda sails into view and begins shelling Pecos Hill with cannon fire!

The Sheriff's posse flees, not wanting to deal with The Barracuda.  The Sheriff himself is knocked unconscious by flying debris.  As the pirates come ashore with the intention of kidnapping some men for their crew, Kid Colt decides that his best chance of escape will be to stow away on the ship. 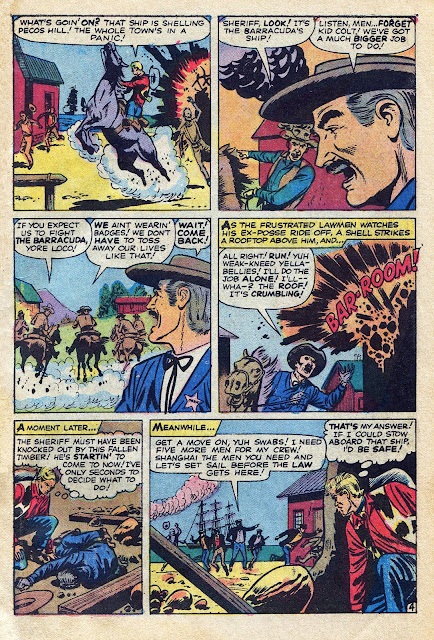 After the pirates complete their business in Pecos Hill and set sail, Kid Colt is quickly discovered, and The Barracuda orders his men to force him to walk the plank! 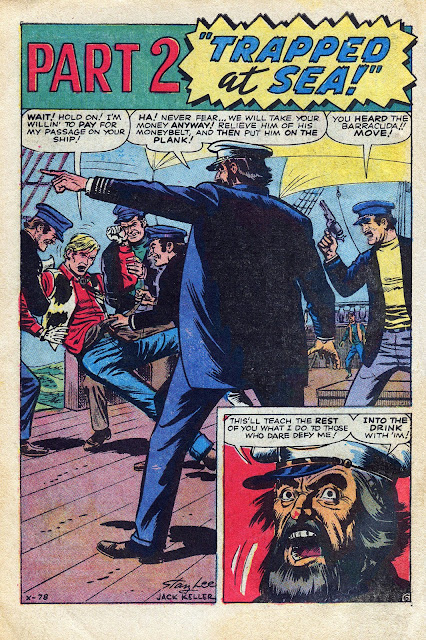 Kid Colt manages to outwit the pirates and escape being forced to walk the plank, but he quickly finds out that there's not too many places to run when you're aboard a ship. . . 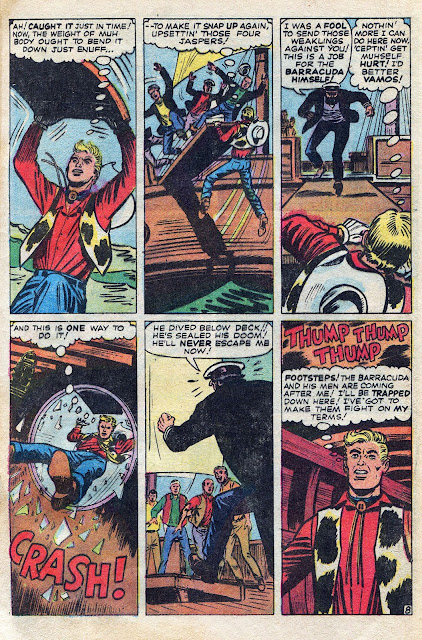 The pursuing pirates force Kid Colt up into the rigging of the ship, where he makes a desperate appeal to the kidnapped men to help him out.  The men refuse to help and Kid Colt decides he's going to go down fighting.

He swings down to the deck to confront The Barracuda, and during the fistfight that follows, the crew learns that their stowaway is none other than the infamous outlaw, Kid Colt!  Knowing his reputation, the crew decide to throw in with Kid Colt against The Barracuda and his officers. 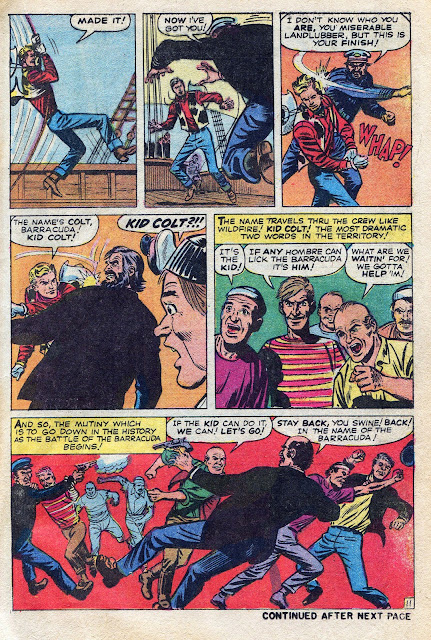 The Pirate ship is sailed back to Pecos Hill, where the Sheriff is astonished to see Barracuda's men being marched down the dock as prisoners.  He promises a medal to the man responsible, but when he sees Kid Colt, he shouts for another posse to form up as the outlaw flees town.  Kid Colt decides he didn't really want a medal anyway. 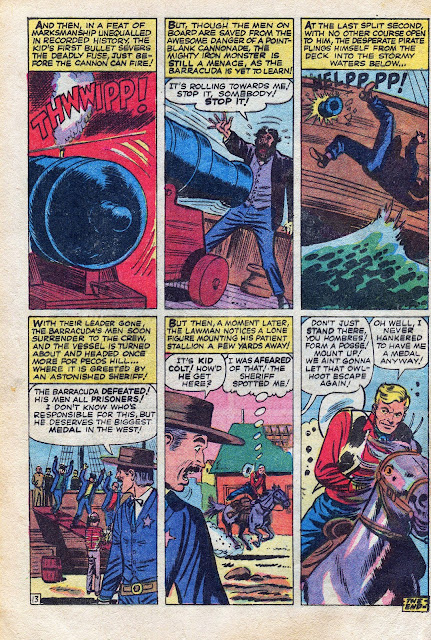 I'm not familiar with Kid Colt (this is the only Kid Colt comic I own), but this story makes it pretty clear that he's from the good guy outlaw "Robin Hood" family of adventurers that's been written about for hundreds of years.  I'm not sure a sea-faring story is the best introduction to a western outlaw/hero character for a new reader like me,  but for those who regularly followed the exploits of Kid Colt it was probably an interesting change of pace.

It's a pretty short and to the point story.  It doesn't try to be anything great.  At the beginning, Kid Colt is on the run. . .then he has a little adventure. . .and at the end Kid Colt is on the run again.  Unfortunately, I don't have any other Kid Colt comics to compare this to, but I'm willing to bet that's how most of his stories are set up.

The art is actually pretty good for a Silver Age comic.  It's solid and (like the story itself) it doesn't try to do anything great.  I'm not sure if it has the original coloring, or if like the cover it's been re-colored, but the colors are a little garish and sloppy in places. . .but not too bad, compared to other comics of the era.

Overall, this was a fast-paced, somewhat enjoyable story.  Ultimately it's pretty forgettable, but I can't find anything terribly wrong with it except that it doesn't really make me excited to learn more about Kid Colt. Other than that, it's a decent little story.

We step back in time even more for the second story. . .right to the Golden Age of comics in 1950 with another reprint story.

It's set up as a non-fiction illustrated look at the exploits of an actual Western Outlaw, but I was disappointed to learn with a bit of internet searching (after reading the story and getting interested) that the Outlaw in question isn't real at all. . .

Let's get into the story!

Rafe Hammer is a former member of Quantrell's Raiders who uses his knowledge of Civil War Geurrilla tactics to great effect as an outlaw who avoids capture by never using the same method twice while robbing stagecoaches in the Dakotas. . . 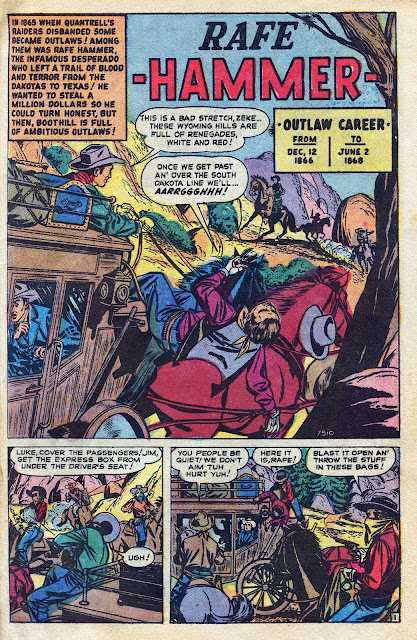 When a robbery goes bad and one of his gang is killed, Hammer realizes that things are too hot in the Dakotas, and he decides to head south to Texas. . .intent on stealing a million dollars so that he can retire in style. 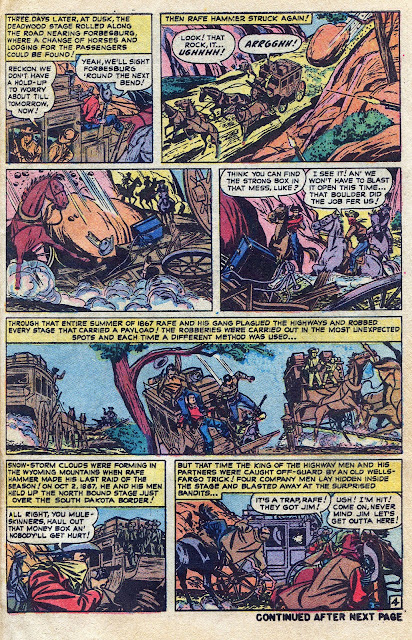 In Texas, Rafe Hammer continues to rob stagecoaches, still never using the same method twice.  In desperation, Well Fargo turns to the Pinkerton Detective Agency and the Pinkertons send their best man to Texas to end Hammer's string of thefts. 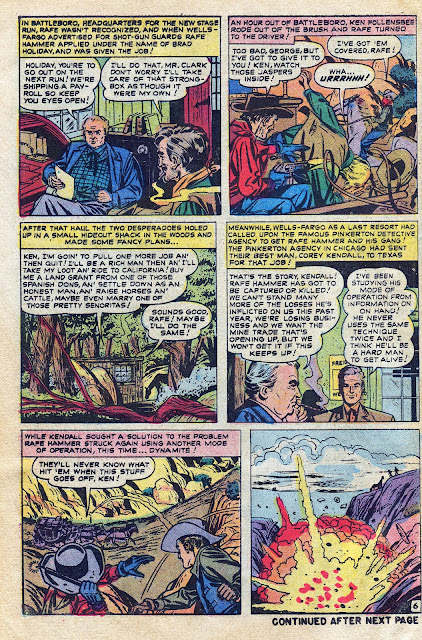 The Pinkerton man finally figures out the weak part of Hammer's method. . .that he always opens the cash box at the scene of the crime.  Armed with this knowledge, a trap is set for the outlaw and baited with a rumor of a million dollars' worth of gold.  In the end, Rafe Hammer's greed ends with his brutal death from a booby-trapped cash box full of explosives. 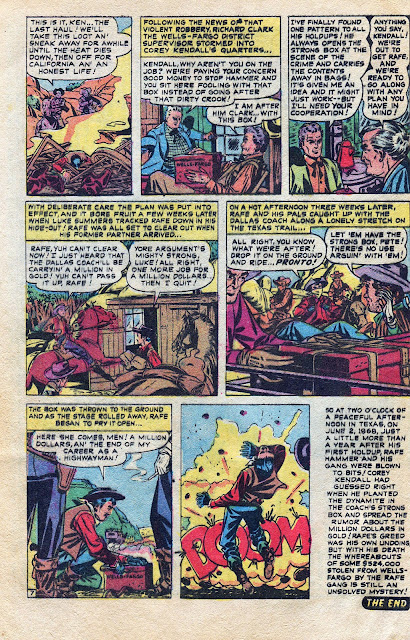 To tell the truth, I liked this backup quite a bit more than the main story.  What hooked me into this one is the way that it's presented as a true tale of a gen-u-wine Western Outlaw.  After I got done reading it, I hit the internet to find out more about Rafe Hammer and discovered that he doesn't exist.  Somehow, learning that just made the story better!

The writer isn't named (and I couldn't find out any information on who it was), but he definitely gave me an interesting tale that made me want to know more.  For a story that's almost 70 years old. . .credit where credit is due!

The art (POSSIBLY by Al Hartley) really helps sell the "True Story" angle by being realistic, gritty, and not at all exaggerated or "heroic" as in the swashbuckling adventure of the main story.

Overall, I found this backup to be a great example of western comic storytelling during its Golden Age 1950's heyday.  It's a well-told story that made me want more, backed up by some surprisingly good (for the era) art.

It IS a bit wordy. . .as you can see from the page scans that are absolutely crowded with dialogue, and there's a touch of the inescapable casual racism you're going to find in almost ANY comic from the 1950's. 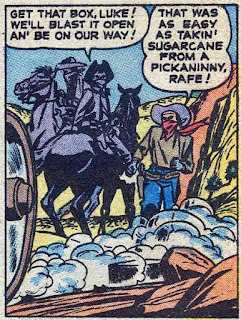 But other than those two things, I really enjoyed this story and found it to be better than the main feature.

The first is an adventurous "Robin Hood" style outlaw character in some rootin' tootin' western shootin' action. . .which isn't bad, but it's ultimately a pretty forgettable story.

The second is a great example of Golden Age western comic storytelling at its best, with a realistic story backed up by some very nice and gritty art.

Taken together, these two stories form a pretty good comic that still reads well and was pretty enjoyable even so many years after the stories inside were originally published.  The stories aren't perfect. . .the main feature seems a bit "by the numbers" and the backup has a LOT of dialogue crowding the panels. . .but I'd definitely say that Kid Colt #175 is worth a read for fans of western comics.

It's the original Vertigo magic bad boy, John Constantine, in all his "Mature Audiences Only" glory.