Welcome back to my completely unnecessary reboot and renumbering of the Longbox Junk blog! I'm celebrating my 175th comic review that nobody ever asked me for by doing something else nobody ever asked for. . .reviewing the handful of issue #175 comics in my (and my daughter's) collection!

Oddly enough, I've discovered that it seems nobody really cares about hitting their 175th issue. The Walking Dead started a new (and pretty epic) storyline in #175, but I'm not sure if that was actually planned or if it just worked out that way.  Superman #175 was celebrating being the 100th issue since the iconic "Death of Superman" finale. . .but I'm not convinced that's an actual celebration of hitting issue #175.

So. . .nobody cares about the one-seven-five except me.

But I've said it before and I'll say it again.  I ain't a quitter, son.

So even though none of these comics seem to care that they're issue #175, I promised nine of them, and by nine of them you WILL get!  The comic at hand is The Brave and The Bold #175. . .and true to disappointing form, there's absolutely no acknowledgement that this is any sort of "milestone" issue.

The series itself goes back to 1955, featuring unusual team-ups between various DC characters as its main gimmick until the late 60's when it became exclusively a Batman team-up book. By the time issue #175 came out (1981), The Brave and The Bold was toward the end of its run (issue #200) and was just sort of limping toward the finish line.

This era of Brave and Bold was an extremely mixed bag, with story quality ranging from -Awful to Pretty Good.  Of all the issues of Brave and Bold I have after 1980, none of them manage to climb up past "Pretty Good" to the lofty heights of "Good", and most hover around a middle ground of "Decent".

The team-up IDEAS just always seem better than the actual execution of them.  Here, we have the intriguing notion of a Batman / Lois Lane team-up.  I can see the possibilities of a gritty crime story with an out of town reporter following a lead into unfamiliar territory and encountering the Dark Knight Detective along the way.  Can The Brave and The Bold #175 deliver on the promise of this interesting combination of characters? 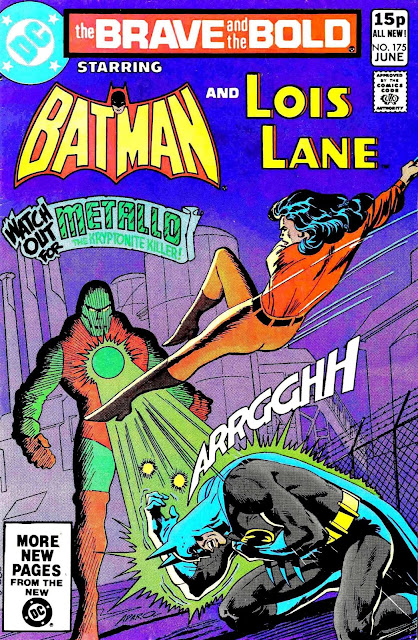 THE HEART OF THE MONSTER

Okay.  As usual, let's take a quick look at the cover before we get into the story. . .

I have to admit, this isn't a great cover.  It's not BAD or badly-drawn.  It actually does sort of have to do with what's inside the comic, which is a bit unusual for Brave and Bold.  It's just. . .meh.

I can't put my finger on exactly WHAT makes it "meh".  Maybe too much clash in the colors. . .purple, green, yellow, red, blue and orange competing for attention on the same cover?  Maybe the underwhelming villain?  I don't know.  All I DO know is that this isn't the kind of cover I'm excited to hang on my office wall as part of my rotating comic cover display.

We jump right into the action with Batman confronting Metallo on a Gotham rooftop.  Metallo monologues a bit about how powerful his robot body is, but Batman is like "Yeah, but if I remember, you've still got a human head, right?" 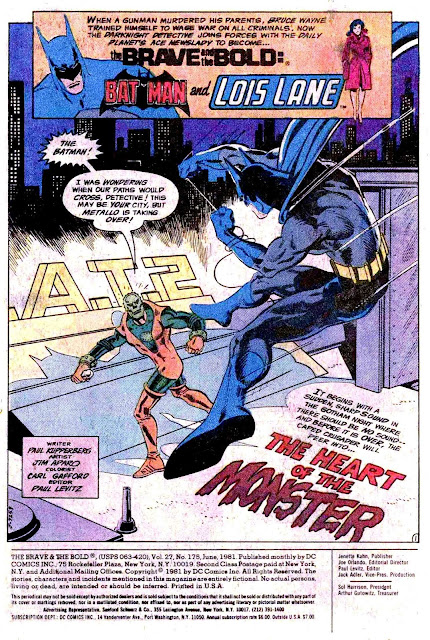 And he immediately reinforces that bit of knowledge with a brutal kick to the head, the likes of which we don't get to see Batman doing much these days.  I sort of like the days when Batman would inform someone he was going to kick them in the head before grinning and giving them a kick to the head like it's his favorite thing to do. 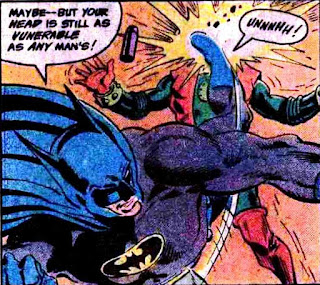 The fight goes on, but Batman obviously has the advantage in hand-to-hand combat against a cyborg who's used to shooting beams at Superman instead of trading blows with a guy who smiles while spin-kicking you in the face.

Batman seems to have the fight well in hand by delivering some sweet wrestling moves. . .because he can. . .so Metallo decides to go with the tried and true beam attack.  Batman laughs it off at first, knowing that the beam is Kryptonite and can't harm humans, but Metallo has the last laugh as the beam hits Batman hard and takes him down!

Metallo escapes, and after Batman recovers, he places the Cyborg's name right at the top of his "People who need to be repeatedly kicked in the face ASAP" list. . . 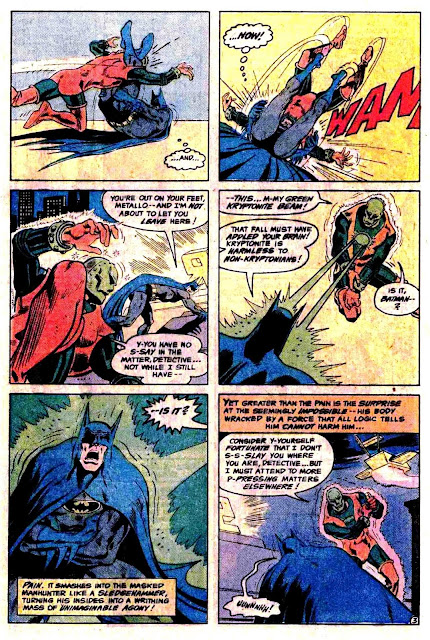 The scene shifts to Wayne Enterprises, where Metropolis reporter Lois Lane is meeting with Bruce Wayne.  She's trying to get him to put her in touch with Batman because she's following a lead on a SKULL cell working out of Gotham City.  SKULL is the shady organization that put Metallo's human head on a robot body, trying to make him into a weapon to use on Superman against his will.  Metallo is NOT happy with SKULL.

After discussing a break-in at S.T.A.R. Labs where some Uranium was stolen, and a SKULL scientist hiding in Gotham willing to turn himself in to authorities through Lois Lane, Bruce begins to connect the dots as to why Metallo is in Gotham, and agrees to "get in touch with Batman" for Lois. 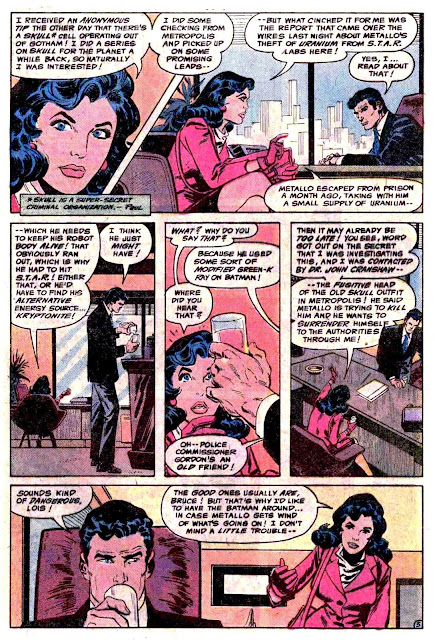 Batman sneaks into Lois Lane's room and agrees to help protect her while she meets with the fugitive scientist in case Metallo shows up. . .and he does.  Batman waits for Metallo to monologue about how the scientists who put his head on a robot body didn't do a good job with his Uranium-Powered "Heart", and the leaking radiation is killing his human brain.  After he's heard enough, Batman jumps back in for round 2 against the rampaging cyborg. 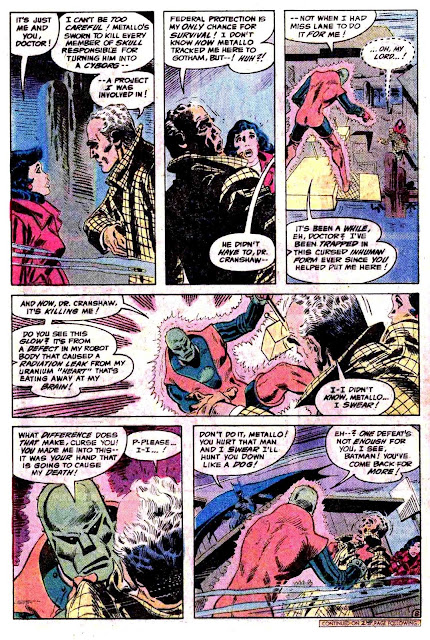 Unfortunately for Batman, Metallo takes him down a second time.  Lois Lane throws a trash can at him. . .which has exactly as much effect on the cyborg as you would think.  None.  Metallo just sort of mocks her as he rides off with both Batman and the SKULL scientist. 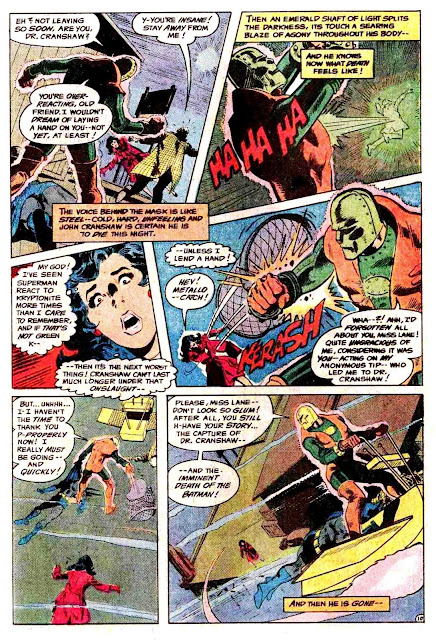 At Metallo's hidden villain lair beneath S.T.A.R. Labs, Batman is tied up and forced to listen to Metallo monologue about how he managed to modify his Kryptonite beam to affect humans, and then rant about how he was going to force the SKULL scientist to fix his malfunctioning "heart" before killing him, and there's nothing Batman can do because Metallo has taken his utility belt!

After Metallo leaves, the Caped Crusader grins and quickly escapes. 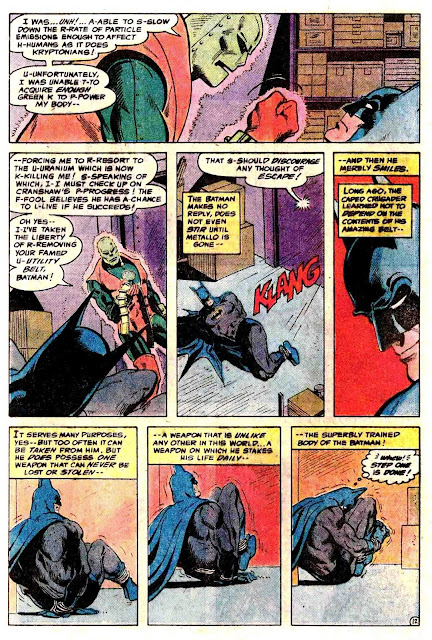 While Batman is making his escape, Metallo is forcing the former SKULL scientist to improve the shielding on his uranium "heart".  On his security monitors Metallo sees Batman is on the loose.  He unleashes a giant purple robot to delay the Caped Crusader. . .but if there's one thing 80's Batman is good at besides kicking people in the face, it's defeating giant robots!

As it is, Bronze Age Batman has taken down SO many giant robots that he's got it down to a routine and hardly even breaks a sweat taking care of  business as he makes his way toward Metallo's lab. . . 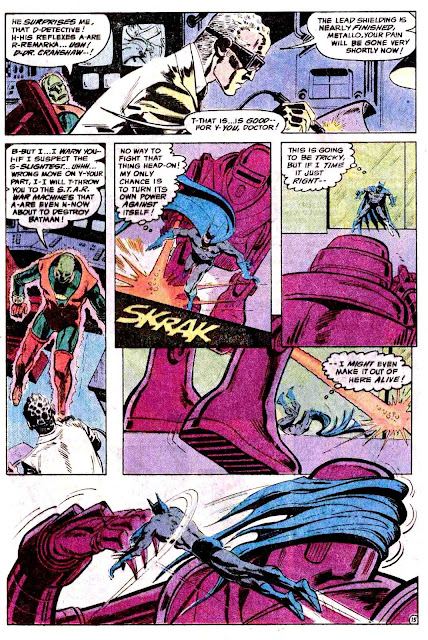 Batman jumps into the final confrontation with Metallo, who now is at full supervillain power, thanks to the hasty repairs of the SKULL scientist.  As Metallo has Batman down and is really pouring the modified Kryptonite energy on. . .determined to end the Dark Knight once and for all. . .Lois jumps out of an overhead vent and serves up a kick to the head of her own!

An angered Metallo ramps up to full power, but the shielding on his heart explodes.  Taking Metallo down for the count.  The SKULL scientist pulls a gun and gleefully informs Batman and Lois that he did that on purpose, thank you very much. . .and now that Metallo is out of the picture, there's no need for him to turn himself in, so he'll just be going now.

Number one. . .Batman doesn't care if you just saved his life.  You're still a criminal.

Number two. . .you do NOT pull a gun on Batman.

Batman easily disarms the scientist with a "Thanks, but you're going to jail now." before handcuffing him to a desk and leaving with Lois to find a phone. 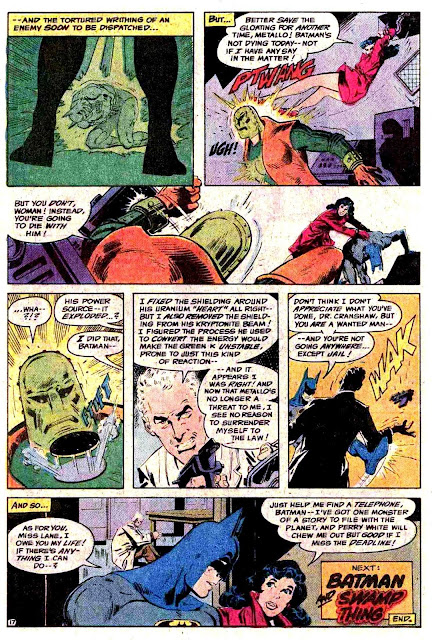 There's also a backup story in this issue, which is the 3rd part of a 4 part story starring "Nemesis"

I DO have the next (concluding) issue, but neither of the first two parts. . .so I'm a bit lost on what's going on in the backup.  It's set in England and there's a kidnapping to be foiled, is about it.

Nemesis seems to be some sort of super-spy and master of disguise. . .whose face-changing ability seems suspiciously similar in application to that of The Question (Who didn't become a DC character until they bought out Charlton in 1983).  And when I say "similar" I mean "exactly the same".

Even though I didn't really know what was going on, I liked the look and style of the Nemesis story enough to make me curious about reading more.  It has a gritty James Bond feel to it, with no superheroes.  A bit of an odd direction for mainstream early 80's DC.  It also has better artwork than the main story.  To tell the truth, the backup interested me more than the main story! 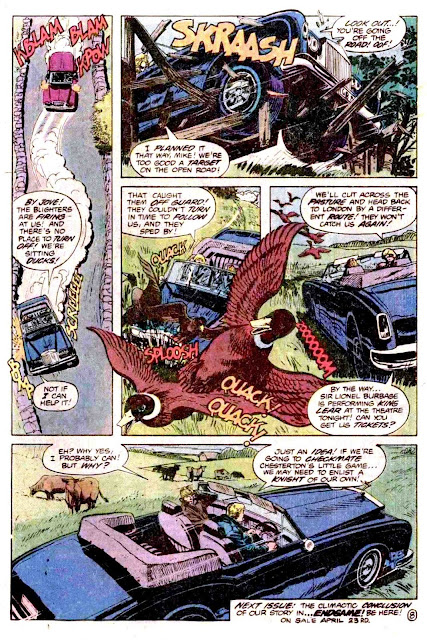 A nice car chase scene from the backup

So that was The Brave and The Bold #175.  Batman and Lois Lane vs. Metallo.  Let's break it on down!

Like I said in the introduction, Brave and Bold was on its last legs at this point.  The stories rarely reached "Pretty Good" in quality.  This issue is no exception.  If I had to describe it in one word, that word would be: Decent.

It's not a BAD story. . .but it's also not a very good one.  It just sort of hovers in a forgettable grey zone that a lot of DC's late Bronze Age comics inhabit.  The POTENTIAL was there for a good story, but Lois Lane was almost an afterthought and frankly, Metallo is just sort of a weak villain that they had to temporarily retcon just to cram him in here.  Throw in some cliche giant robot fighting and what you have is an utterly unremarkable story.

The art isn't bad.  But like the story, it's not that good either.  It's typical Jim Aparo artwork. I have to admit that it seems Aparo does a LITTLE better job than usual in not making every face look the same, but this is mostly another example of DC's favorite 80's workhorse artist throwing another unremarkable issue onto the gigantic pile of unremarkable issues Aparo put out in his heyday.

Overall, this is the kind of story that nobody remembers.  From what I can see from a quick search, as far as I can tell I'm the only person who has ever bothered to review this comic.  It's pretty much the definition of Longbox Junk. . .a comic that nobody cares about and sits forgotten until I do a review that nobody ever asked me for.

I feel sort of bad for this comic, in a way.  People put work into it.  Writing it, drawing it, coloring it, editing it, printing it. . .so on and so forth.  But at the end of the day, once this review is done. . .it's probably never getting another one.  It's sad when you think about it. But then again, when you actually read the comic and see the minimum effort put into it, you realize that it was never meant for greatness. In the words of the great Ted Knight in Caddyshack: "The world needs ditch diggers too."

Steppin' back to 1973 for some rootin' tootin' racism!