Sorry this is dropping a bit later than usual.  I took a few vacation days from work.  Because I deserve it.

Let's pause for a moment so I can make a terrible confession. . .

There.  I said it and I'm not ashamed.  I know. . .I know. . .as a die-hard fan and collector of this wonderful form of art we call comic books, I know I'm SUPPOSED to like Superman.  Heck, the Big Blue Boy Scout is what started the whole "Super-Hero" thing.  Superman is such a part of American culture that people who have never read a comic book in their life know who Superman is and what he stands for. . .TRUTH, JUSTICE, and THE AMERICAN WAY!

Superman is as much a part of America as Baseball, Apple Pie and the 4th of July.  You can say you don't like the Superman MOVIES, but if you tell someone you don't like Superman in general, they tend to give you a sort of "What kind of Commie ARE you?" look.

Now don't get me wrong.  I don't HATE Superman.  It's just that I like my comic characters to be a little more. . .grounded.  A little more "realistic" as far as THAT goes in comic books.  Characters like Green Hornet, Zorro, The Spirit, Lone Ranger, Turok, Black Widow, Conan and Punisher are more my speed.

Captain America, Daredevil, The Shadow, and Batman are about as far toward the Superman end of the Superhero Power Meter as I get if Jonah Hex is on one end and Superman is on the other.

Like I said, I don't HATE Superman, and there ARE a few Superman stories out there that I really like. A good creative team CAN dig deep past cliche and pull off a decent Superman story.  Is the issue at hand one of them?  Let's find out! 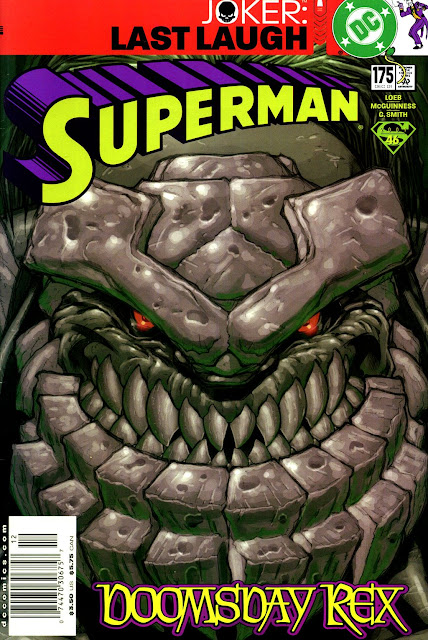 Let's take a look at the cover before we get into the story.  Hmmmm. . .to be honest, it's a bit underwhelming.  It's drawn well, and let's you know that Doomsday is going to be in the comic, but other than that. . .Meh.  What IS interesting is that big red bar advertising this comic as part of "Joker: Last Laugh".

The idea of  Joker in a Superman story sort of grabbed my attention, so I Wiki'd up and discovered that "Last Laugh" was a crossover event running through DC comics at the time, where Joker thought he was dying and decided to go out with a bang by trying to create his own "Crisis".  He started off by using a new form of Joker gas to "Jokerize" a lot of superheroes' biggest enemies, and then it escalated out of control from there.

As I read more of the Wiki on "Last Laugh" the more of a mess it seemed to turn into.  Thankfully, this is pretty much a token entry in the crossover and "Last Laugh" is only involved for a couple of pages. . .and that's a good thing because this comic is ALSO a sort of epilogue to ANOTHER crossover DC was doing at the time called "Our Worlds at War", which mostly involved Superman and Wonder Woman, but also involved just about everyone else in some way as it went on.

Basically, it was a sort of "Alien Overlord Wanting to Dominate Earth" story that's been done over and over.  I just mention it because there's a lot of references to the recent global conflict through this comic.  From the Wikipedia entry on "Our Worlds at War", it looks like a hot mess that I don't feel bad for knowing nothing about.

So this ONE comic is part of TWO largely-forgotten crossovers that don't have a bit of impact on current DC continuity, and my cover discussion didn't have much to do with the cover, so there's that.

We start off with 4 pages of Joker breaking into a heavily-secured vault beneath the Pentagon and releasing some sort of giant humanoid creature. . .aaaaaand that's it for the "Joker: Last Laugh" crossover bits.  Like I said above, this seems like a token entry in that particular story, just to say it crossed over into Superman. . .but I digress! 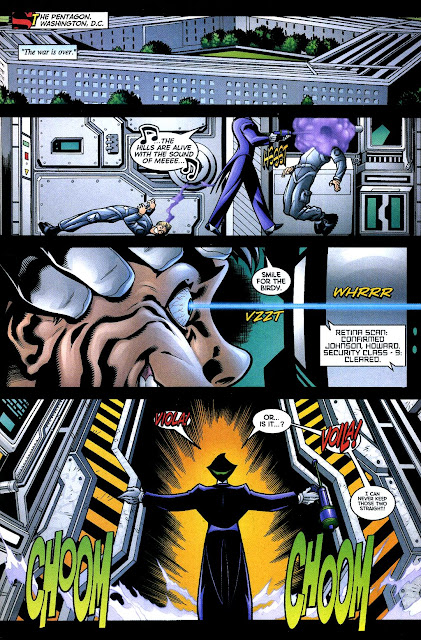 We cut to a GLORIOUS full title page shot of the Man of Steel looking as patriotic as possible as he flies with an American flag through the sky of Washington D.C.  He's replacing the flag on top of the White House after the recent events of "Our Worlds at War", where the nation's capital took a lot of damage. . .aaaaaand that's sort of it for the "Our Worlds at War" Epilogue, except for a running caption box speech being made by President Lex Luthor that goes through the whole issue, talking about the nation's recovery after the War and a couple of pages at the end with Luthor and Darksied.

One thing that DID catch my eye on this fantastic title page is over on the left-hand side where it informs us that not only is this ONE comic part of TWO crossovers, but it's ALSO celebrating the 100th issue since the landmark "Death of Superman" story.  So even though this issue isn't celebrating being #175, it's celebrating something IN issue #175.  So there's that.

But I digress (again)! 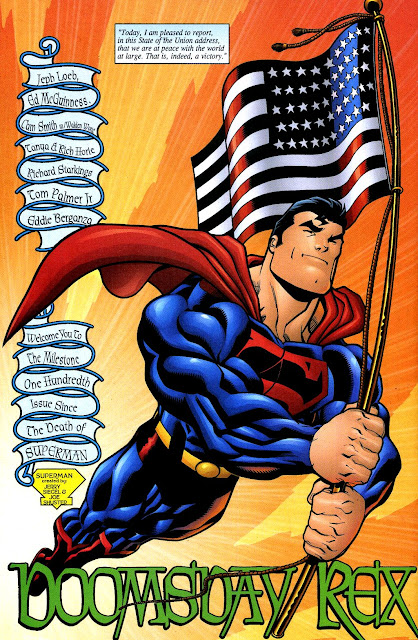 We jump right into the action as the press conference is interrupted by a gigantic creature bursting out of the ground and attacking.  It's the same creature that was released by Joker from the vault under the Pentagon.

It turns out that as part of rebuilding the White House, President Luthor has turned it into a sort of armed fortress, with hidden guns popping out of the lawn and from the building itself to fire on the mysterious creature.  Unfortunately, they don't have any effect. . . 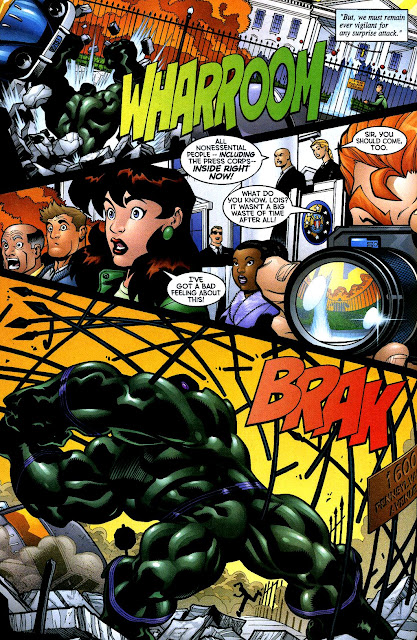 . . .so it's a good thing that Superman happened to be there as part of the ceremony!  He swoops in to drag the creature away from the innocent bystanders, but quickly discovers that the creature's strength equals his own as he is thrown across the National Mall and into the dome of the Capital Building. 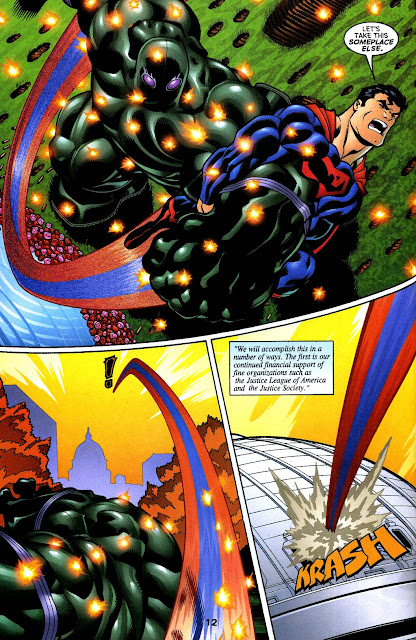 It's ON!  Superman flies back into the battle and the two fight for a while before Superman is able to destroy enough of the suit concealing the creature to realize that he's fighting none other than DOOMSDAY!  Superman is a bit confused, because Doomsday supposedly died during the events of "Our Worlds at War".  But confusion aside. . .this is STILL a job for Superman! 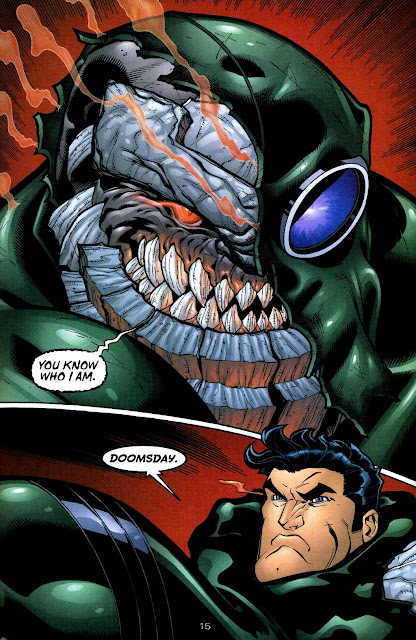 Superman and Doomsday fight their way through the White House as Doomsday tries to get to the Oval Office and President Luthor.  They not only have to battle each other, but also Luthor's new defenses, many of which use Kryptonite.  Eventually, Doomsday is able to land what seems to be a killing blow on a Kryptonite-weakened Superman. . .and with the Man of Steel down, Doomsday makes his way unopposed to the President. . . 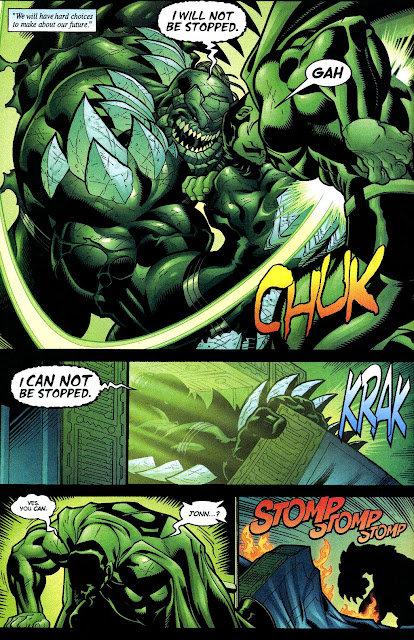 Luckily for President Luthor, the Justice League has planted a spy in his administration. . .the one and only Martian Manhunter disguised as one of Luthor's aides.  He reveals himself and joins the battle as Doomsday breaches the Oval Office.  Martian Manhunter holds his own for a while, but unfortunately he's no Superman and Doomsday defeats him. . . 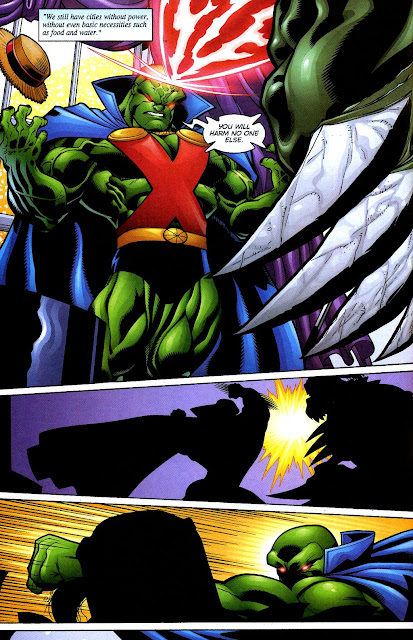 . . .managing to buy another Justice Leaguer on the scene, Black Lightning, enough time to use his powers to shock Superman back to consciousness.  As Superman comes to and learns of the dire situation, he rejoins the battle. . .knowing he's the only one who can defeat Doomsday, even if it means giving up his own life! 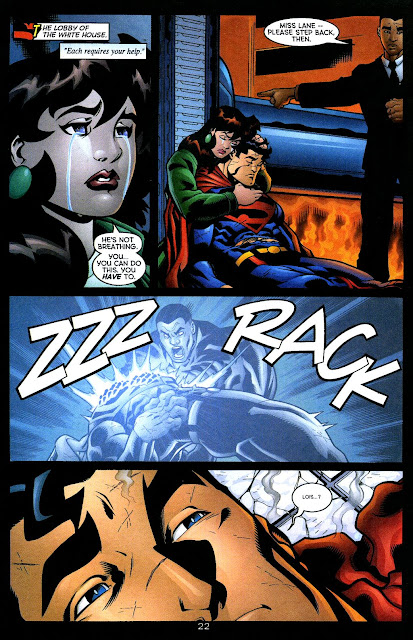 Superman manages to reach the Oval Office in time to save President Luthor and throw Doomsday across the National Mall and into the Lincoln Memorial.  As the two mortal enemies face off, Superman informs Doomsday that this is IT.  It's time to finish their fight once and for all.  It's definitely a great scene! 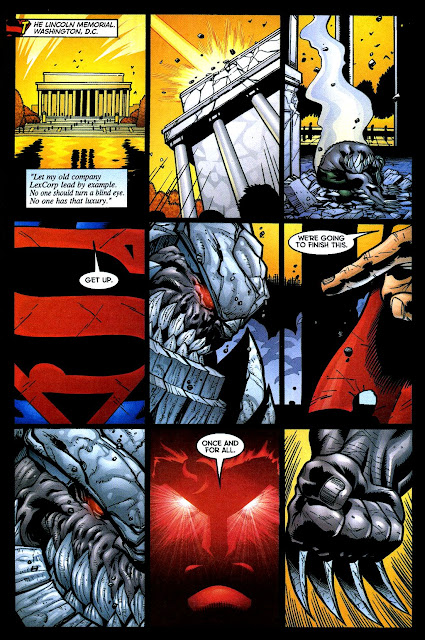 During their previous battle in the White House, Superman discovered a new weakness in Doomsday.  Now that he has somehow become intelligent and aware, he knows the possibility of being defeated.  Before, when Doomsday was just a rampaging monster, he knew no fear.  He knew no possibility of anything other than destroying his target.

Superman uses his knowledge of that new weakness to get inside of Doomsday's head as they fight and mentally wear him down by telling him he's going to either die or be imprisoned.  Eventually, Doomsday hesitates and Superman is able to deliver a mighty finishing blow! 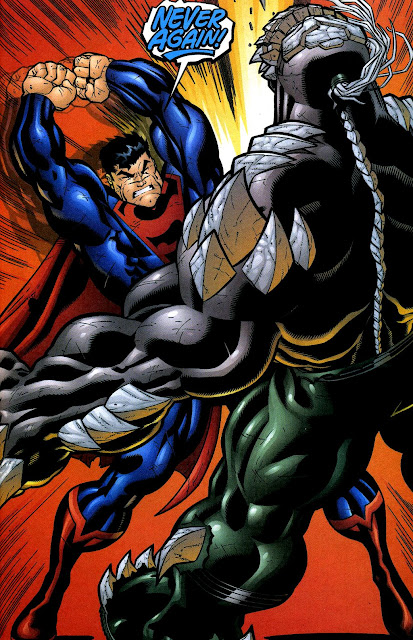 With Superman victorious and the President safe, Doomsday is once again delivered into the custody of the government. . .but what Superman doesn't realize is that the whole attack was (of course) a scheme by Luthor to trade Doomsday to Darkseid in a secret exchange for Darkseid's assistance rendered during the events of "Our Worlds at War" that made victory possible.  The battle with Superman was a demonstration of Doomsday's power as a weapon for Darkseid before the trade was finalized. 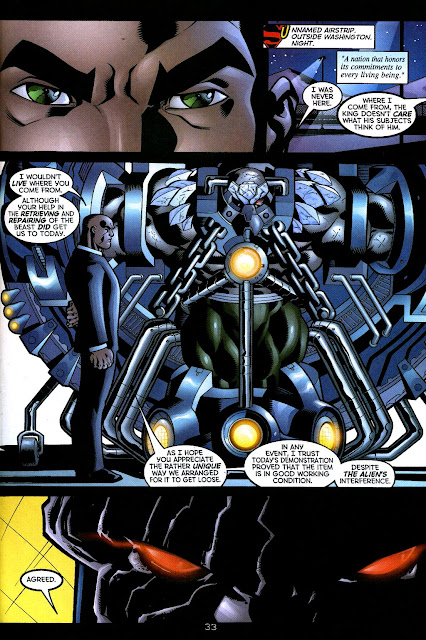 But Superman isn't aware of Luthor and Darkseid's deal.  Instead, he heads back to Kansas to spend some time with his family and appreciate the little things that make being a hero worth it. . .like peacefully enjoying a sunset with his father. 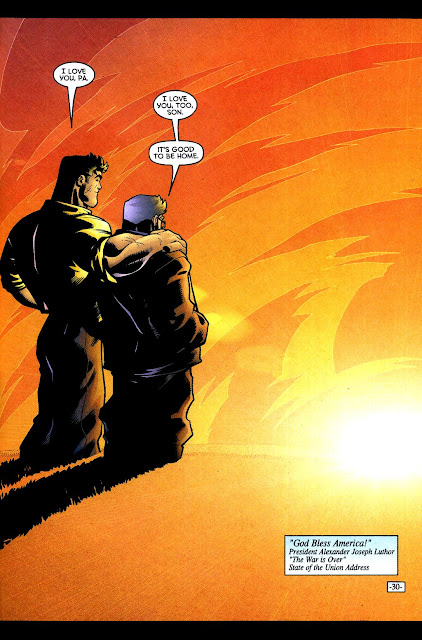 Like I said in the intro, I don't really like Superman. . .but I have to admit, I liked this issue a lot!

It's basically one long fight scene, but there's just something about it that I really enjoyed, and that something is FUN.  Sure, this issue had moments of drama and darkness, but overall it's just plain old fashioned superhero FUN!

Fun is definitely something that's missing in a lot of comics these days.  I found myself grinning and flipping these pages quick as Superman and Doomsday punched each other across the National Mall.

There's no great underlying story here.  The crossover parts can practically be ignored.  This was just a good Superhero vs. Monster fight with a lot of epic moments in it. . .

The title page. . .The reveal of Doomsday. . .Martain Manhunter joining the battle. . .Superman telling Doomsday that this is IT. . .Superman's finishing blow on Doomsday. . .that final page of Superman and his father. . .all great moments that make this comic a lot of fun to read!

The art also compliments the story very well.  I really like the chunky, boldly-inked art style Ed McGuinness brings to the table here.  I think maybe he overdoes it a bit on the muscles, but other than that, the artwork is PERFECT for this story.

Is this a perfect comic book?  No.  Even though the crossover parts are fairly small, they still intrude a bit on what is otherwise a great one issue story.  But that small complaint aside, I can't find much else wrong to be found here.  It's a simple and fast read backed up by some great, colorful comic art.

Look. . .sometimes we comic readers and collectors need to be reminded of the kind of FUN that comic books can be.  This is a good issue to get that reminder from.  I may not like Superman much, but I'm glad I came across this issue.  It's a good one.

It's another "Retro Review" Variant!

Batman and Lois Lane team up against Metallo!