Welcome back to my unnecessary reboot and renumbering of the Longbox Junk blog! I'm celebrating hitting my 175th post by looking at comics in my (and my daughter's) collection that managed to hit that big one-seven-five as well. . .even though so far, it seems that nobody seems to care enough about getting to 175 issues to make even a mention of it.

This time out, I'm taking a look at Spawn #175.  Spawn is a character that I REALLY liked a lot when he first came out.  I was fully on board for about 20 issues before I fell off the Spawn wagon.

Not really sure WHY I quit subscribing to Spawn, but except for that first handful of issues, I've only gotten Spawn comics if they happen to have a cover that catches my eye or if I accidentally get one in a random comic pack (My LCS has packs of 10 comics for 5 bucks. . .but you can only see the top and bottom comic.  They're like Longbox Junk lottery tickets.  Some are winners, but most of the time I just waste 5 bucks).

This comic was actually in my daughter's collection, so I'm assuming it was one of her accidental buys, because she told me I could have it without a trade.

So it's a Spawn comic.  Let's talk about Spawn for a moment.

At its heart, Spawn is about a guy who made a deal with the devil and got screwed.  The main character is Al Simmons, a military bada$$ who is betrayed by a friend and killed.  He ends up in and makes a deal with a demonic being. . .in exchange for his servitude in leading the demon's armies, Simmons can return to Earth for a limited time.

Unfortunately, right off the bat Simmons realizes he made a rotten deal because not only is he sent back to Earth 5 years later, when his wife has moved on and married his best friend, but his face and body are so hideously burned that anyone who sees him assumes he's a monster.  To make matters worse, he's forced to wear a ridiculously-elaborate costume.  To be fair, the costume gives him supernatural powers. . .but every time he uses those powers, his time on Earth gets cut short a little bit.

In other words, his entire reason for coming back (to be with his wife) is out the window, along with any other chance of having a normal life on Earth.  With nothing better to do, Simmons turns into a dark and brutal vigilante. . .mostly protecting the homeless people he lives with in his early days before becoming embroiled in attacks from both Heaven and , who see him as a danger.

Of course, THAT'S based on the first handful of issues.  The series is currently sitting at 295 (!) issues and (based on the few more recent issues I have) the story is pretty much unreadable to anyone who hasn't been keeping up.  That said. . .the first issues I have are a VERY readable dark and gritty tale of a supernatural-powered anti-hero that made an extremely crappy deal with a demon.

The issue at hand doesn't really have anything to do with Al Simmons.  It's the second part of a 2 part standalone story set in the old west and featuring Al's Great Grandfather, Henry Simmons (AKA Francis Parker).  It seems that dealing with demons was sort of an ongoing theme with the Simmons family.   Let's pick it up from there. . . 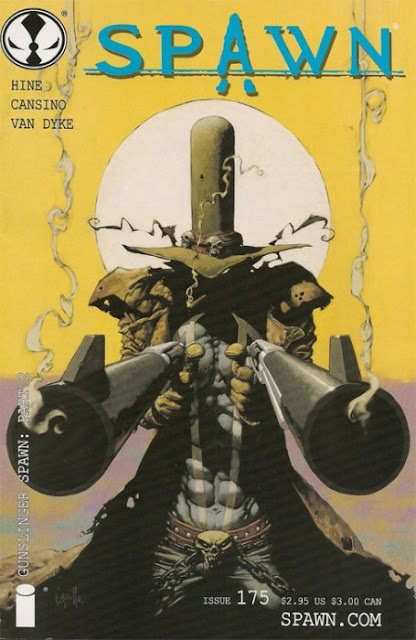 Let's start off with the cover.  When I first saw this, I was thinking maybe Simon Bisley.  I was a bit surprised to see that it's by Greg Capullo.  I'm mostly familiar with Capullo's work on New52 Batman, and this is NOTHING like that.  That said. . .it's okay.  I like the eye-catching "in your face" perspective and the super contrast with the bright background.  The hat looks a little silly, but other than that, this is a cover I would call. . .interesting.  Not really frameworthy, but not bad.

Right off the bat, I'm hit by a SIX LARGE PARAGRAPHS "Previously In Spawn".  I'll just throw the whole thing in here instead of trying to summarize it. . .because I can tell it's ALREADY extremely summarized. 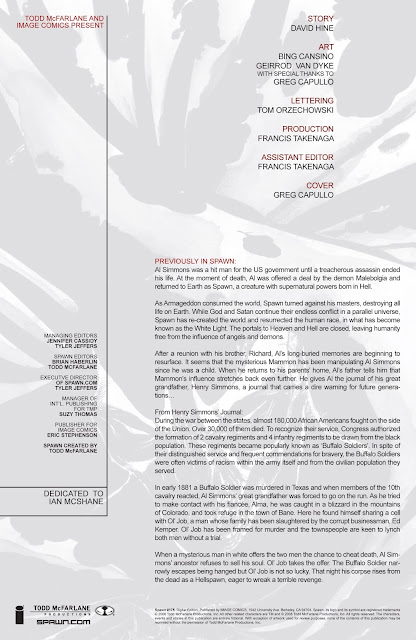 But if that's too small for you to read, the parts that apply to this issue at hand are basically that cavalry soldier Francis Parker was forced to go on the run for a murder he didn't commit.  While trying to get back home to his fiancee, he was caught in a blizzard and took shelter in the Colorado town of Bane.

Somehow, Francis found himself sharing a jail cell with a man called Ol' Job, whose family has been killed by a corrupt businessman named Ed Kemper.  Job has been framed for the murder and the townfolk are planning on hanging both him and Parker without a trial.

A mysterious man in white offers the two prisoners a chance to cheat death.  Parker declines and Job accepts.  Francis escapes being hanged, but Job is lynched.  That night, Job's corpse rises from the dead as a Spawn and ready to wreak a terrible revenge. . .

Okay.  NOW let's get into this issue.

We jump into the story at the Lucky Strike Saloon, where Ed Kemper and his associates are congratulating themselves on a successful frame for murder and lynching of Ol' Job so that Kemper can claim his land.  Sounds of gunfire from upstairs interrupt the party. . . 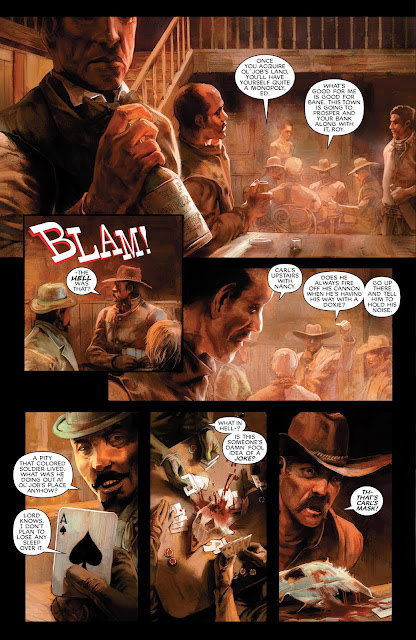 A demonic creature opens fire on Kemper and company, laying waste to his associates and causing the crooked businessman to flee the saloon for his life.  After being hit by what SHOULD be a fatal shot, the creature seems confused that he seemingly can't be killed. . . 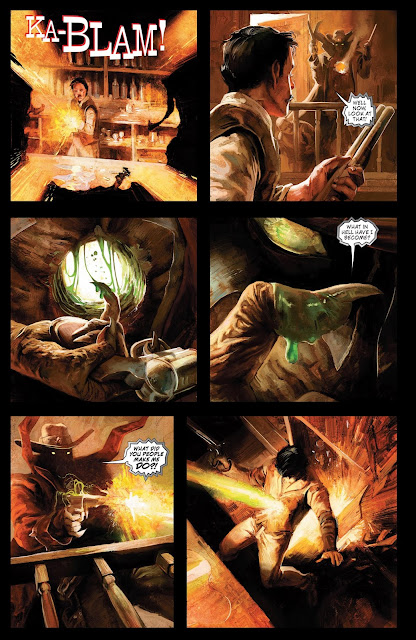 Realizing that it can't die, the creature goes into a rage and kills everyone left in the saloon, then heads outside and starts killing any townfolk who he sees. . . 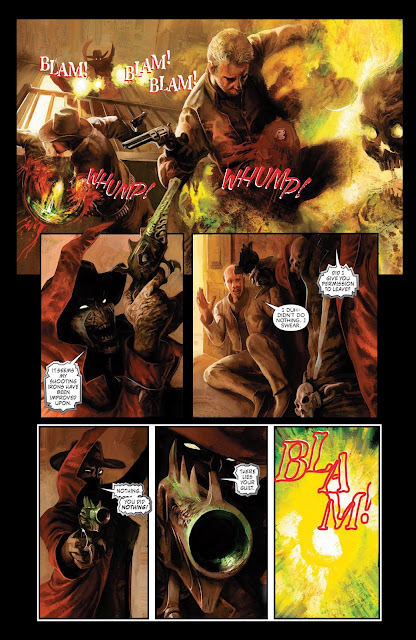 In the meantime, Francis Parker wakes up in jail to the sound of gunfire.  Seeing the strange nature of the fire engulfing the saloon, and hearing a dying man saying Ol' Job's name, Parker remembers the strange man in white and realizes what's happening.

He manages to convince the sheriff to free him and give him a rifle to try and help fight the demonic creature as it begins killing the rest of the townfolk.  Unfortunately, Parker quickly learns that regular bullets do no harm to the creature. . . 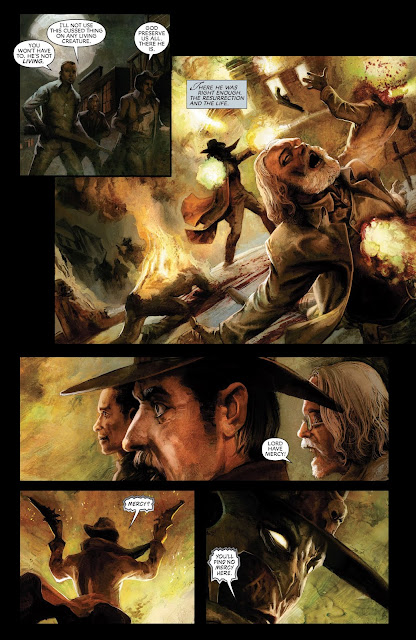 The creature that Ol' Job has become finds his family's killer (Ed Kemper) in his hiding place and exacts retribution with the assistance of some dynamite. . .but Ol' Job isn't finished with his revenge yet.  He intends to kill every man, woman, and child in the town of Bane. . . 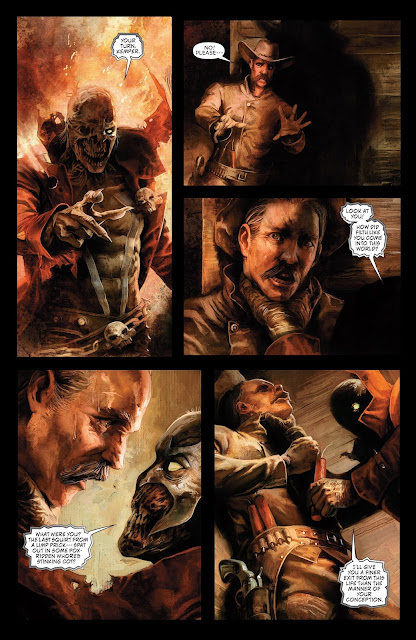 Parker and the sheriff desperately send a telegraph message for help, knowing that it won't arrive in time to save any of them.  The Sheriff tells Parker that he reported Parker as dead, so if he wants to make a run for it, he can survive a free man.  Parker decides to stay and see things through. . . 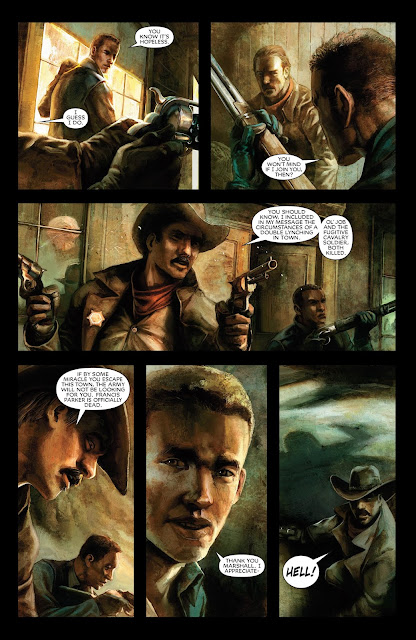 Unfortunately for the Sheriff, the creature attacks and kills him, but when Ol' Job turns his attention to Parker, the man in white suddenly appears and tells Job that he can kill everyone in town except Parker. . . 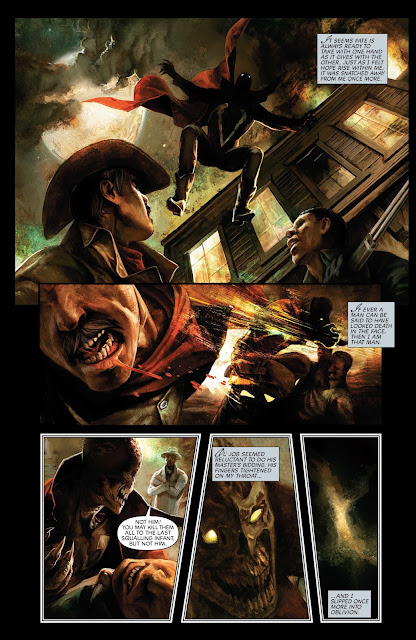 After Ol' Job is finished killing everyone down to the smallest child in Bane, he drags a terrified Parker through the carnage in a coffin, then pushes him over a waterfall. . . 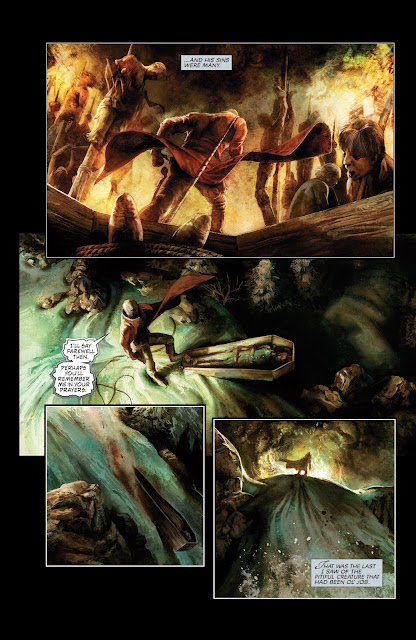 At the bottom of the waterfall, a shaken Parker is freed by the man in white, who informs Parker that HE's the one the man in white really wanted.  The seed of the most powerful HellSpawn of all lies in him, and will come forth sometime in the future. . . 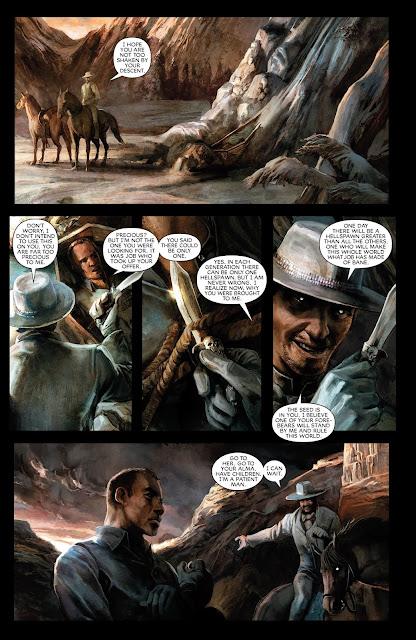 After the man in white departs, Parker finds a receipt in the coffin with the name Henry Simmons on it.  Parker takes the dead man's name for himself and flees Colorado.  We see at the end of things that this has been an account in Henry Simmons' journal meant as a warning for his descendants. . . 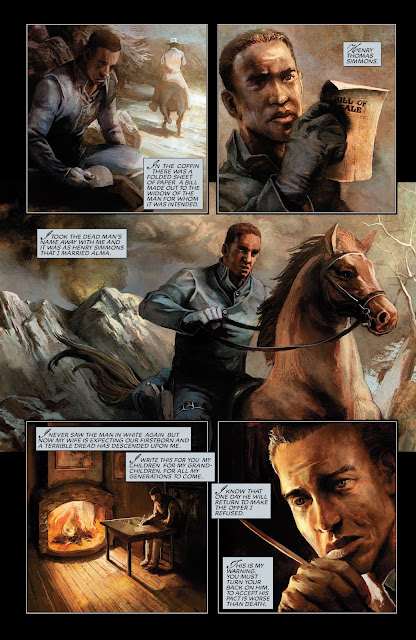 Okay then.  Wild West Spawn, eh?  Let's break it on down!

The art in this issue is AMAZING!  I really liked the unusual thick-brushed painted style.  The muted colors set off by occasional bright splashes really sell the old west setting.  The art has a wonderful flow and amount of detail that I would expect to find in a premium graphic novel instead of a random comic issue.  A simply amazing job by Bing Cansino & Geirrod Van , and definitely the best part of this comic.

To tell the truth, it's pretty thin.  It's mostly just the HellSpawn laying waste to the town that killed him and his family and the revelation at the end that one of Francis Parker's descendants will be an even more powerful Spawn.  That said. . .I liked it.

This is the second half of a 2 parter, and I can tell from the dialogue that most of the first half was setup for the Spawn's vengeance on the town.  I have the feeling that, taken as a whole, this would have been a better story if I was able to read the first half of it.

What I liked about this was that it's possible to enjoy it on its own as a supernatural western horror story without knowing the Spawn continuity.   Westerns with a tinge of horror or supernatural elements are some of my favorite stories. . .things like the Vertigo Jonah Hex titles, El Diablo in Weird Western Tales, and Image's Desperadoes (among others I can't think of off the top of my head).

Coming from there, this would make a pretty good story without a bit of Spawn connection just as the terrifying tale of a man who witnesses a man rise from the dead as an unstoppable supernatural creature that slaughters an entire town for revenge.

So in that, Spawn #175 is good (better if I'd been able to read the first part).  As far as it being a good Spawn comic?  Based on my (admittedly slim) knowledge of Spawn. . .I'd say that to a regular reader this would probably be a couple of filler issues unnecessarily retconning a part of Spawn's origin story.

By establishing that has ALWAYS had an interest in the Simmons family, this story sort of downplays the whole "Guy who accidentally made a sucker deal with a demon and decides to spit in the eye of fate by using evil powers to be a hero" origin of Spawn in favor of a cliche "chosen one" scenario.

Spawn #175 is a pretty good supernatural horror Western story backed up by some simply amazing painted art that looks more like it belongs in a premium graphic novel than in a random comic issue.

I'm not so sure it's a good Spawn story, though.  It sort of feels like a filler story patching a hole that doesn't really need patching and ultimately undermining the origin story that I remember from the early issues of Spawn.

You want variants? YOU GOT VARIANTS!

The Man of Steel vs. Joker and Doomsday!

It's the kind of superheroic DC-Tastic fun you don't really see any more.