I LOVE a good war comic!

It's a genre that used to be one of the biggest in comics, but these days it seems that a good war comic is hard to find.  In order to revisit war comics in their glory days, it becomes necessary to step back a few years.

It's pretty safe to say that the most prolific years for war comics were during the Silver Age, but MY personal favorite era for war comics happens to be the Bronze Age, when comic companies were starting to stretch or even step outside the limits of the Comics Code.  And in that era, I have a particular fondness for DC's war comics.

Sure, Marvel had Sgt. Fury and his Howling Commandos, but I could never really get into it.  It just seemed a bit silly compared to DC's Weird War Tales, Star Spangled War Stories, G.I. Combat, and Our Fighting Forces. Comics featuring great characters like The Unknown Soldier, Enemy Ace, Sgt. Rock & Easy Company, and the crew of the Haunted Tank!

I DO have to admit that Marvel DID hit a war comic home run in the 80's with The 'Nam, but other than that, I never really found much to like in Marvel's war comics.  Now that I'm actually thinking about it, it can probably be chalked up to the fact that the best war comics are actually ANTI-war comics in disguise.

There were a lot of great Bronze Age war comics, but that doesn't mean that every issue of every series was great.  There were a LOT of clunkers and some that were just plain bad.  Take the series at hand for today, DC's G.I. Combat, for example. . .one can't possibly expect a comic series that ran for 288 issues over THIRTY-FIVE YEARS (1952 - 1987) to be ALL good.  It just can't happen.

Turning to the issue at hand. . .part of my unnecessary reboot and renumbering of Longbox Junk. . . we have issue #175 of G.I. Combat coming out right smack in the middle of my Bronze Age Comic sweet spot of 1974-1977 and featuring a tale starring the crew of The Haunted Tank.  Is it going to be one of the good ones?  Or will I endure the bitter taste of Retro Review-Flavored disappointment? 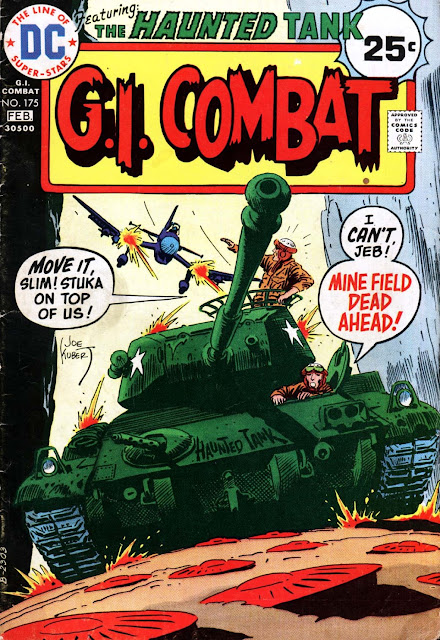 Before we get into the issue itself, let's take a look at that cover.  And what a cover it is!  An in-your-face ground-level point of view shot of The Haunted Tank in double danger from a diving Stuka AND a minefield rendered in glorious manner by the legendary Joe Kubert. . .who happens to be one of my personal favorite top 5 comic artists of all time!

There are those who worship at the Temple of Kirby, and I'm not here to knock the legend of "The King" at all,  but in MY book Kubert is THE MAN when it comes to classic comic art styles, especially when it comes to war comics. . .and he doesn't disappoint here.

Is it the BEST cover ever? No, not at all.  But it's mighty fine in my eyes, and certainly a great example of Bronze Age comic art.

Moving along. . .Let's get into the stories.

There's two of them in this issue.  Same writer, different artists.

While taking a short break from the war, tank Commander Jeb Stuart receives a strange message from the ghostly guardian of The Haunted Tank telling Stuart that before the day is done, he will be fighting under two flags.   After delivering his cryptic message, the ghost departs. . . 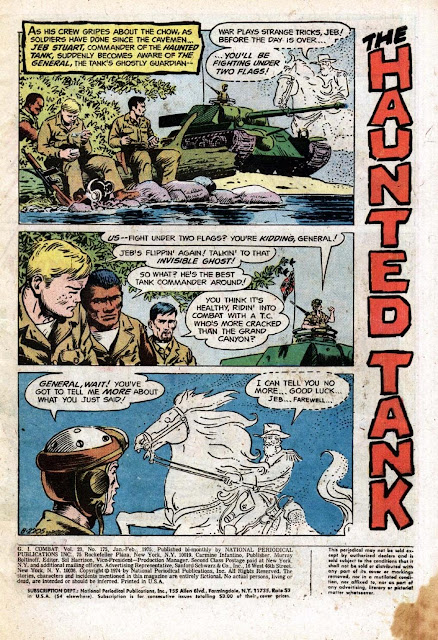 Shortly after receiving the strange message, the crew of The Haunted Tank is called off patrol and into action to support an American advance that has been stalled by a minefield. . . 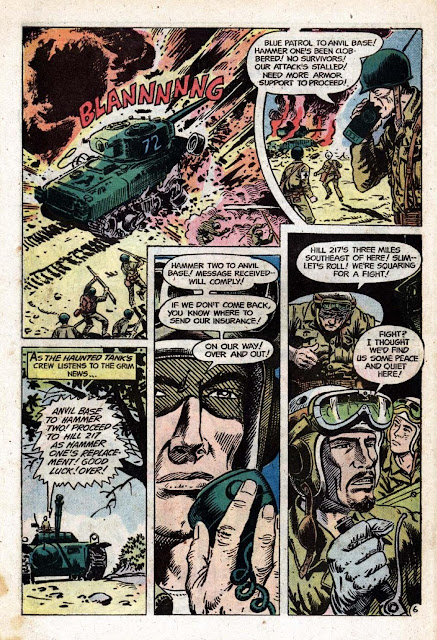 On the way to the battle, they are ambushed by a German tank, but are able to quickly defeat it without taking any damage.  After the battle, the Haunted Tank crew are surprised to find the lone survivor, who is an officer so rattled by the explosion of his tank that he thinks the American tank and crew are Germans! 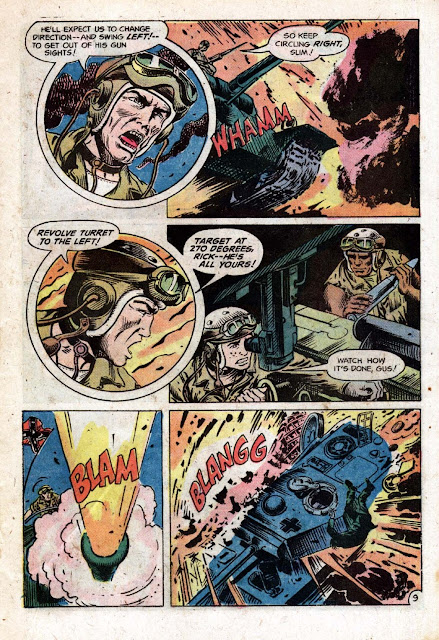 The shell-shocked officer "commandeers" the Haunted Tank and begins directing them through the minefield toward the German position, with the American crew playing along with his delusion.

After moving through the minefield, the finally comes to his senses and grabs the radio to call in support to destroy the American tank. . . 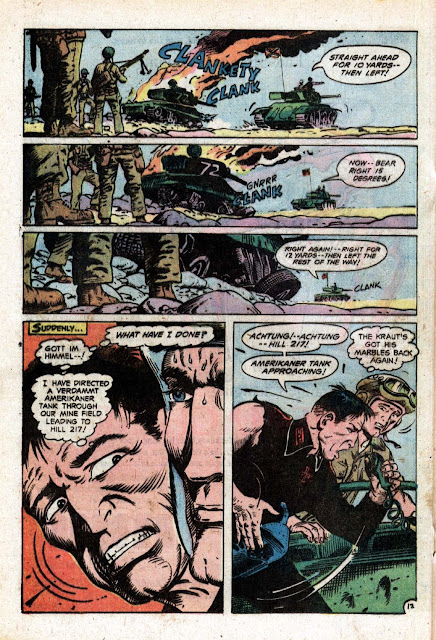 A Messerschmitt answers the call and begins strafing the Haunted Tank, but is brought down, thanks to the quick action of the crew's loader taking over for the wounded gunner.  After the short battle is over, the Haunted Tank is able to lead the rest of the assault force through the minefield to the German position. 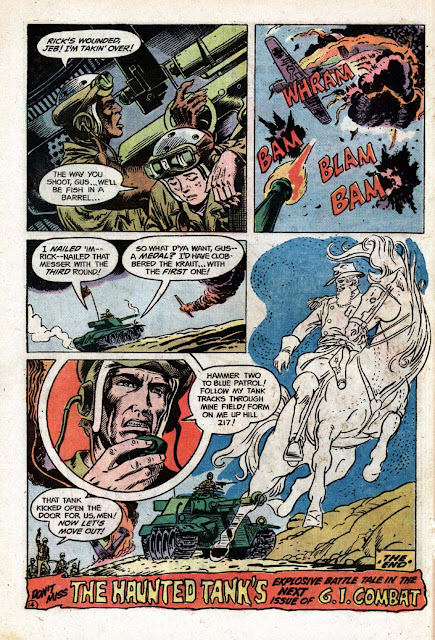 It's a pretty short, sweet, and simple story that SEEMS on the surface to just be a snapshot of one of the many small, strange things that happen in war.  Overall, it's not bad for what it is.

As I said in the introduction, the best war comics are anti-war comics in disguise, and this little story is no exception.  The REAL story is fairly well hidden to the casual reader, but this short piece is ACTUALLY about segregation of African-American troops during WWII.  The story begins with this short exchange just before the Haunted Tank is ambushed by the tank. . .

. . .and continues through the surface story, quietly in the background dialogue between explosions and attacks until the African-American loader (Gus) proves his worth by taking over for the wounded gunner (Rick) and downing the plane strafing the Haunted Tank.

The point being the injustice of racist policy during WWII that relegated African-American soldiers to support and labor roles when they were perfectly qualified to hold any position in the military (as history has now proven).

In other words, this little 14 page war story has a second, hidden story.  I REALLY liked discovering this a lot, and give proper credit due to Robert Kanigher for being able to pull it off without getting preachy or even giving a wink in the direction that it's there at all!

It's unfortunate that the great Joe Kubert didn't handle the art on this story. . .but the good news is that underrated comic legend Sam Glanzman was on the job here.

Glanzman isn't a name you often hear when people talk about the great comic artists, but in MY humble opinion. . .and NO opinion is more humble than mine. . .without Sam Glanzman and his gritty, realistic style, DC's war comics wouldn't hold anywhere near the enduring appeal they still enjoy.

From first to last, every page of this short story has at least one eye-catching moment, and that's something more than a few modern artists could take a lesson from.

Great art and two good stories for the price of one.

In the skies over Crete, pilot Bruno Krieg has proven himself a ruthless hunter, bringing down 4 planes in a short time and lacking only a fifth to reach the coveted title of Ace.  While on patrol, Krieg spots his target and moves in for the kill. . . 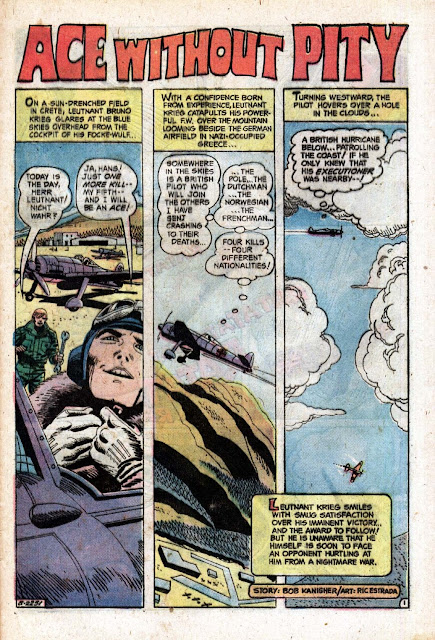 Krieg quickly pounces and the battle is short, but he is surprised when the English pilot signals for surrender and mercy.  Krieg smugly presses the attack even though the English plane is helpless, and destroys it.  In Krieg's mind, there is no room for mercy in war and he will not be denied his prize and the title of Ace. 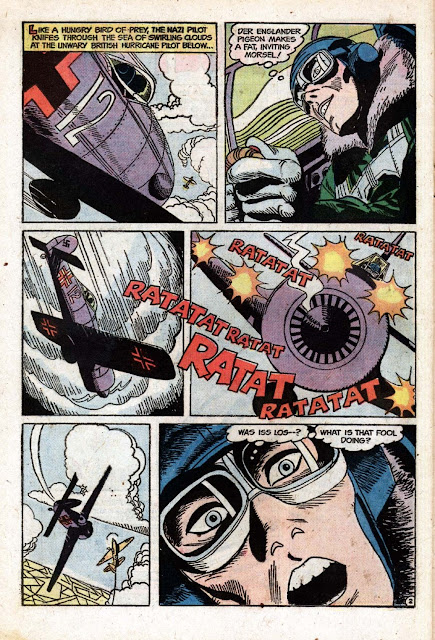 As the English pilot goes down, a freak accident causes the two planes to collide, forcing Krieg to bail out.  He begins to make his way along the beach to report back to base and claim his new title. 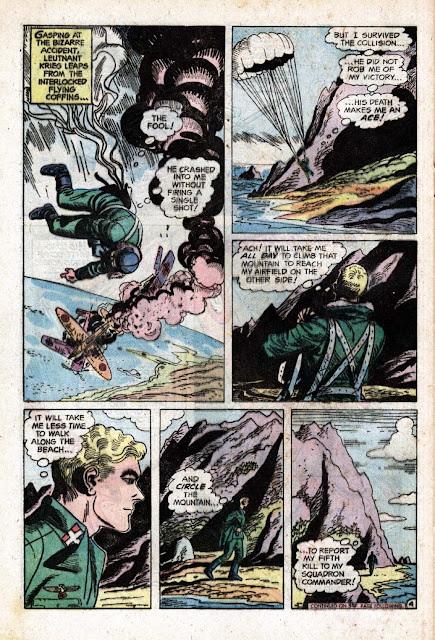 A short while later, Krieg decides to take a shortcut by swimming across a calm inlet.  Unfortunately, the inlet is home to a gigantic shark.  Krieg's pistol fails him, but the shark turns away. . . 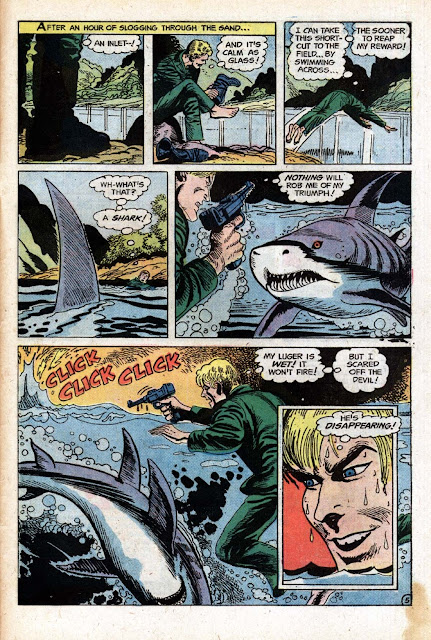 . . .Only to return and attack Krieg again, this time the shark hits his target chewing Kreig to pieces as the pilot screams for mercy from his uncaring killer.  And thus the tables are turned as one merciless killer falls prey to another even more so. 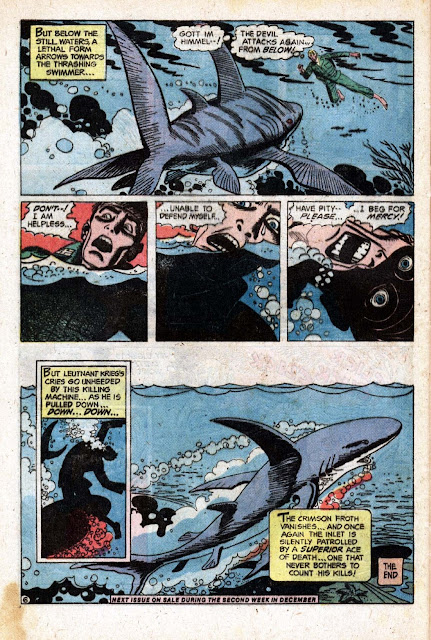 This little morality play seems like it would belong more in something like Weird War Tales, where this sort of story was the meat and potato mainstay of that title.  Unlike the opener, Kanigher doesn't try to hide anything in it.  It's just a straightforward condemnation of hubris.

It's well-written and moves at a snappy pace, but ultimately it's not anything that wasn't gone over again and again in Weird War Tales and other War comics (Not to mention Twilight Zone and other comics in that vein).  That said, it's not a bad story at all.  It's just sort of. . .been there, done that.

The art in this story is more bland and workmanlike than Glanzman's in the opener.  I digress a bit, but for some reason, in these older comics the artists always had trouble drawing sharks.  I know it sounds nitpicky, but once you see it, you can't un-see it.  I've seen bad sharks in so many Silver/Bronze age comics that it just seems strange that nobody else has ever mentioned it.

Putting my odd classic comic shark observations/obsession aside, the art on this story isn't BAD, it's just that when it comes to war comics, Sam Glanzman is sort of a hard act to follow.

Overall, this is a decent little "twist" story of the sort that's been done many a time, backed up by some pretty good art taken down a notch by ANOTHER bad Silver/Bronze Age shark.

There's a timeless nature to good war comics that make them one of my favorite genres.  G.I. Combat  #175 is no exception.  It's surprisingly readable and enjoyable for a comic book that's 44 years old.  There are a lot of superhero and horror comics from the Silver/Bronze Age that I find almost unreadable. . .they just don't age well.

This isn't the greatest comic I've ever read, but it's an extremely solid example of a good Bronze Age war comic.  The first story is packed with great art and has an interesting hidden story-within-a story.  The second entry is a pretty good "Twilight Zone Twist" story with a WWII backdrop.  Both of them sitting under a very nice Joe Kubert cover.  Really. . .what more could a comic fan ask for?

If you're havin' zombie problems he feels bad for you, son.
Rick's got 99 problems, but a zombie ain't one.