I'm gonna get this out right off the top. . .As far as I'm concerned, Batman: Legends of The Dark Knight is the best Batman series that has ever been published.

I'm sure there are many who will disagree with me.  But in MY extremely humble opinion (and NO opinion is more humble than mine), LOTDK (as I will be referring to it from here on out, due to basic laziness) was the ultimate perfection of Batman comics.

Please allow me to state my case. . .

What we have in LOTDK is a series that ran for almost TWENTY YEARS (1989 - 2007) for 227 issues (214 main issues, 7 annuals, 3 "specials" and a 3 issue mini), and the MOST expensive back issue of the whole shebang is about 8 - 10 bucks (Jeph Loeb & Tim Sale's fantastic LOTDK Halloween Special #1).  That alone is a Longbox Junk collectin' bonanza for bargain bin hunters such as myself.

Instead of following a straight continuity path (with the convolutions and retcons that a title spanning 20 years and over 200 issues with multiple writers would inevitably gather), LOTDK is basically a collection of mini-series of varying lengths and one-shots, with Batman stories being set at all points of his career. . .from Year One to the far future!  It DID occasionally tie into current continuity, but those were exceptions, rather than the rule.

By not tying LOTDK in to a straight continuity line with other Batman titles, the title was able to present stories from EVERY genre. . .from Science Fiction to Horror to Noir to straight-up superheroics.  Every story is pretty much a self-contained project.

You never know what's coming next!  Even if the story you're reading NOW isn't to your taste, the next one might be. . .unlike, say. . .A ONE HUNDRED ISSUE BATMAN TITLE WRITTEN BY THE SAME GUY AND GRINDING ALONG HIS CHOSEN PATH DESPITE A SPLIT FAN BASE (I'm looking right at YOU, Tom King).

Just take a look at SOME of the creative powers behind the stories and art of LOTDK. . .

Look at that list and know that there's MORE! I just got tired of writing them.  The sheer amount of comic talent on this series is unrivaled in ANY modern title, to my knowledge.  That list of writers and artists ALONE is a big reason to set LOTDK on top of the Batman heap, in my EXTREMELY humble opinion.

We have a Batman series that ran for almost 20 years, consisting of self-contained stories in multiple genres, set through the entire career of Batman, and with an unrivaled list of creators.  In other words, the all-around best Batman series ever created.  State your case in the comments if you disagree.

BUT ENOUGH ABOUT THAT!

LOTDK is one of my all-time favorite comic book series (in case you couldn't tell), but it wasn't ALL gold.  There are definitely a few turds floating down the river. . .as is to be expected from a series with so many different creative teams.  Don't get me wrong. For every , there are 3 gold nuggets. But there ARE turds in this great series.  Is this one of them?

BATMAN: LEGENDS OF THE DARK KNIGHT #175 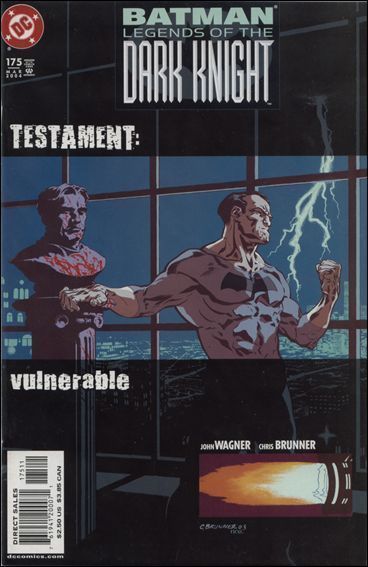 Hmmmmm. . .the cover on this one isn't really anything special.  It's the 4th part of a 5 part story, so no indication that this is any sort of "milestone" issue.  For some reason, even though this is a story that takes place very early in Batman's career, the cover makes him look like a grizzled old warrior with a receding hairline.  Definitely NOT the best cover LOTDK has to offer.  Let's get into the story. . .

We come into the story in progress at Wayne Manor, where Alfred (in a previous issue) has discovered that Bruce Wayne has been keeping a written journal of his activities as Batman.  Realizing the extreme danger the mere existence of such a document presents to Bruce, Alfred decides to burn the journal to protect him.  But as he does so, Wayne Manor is broken into by persons unknown. . . 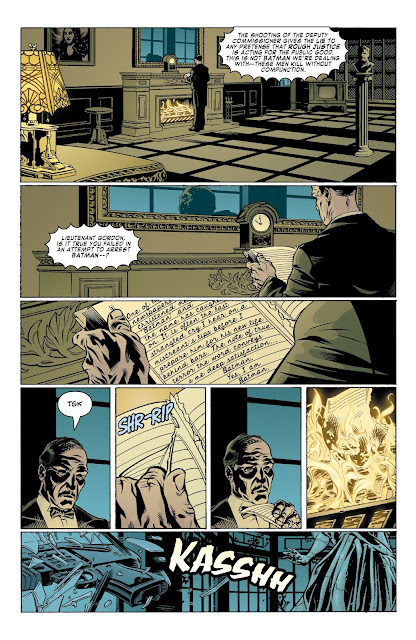 In the meantime, on the gritty streets of Gotham, Batman is pursuing leads on a new gang calling themselves "Rough Justice". They have recently arrived in Gotham and taken Batman's idea of vigilante justice to extremes as they blaze a trail of murder across HIS city.

Batman is disgusted by what is being done in the name of his "example" and is particularly brutal as he follows the trail of clues in order to quickly put them to a stop. . . 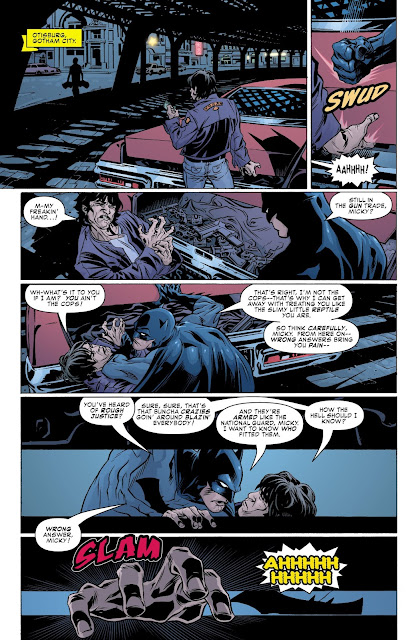 Meanwhile, at Wayne Manor, the gang that Batman is pursuing in Gotham are responsible for the break-in.  They ruthlessly beat Alfred until he is almost dead, then rob a safe.  As they are leaving, to Alfred's horror, they discover the journal Alfred was burning and realize that they've hit the mother lode. . .written proof of Batman's secret identity as Bruce Wayne! 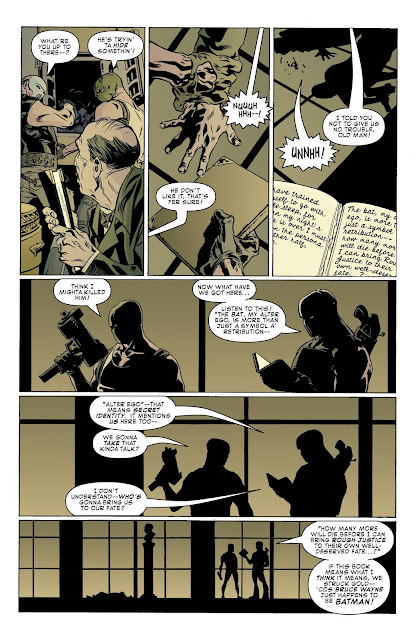 Later, Batman returns to Wayne Manor with enough information to discover the identities and location of the leaders of Rough Justice. . .but then discovers Alfred almost beaten to death and learns that Rough Justice is responsible. . .obviously, this isn't gonna end well for them. 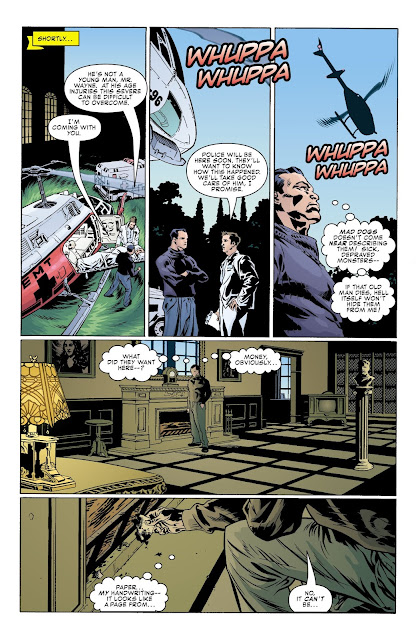 The scene shifts to G.C.P.D. Detective Ehrlich, who is also following clues leading to the whereabouts of the leaders of Rough Justice. . .but in a much less brutal and more procedural way than Batman on the same trail.  Ehrlich is concentrating on bringing in one Lonny Hector, a member of Rough Justice that is really a kid who is in over his head and was wounded in a recent police shootout. . .in other words, the weak link. 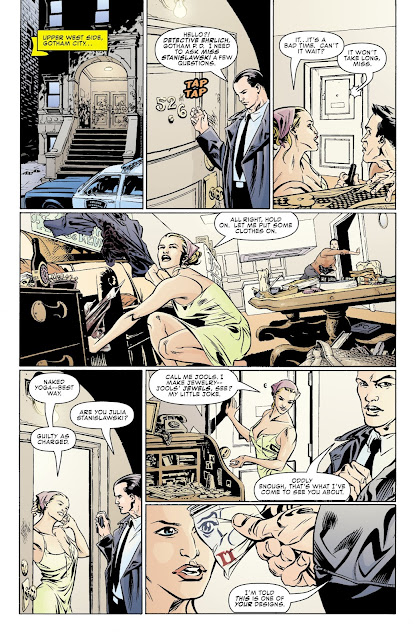 Lonny dodges Ehrlich while his girlfriend provides a distraction, but Lonny doesn't get far before other members of Rough Justice catch up to him, convinced that he's a rat.  They capture Lonny and take him to their hideout for some interrogation that he likely won't survive. . . 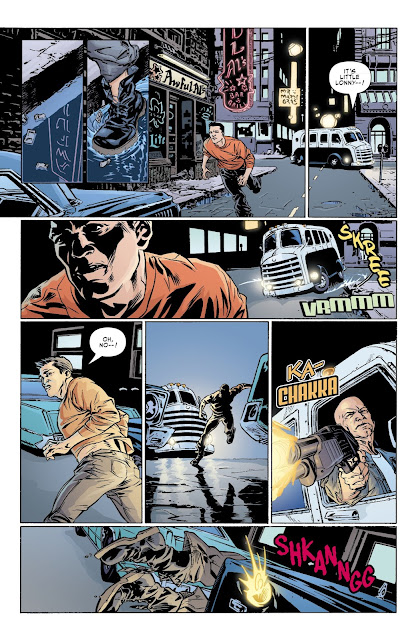 In the meantime, with Alfred safely in the hospital and in stable condition, Batman decides it's finally time to roll out on the fools who hurt his oldest friend.  Before he leaves, Bruce Wayne gets a call from the leader of Rough Justice, telling him that he knows Wayne's secret and that he wants money. . .lots of money.  Bruce agrees to the deal and Rough Justice's leader sets up a meeting place.

Batman heads out, more than ready to deliver some Rough Justice of his own. . . 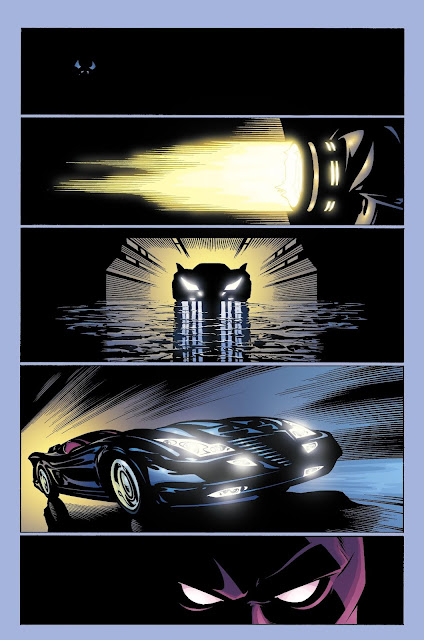 Okay. . .not bad.  Not bad at all.  John Wagner delivers a gritty story following the parallel paths of Batman and the G.C.P.D. on the same trail.  The gang they are both following seem pretty generic, but they serve the purpose of the story. . .which is to ask the question in Lt. Jim Gordon's mind of whether or not Batman's methods are even needed when good cops can still do good work in Gotham City (But that's in the NEXT issue, which I have.  I don't have any of the previous issues of this story).

I liked the hook of Batman still being inexperienced enough to be keeping a written journal when he's got a powerful and secure supercomputer he could be keeping records on.  I'm assuming that a reason for him wanting to hand write everything is given in previous issues.  The journal comes into even greater play in the next issue, where it comes into the hand of Gordon and it's left sort of ambiguous as to whether or not he reads any of it.  He implies to Batman that he didn't, but it's left up in the air.

The art in this issue was pretty good.  Not the best art I've ever seen, but nowhere near the worst.  It has a sort of European feel to it, like something one would find in Heavy Metal Magazine.  It matches the dark and gritty feel of the story quite well.  I DO have to point out that the page featuring Batman rolling out to meet Rough Justice has to be hands-down one of my favorite Batman pages I've seen in a LONG time!  That one single page (Right above these paragraphs, with the Batmobile) makes reading this comic worth it more than anything else.

That single page is a masterpiece of silent storytelling!  You just KNOW that someone has crossed over into the Dark Knight Danger Zone without a single word being said!  And that Batmobile. . .just LOOK at that Batmobile!

Even though this is the 4th part of a 5 part story and there's absolutely no indication that it's any sort of a "milestone" issue, Batman: Legends of The Dark Knight #175 is a great read.  It has a gritty detective-style story that makes me want to read all 5 issues (SPOILER: The final issue is great!), backed up by some pretty good art that features a shining example of silent storytelling at its finest.

Overall, this is the kind of great comic storytelling that has me convinced that Batman: Legends of The Dark Knight was the best ongoing Batman series that has ever been published.  It's not the best of the series, but  LOTDK #175 is definitely a fine little piece of Longbox Junk.