Not only that, but I've decided to present the LONGBOX JUNK #1 SPECIAL COLLECTOR EDITION with a selection of variants where I take a look at some comics in my (and my daughter's) collection that have hit that 175th issue milestone.

I was actually pretty surprised when I came up with this idea to spotlight a few issue #175 comics.  At first I thought I'd have enough to throw about 2 or 3 of them (MAYBE) into a single post.  But upon scouring both my and my daughter's collection, we discovered that between us we actually have NINE #175 issues. . .enough to go down the road a ways with this.

Over the next few weeks, I'll be presenting the LONGBOX JUNK #1 SPECIAL COLLECTOR EDITION with variants spotlighting the following #175 issues:

Batman: Legends of The Dark Knight

The Brave and The Bold

A pretty good mix, if you ask me!

Instead of my usual Longbox Junk reviews, where I look at full mini's or series from front to back, the LONGBOX JUNK #1 SPECIAL COLLECTOR EDITION variants will just focus on one single #175 issue taken completely out of context and we'll see what happens.  In other words, more like my "Retro Reviews". Okay then. . .ready? 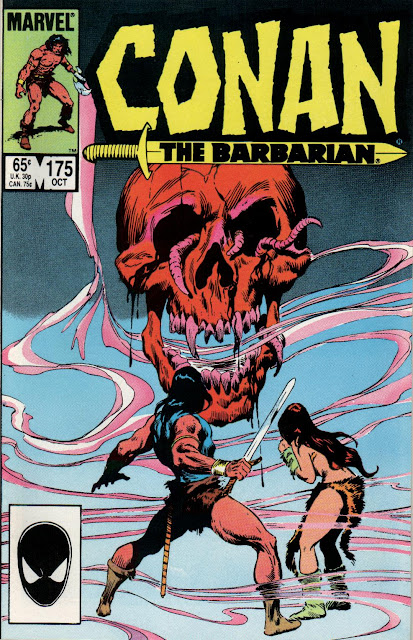 Just LOOK at that cover! What a great first variant for the LONGBOX JUNK #1 SPECIAL COLLECTOR EDITION!  The Late, great John Buscema starts us off right with a cover that embodies everything great about Conan The Barbarian!  It's got a looming, supernatural enemy. It's got the titular Conan wary, but more than ready to jump into action. It's got a scantily-clad damsel in distress.  This cover IS Conan! It's stuff like this that made John Buscema a comic legend.

As Conan and his mercenary companions, Delmurio and Tetra, journey toward Argus through the thick of the Zingaran Civil War, they get tired of having to constantly fight off bandits on the road.  They decide to detour to the nearby fishing village of Cascan in order to try and rent a boat and travel by river instead. . . 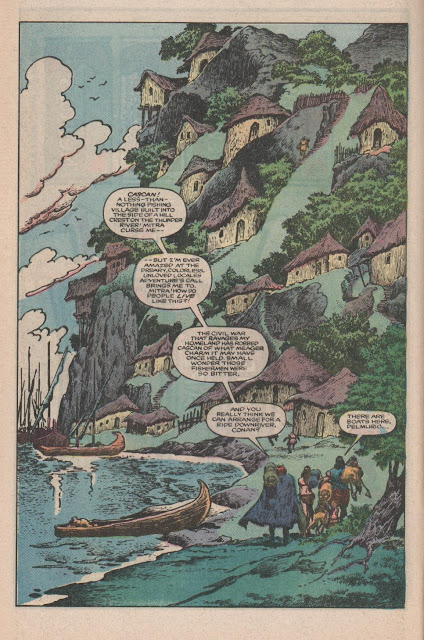 Unfortunately, the mercenaries have problems securing a boat.  It seems that because of the civil war, boats leaving Cascan have been attacked and many people have simply disappeared travelling on the river.  Conan isn't one to take "no" for an answer, but luckily before things turn TOO for the villagers, an old blind man appears and offers Conan and company his services and boat. . . 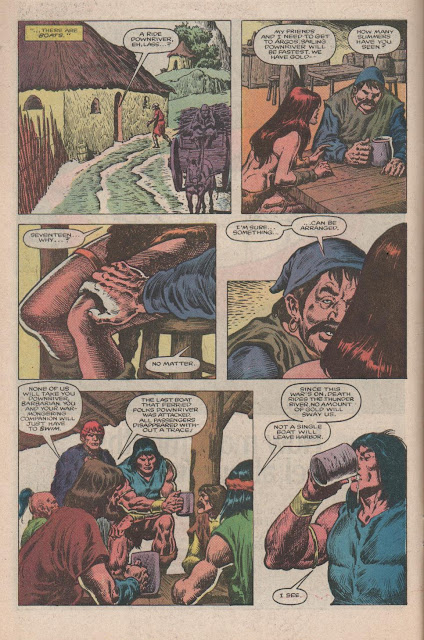 It isn't long before the river voyage takes a turn for the strange. After entering a mysterious fog bank and sailing through a gigantic stone portal, Conan finds himself alone and on land among snow-capped mountains with neither the river or his companions in sight. . . 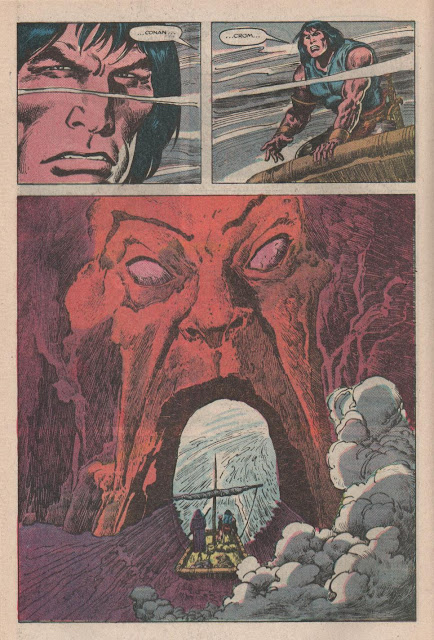 A group of strangers come upon Conan as he tries to get his bearings, it turns out that they are the people who have disappeared on the river, and they are trapped there after being defeated by a warrior they call "The Scarlet Personage".

They try to get Conan to hide out with them, but Conan decides that if he's going to die, it's going to be with a sword in his hand. . .and so while the doomed people try to find a place to hide, Conan calls the Scarlet Personage out for battle. . .and it isn't long before he shows up! 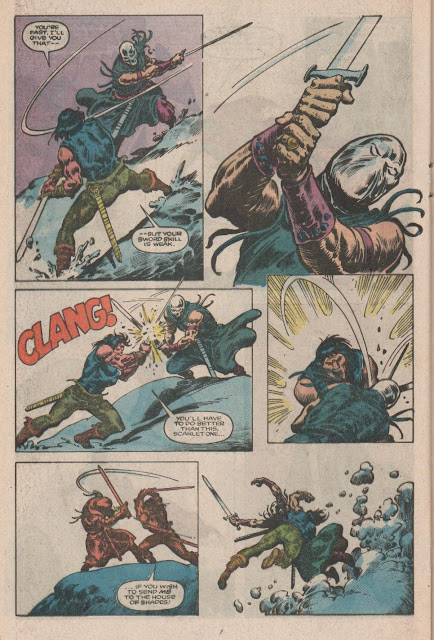 Conan quickly engages the mysterious warrior, and does quite well at first, but eventually he is overpowered and on the verge of death.  As the warrior strangles Conan, the Barbarian is determined to stare his death in the face and rips off his mask, revealing a horrific scarlet skull crawling with worms.

Where a lesser man might go insane from staring into the face of the supernatural, this isn't Conan's first rodeo.  He spits right in the creature's eye and shows no fear of death.  It turns out that the creature feeds on fear, and Conan's lack of it weakens it greatly.  The "Scarlet Personage" flees the battle. . . 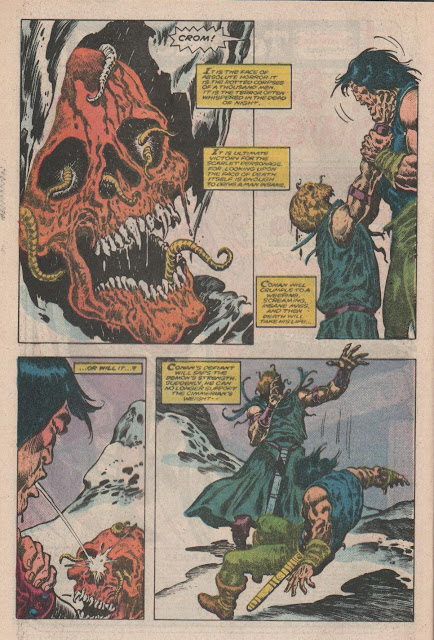 The creature greatly underestimates Conan, assuming that the Barbarian will count himself lucky to be alive and find a place to hide.  Instead, Conan pursues the weakened creature to his own hiding place and easily defeats him, then uses  a ring that falls from the creature's finger to return to his own world. . . 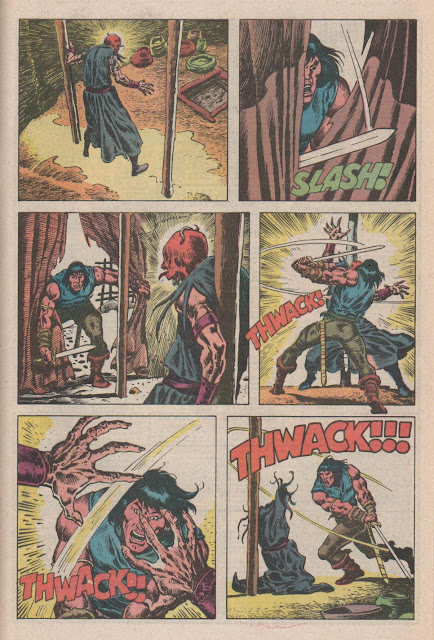 Back on board the boat, Conan tears the rags from the blind man's face and reveals him to be the same Scarlet-Skulled monstrosity. . .luring hapless travelers to their doom in order to feed off their fear. . . 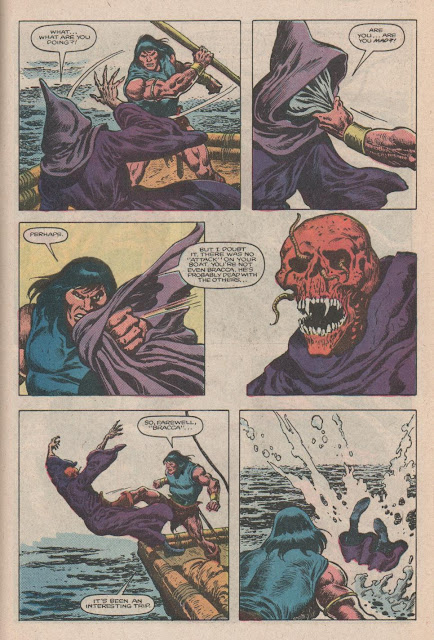 Conan dumps the creature into the water and a strange storm brews, FINALLY waking his companions up. . . 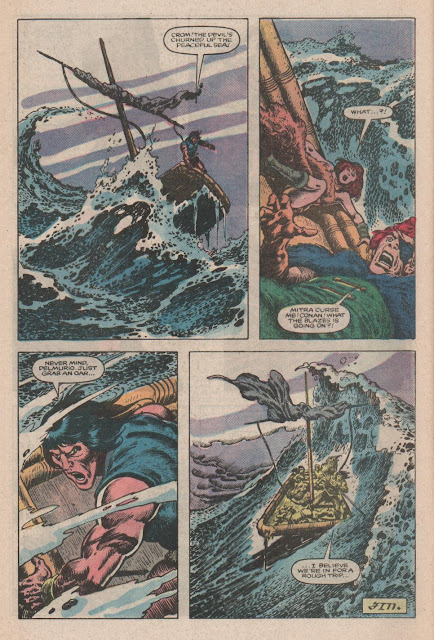 And so this story comes to an end, but with the river raging around them, Conan can tell that their strange journey has just begun. . .

I have to say that I really liked this story a lot.  It's basically a complete story in one issue with JUST enough connection to past and next issues to make it part of an ongoing saga.  It doesn't make the most sense when you look at it closely, but the questions that I ask about this comic are easily answered with, "It's CONAN, kid.  Just read the comic and quit askin' so many questions!"

This isn't MEANT to be great literature.  It's a short chapter in the journey of a mythical Barbarian through a land of magic and mystery.  It has everything that makes a great Conan story served up in one issue. . .swordfights, gritty dialogue, magic, creatures, and mysterious peril.

For what it is, it delivers everything a Conan fan could want in one single issue.  If you aren't a Conan fan, it's not going to change your mind one bit.  This is a story written for an existing audience that makes no attempt to appeal to those who don't get it.

The story is backed up by more great Buscema art. . .maybe not as great as that iconic cover, but still pretty good.  There are a few places where Buscema's art really shines through. . .the first view of the fishing village, Conan's boat rushing through the mysterious portal, the fight with the "Scarlet Personage", the final panel with the storm raging around Conan's boat.   The art really complements the story quite well through the whole issue.

Overall, this is a great issue of Conan The Barbarian!  It has a story that delivers what Conan fans expect, backed up by great art.  It doesn't acknowledge at all that it's a "Milestone" issue, but that doesn't take anything away from this comic being a very nice little piece of Longbox Junk that's worth a read if you spot it in the bargain bin.

Variant B - Batman: Legends of The Dark Knight