Generally speaking, comic book fandom seems to cross over with certain other fandoms pretty easily and often.   Video games is one of those crossover points with comic books that is a great example of how two seemingly different things can come together in a great way. . .well, mostly great anyway.

Like just about everything else on Earth, there's good AND bad to be found in the many comic book/video game crossovers out there. . .which brings us to this Longbox Junk entry.

This time out, I'm gonna TRIPLE down on things I love with not only comic books and video games, but ALSO my great love of the one shot!  I know that there are a lot of people out there who prefer the history, background, and ever-changing storylines of an ongoing series. . .especially one that's been rolling along for a while.  There's nothing wrong with that.

I've personally always had a lot of admiration for a finely-crafted one shot, where the creative team is tasked with telling a complete story in ONE single issue.  It's not easy to pull off.  There's a LOT of just plain awful one shots out there, but when a team hits it perfectly right, it can go beyond good and straight into brilliant.

Can the various teams on these one shots manage to pull off the difficult task of not only providing a good story in limited space, but ALSO maintaining the spirit and flavor of something based in an entirely different media?

I'll even throw in some reviews of the games while I'm at it. 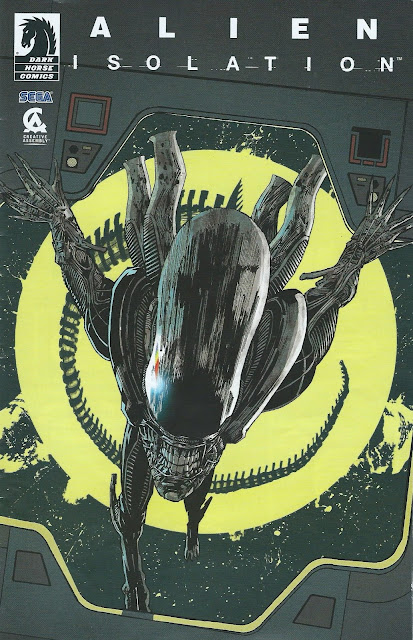 If you're looking for a game that REALLY captures the desperate and tense flavor of the original Alien movie without the Space Marine gunplay that the rest of the Alien franchise games concentrate on, then Isolation is the only way to go.  I can highly recommend Isolation as a pretty unique gaming experience. . .but that's the game.  Here's the prequel comic.

There's 3 loosely-connected stories and a framing prologue/epilogue.  The first story follows the Marshal of Sevastopol Station and his rapidly dwindling security force as they try to hunt down the alien creature wreaking havoc on the station, eventually leaving the Marshal as the only survivor.  The second story follows another survivor of the alien attack as he desperately does whatever is necessary to stay alive, even if it means abandoning others to die so he can live.  The third story takes place in the mind of a man suffering horrific nightmares, only to be revealed that he is an unconscious patient in the base infirmary after an accident being infected by the alien parasite.

As a prequel to the game, this comic doesn't really contribute much at all to the story beyond a bit of background, and it even contradicts it in a few places (there's no alien hive in the infirmary in the game, for example).  But as an Alien comic, it completely succeeds.  The four parts of this comic are like little snapshots of the horror of an alien infestation.  They don't tell a complete story, but that's part of what makes it good, and what they DO show is really well done. . .including the gritty, dark art.  The art here REALLY helps sell the desperate little vignettes more than anything else. 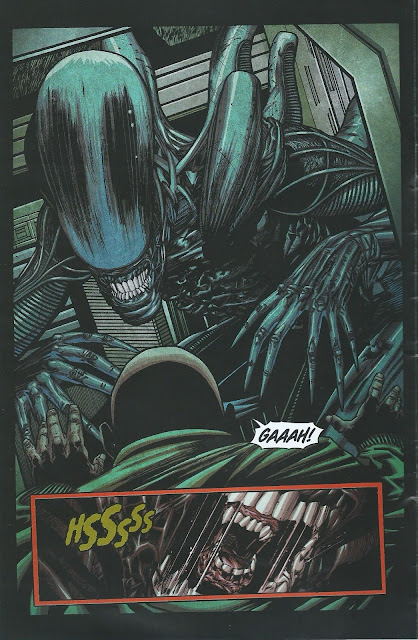 Overall, I really like this comic a lot.  Unfortunately, you might have a hard time finding it.  I got this randomly mixed in as part of an auction lot a couple of years ago, but came to discover it was only available in 2014 in limited numbers at 3 comic conventions and it looks to be a bit pricey to get a copy of now (Prices online look to be between $35 - $150).  So this one isn't REALLY Longbox Junk. . .but I thought that if any fans of Alien: Isolation were reading this, they might be interested to know that it exists. 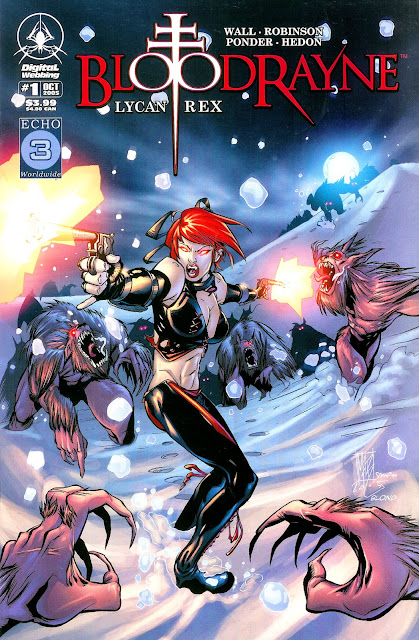 BloodRayne as a video game is one of those things that sound better on paper than what they turned out to be.  It involves a half-vampire member of a secret society protecting the world from supernatural forces and killing Nazis.  Sounds great, right?

Unfortunately, the controls were , the graphics were bad even for their time (early 2000's) and it was all so utterly average that it's just the kind of game that if you were to play it now, you'd probably give it about 30 minutes at most before you realized that nostalgia for early Playstation games only goes so far.  BloodRayne as a video game is a perfect example of wasted potential.

That POTENTIAL of a sexy half-vampire fighting supernatural creatures as part of a secret society has managed to extend the shelf life of the concept to two sequel games (both worse than the original), THREE movies (all directed by Uwe Boll, two of them straight to video. . .need I say more?), and a pretty fair string of about 15 comic book mini-series and one shots. . .including this one.  Let's take a look!

After the Brimstone Society kills the werewolf son of one of their loyal members, he vows revenge and disappears.  Twenty years later, he resurfaces as the leader of a werewolf army ravaging rural Russia and BloodRayne is sent to put a stop to it.  She succeeds, but in the process she learns that sometimes the people she works for create monsters just as well as they destroy them. . .

I have to say that I'm pleasantly surprised to find myself really liking this comic.  I came in with some REALLY low expectations, based on the games I played and the single movie I've seen.  I thought this was just going to be a scantilly-clad Vampirella copy aimed directly at the crotch of teenage boys.  What I got was a good Vampire vs. Werewolf story with lots of action that is actually pretty well written and is backed up with some awesome art! 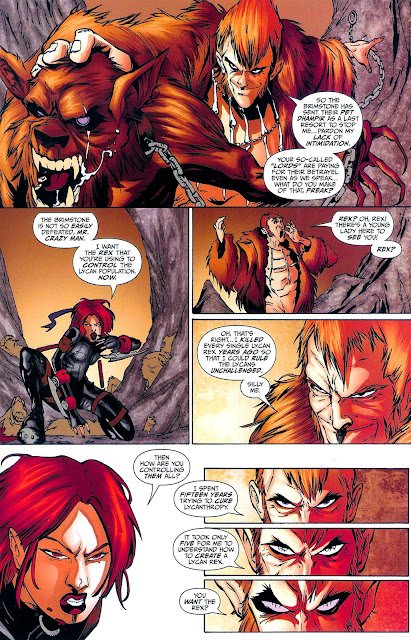 Overall, this was a nice surprise.  If a new BloodRayne game could only capture the action and adventure of this comic, I'd definitely be on board.  As for the comics, this one shot makes me want to keep my eye out for more in this series.  It's a great little piece of Longbox Junk. 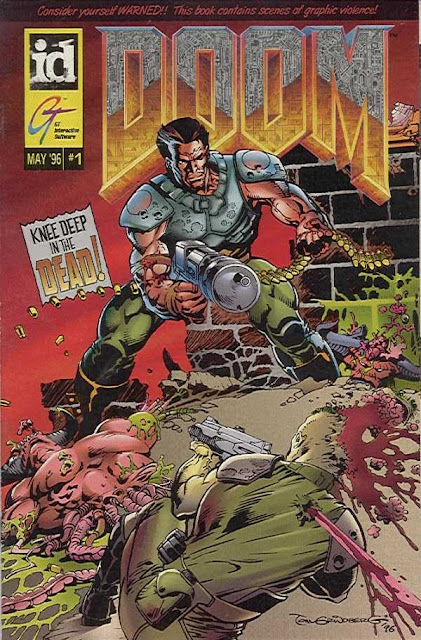 Doom.  The granddaddy of ultra-violent first-person shooter games.  Doom has a legacy in video gaming that can't be ignored.  That said, even when it was THE game, I was never a fan of the simplistic graphics, repetitive gameplay, and non-existent story.

Later versions (especially the reboot of the series that came out in 2016) made a lot of improvements on the original, skeletal framework of a game that started the franchise, but the original Doom (which this comic is based on) is basically mindless violence for violence's sake and nothing more than that.

A Marine blasts his way through a horde of invading demons in a blood-soaked quest for bigger guns.  The End.

Yep.  The comic is about the same as the game. . .but better!  In fully embracing the ridiculously violent nature of the game, this comic book elevates itself straight up into the "so bad it's good" realm inhabited by movies like "The Room".

Every single page of the Marine's running monologue as he increases his firepower makes this comic book one of the funniest things I've ever read.  The writing is so awful, yet at the same time, awesome!  The art is pretty bad, but in such an exaggerated 90's-tastic sort of way that it perfectly compliments the terrible story. 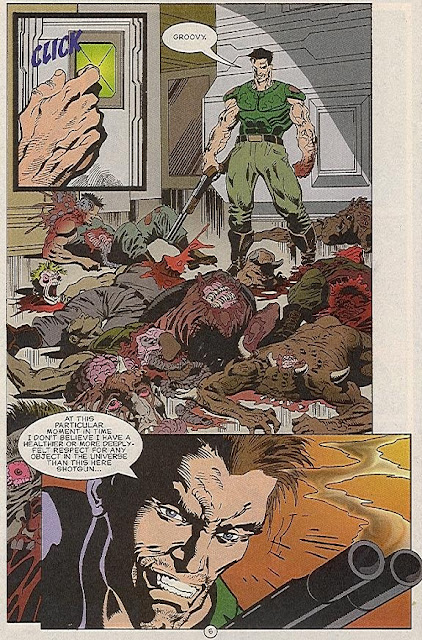 Overall, this is the sort of comic that shouldn't even exist.  But at the same time, it MUST be read!  I both heartily condemn AND recommend it.  It's so bad, it's good!  I love it! 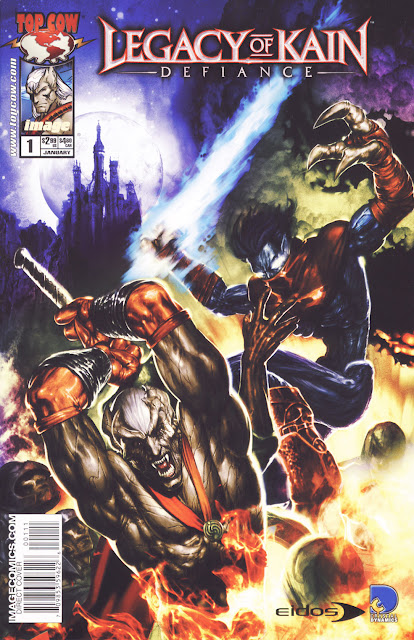 Legacy of Kain: Defiance was the 5th entry in a series of late 90's/early 2000's games following the convoluted stories of Kain (the last vampire lord) and his former lieutenant, Raziel.  I'm not even going to try and describe the story, it's THAT huge and tangled.  It mostly involves themes of struggling against fate that seems to be pre-destined.

Let's just say this. . .if you bought any of the later games without playing the earlier ones, you pretty much wasted your money because you would have no idea what the heck was going on, storywise.

Beyond the story, the games at heart were basically third person action puzzle games, where you used the various abilities of the main characters to solve puzzles and defeat enemies in order to move forward to the next dramatic cutscene.

They were all pretty highly-regarded, but personally I liked the "Soul Reaver" games in the series featuring Raziel more.  The games featuring Kain were much more combat-oriented, while Raziel had a lot more interesting abilities and puzzle solving. . .plus Raziel just LOOKED awesome!

Legacy of Kain: Defiance was the last game in the series, and combined the two storylines. . .allowing you to play both Kain and Raziel in the same game for the first time.  The story in the game was almost incomprehensible, the game camera was just plain bad, and the combat was partly broken due to that bad camera and trying to fit abilities of two separate characters into one control system.

The PS2 and original XBox just weren't capable of pulling off what the developers wanted to do with having two completely different playable characters, so the game feels unfinished and very repetitive.  All that AND the story ends on a cliffhanger that was never resolved because Defiance didn't do as well as the rest of the games in the series, so the planned follow-up never came to be.

So that's the game.  How about the prequel comic book?

As the Vampire Lord Kain mercilessly slaughters a band of Sarafan Order vampire hunters, he muses on the triumphs and defeats of the past, as well as his plans for the future of the realm of Nosgoth.

What we basically have here in this one-shot isn't so much a standalone story, or even a prequel to the title game.  What we have here is exactly what is in the description above. . .Kain fighting some vampire hunters while he gives the reader an internal monologue exposition dump recapping the story of the Legacy of Kain/Soul Reaver game series up to that point.

It's well-written, but basically it's a bunch of caption boxes relating previous events that aren't going to make much sense to anyone that isn't already a fan of the game series.  Worse, it commits what I think is the worst sin a one-shot can. . .it ends on a "to be continued".

The saving grace here is the art.  Over half of the comic is done in gloriously detailed double page spreads showing scenes from the story of the video games in a fantastic collage style.  I'd love this page of Raziel (without the exposition dump thought boxes) as the background on my computer! 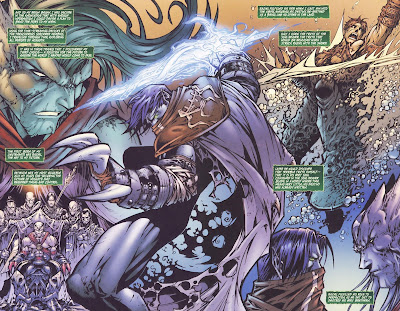 Overall, I found this comic disappointing.  It's less of a story and more of a pre-wikipedia tool to be used as a refresher to wade through the convoluted background of the Legacy of Kain/Soul Reaver games before playing the final game.  The art is utterly fantastic in many places, and is really the only reason anyone beside a super-fan of the game series would ever want to pick this comic up.

Be there of be square!