Let's start the New Year off right with a Retro Review for the first 2019 Longbox Junk post!

If you're new to Longbox Junk (Welcome, and thanks for reading!) "Retro Reviews" are sorta special editions that show up every now and then where I take a look at some of the more "collectible" comics I own instead of my usual dollar box fare.

They're still comic book reviews NOBODY ever asked for. . .the comics are just worth a few more dollars, is all.

This time out, we take a trip back to 1967 and release Marvel's original version of Ghost Rider from its plastic prison.  I bought this book several years ago (like many older comics I own) for the cover alone.  In my office at work, I have a wall with a rotating collection of a dozen comic covers framed up on it.

Not only are they great conversation starters, but who the wants some sappy inspirational quote poster when there's Ghost Rider, Batman, Captain America and The Fantastic Four? Am I right?

But like I said, I buy many of these older comics for the covers and never really get around to reading them.  This is one of those comics.  So let's do this!

ORIGIN OF THE GHOST RIDER 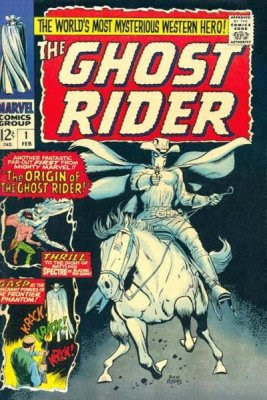 One of the things I like about these retro reviews is that I get the chance to learn a little bit more about the background and history of comic books in general with each one I do.

So, as usual, bear with me for a paragraph or three so I can share what I learned this time out. . .so maybe someone else might learn a little bit they don't know too.

Magazine Enterprises was one of the companies that folded under Comic Code Authority restrictions and the character fell into the public domain.  Marvel Comics basically swiped the character design and brought in one of the original creators, Ayers, to revamp Ghost Rider as their own character.

The second thing I learned is that the inker on this book (Vince Colletta) is a bit of a controversial figure in comics history.  On a reading of this comic, I can sort of see why.  Normally, I like Ayer's artwork.  It's really good for the time.  I mean, just LOOK at that cover above! What's not to like?  But as I looked through the interiors, the art isn't that great at all (more on that later).

On further research into the creators, I learned that Colletta was known as an incredibly fast inker who also took lots of liberties with the pencils, erasing figures and lines to make the job go by faster. . .and BOY does it show here!

Enough of that.  Let's get into this comic book and see what it's all about.

Starting off with that AWESOME cover. . .the thing I bought this comic for in the first place!  The black and white figure, that excellent character design, the bright reds and yellows to make things pop and really catch the eye, the bombastic teaser text.

It all comes together and screams that this is a comic book you MUST buy!  If I saw this thing on a spinner rack next to a bunch of superheroes, it would be comin' home with me.  That cover is a real eye catcher.

Underneath the cover, there's two stories.  The main feature "The Origin of The Ghost Rider" and a 6 pager called "The Menace of The Mask Maker", which is reprinted from Kid Colt Outlaw #105 (1962).

Carter Slade is a school teacher on his way out west looking for a bit of that frontier action everyone was getting into during the post (civil) war years.  He sees a ranch being attacked by a group of Indians.  When he jumps in to try to help the ranchers, he realizes that the Indians are actually white men in disguise.

Slade is shot and left for dead by the fake Indians. Shortly afterward, the mortally wounded schoolteacher is found by a young boy named Jamie Jacobs . . .the only survivor of the ranch attack.  The boy manages to get Slade on his horse and they ride for help.

Eventually, they stumble across a band of Sioux, who take the dying Slade to their Medicine Man, Flaming Star.  Slade's wounds are mysteriously and suddenly healed, and an amazed Flaming Star tells Slade of the prophecy delivered to him by his Gods.

Flaming Star leads Slade and Jacobs to a wild white horse that seemingly can't be tamed by any brave of the tribe.  Slade easily tames the stallion using. . .er. . .his awesome polo skills. . .and names his new horse Banshee.  Slade and Jamie leave the Sioux, and after making camp that night, Slade offers to raise the boy himself rather than send him off to an orphanage.  He then uses the glowing dust given to him by Flaming Star to fashion an awesome costume and creates for himself the identity of "The Ghost Rider".

The next day, the fake Indians have gathered at the ranch of their employer, Jason Bartholomew, who wants to chase off all of the settlers who have decided to make their homes on his land. . .which is actually pretty justifiable when you think of it, even if the methods are a bit shady. . .BUT I DIGRESS!

He orders his men, led by his foreman Blackie Clay, to burn down the schoolhouse in the nearby settlement of Bison's Bend. . .but his men are all idiots and the townspeople see through their crappy Indian disguises.  To make their escape, Clay kidnaps a woman named Natalie as hostage.  Shortly afterward, Slade and Jamie ride into town and are told the news. . .prompting Carter to try out his new hero identity  by riding out to rescue Natalie.

That night,  Bartholomew is rightly chewing out his men for being utter idiots by not only letting the settlers see through their disguises, but by also taking a woman hostage and bringing her right there to his ranch.  In the middle of Bartholomew's motivational rant, the lights go out and The Ghost Rider appears, glowing in the darkness and seemingly impervious to their gunshots.

Slade makes quick work of the men that decide to stay and fight instead of running like scared little girls, then scares the holy living out of Bartholomew to the point that he runs off on foot to turn himself in to the Marshall.  While this is all going on, Natalie frees herself and escapes back to town, unaware of the supernatural shenanigans that helped her get away by distracting her guards.

The next day, Slade plays the tenderfoot schoolteacher while the town is a-buzz about the strange goings-on the night before.  Oddly enough, even though he was RIGHT THERE when Slade was creating his awesome glowing Ghost Rider costume, Jamie Jacobs is like, "Gosh, WHO could've scared them that bad? Musta been a heck of a gunfighter!" To which Slade gives a hearty laugh and tells Jamie he's got no idea who it might have been either.  Then they decide that Buffalo Bend might be a decent place to settle down for a nice peaceful life of schoolteachin'.

First off, I realize that this is a Silver Age comic book, and comic books at that time were written for an entirely different audience than comics are written for now. Because of that, I also need to look at things through a lens of the time it was written, because I'm going to say that for someone like me reading this for the first time in the year 2018 it doesn't come off well at all.

Honestly speaking from a modern point of view, the characters are cardboard and the scripting is pretty awful.  The art isn't great and the coloring is slapdash and sloppy in places.  The look and feel of this comic overall is that of something that was rushed.

Ayer's art SHOULD have been the saving grace on this comic, unfortunately (as I mentioned above) Vince Colletta's inks suck the life right out of the artwork.

Generally speaking, Ayers was an amazing artist for the time, and his design for The Ghost Rider is absolutely fantastic, but having Colletta finish his pencils damages Ayer's work to the point that it basically looks like . . .and that's a crying shame.  To make matters worse, the coloring is pretty sloppy through the whole comic. 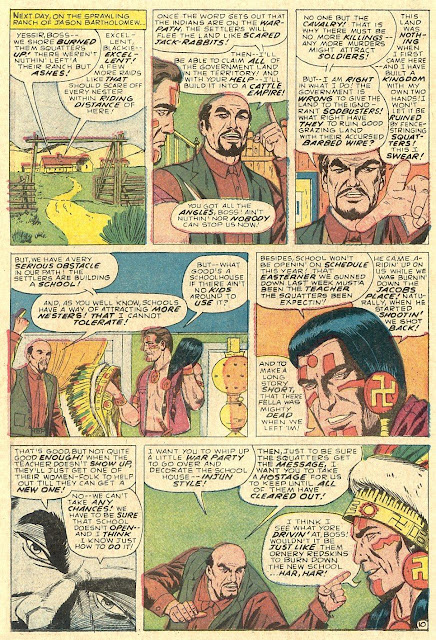 For the time it was written, was this a good comic or not? I'd say that kids probably thought this was a pretty good comic back in 1967.  Westerns were still big on T.V. and at the movies at the time and as far as I know, the concept of a supernatural-themed western superhero wasn't something you could see on the screen.

Beyond the supernatural angle, the story is juvenile and pretty racist to modern eyes, but to the audience this comic was written for, I don't really think that was an issue at all.   The art is borderline , but I don't think kids in 1967 gave a flying frig WHO the inker was as long as there was a comic book with a glowing ghost cowboy in it.

As a huge fan of western comics, I REALLY wanted to like this. Unfortunately, there's not much here to like for a modern reader beyond Ayer's fantastic design of The Ghost Rider character itself.  The story was laughable, the art was pretty bad, and overall this comic just seems rushed.

To the readers it was intended for in 1967, it was probably pretty good, but unless you're a diehard fan of western or Silver Age comics, I'd say the cover is the best part of this.  As part of comics history and as a collector's item The Ghost Rider certainly has a place, but otherwise it's just not very good.

Back to Longbox Junk business as usual with the second half of All-New Guardians of The Galaxy.