Welcome back to Longbox Junk for some more Halloween comic fun!

So far through this month, I've posted about DC Superheroes in sort of Halloweeny situations. . .A comic book sequel to The Fly II. . .Lovecraftian Sea Creatures. . .Twilight Zone-ish tales from the 1960's. . .Alien Vampire . . .and DC Elseworlds Horror.  A pretty interesting mix, in my extremely humble opinion.

There seems to be SOMETHING missing.  I see a sort of big hole in my Longbox Junk Halloween that needs to be filled with classic monsters. . .I'm talking about some old school Dracula and  Wolfman.  Let's do it! 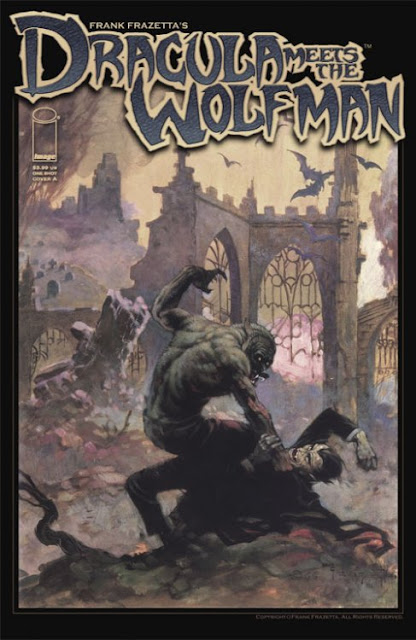 There was a time when Image Comics partnered up with Frank Frazetta and they put out a line of one-shots (and a couple of mini-series) where they took a classic Frazetta painting and built a story around it.  It's actually a pretty sweet idea.   I'm not sure of the sales numbers, but I'd venture a guess that Death Dealer was probably the most popular, since they ran 6 issues from it.

The cover. . .I've never seen this particular painting before, and to tell the truth, it doesn't look like one of Frazetta's best. . .but in my book, even so-so Frazetta is still better than most.  It's good enough to hang on my office wall, so there's that.  Let's get inside and see what's happening.

Here's how the story goes:

Moldavia. . .1849.  In a small village, a young man named Nicolae and a beautiful young woman named Marta are in love.  Unfortunately, it's a doomed love that can only be from afar because Nicolae happens to be cursed as a werewolf, and it's too dangerous for them to actually be together.

The good thing is that the villagers seem to be okay with Nicolae's curse.  Everyone knows about it and instead of hunting him down and burning him at the stake, as one usually does with the werewolves, they simply trap Nicolae when he changes and hold him captive until the full moon passes and then they release him and village life returns to normal for the rest of the month. 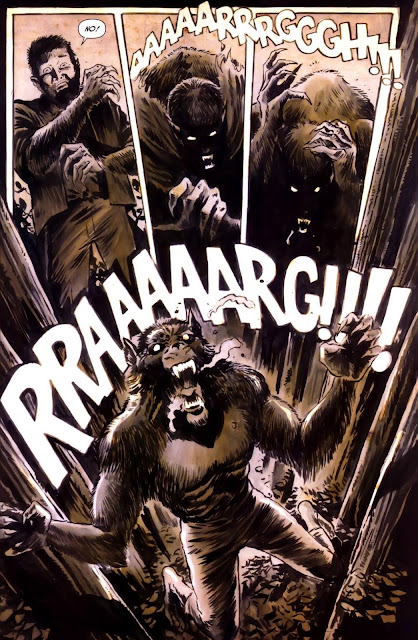 On this particular full moon the story takes place during, Marta has been invited to dine with a passing nobleman.  The whole situation (and the old castle he's staying at for the night) is a bit creepy to Marta, who was sort of forced into it against her will, but the nobleman assures her that he only wants some feminine company. . .AND HER BLOOD!  Yep, it seems that Marta has the bad luck to be having dinner with the one and only Count Dracula. 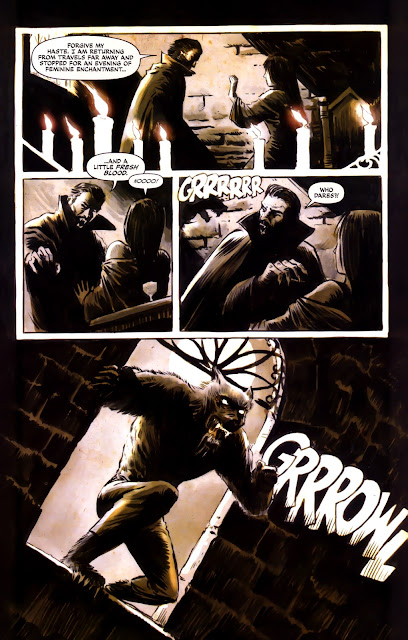 It's a good thing that Nicolae's family witnessed the sketchy nobleman heading toward the old castle with Marta and decided to release Nicolae, who shows up just in time to interrupt Dracula's dinnertime. . .and he is NOT happy with what he sees. 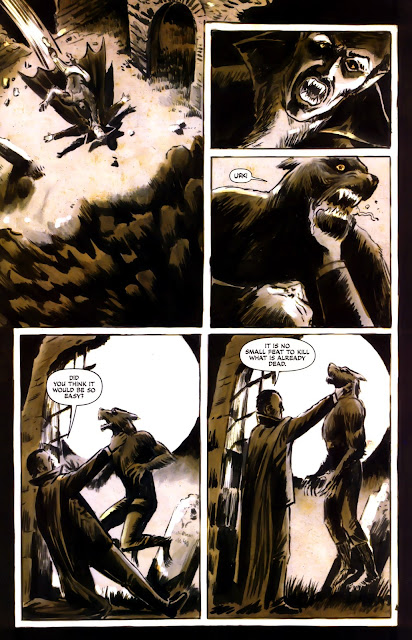 An epic battle ensues between Nicolae and Dracula.  When Marta sees Dracula getting the upper hand on her love, she jumps in and stabs the vampire in the back, but Dracula swats her away and she falls onto a sharp piece of the room's wreckage and is impaled.  Nicolae is distracted enough by Marta's death that Dracula is able to kick him over a cliff. . .resisting the urge to shout, "THIS IS SPARTA!"  and Nicolae the Wolfman falls to his death. 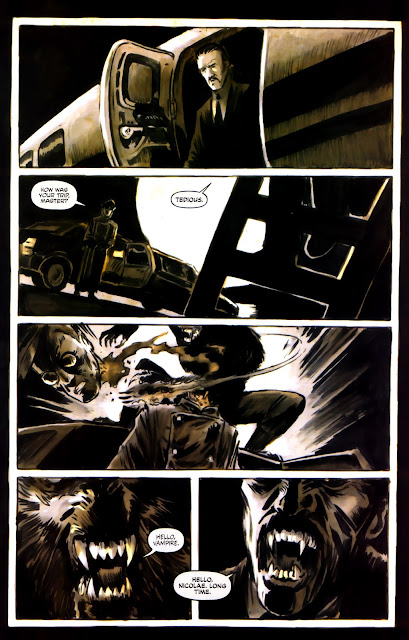 We skip forward about 150 years or so to modern times and get an epilogue where Nicolae confronts Dracula at an airport and the two resume what appears to be a battle that has been going strong since that fateful night they first met. 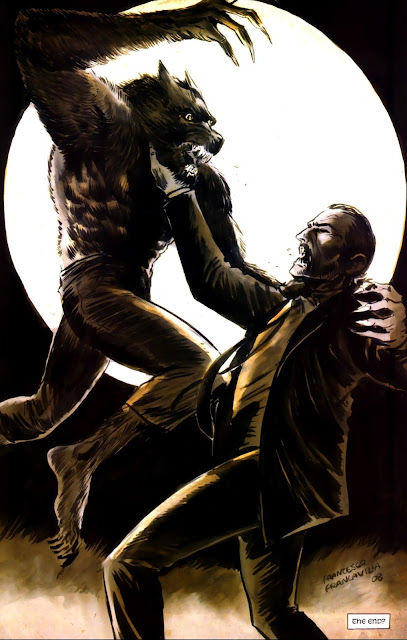 Okay.  Not bad.  Short and sweet, and to the point.

The Comic is called "Dracula Meets The Wolfman" and that's pretty much what happens.  The story is extremely slim, but well-written.  The ending sort of leaves you hanging like a denied high-five,  making this feel like it SHOULD have been the first issue of a mini, but even so this is a pretty fun read.

I'm sort of half and half on the art.  Francesco Francavilla is one of my all-time favorite comic artists.  Normally, it's my opinion that he can do no wrong.

This is not some of his best work.  It seems rushed and even unfinished in many places.  It's a lot rougher and more sketchy than what I would expect from Francavilla.

Francavilla's trademark cinematic style IS present, and there are some really good panels scattered throughout. . .but between the sketchy lines and the odd choice of sepia tone through the whole thing (maybe trying to evoke the look of old movies?), what this really reminds me of are animated movie storyboards. . .almost like something not completely finished.  Being a fan of Francavilla, it's just sort of strange.

On the one hand, you have an extremely fast-paced story centered around an epic battle between two classic creatures, illustrated in cinematic style by one of the best artists in the business (in my EXTREMELY humble opinion).

On the other hand, you have a story that ends too quickly and feels unfinished, that is illustrated in a rough and sketchy manner. . .making the whole comic feel like it was done in a hurry.

Overall, despite its faults, Dracula Meets The Wolfman is a decent little piece of Halloween Longbox Junk.  There's not really much to it, but what IS there is a quick, fun read.  Don't pay full price, but go ahead and pick it up if you can find it cheap.

October ain't over yet.  There's still a bit more Halloween fun to come.