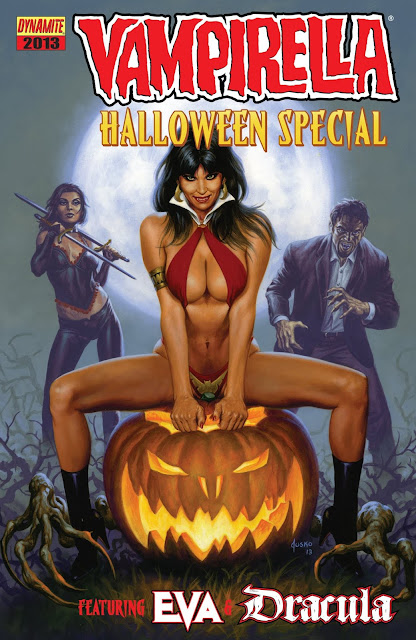 DYNAMITE (2013)
SCRIPT: Shannon Eric Denton
PENCILS: Dietrich Smith
COVER: Joe Jusko
Oh, my. . .
That's actually a pretty sweet painted Jusko cover, but there's NO way I'm hanging that up on my office wall.  And therein you can see part of my problem with actually buying Vampirella comics.  The covers alone invite a bit of judgement.  Moving along!
The story goes like this:
We begin not with Vampirella, but with Eva (who I guess is Dracula's daughter, and some sort of monster hunter.  I admit I have very little information on this "universe", beyond the fact that all the women wear as little clothing as possible). 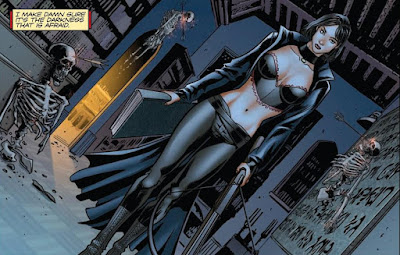 Eva reads about a ritual to summon a bear-headed Elder and heads out to stop it.  We jump forward a year to Ukraine where Vampirella gives a motorcycle to a random father and daughter out trick or treating and then heads in to confront a man who has kidnapped a girl and has her tied up in a creepy old house.  As soon as the battle begins, the most metro-sexual vampire NOT in the Twilight franchise jumps in out of nowhere.  Enter Dracula! 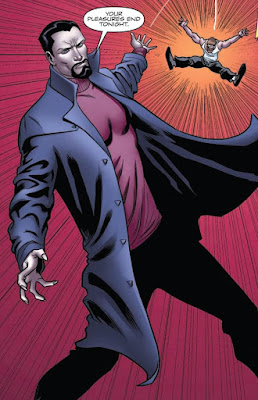 It turns out that the "girl" is actually a vampire and one of Dracula's consorts, and that the "serial killer" Vampirella was tracking is actually an animal-headed monster called a Wendigo, and as Dracula and Vampirella team up to take it down, Eva jumps into the fight out of nowhere to deliver the killing blow.

The three of them hold a short exposition meeting and realize that they have all been lured there for some reason.  Eva has the best lead on the coven of witches responsible, and so they reluctantly team up and jump into Eva's. . .er. . .ATTACK HELICOPTER (?!) and head out on the hunt. 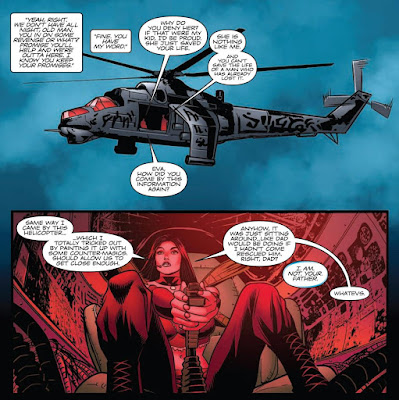 Magical attack helicopter is a bit unexpected and. . . HEY -O!

Check out the extremely subtle innuendo in the bottom panel

They arrive on the coast near a creepy ruined castle and. . .oh yeah. . .there's a couple of hundred man-bears creatures just sort of hanging out and waiting for their arrival.  Of course, Vampirella has the perfect solution for THAT little problem. . .MACHINE GUN! 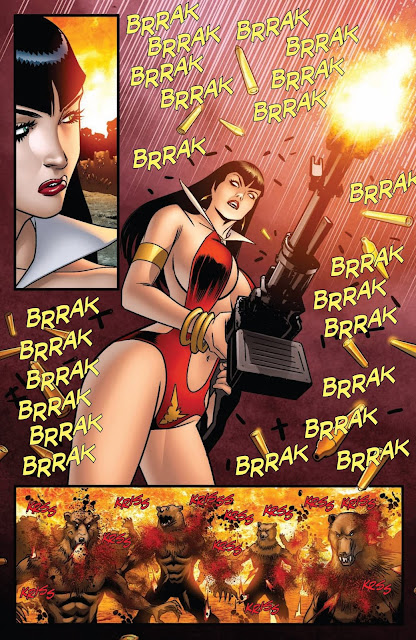 I'm no Vampirella expert, but this doesn't seem right.
So Vampirella is gunning down the ManBearPigs (Hello fellow South Park fans!), on the ground while Eva is strafing them with her attack helicopter.  Dracula takes a more traditional route as he transforms into a demonic man-bat form and rips his enemies to shreds with his bare hands.  The ManBearPigs finally take down the helicopter with. . .a spear. . .and it crashes, but Eva just walks it off out of the flaming wreckage like it ain't even a thang.
At this point, the ManBearPig fodder has been wiped out and all that remains is THE ManBearPig, who kind of hung back out of the battle until it was time for the boss fight.  Vampirella and Eva take on the boss ManBearPig while Dracula heads into the castle to stop the witches from raising the Elder .  The battle is a rough one, and the ManBearPig almost gets the better of Vampirella and Eva. 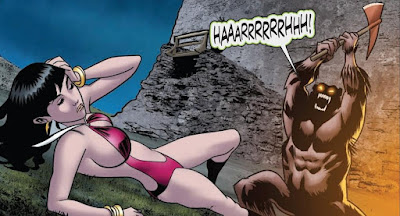 But by working together, they manage to bring the creature down and level their characters up! Who said these comics were just about ?

And then the story inexplicably takes a turn for the sentimental as we see that the random father and daughter that Vampirella gave her motorcycle to back at the beginning of things have sold the motorcycle and have use the money to move to the United States, and we close out on the two of them holding hands as their ship passes the Statue of Liberty.  Yay America?

From start to finish.  It's so bad.

I came into this comic with an open mind and willing to give it a chance beyond the HR red flag of a cover.  And what did I discover?  I discovered that my instincts about Vampirella were right.

This story is extremely weak and seems to exist only for the purpose of providing pictures of scantily-clad women.  And even THAT fell flat from time to time as there were occasional panels of art that looked unfinished and sloppy.  A couple of examples (2 out of about 6): 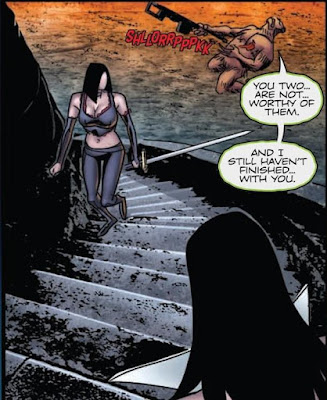 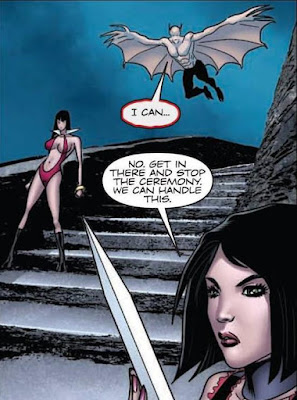 The artist left the faces off here, but at least the got done.

Generally speaking, the art is really the only thing this comic has going for it.  The editor allowing obviously bad panels like the ones above to get into a finished product shows me a definite lack of effort.

That obvious lack of effort is a bit of an insult. . .not only to someone like me who isn't a Vampirella fan, but to the Vampirella fan who paid a solid five bucks for this piece of .  It's pretty plain to see that Dynamite assumed that Vampirella's would have a built-in fanbase and just dumped this out.

CONCLUSION
I gave this comic a fair chance, even though I'm not a Vampirella fan.  It failed on almost every level.  The story is ridiculous, the characters are weak, and the art swerves from "pretty good" to sketchy and unfinished.
The whole thing shows a lack of effort and in my opinion was an insult to my comic fandom.  It's comics like this that keep this great art form firmly in the realm of the juvenile in the minds of many.  Unless you are a rabid Vampirella fan, I'd suggest you steer clear of this one.
Up Next. . .
Even MORE Halloween fun!
Be there or be square.