Continuing my month of Longbox Junk Halloween fun, I present for your consideration a little item I pulled from the forgotten depths of a dollar box a couple weeks ago.  I bought it for the awesome cover. . .but is the story inside a trick or a treat?  Let's find out!

CREATURE FROM THE DEPTHS 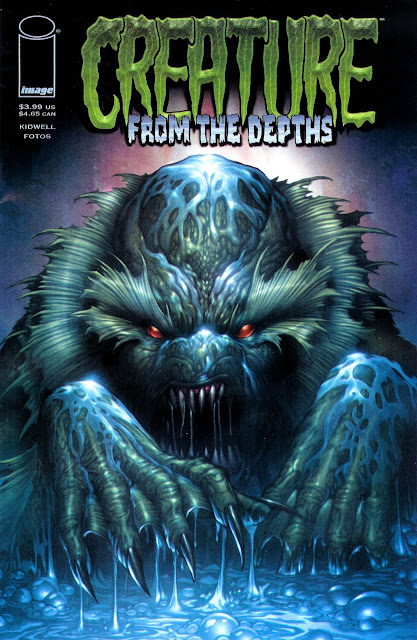 (So if it's bad, there's only ONE person to blame)

So I bought this one shot for the cover, and what a cover it is!  I love it from top to bottom. . .the creepy title font, the colors, the dripping fangs, the detail on the webbed hands, the bubbling water.  There's NOTHING I don't like about this cover.  After I write this review, this comic is going up on my office wall as part of my October Halloween comic cover rotation.  But we're not here just for a cover.

Herbert and Melinda, down on their luck husband and wife owners of a failing freak show, are approached by a mysterious gentleman with an offer of money and a strange tale to go along with it.  "Mr. Ahto" tells of a small village named Innsmouth where an underwater grotto not far off shore has been discovered to be full of ancient treasure.

Unfortunately, the grotto is guarded by a fierce creature and nobody has survived the attempt to loot the treasure.  Herbert was formerly a diver of some renown, and so Ahto wants to hire him to kill the creature and share the treasure.

Herbert agrees and, along with Melinda and a trusted assistant (Squib) they travel with Mr. Ahto and his two mysteriously clothed and silent bodyguards to the village of Innsmouth and set sail on the rickety steamer "Derleth" to the grotto. 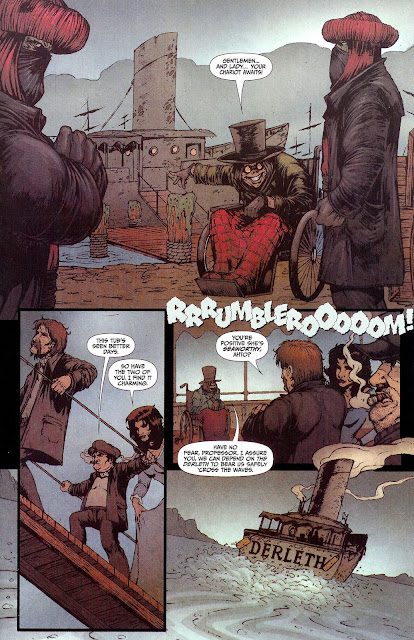 Nope. . .that guy they're working for doesn't look the LEAST bit sketchy, right?

Once there, Herbert dives and makes his way to the grotto, where he discovers a pile of treasure and a horrifying creature guarding both it and a nest of eggs.  Herbert dispatches the creature fairly easily and starts doing an "I'm in the money!" dance. 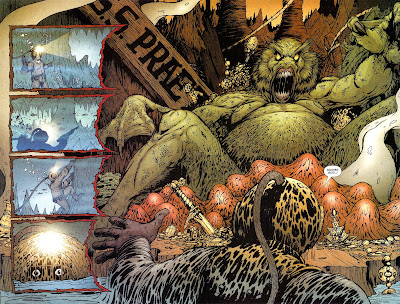 Now THERE'S something you don't see every day.

What Herbert doesn't know is that while he's celebrating his relatively easy victory over Momma Creature, on the surface the Derleth has come under attack by Papa Creature.  The monster kills Squib and Mr. Ahto's bodyguards during the battle. . .and they are revealed to be humanoid creatures themselves in the process.

Before Papa Creature can finish off Melinda and Mr. Ahto, he senses the death of Momma Creature and he heads back underwater to attack Herbert.

After an awesome silent underwater battle sequence, Herbert barely defeats the enraged Papa Creature and heads back up to the surface to tell everyone about his successful mission. 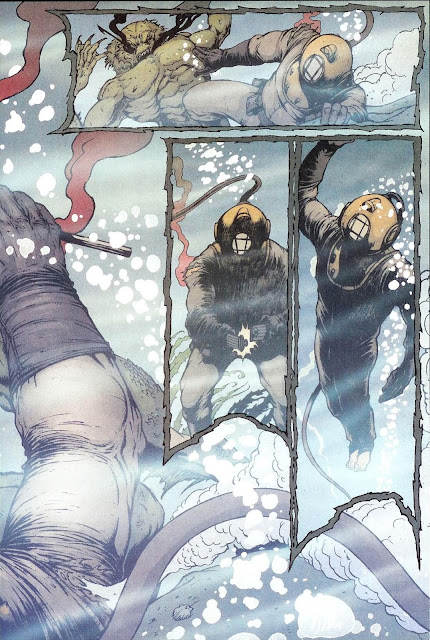 I DO love some silent storytelling!

When Herbert gets topside, he quickly discovers the carnage left behind during the battle that took place on the Derleth, but THAT'S not the worst news of the day.  Mr. Ahto has shed his disguise and reveals himself as a disgusting, tentacled monstrosity that is holding Melinda Hostage. 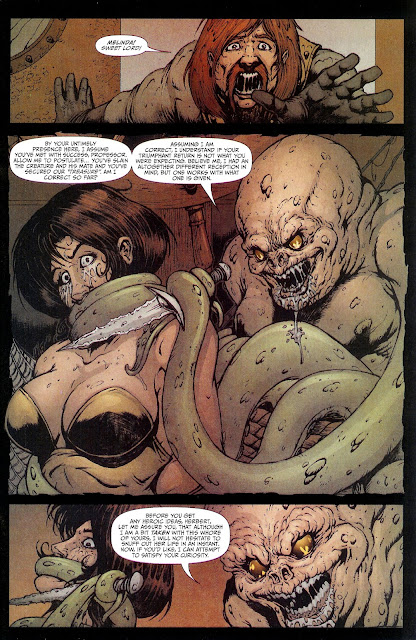 THIS is why you should ALWAYS check someone out before you head off on sketchy treasure/monster hunts with them.

Ahto gives Herbert a pretty lengthy villain monologue about how the treasure is cursed and transforms humans into aquatic creatures.  Ahto wants all the treasure so he can be the ruler of all the creatures, and so they can begin dominating the surface world as well. . .but the guardians were too strong for him to defeat, so Herbert was the perfect patsy.

Ahto gleefully informs the horrified diver that now the dirty work is done, Herbert's going to die and Ahto is going to keep Melinda for himself.  And with that, Ahto kills Herbert and we end with Melinda suffering a fate worse than death as the (heavily-implied slave) prisoner of Ahto, kept alive only by a thin oxygen line and surrounded by horrific creatures. 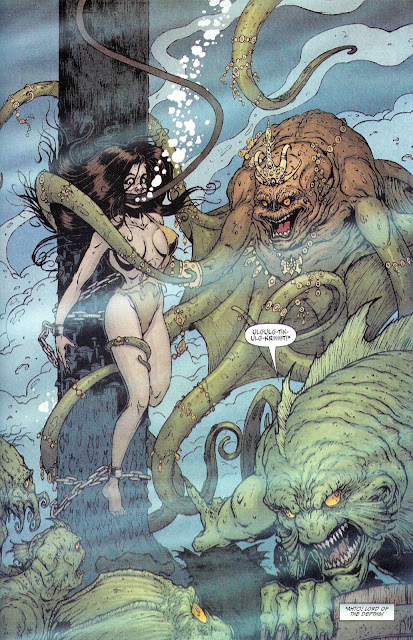 No happy ending in THIS comic.

So what we have here is a tale with a lot of obvious nods to the Lovecraft mythos.  It's pretty much a short Lovecraft story in comic form, but with a lot more gore and .  The implied sexual undertones of Lovecraft (and Derleth) are brought right up front in this story.  There's no scenes or nudity in the comic, but it's explicit enough that it's definitely not for kids.

For me, I liked the Lovecraftian tone of the story, and I enjoyed it a lot until Ahto explains everything with his villain monologue.  I prefer the more ambiguous Lovecraft endings where things are left more to the imagination. . .but I guess that's a bit harder to do in a comic book.

Still, even with a somewhat weak ending, I found this to be an engaging and enjoyable story.

The art is consistently good from cover to cover.  Kidwell is obviously of the Tim Truman school of highly-detailed, yet exaggerated art.  It edges pretty close to actually copying Truman in quite a few places (the design of Mr. Ahto is an example), but manages to stay JUST this side of being different.

From the awesome cover to the extremely bleak ending, I enjoyed this one shot.  It's a pretty simple story and has an ending that's a little too on the nose for me, but as far as a decent Lovecraft homage horror story with good (if a bit derivative) art goes, I can't ask for much more.  Pick this one up if you can find it.  It's a nice little piece of Longbox Junk.