To which I can only quote the great Will 'Wicky, Wicky, Wild Wild West' Smith and say: "Welcome to Earth!"

I've been having a bit of Halloween fun here at Longbox Junk, starting things off by reading and reviewing a set of DC Universe Halloween Special one shots.  The 2008 Special was disappointing.  The 2009 Special was a definite improvement, but still only half the book was any good.

The comic at hand this time is the DC Universe Halloween Special 2010.Will it continue the upward curve?  Let's find out! 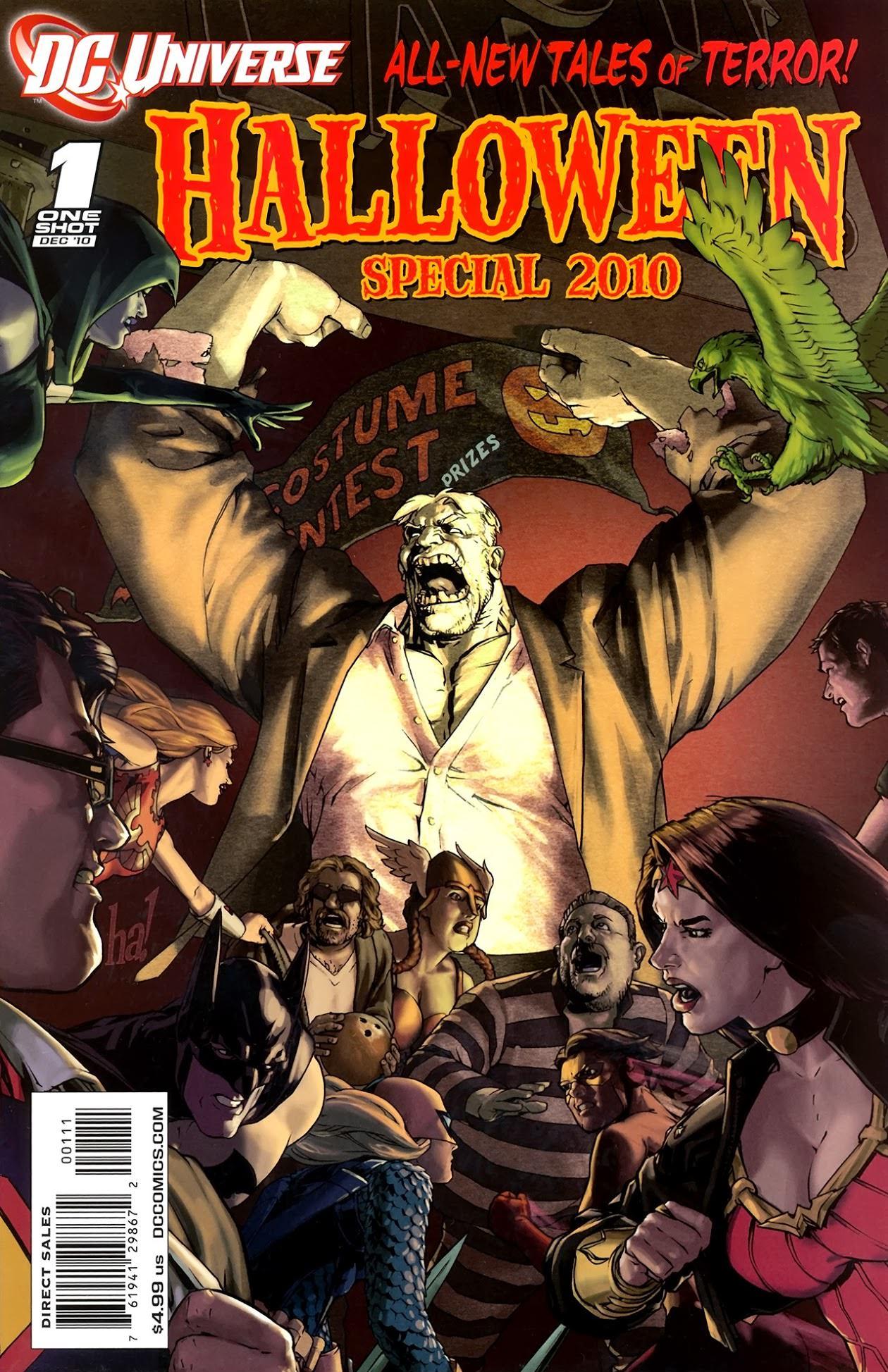 Only 6 stories this time out.  Let's break it on down and hope they're good ones. . .

BATMAN IN TRICK FOR THE SCARECROW

Scarecrow finds himself in need of rescue by Batman after being captured by two young boys on Halloween night.

The 2010 Halloween Special gets off on a good foot by putting the fantastic art of Billy Tucci right up front, along with a pretty good little story that is a direct sequel to Tucci's entry in the 2009 DCU Halloween Special.  This little tale has humor, heart, and a Batman who actually smiles!  A solid 4 OUT OF 5. 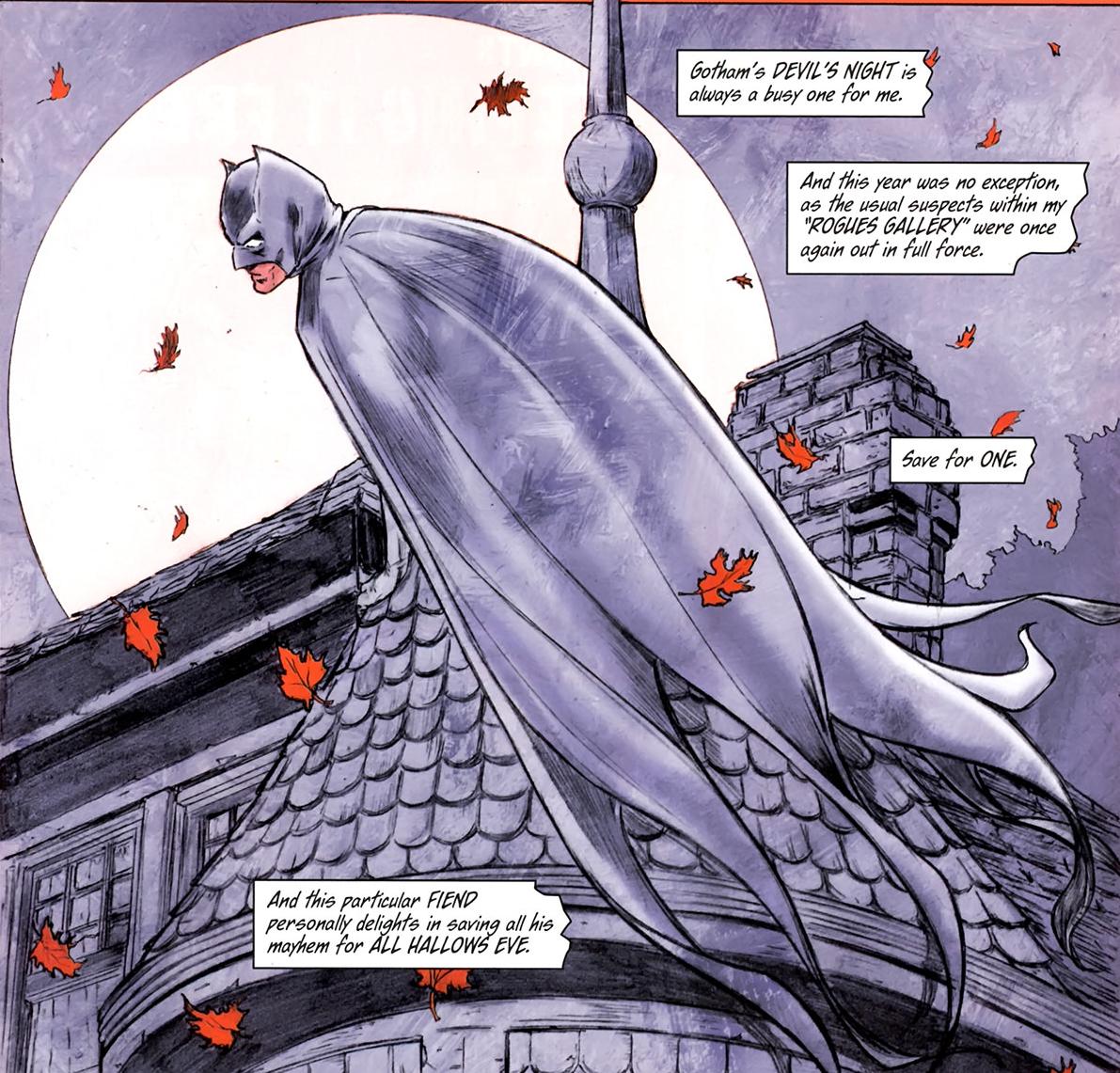 Batman on a roof framed by the full moon.  Classic!

BATMAN & ROBIN AND I. . .VAMPIRE IN ROBIN THE VAMPIRE SLAYER

Batman ( Grayson) and Robin (Damian Wayne) enter into an uneasy alliance with Vampire Andrew Bennett (I. . .Vampire) in order to take down a nest of vampires in Gotham City that are part of the Cult of The Blood Red Moon.

Another really good little story.  It's mostly Batman & Robin fighting vampires, but there's a bit of a twist (The cult is actually holding Andrew Bennett prisoner and he sort of tricked Batman & Robin into helping him escape) and it's well written with a spotlight on the adversarial relationship between Grayson and Damian Wayne that made their time as Batman & Robin so interesting to a lot of fans.  The art is also perfect for this story, being dark and strongly-inked with brilliant splashes of color in all the right places.  Another solid 4 OUT OF 5. 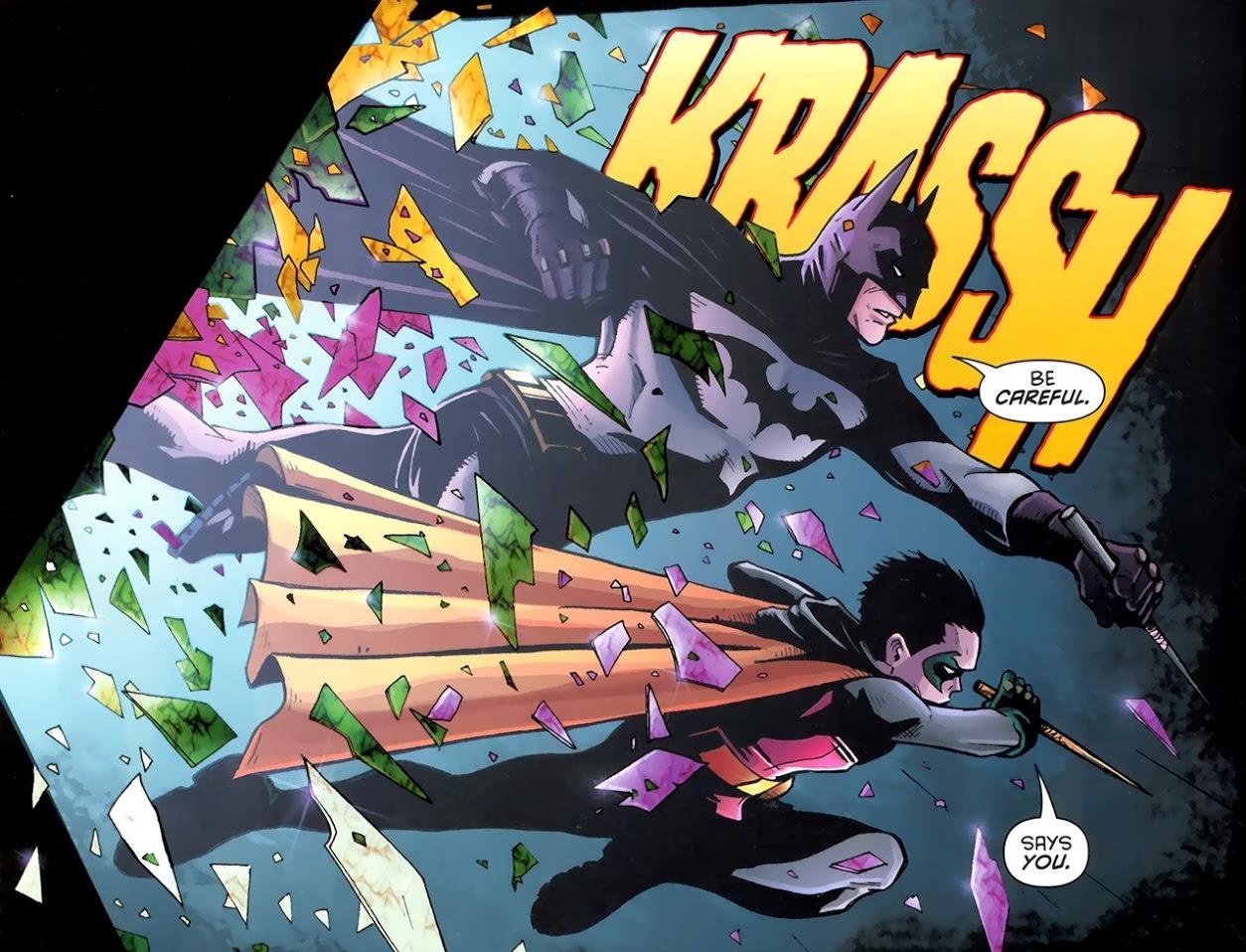 Batman and Robin jumping through windows never gets old!

THE FLASH AND FRANKENSTEIN IN TIME OR YOUR LIFE

When Iris Allen's new assistant turns out to be a soul-sucking vampiric creature during a Halloween party, Frankenstein shows up to help The Flash defeat her.

Frankenstein with a shotgun? I can dig it.

WONDER WOMAN AND DEADMAN IN A NIGHT TO REMEMBER

Deadman and Wonder Woman accidentally run into each other and team up to take down Felix Faust before he can summon a Godlike creature from another dimension.

After a very strong start, this Halloween Special is sliding downhill.  This story isn't bad so much as it feels forced and unnecessary.  I wondered when Deadman was going to show up in one of these Halloween Specials, but he just seems wasted in this "Two heroes accidentally find themselves at the same villain lair and team up" cliche punch-fest with a schmear of Cthulhu on it.  The art is very nicely done. . .so there's that at least.  2 OUT OF 5 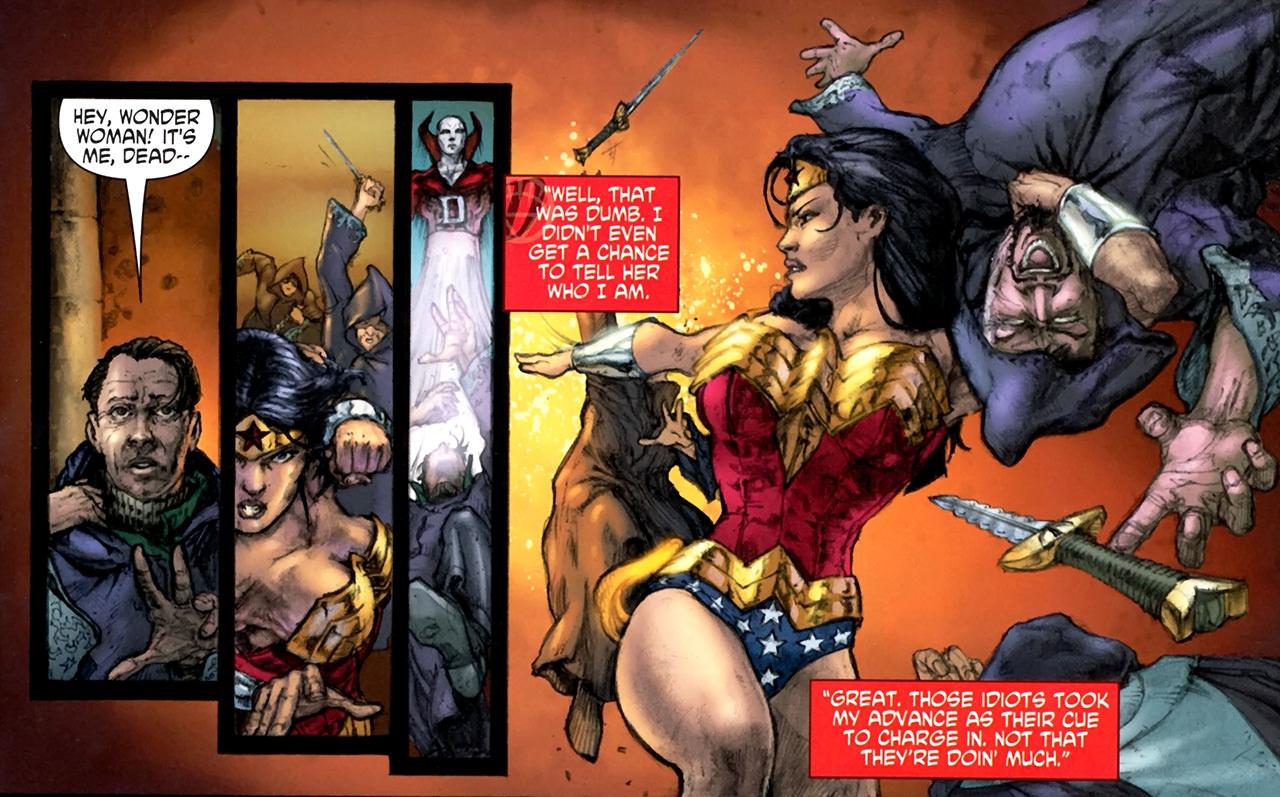 Well, at least the pictures are nice. . .

Miss Martian and Blue Beetle have their Halloween trick or treating ruined when Klarion the Witch Boy comes to Earth and starts turning people into stone.

The downward slide of this Halloween Special continues here as we get another punch-fest with only a tenuous Halloween connection backed up by some utterly average comic art.  There's a couple of funny moments, but otherwise this only deserves a 2 OUT OF 5.

Klarion's evil kitty is the best part of this story. . .

SUPERMAN AND THE DEMON IN FEARS OF STEEL

The Demon Etrigan helps save Superman's soul when another demon torments the hero with visions of his worst fears. 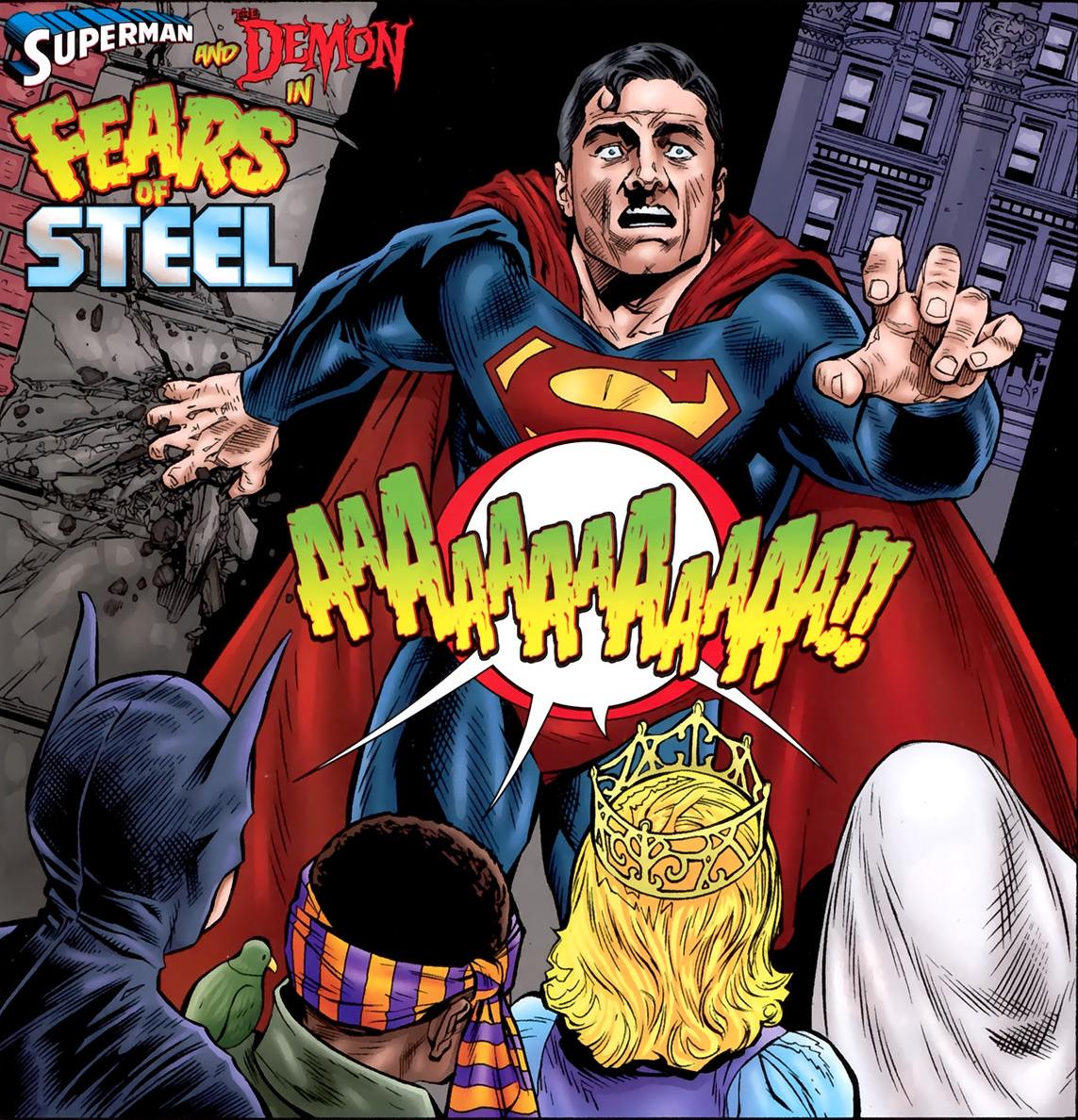 Yeah. . .that's what my reaction was when I saw this art.  And this is one of the good panels.

I liked it a lot when I saw this Halloween Special only had 6 stories.  I thought that maybe with less stories, there would be less filler.  And then when it started off with two great little stories in a row, I was like " YEAH!".  But then the rest of the comic slid downhill fast and it was like getting a apple in my candy bucket.

At least DC only charged $4.99 + tax for this one.  It's still about three bucks more than what it's worth for 2 good stories and some decent art.  Pretty disappointing.  I don't even want to read the next one.

How about I give the DC Halloween superhero anthologies a break (I still have 2 more to go) and continue the spooky fun with the comic sequel that nobody ever asked for to the unwanted sequel of a classic horror movie?

IDW's The Fly: Outbreak 5 issue mini OR (as I like to call it) The Fly III.

Wait.  You didn't know there was a Fly II? SURPRISE!