It's that time of year again!

We're having a bit of spooky fun here in Longbox Junk by spotlighting a few Halloweeny comics haunting my collection, and starting it off with some Halloween one-shots that DC put out a while back.  The 2008 DCU Halloween Special wasn't. . .well. . .so special.  It had great art, but on the story side things were pretty weak.

But that was last post.  The comic at hand for THIS post is the DCU 2009 Halloween Special, packing a whopping THIRTEEN stories and a hefty price tag of $5.99 + tax when it was on the shelf.  I was glad to have only paid a single lousy buck for the 2008 "Special".  Here's hoping DC stepped up their Halloween game a bit this time around. 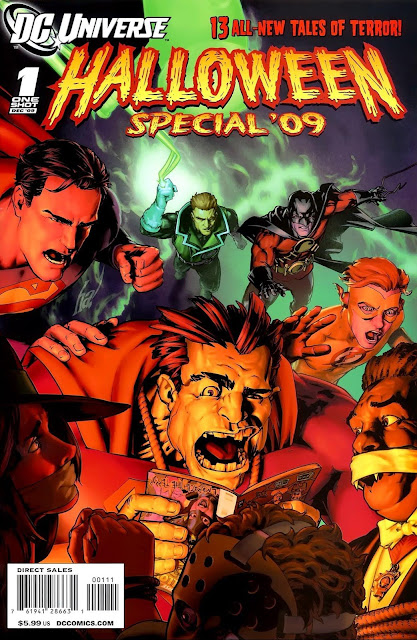 Bizarro goes trick or treating in his own special backwards way.

NOT a good start.  Bizarro is an annoying character to begin with, and this story is basically just him going trick or treating and doing everything backwards.  The art is nice, though.  I have a bad feeling that this 2009 Halloween Special is already going the same direction as the 2008 one with great art and weak stories.  1 OUT OF 5

Guy Gardner puts together a Halloween Party for the Green Lantern Corps.

The story here is pretty light, but it's actually good, with genuinely funny moments in it.  I really like Gardner's swagger and insufferable self-confidence as he convinces his fellow Green Lanterns to attend his party.  Oddly enough, the art is not that good on this one.  3 OUT OF 5

This is just a one-pager and there's not even really a "story" to be had.  It's really more of a showcase for Rouleau's over the top exaggerated art.  1 OUT OF 5

THE OUTSIDERS IN SEEING IS BELIEVING

The Outsiders fight against the Cult of The Blood Red Moon in an effort to stop a ceremony that will raise their vampire leader from the dead.  They manage to defeat the cult, but the ceremony was a distraction as elsewhere, Vampire Andrew Bennett (I. . .Vampire) is raised from the dead, and he's NOT happy.

This is one of the longer and better stories in this comic.  There's a pretty large cast of characters and they all get a moment, and the reveal of Andrew Bennett coming to life at the end is simply awesome!  Jones' artwork is extremely hit or miss here. . .with some panels being extremely detailed and others looking really sketchy and unfinished.  I give this one a 4 OUT OF 5. 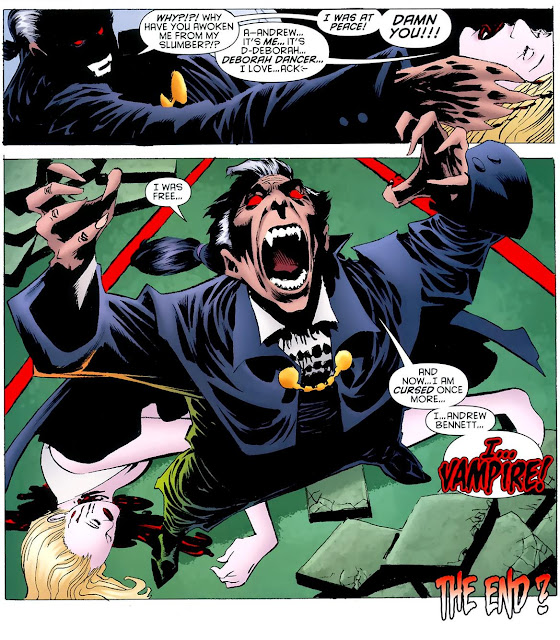 BATMAN IN HALLOWEEN TRICK OR TREAT

When Bruce Wayne's Halloween charity auction is attacked by Killer Moth, it's up to Batgirl and Robin to save the day.

I'm pleasantly surprised to find two good stories in a row!  Maybe there's hope for these Halloween Specials after all.  The title is a bit misleading as Batman doesn't make an appearance here, except as Bruce Wayne.  The story is illustrated in a realistic style that adds a lot to the feel of it. . .which is almost like revisiting  Batman: Year One a little later on down the line (especially since Robin is very young).  All in all, a great little story.  4 OUT OF 5

Damian Wayne tracks down a demented dentist on Halloween Night in defiance of Batman's ( Grayson) specific orders to stay at home.

Another good story?  This Halloween Special is on a roll!  I've always liked the somewhat adversarial relationship between Grayson and Damian Wayne, and this story definitely plays on that note.  It's actually pretty light, but Damian's internal monologue makes it seem to carry more weight than the throwaway villain deserves.  Nguyen's art seems a bit more angular and cartoony than usual but it delivers. . .even if Damian looks older than he should.  Another solid 4 OUT OF 5.

RED ROBIN IN OUR FATHER'S SINS

Tim Drake remembers a life lesson in how to honor the memory of the dead taught to him by Bruce Wayne during a visit to Mexico.

And we're back to weak stories propped up by fantastic art.  There's a graveyard and some talk about the Mexican Day of The Dead, but how this flashback/reflection on a long ago life lesson belongs in a Halloween comic is a question I can't answer.  The art, on the other hand is dark, moody, and some of the best to be found in this comic.  An extra point for the art pushes this one to 3 OUT OF 5. 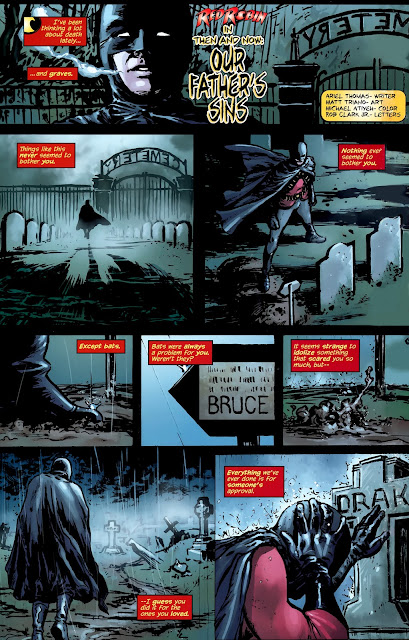 Not much of a Halloween story, except for this graveyard scene. But that's some mighty fine art, though.

RAVAGER IN LADY DOWN THE LANE

Some kids encounter Ravager while trick or treating.

Weak.  A well-worn "let's get candy from the haunted house" story told in a single page, where the "crazy one-eyed lady" the kids keep talking about is Ravager.  The art is average.  1 OUT OF 5

Kid Flash goes up against Mirror Master on Halloween night as the villain tries to escape the legendary Mary as she stalks him through the mirror dimension.

Another pretty long story.  Sort of surprising to see in a comic with 13 stories in it.  It's pretty good, but nothing special.  It's mostly one long super-hero/super-villain fight scene and not much of a Halloween story beyond the Mary angle.  The art is excellent.  3 OUT OF 5

BEAST BOY IN NEVER TOO OLD

Beast Boy tries to trick candy out of Cyborg on Halloween Night.

Another one-pager that seems to be more of an artist showcase than anything else.  It's a little amusing, but the punchline falls flat.  The art is fantastic, but I guess that's the point of this one.

WONDER WOMAN IN HAUNTED OR HOAX?

This story is pretty weak, and makes Wonder Woman look like sort of an idiot when she believes a "found footage" horror movie (obviously based on Blair Witch Project) is real.  It looks like this is another artist showcase, where the main point isn't the story, but Wonder Woman's (and Wonder Girl, Aquagirl, and Miss Martian's) .  2 OUT OF 5

SUPERMAN & THE FLASH IN TO THE FINISH LINE

Flash and Superman race to finally answer the question of who is faster.

This one is probably my favorite story in this issue.  Superman and Flash are revealed to be two kids racing to get to the last house on the block on Halloween night.  It has a great Silver Age throwback feel to it, and the art by Tucci is simply outstanding.  A solid 4 OUT OF 5 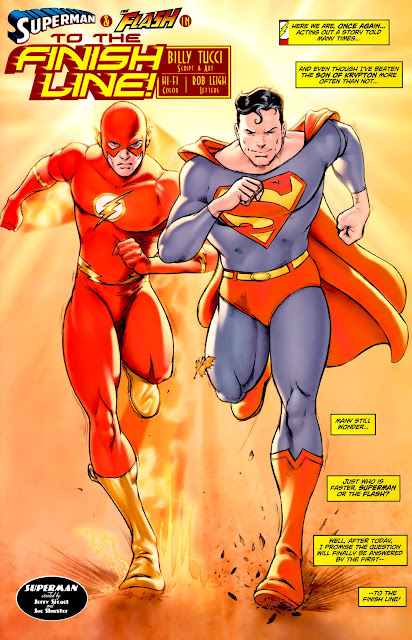 It might not be very "Halloweeny", but that's some good stuff right there!

SUPERMAN IN MY TURN TO BE SCARY

Superman decides that if Batman can be scary EVERY night, he can be scary at least one night a year. . .Halloween.  He uses his powers to scare 3 teenagers who claim to be too tough to be scared of anything.

And just as this Halloween Special started off weak, it ends weak.  Neither the story or the art is very impressive on this one. . .which is surprising after Nguyen's strong showing on the Damian Wayne entry.  2 OUT OF 5.

After my disappointment with the 2008 DCU Halloween Special, I was pleasantly surprised to find this one had some really good little stories in it.  They aren't ALL good by any means. . .some of them were real wastes of perfectly good ink, paper, and time.  But overall, I'd say that the 2009 Halloween Special is a much better read.

Is it worth the 6 bucks they were asking?  no.  With 4 good stories and 3 pretty good ones, that's STILL half the comic not stepping up to the plate.  It's a decent piece of Longbox Junk if you can find it in a bargain bin, but definitely not for 6 dollars.