It's that time of year again, folks!

The season when the barriers between the worlds of the living and the dead thin just enough for strange things to happen. . .like your otherwise normal female co-workers getting falling down ripped on spiked punch with dry ice in it and wearing JUST enough clothing to technically qualify as a "Costume" at the company party. . .IF "Costume" is defined as "What would normally require an appointment with the HR department for a talk about professional dress codes."

In other words. . .my favorite time of the year!

Why not carry a bit of that Halloween fun over into Longbox Junk?   This month, I'll focus on a few spooky, creepy, and otherwise Halloweeny comics floating around in my collection.

Let's start this off with some one shots!

Since these all have multiple stories in them (a couple have THIRTEEN), I'm going to post them separately as the month goes by. . .AND I'm going to throw in a couple of mini's as well.  HAPPY HALLOWEEN! 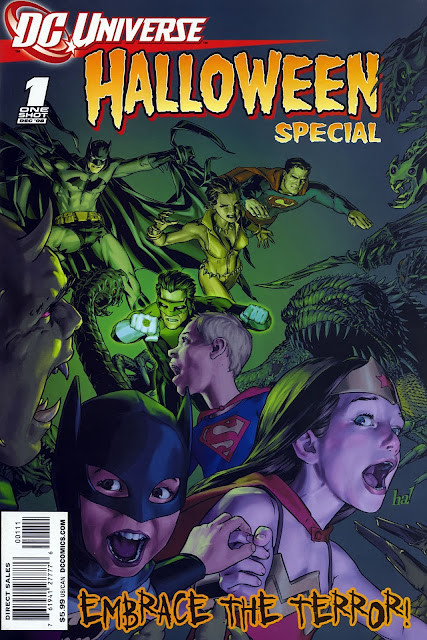 What we have here is one of a series of Halloween Specials that DC put out for a few years.  They had a pretty hefty price tag, but on the other hand DC packed these specials to the brim with stories.  There's 9 stories in this one, so there's a lot of ground to cover.  Let's break it on down. . .

On Halloween night Clark Kent gets help making a deadline by the ghost of a reporter haunting the Daily Planet trying to finish his last story so he can rest in peace.

This story is pretty weak, but has some nice art.  The best part is when a kid wearing an Azrael Batman outfit tells Superman that his costume is the worst he's ever seen.  2 OUT OF 5

FEAR OF THE DARK

Green Lantern Kyle Rayner is tortured by horrific visions of everything that he fears as he tests himself to prove that he's worthy of being a Green Lantern.

Another weak story propped up with some great art.  More filler than anything else.  2 OUT OF 5

THE BALLAD OF JONATHAN CRANE

A re-telling of The Legend of Sleepy Hollow with Jonathan Crane taking the place of Ichabod Crane and Batman taking the place of the Headless Horseman.  It turns out to be a hallucination after Scarecrow accidentally dosed himself with his own fear toxin.

A good (if a bit well-worn) story backed up with fantastic artwork.  The colors on this one are the real standout.  So far the best story in the bunch. 4 OUT OF 5

When Sebastian Faust is brought in as a consultant on a case involving magic and missing children, he finds himself drawn into a trap that frees his father, Felix Faust, from a magical prison.

I really have no idea who any of the characters in this story are, but it was interesting and had some really great art.  It reminded me a lot of Vertigo and Hellblazer of days gone by.  3 OUT OF 5

An extremely weak story that serves mainly as a showcase for the awesome Darick Robertson artwork.  An extra point for that great art squeaks this one to a 3 OUT OF 5.

Two damned souls trick or treat in under the watchful eye of The Demon.

This story was a confusing mess, but like the rest of the stories so far, it had some great art at least.  It seems like a bit of a wasted opportunity to use The Demon on such a weak entry.  2 OUT OF 5

The inmates of Arkham Asylum have to fight for their lives against a Werewolf.

I think I'm seeing a theme here beyond Halloween: Weak Story and Strong Art for every one of these stories.  Am disappointed.  2 OUT OF 5

Vixen's night at the movies is ruined by a magical projector that brings the monsters off the screen and into the theater.

Ralph and Sue Dibney use their ghostly powers from beyond the grave to solve the case of a murdered woman and a stolen inheritance.

I never knew that The Elongated Man and his wife were dead and operating as 'Ghost Detectives' in the DCU for a while.  The story was interesting, but really seems like it should have been a Deadman tale.  And once again. . .great artwork.  4 OUT OF 5

If I would have paid $5.99 + tax for this Halloween Special back in 2008, I would have definitely felt ripped off.  Out of nine stories, only 3 were good.  The rest felt like filler and artist showcases.  And even the few good ones weren't particularly scary or spooky in any way.  The only consistently good thing about this comic was the art, which was great on every entry.

If I had to describe this comic in one word, it would be: Disappointing.

I expect more from something packing a 6 dollar price tag.

Hopefully, there will be a bit more meat on the bone for the price they charged. Be there or be square!