One of my local comic shops is abandoning back issues in order to turn their back room into more gaming space.  A sign of the times for comic shops, I guess.  The result of this is that they have greatly increased the number of dollar boxes for me to hunt through. . .from 4 to 20! A nice little bonanza for a Longbox Junk lover such as myself.

This mini is one of my many new acquisitions I've come across.  Never heard of it and never read it until now.  Bought them for the sweet sci-fi military covers.  Let's do this! 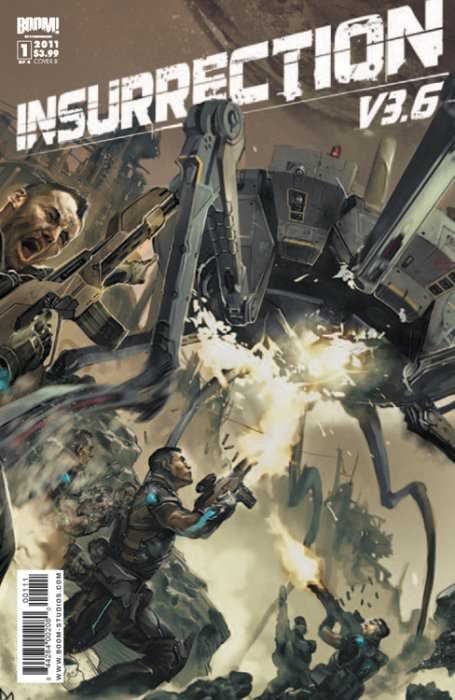 In the year 3000, GomRat corporation Vice-Consul Hal Windsor is assigned to the backwater planet of Sparta. Accompanying him is Tim 3.6, an "Aut" (cyborg) replacement for the combat team leader lost during the planet's takeover from the rival Retsu Corporation.

This first issue is mostly taken up with introducing the main players and the background of the story. . .the "auts" are regarded as disposable slaves in a decadent future society dominated by warring rival Corporations.

The story is derivative of several sources, so it feels somewhat like a comfortable pair of shoes. It's basically a hard sci-fi version of Spartacus, but with the artificial intelligence capable of emotion angle of a Blade Runner prequel.

The art is serviceable, with nothing really spectacular going on, but it tells the story without the distraction of being either really good OR bad. 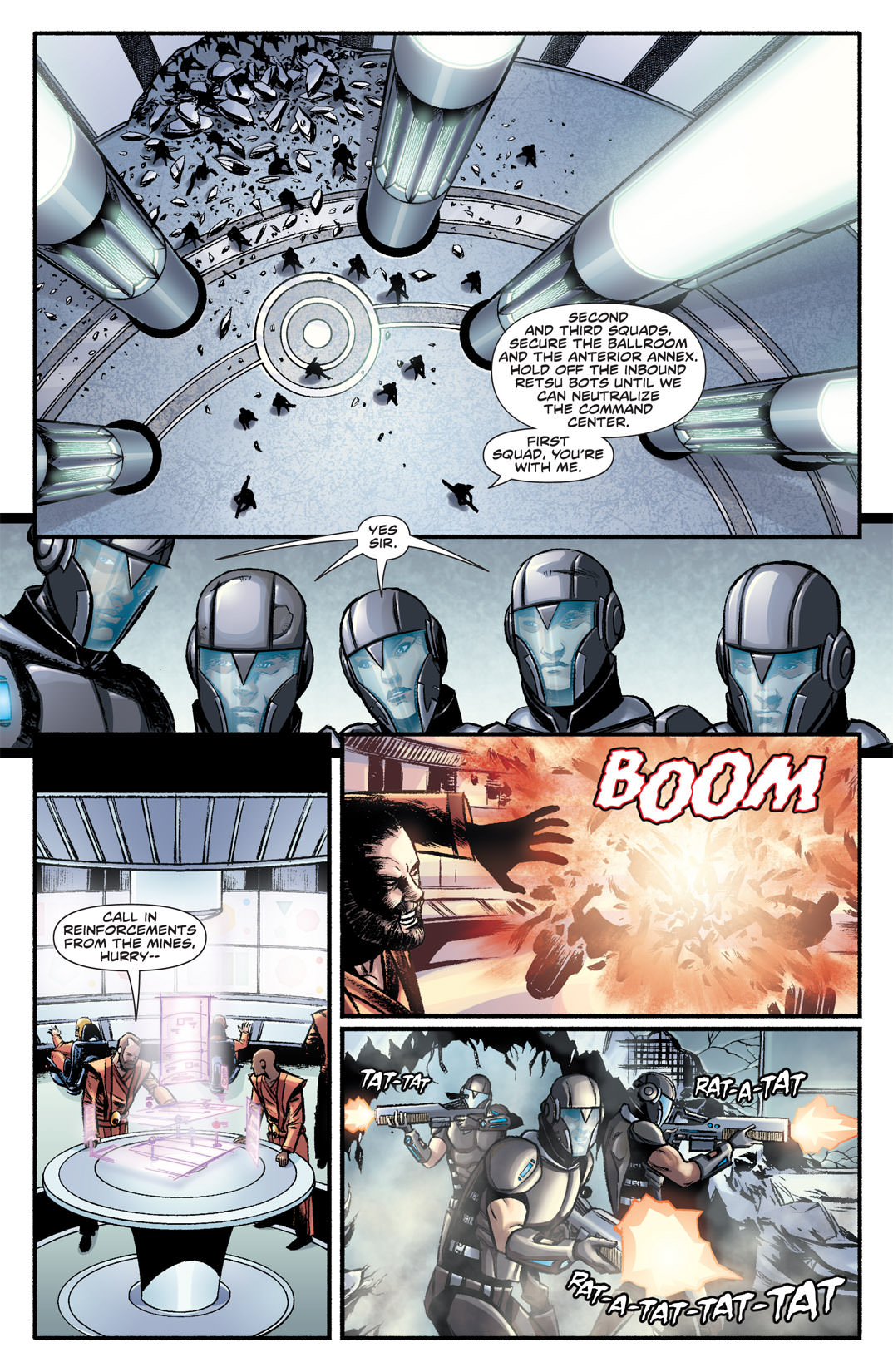 Overall, this first issue sets everything up very nicely. It's a well-worn story with average art, but I like a hard sci-fi with moral center type of story, so it still makes me want to get to the next issue. 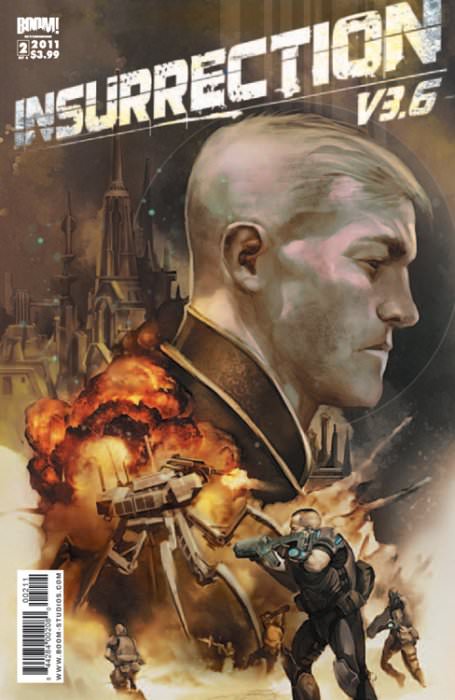 After defeating an attacking Retsu Corporation force, Tim 3.6 is forced to make a choice between loyalty to his men and loyalty to his masters when the Vice-Consul orders him to execute five innocent soldiers for the crimes of one.

Most of this issue is taken up with a spectacular battle between the GomRat Corporation "auts" and Retsu Corporation battle-bots as Retsu tries to re-take Sparta. While "auts" fight and die, the ruling humans watch them as entertainment during a lavish dinner party. Tim 3.6 is forced to make a moral choice toward the end and is able to break through his programming and defy human commands to brutally execute innocent "auts".

I really liked the buildup of tension in this issue and the contrast between the decadent humans and the "auts" they created to have emotion, but also to follow orders without question. This issue really reads like the prequel to Blade Runner that I never knew I wanted. 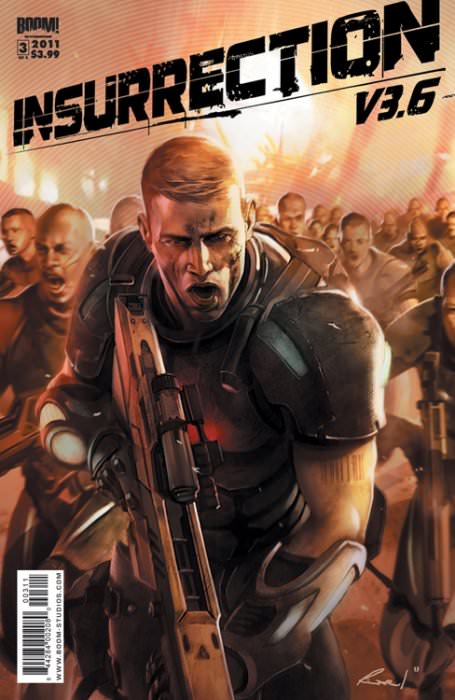 After being wounded and left for dead by the Vice-Consul, Tim 3.6 takes refuge with "aut" slaves in the mines of Sparta, where the seeds of revolution turn into a full-scale uprising. After making a tenuous alliance with Retsu Corporation, Tim 3.6 leads an "aut" force to rescue 2000 runaway "auts' who wish to join his cause, but finds out that the Vice-Consul has had them massacred. . .

After the strong setup and storytelling of the first two issues, this lead-in to the finale is a bit weak.

Not that it's BAD. It's still pretty good, but the well-worn nature of the "Hero rises to lead the oppressed in a revolt" narrative is exposed and pretty predictable here as Tim 3.6 vows to bring the fight to the Vice-Consul. The Spartacus influence is especially strong this issue and the art even makes Tim look a little like Kirk Douglas this time out.

Overall, not a bad issue. . .but definitely weaker than the first two. 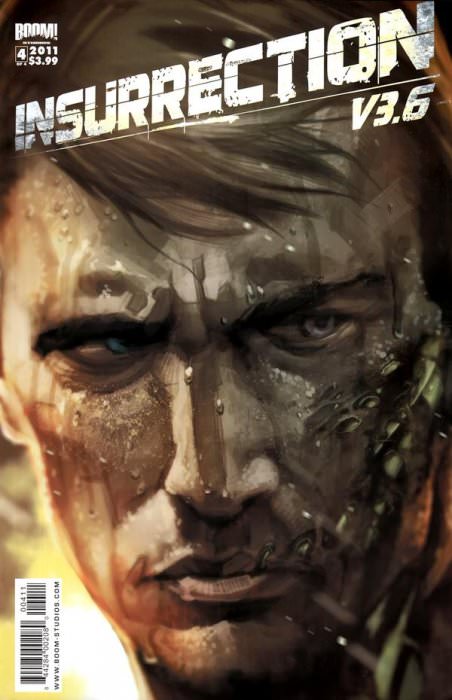 Tim 3.6 leads his forces into a final, massive battle attempting to take over the 'Aut" production facility on Earth's moon. With victory nearly in his grasp, Tim is betrayed by his Retsu allies and the rebels are massacred.

Tim himself is taken prisoner and his memory wiped by the Vice-Consul, who makes the former rebel leader into his bodyguard. . .but he discovers that the spark of rebellion remains in the cyborg and pays the price with his life.

Although the final battle and the betrayal of the rebel cyborgs is suitably epic, the ending is pretty weak and even a bit confusing. The memory-wiped Tim 3.6 going into hiding and slowly regaining his sense of who he is leaves things wide open for continuing stories, but the open-ended nature of the conclusion robs it of the emotional impact it needs.

Overall, this is a decent ending to the series that could have been better if it had been an actual ending.

What we have here is basically a hard sci-fi military comic heavily influenced by the story of Spartacus, with a decadent Earth dominated by rival corporations standing in for the Roman Empire and with disposable cyborg "auts" standing in for the doomed rebel slave army.

The question of "What is the worth of a man?" sits proudly at the center of this tale, just as it does in Spartacus.  There is also a distinct whiff of the Blade Runner's escaped "Replicants" and the same question at the center of that classic movie as well.  The first two issues read almost like a Blade Runner prequel of sorts.  I've always sort of wondered about the circumstances of the Replicants and their escape when I've watched that movie.

Overall, if you are a fan of hard military-style science fiction that asks some questions about humanity, I can definitely recommend this mini if you can find it.  The story is EXTREMELY well-worn and derivative of several sources and the artwork is on the good side of average, but it's still worth a read.

So much new Longbox Junk to choose from!

I'm trying to decide between some One Shots (I DO love the One Shots!) or the Alien vs. Predator: Eternal 4 issue mini.