I really like The Falcon as a character.  I'm gonna step outside the lines here and admit that I REALLY liked Sam Wilson as Captain America and was pretty disappointed that Marvel didn't have the guts to hold the line on keeping Steve Rogers an old man passing the shield on to a worthy successor.

The Falcon has always had a bit of a problem carrying a series.  It's like Marvel feels like they HAVE to somehow keep him in the lane of literally being a Social Justice Warrior, and to me that's okay. . .in small doses.  Eventually it breaks down because you can't have a character that only appeals to a certain way of thinking over the long term.  I'm not being racist or any other kind of -ist. . .just telling the truth.

So what we have here is The Falcon's first solo run.   A 4 issue limited series from 1983.  There's a definite difference between the first issue and the other 3 because the first issue was actually done in 1981 as a standalone story for the upcoming "Marvel Fanfare" title that was never used.

Sam Wilson didn't get another Solo series for THIRTY-TWO YEARS with "All New Captain America" in 2015. . .The whole thing reviewed for your reading pleasure by yours truly HERE:

Let's take a look at the series at hand and find out if we can find any clues why, shall we?

ISSUE ONE: WINNERS AND LOSERS 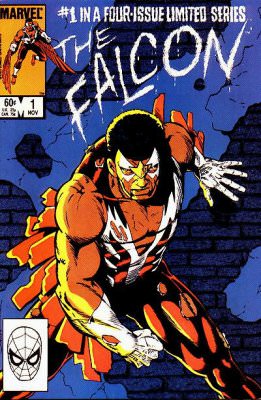 Social Worker Sam Wilson (AKA The Falcon) fights in both of his identities to save a young man from going down the wrong path.

In the meantime, Falcon teams up with a hard-hitting detective to take down an armored criminal intent on destroying a new housing project.

The first part of this mini is basically a self-contained issue following two storylines.

The first, with Falcon trying to keep a young man out of trouble and put him on the right path introduces us to Sam Wilson : Social Worker and firmly sets the scene in ghetto Harlem. It also serves to introduce Sgt. Tork. . .a cop who breaks the rules to get the job done, but a good cop.

The second storyline involves a new housing project being built that is attacked by an armored villain calling himself "Nemesis". It eventually turns out that Nemesis is actually the slum lord developer of the building trying to pull an insurance scam.

Both of the stories taken together are pretty enjoyable and well-written. The first has more character moments and the second delivers the superhero fighting action.

What I like a lot about the writing here is that it seems like you're dropping into a story in progress. There's no Falcon origin story here, and even though this is listed as Sgt. Tork's first appearance, there's no origin for him either.

The writer doesn't hold your hand here, he just lets the story start like it's already been going on without you. . .but there's JUST enough exposition so it's not hard to figure out what is what. Very well done, and there's modern writers who could certainly learn a thing or two along these lines.

The only real problem is that the dialogue is definitely dated. There is no mistaking that this comic comes from the early 80's because it's just dripping with a "The 70's ain't QUITE over yet. . .dig?" tone.

The art is really quite good for a mainstream superhero comic coming in at the end of the Bronze Age. It's fluid and detailed, with a great sense of movement and animation. It's also colored well, unlike a lot of late 70's/early 80's comics I've read. 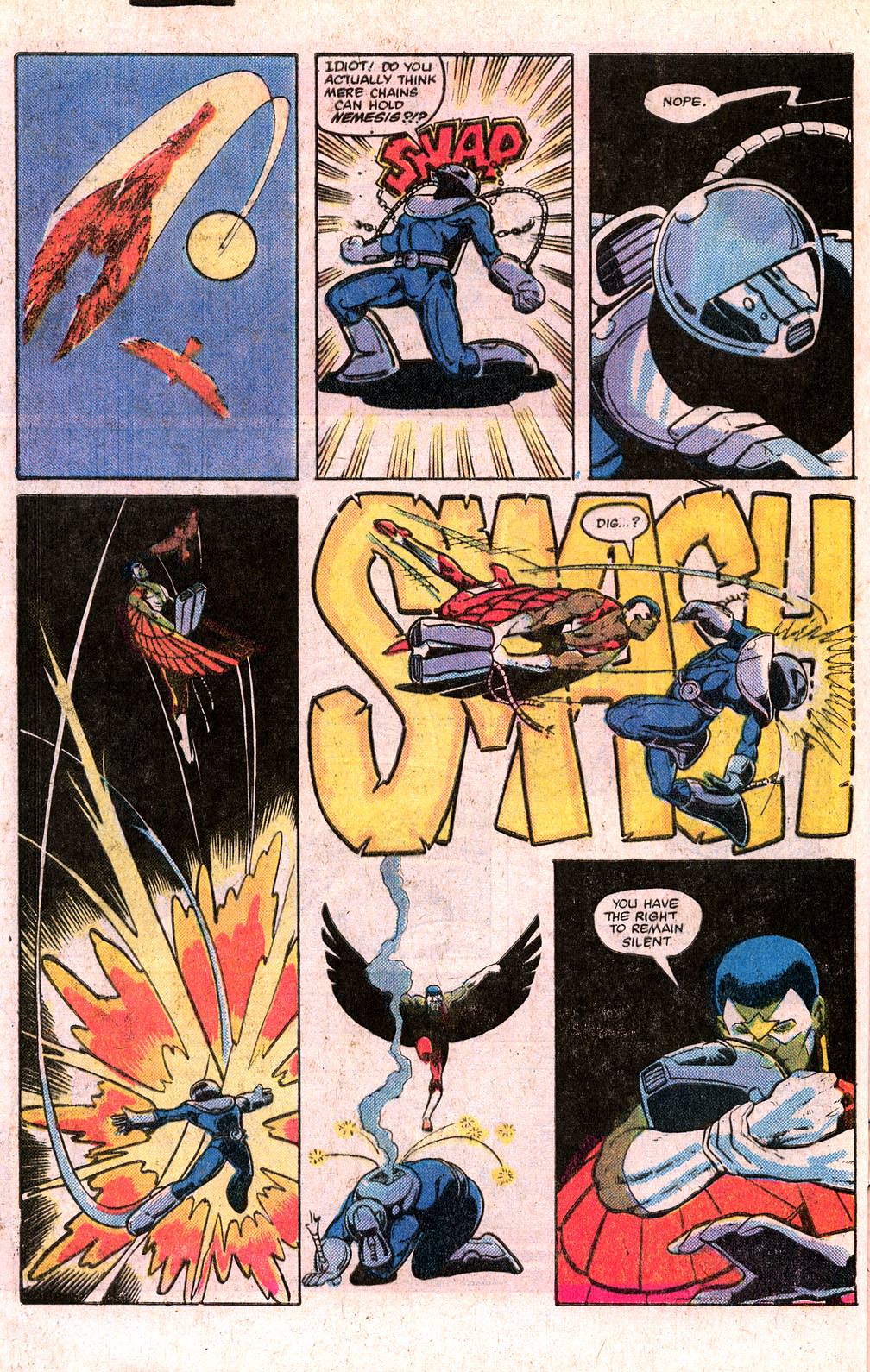 Overall, despite some really dated "street talk", I liked this first issue a lot. Even though it's an introduction, it doesn't feel like one at all. 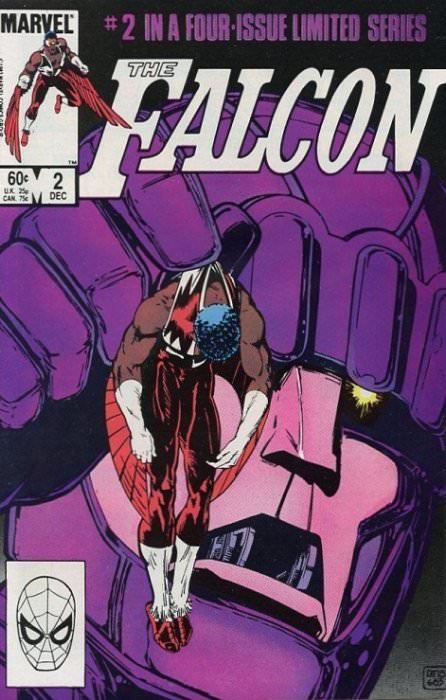 When Falcon fails to show up and keep the peace during a parade, Harlem erupts with violence and rioting after a rookie cop accidentally kills a gang member.

In the THIRD retcon (in the 9 years of the character's existence at that point) of his origin, Falcon battles a Sentinel and discovers that he's probably a mutant.

First off, we get an art team change beginning with this issue. Although it's not BAD, the first issue's art team is clearly superior.

The ink lines are thinner, the backgrounds are busy enough with detail that the main focus is sometimes lost, there's a lot of "movement lines" that are pretty distracting during action scenes, and the coloring gets a bit sloppier. 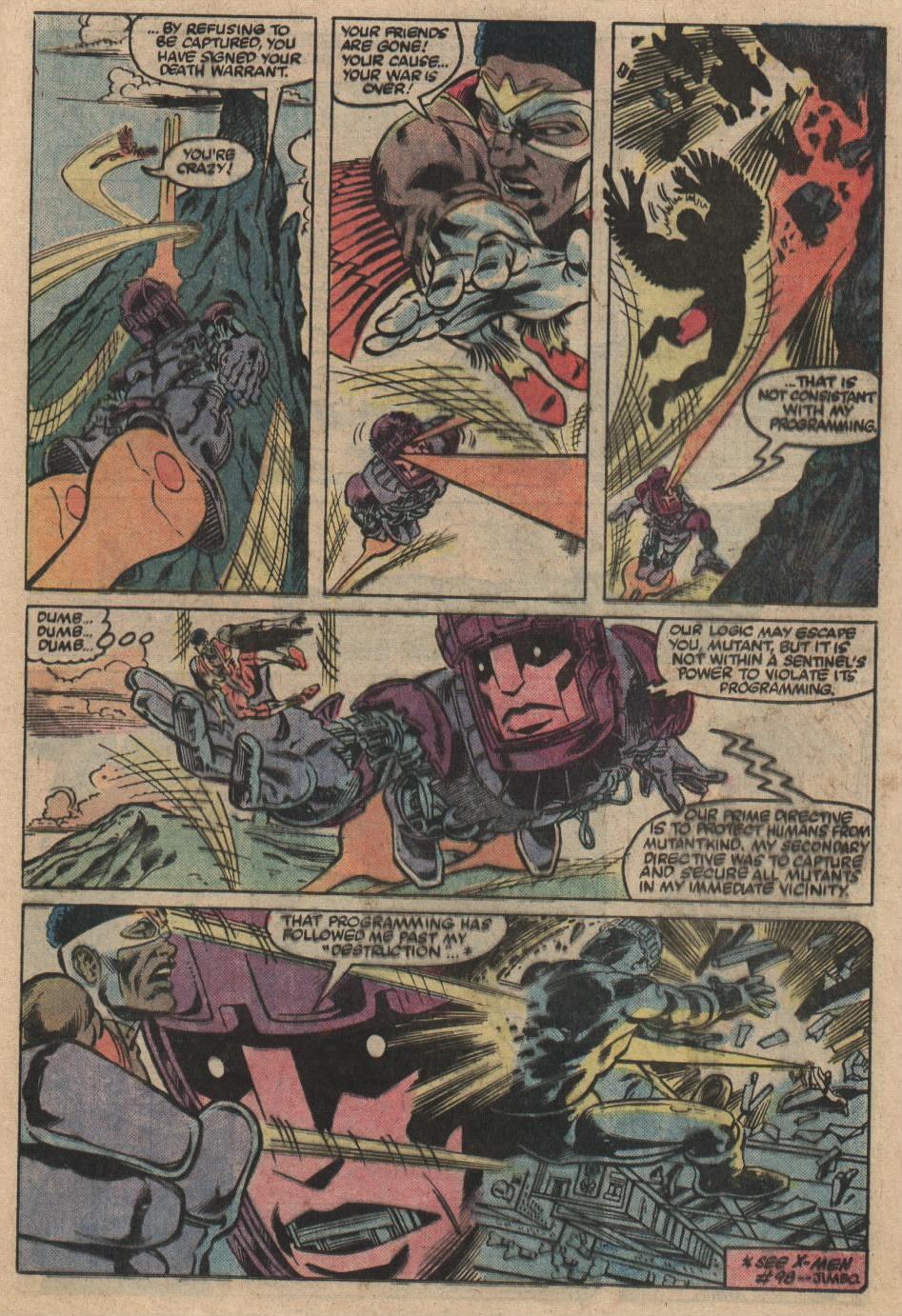 Featuring the most talkative Sentinel EVER!

Overall, the art goes from interesting and engaging to typical 80's comic fare. Like I said. . .it's not BAD, just disappointing after the great job done on the first issue.

Most of the discussion and information I could find about this mini on the internet revolves around this particular issue, as it tries to retcon Falcon into being a Mutant (probably to tie him into Marvel's cash cow X-Books of the time).

It seems a bit of a stretch, especially since they do some exposition on Falcon's "Snap Wilson" origin in the very next issue. Plus it seems like more of a weak excuse for a fight against a Sentinel than anything. I guess I can't blame Marvel for trying.

The second storyline, involving Harlem erupting into violence when a cop shoots an innocent man during a parade, is more interesting even though Falcon doesn't show up until the end of it after escaping the Sentinel and realizing he's got a of a mess to clean up.

Overall, this issue is a slip in quality from the first. The art change is for the worse and most of the issue is taken up with Falcon punching a giant robot.

It's not BAD, it's still pretty good. Unfortunately, it's not much more than that. 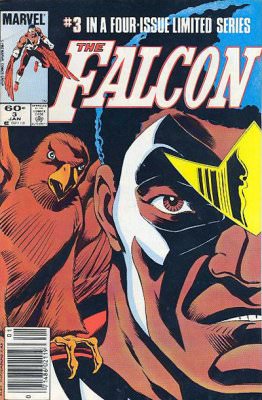 After the Harlem riots, President Reagan visits on a fact finding tour, only for the motorcade to be attacked and the President kidnapped by The Legion. . .the strongest street gang in Harlem.

And then Captain America shows up.

Unlike the previous two issues, where they were basically two connected but separate stories, this issue contains a single story continued directly from the previous issue's riots.

It's mostly action, with Falcon rescuing people from fires and then battling Electro through most of the issue. There are some decent story moments that mostly revolve around exposition of Falcon's "Snap Wilson" criminal background origin story, but mostly it's Falcon and Electro fighting it out for pretty much no reason. . .Electro mistakenly believes that Falcon is looking for him, so he goes on the attack.

The art in this issue is the worst of the bunch so far. The panels are extremely cluttered and the coloring is pretty bad. It all looks extremely rushed. The reveal of Captain America on the last page is a particularly poor rendition of the Star Spangled Avenger. 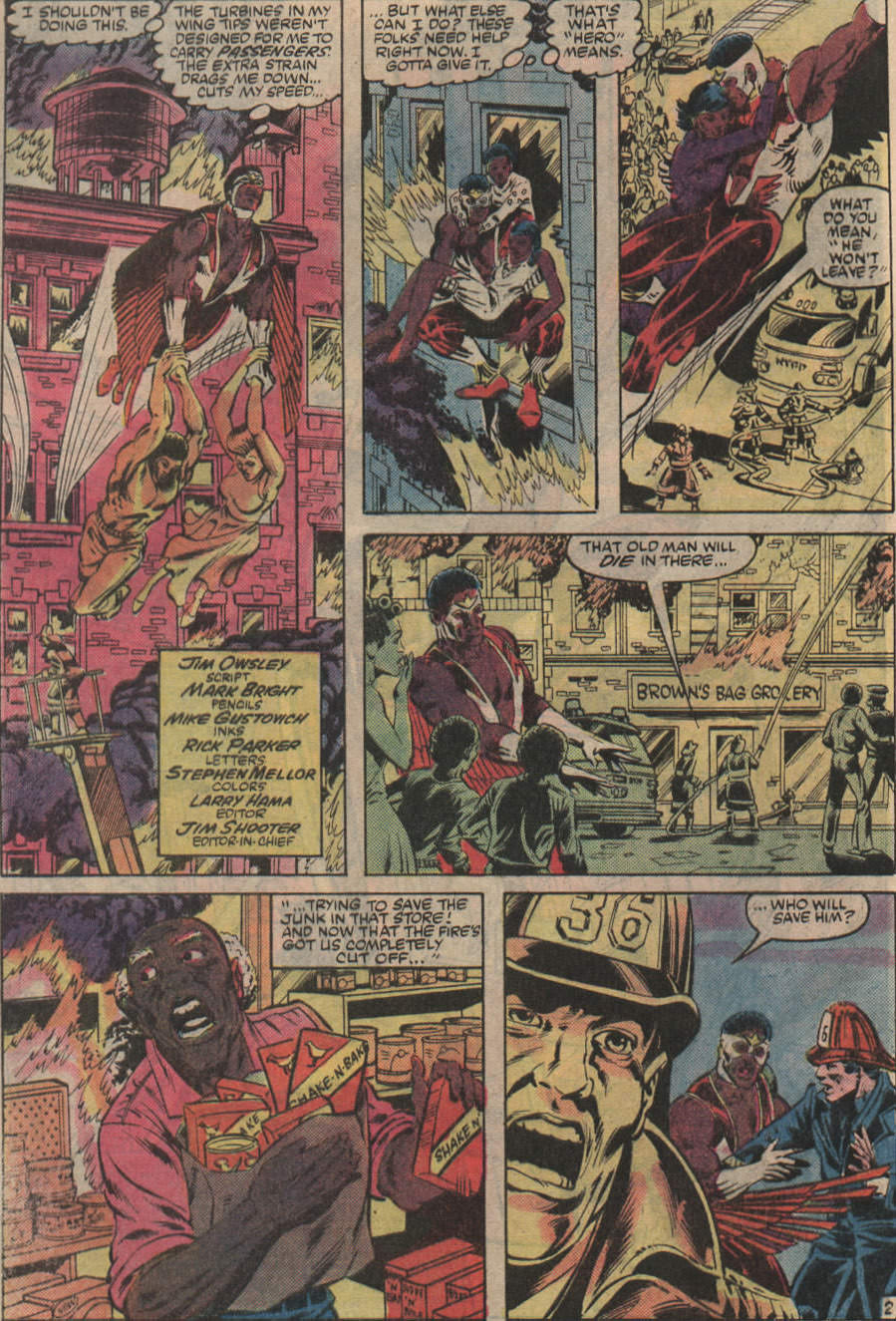 Found in the internet dictionary under: Lazy Coloring

Overall, the worst issue of the series so far. It's mostly super people punching each other for pretty much no reason rendered in a rushed, badly-colored manner. 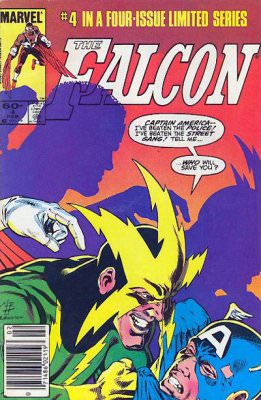 Captain America and The Falcon take separate paths to the same goal: Rescuing the kidnapped President of The United States from Electro and The Legion.

This final issue wraps up the series with a lot of punching topped off with a heaping helping of Political Progressive Agenda.

What I'm trying to say here is that if you are they type of person who might have a problem with a perception of "SJW Taint" of today's comics. . .your head will friggin' EXPLODE from this issue. The implied progressive agenda present in today's comics are pale and weak compared to the straightforward urban liberal progressive message laid out in this comic. Fair warning.

That said, I want to throw out that I'm NOT the guy who is going to grit my teeth at SJW messages in comics. I LOVED Sam Wilson as Captain America and sincerely wish that Marvel had the to keep it that way. . .but even as Zen as I can be about this stuff, this comic was a little too much.

Like I said above, it's mostly fighting. . .but it abruptly stops and becomes a social justice PSA about how much life sucks for minorities. . .filtered through the lens of Ronald Friggin' Reagan being mansplained by a gang member while tied to a chair with Captain America and The Falcon just standing there nodding in agreement. 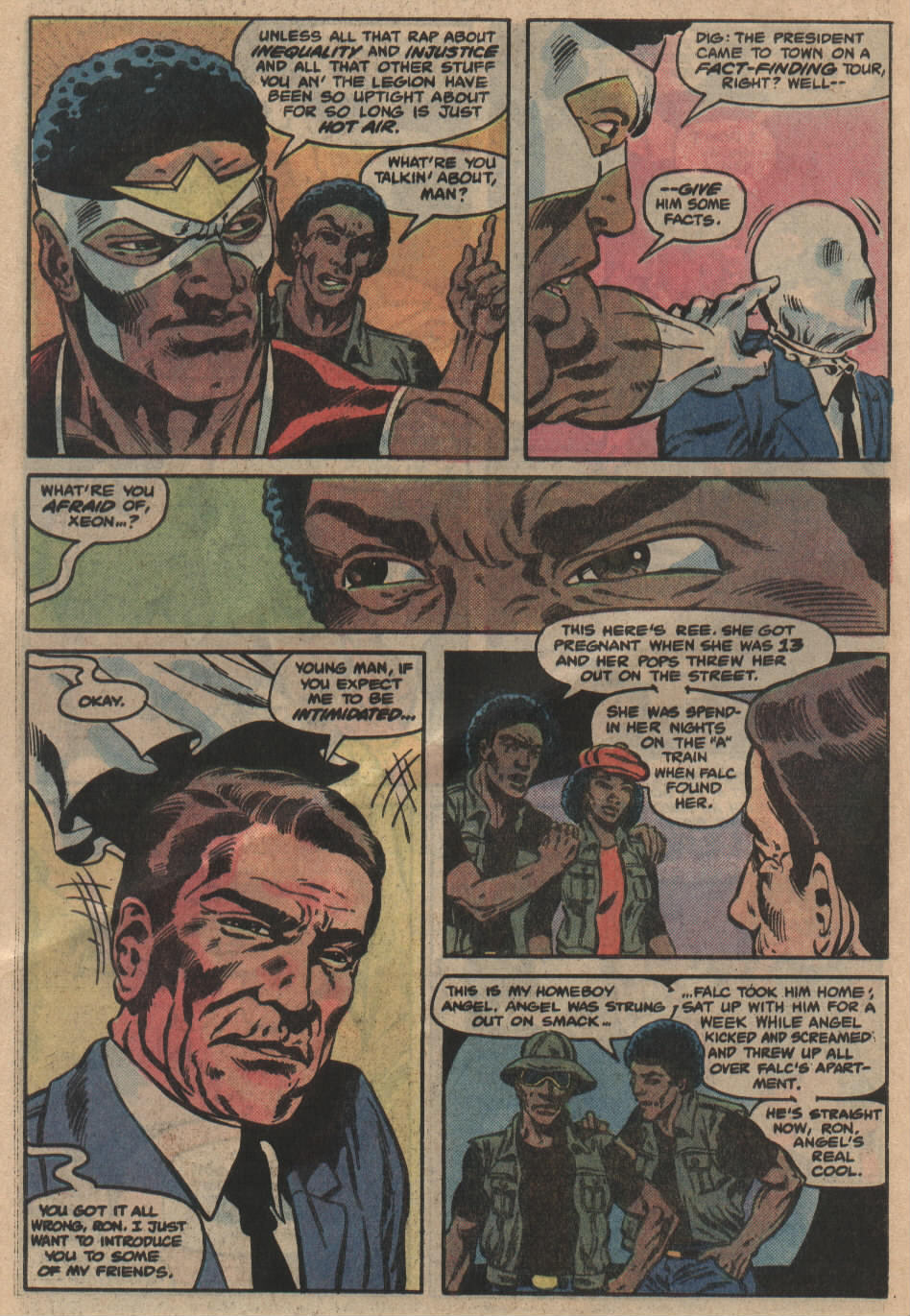 Colonel Trautman? When did YOU become President?

Overall, I found this concluding issue to be a bit of an eye-roller. Not only is the Social Justice message extremely heavy-handed, but the art barely hurdles the bar of "okay". The depiction of Captain America is pretty bad, and Ronald Reagan looks more like a discount Richard Crenna.

This limited series can be described in one word: Conflicted.

It's pretty plain to see that the writer wanted to focus more on the Sam Wilson: Social Justice Warrior aspect of the character than The Falcon: Superhero side of things. . .so we have a story that swings wildly from The Falcon punching giant robots to President Ronald Reagan being mansplained about how it's HIS fault life sucks in the ghetto.

Overall, I'd say that despite the heavy-handed political agenda that creeps in along the way, The Falcon is worth a read if you're a fan of the character.  If you aren't already a Falcon fan, this mini won't do a thing to change your mind.  If you are the kind whose head explodes at the notion of "SJW agenda" in comics. . .don't even bother.