Yeah, yeah. . .I know.  I said Aliens vs. Predator was up next.  I found out I don't actually have all 4 issues of that series.  I'm missing the final issue.  I have 2 copies of different covers for #1, so I saw 4 issues in the box.

After Marvel backpedaled on the "Death" of Captain America and put the character through a convoluted wringer to get him back into continuity, they seemed to have a bit of a problem deciding what to do next.

I couldn't find much information about this stage of Cap's career, but this odd little mini looks like it was SUPPOSED to be an ongoing series. . .especially since it has an Annual issue (that I don't have), which is sort of strange for a mini.  And then there's the ending, clearly setting up an ongoing story with a character that never appeared anywhere else other than this mini.

I'm not sure what happened, but clearly Steve Rogers: Super-Soldier wasn't the Captain America fans had been waiting for.  But is it any good? Let's find out! 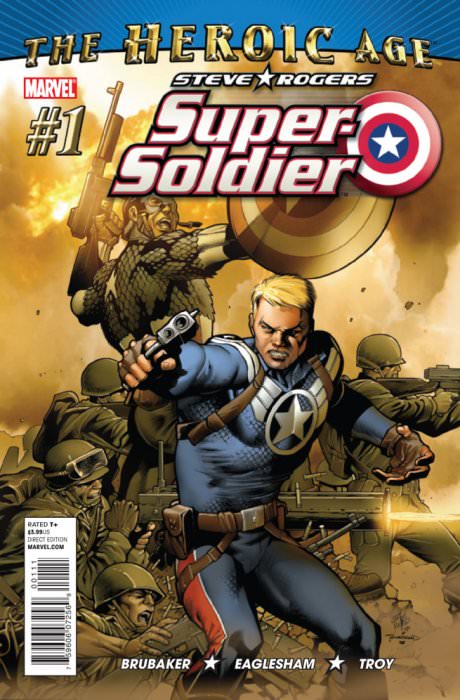 Steve Rogers receives information that the grandson of Dr. Erskine (who developed the original super-soldier serum) has perfected the lost Super-Soldier formula and plans on selling it to the highest bidder. Rogers heads to Madripoor to put a stop to the auction and when Jacob Erskine is assassinated, discovers there's more to the story than he was led to believe. . . I really liked this first issue quite a bit. There's a lot of story packed into a single regular-sized issue. We get Captain America in less of a super-soldier and more of a super-spy role as he investigates Jacob Erskine and the return of the Super-Soldier formula. We see Rogers following leads, infiltrating a heavily-guarded hotel by way of disguise at a lavish party, and discovering threads of a larger conspiracy when Erskine turns out not to be the villain Cap thought. This reads more like a James Bond story than a Captain America comic, and I like the change a lot!The art helps sell the story. . .nicely-detailed and darkly-inked lines and perfect colors that really make the panels pop. The action scenes are fluid and really showcase Cap's martial arts skills as he stealth-fights his way to the top of the hotel. 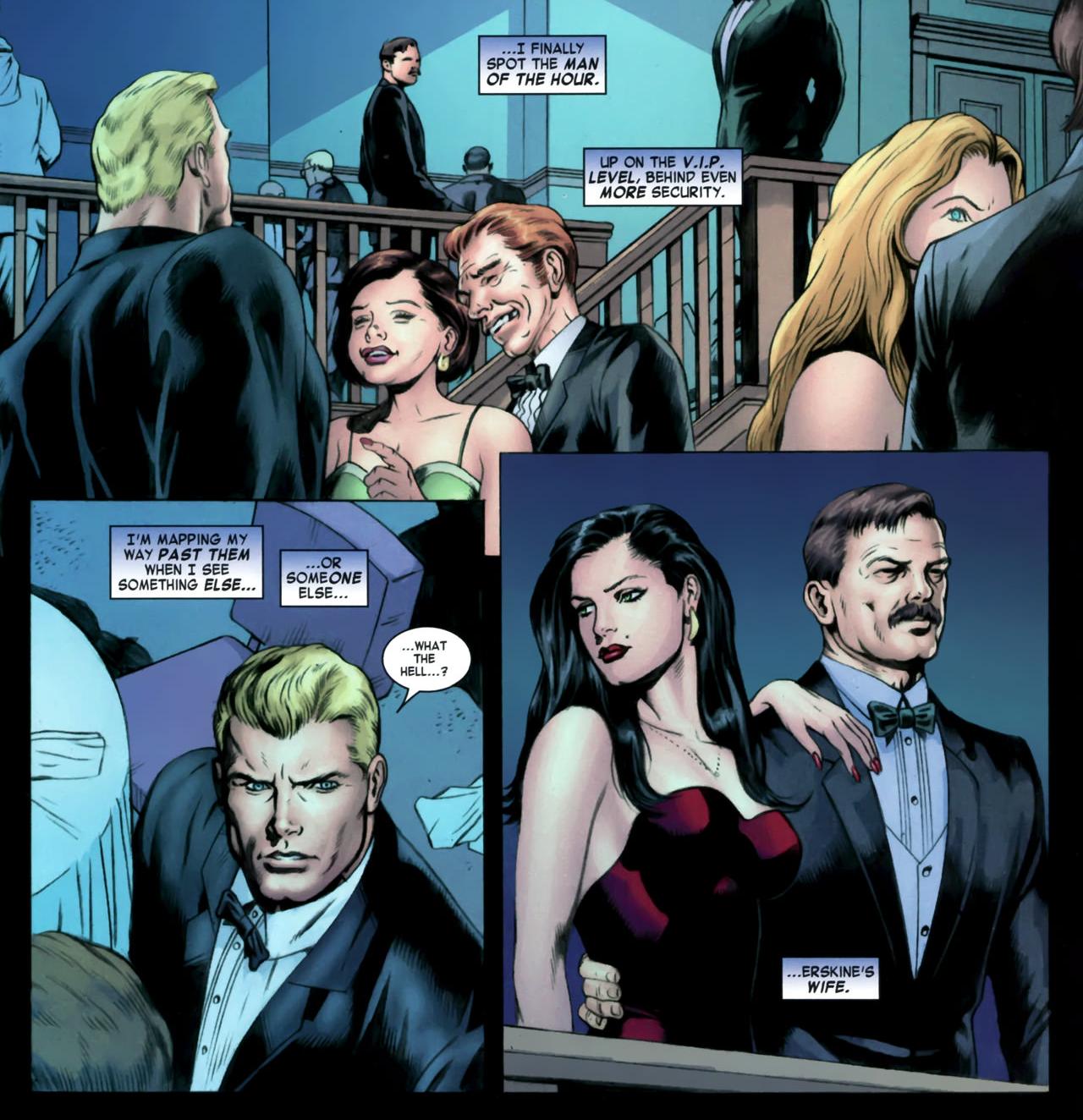 Captain America with tuxedos and femme fatales?  I like it!

Overall, this issue hits it out of the park, with an engaging super-spy story and fantastic art. All that PLUS a backup of Kirby and Simon's first Captain America story. . .which is interesting, but honestly hasn't aged well at all. This one's a winner!

A PAST THAT KILLS 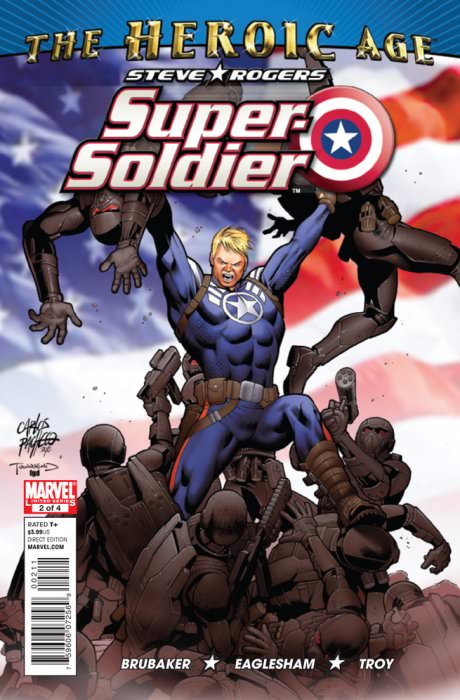 After Jacob Erskine is assassinated and dies in his arms, Steve Rogers follows a thin trail of clues through the Madripoor underground . He eventually ends up at an isolated beach house where he encounters Erskine's wife, who exactly resembles Roger's first lost love (Cynthia Glass) and finally discovers the mastermind behind the plot, Machinesmith. The second issue in this series remains strong, but not quite as strong as the first. Once again, we see Steve Rogers in super-spy mode as he beats his way through the Madripoor underworld following clues, stakes out Erskine's wife, and recon's her hideaway. I really like seeing Steve Rogers in a Espionage role. . .unfortunately, things get a bit weak at the end when he finally puts the pieces together and discovers that Anita Erskine is a super-realistic android created by Machinesmith. . .who traps Rogers and uses a ray to de-activate his Super Soldier serum. In other words, the story takes a turn from super-spy action into typical comic book fare. A bit disappointing.Overall, this issue is very strong until the ending, with fantastic art and Captain America in James Bond mode. Unfortunately, the weak ending doesn't really make me want to jump into the next issue. 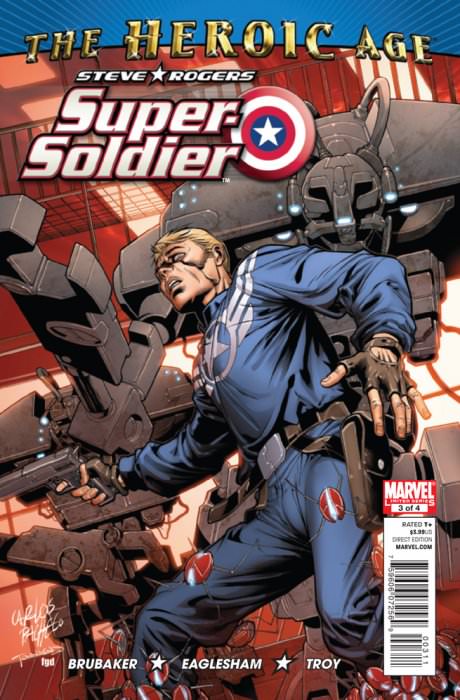 After his Super-Soldier serum has been neutralized by Machinesmith, Steve Rogers fights his way out of captivity and with the help of the android Anita Erskine, regains his power and sets out to stop the auction of the new Super-Soldier formula. This third issue slumps a bit compared to the previous two. I was liking the "James Bond Captain America" style that the first two issues established. . .this issue is full of supervillain monologues and posturing from Machinesmith. . .typical superhero stuff.And then there's the ridiculous notion that Machinesmith was able to create such a perfect replica of a human being (Anita Erskine) based on only an old photograph of Captain America and Cynthia Glass from WWII that she/it was able to fool Captain America AND her husband, Jacob Erskine.I'm not trying to be indelicate here, but. . .one would THINK that a man would notice something strange if he was bangin' a robot! I mean. . .there's a lot of intimate details to consider when constructing the various sexy areas of an android, I would guess. AHEM. . .moving along!ANYWAY. . .The art remains extremely solid and there are some nice story moments where Steve reveals that just because he isn't super strong, that doesn't mean he forgot how to do some sweet KARATE! But this issue is the weakest so far. I'm a bit concerned that after a strong start, this isn't going to end well. 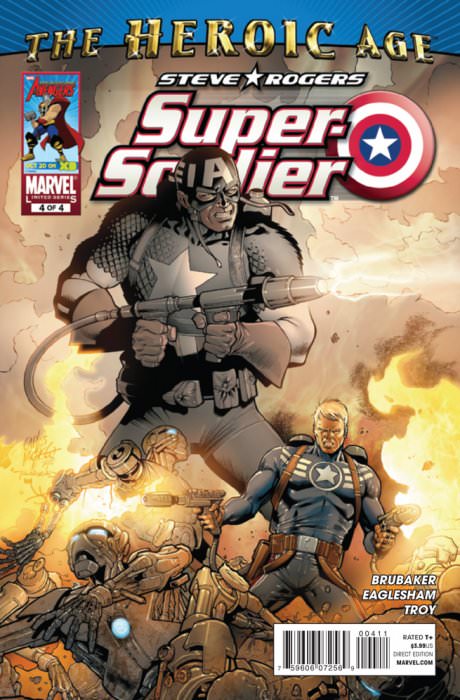 Steve Rogers enlists the aid of Hank "Beast" McCoy and the android Anita Erskine to defeat Machinesmith before he can auction off the new Super-Soldier formula. . .but after the battle, he discovers that the whole thing was a ruse serving a higher conspiracy. Here we are at the big finish! Lots of robot punching, explosions, and heroic posing.It ties up the story at hand nicely. . .the good guys win, of course. Unfortunately, the ending is more of a "to be continued" than a 'The End".It's revealed in a short epilogue that Jacob Erskine wasn't actually killed, and is working for the Shadow Council. Making the whole story somewhat pointless, and in the words of Steve Rogers, "What was this mission all about, then?"Obviously, it was all about setting up another story. . .which is fine, but this storyline was never resolved anywhere, which defeats the whole purpose of this mini.Overall, a pretty weak ending with a lot of robot punching and a dangling end that was never resolved. Disappointing after such a strong beginning.

I have mixed feelings about this one.  On the one hand, we get Captain America in an unusual super-spy role.  On the other, we have an unresolved storyline and robot punching.

Overall, I'd have to say that this was a valiant effort on the part of Marvel to try and do something different with Captain America, but this wasn't the Captain America the fans wanted, so we have a strange little relic. . .an obiously unfinished piece of work that just sort of lurks forgotten in bargain bins.

It's really not a bad little piece of Longbox Junk.  Give it a read if you want to see a bit of a different take on Captain America backed up by some great art.  If Marvel just had a LITTLE more spine and stuck with it, this could have been really good.

Travel back to 1983 with me and take a look at Marvel's The Falcon 4 issue mini.

It's a gritty tale of the streets, jive turkey!