Lobo is one of those characters I really like. . .but only in small doses.

Some of my favorite mini's and one shots of my entire collection are Lobo.  With a great creative team and done right, Lobo is one of the most hilarious characters out there.  Unfortunately, the character never really seemed able to sustain a regular series.  I guess it's hard to keep the right level of comedy and brutality going long term.

The series at hand is NOT Lobo as you might know him.  It's a highly-controversial reboot of the character done during DC's New 52 days that seems to be pretty much hated by. . .well. . .everyone.

Almost every existing review I could find on this series is negative in some way.  It seems that the Lobo revamp pretty much exploded many a head of comic fans with rage.

Which brings us to Longbox Junk.

I found this whole series on the cheap (13 issues plus the annual for 10 lousy dollars!) and decided to see for myself if it was REALLY as bad as people make it seem. . .or if it was a bandwagon hate situation where people wanted the Lobo they knew and would automatically hate anything else. 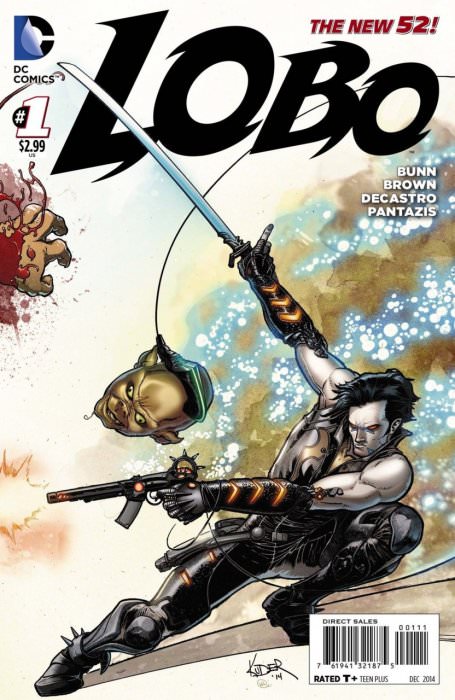 Former Royal Bodyguard turned Bounty Hunter Lobo takes on a seemingly-impossible contract to find and take down 8 assassins in 8 days before they take out their target. . .the planet Earth. Not a bad first issue at all. It nicely sets up a fairly simple storyline. . .8 targets, 8 days. . .and gives a bit of background via flashback to Lobo's previous life as a cultured Imperial Bodyguard. We also get to see where Lobo is now as he takes down his first target. . .a ruthless and cold bounty hunter that doesn't much resemble the caring man he was before.The art is slick, sharp, and somewhat cartoony (in a good way) for the main parts of the story, sketchy and more pastel colored for the flashbacks. All of it is very nicely done, with the sharper main art being perfect for the hard sci-fi bounty hunting action.Overall, I was impressed with this first issue. I've heard a lot of bad about this series, but I can't really say anything bad about this issue. If I HAD to find something disappointing, it would be wanting to know more about how Lobo got from the Imperial Palace to becoming a sort of science fiction Jonah Hex. . .but hopefully that will be in issues to come. As far as THIS issue goes, it's a winner! 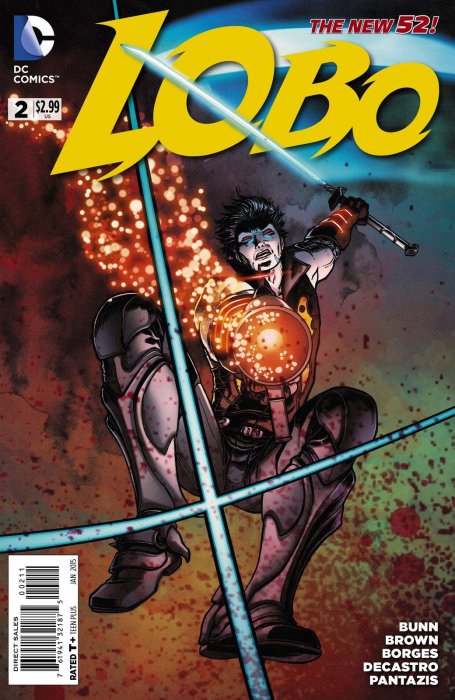 Lobo is forced by his employer to team up with 3 other "specialists". The unwelcome alliance is put to the test as Lobo takes down a murderous cyborg that unleashes a biological weapon on Shanghai. . . A second strong issue as Lobo takes on some supporting characters. . .Luna, a sharpshooter. Emily, a 14 year old hacker. And Rave, a mysterious guy who hasn't revealed his "specialty" yet.I like the mix of characters and am definitely getting a "Sci-Fi Jonah Hex" feel from this issue even more than the previous one as Lobo reluctantly teams up and lets his team know he hates them all, even though they prove useful during the mission.The art also remains strong, with the main story parts benefitting from a clean, sharp style and the flashback rendered in a more finely-lined and less heavily inked way that really stands out.All in all, this issue continues to be a pretty strong hard sci-fi story by way of Jonah Hex western. The only thing I didn't really like about it was that the biological weapon Hex. . .er. . .Lobo. . .didn't stop caused a small zombie apocalypse, so we got some zombies for no reason other than. . .zombies.  Also, there's no real explanation as to WHY Lobo's employer decided to team him up, other than wanting to have some supporting characters.  Other than those two small things, this issue is another winner! 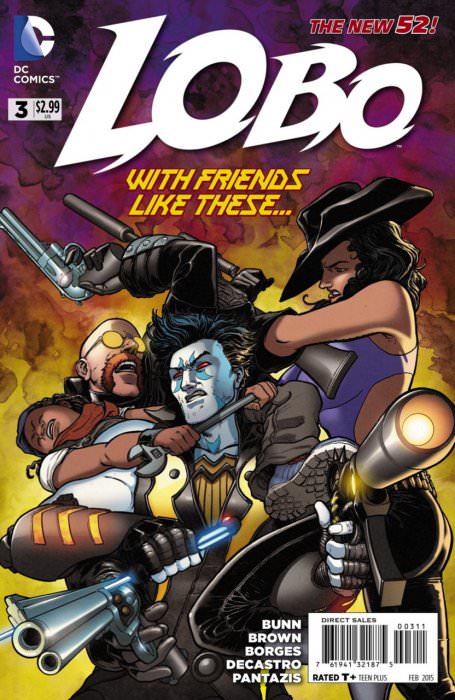 Lobo continues to bond with his new "team" as they work together to take down a target who can shift in and out of reality. Afterwards, they track their next target to Metropolis. . .home of Superman. Although this issue is still pretty strong, the story is starting to slip away from "Sci-Fi Jonah Hex" and toward more superhero comic book fare. What I first thought was a pretty simple setup (8 targets. . .8 days) is beginning to show its weakness as a bit of "Villain of The Month" creeps in. That's not to say the issue is bad, it's just that this particular target is a bit weak and cliche. Fortunately, the flashback storyline showing Lobo as an Imperial Bodyguard on his homeworld beginning to realize something is very wrong with the Emperor he is sworn to protect remains very interesting. I have to say that the flashbacks are probably more interesting than the main story, and would like to see more of it than the usual 2 pages worth per issue.Overall, despite the weakening main storyline, this issue was still good. I'm still really liking the "Sci Fi Jonah Hex" style of it and the flashback scenes are a great addition. 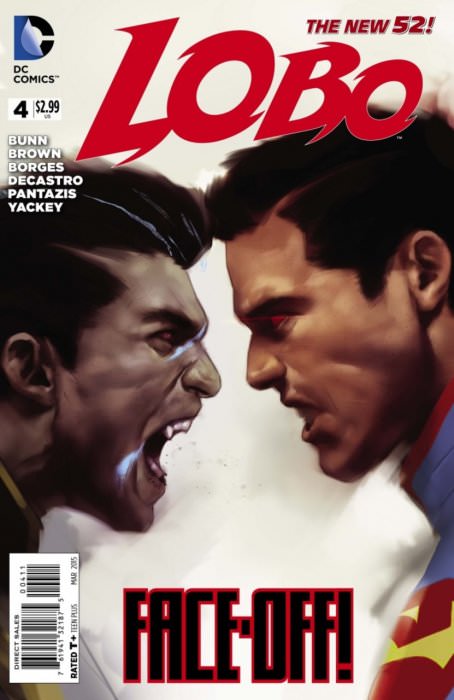 Lobo and his team track their next target to Metropolis. Unfortunately, Superman has no intention of letting a ruthless bounty hunter work in his town. . . DC didn't wait long before trying to throw in a crossover issue. Too bad this one doesn't really work out.The whole issue feels unnecessary. . .a crossover for a crossover's sake. It definitely feels forced. Thankfully, the flashback scenes showing Lobo's homeworld falling apart around him save the issue.Overall, this issue feels out of place. It doesn't help that this is probably one of the worst renderings of Superman I've seen. The art is fine when it comes to Lobo and the other original characters, but Superman is just bad. If you're gonna try to lure readers by crossing over a more popular character, at least put some effort into it. 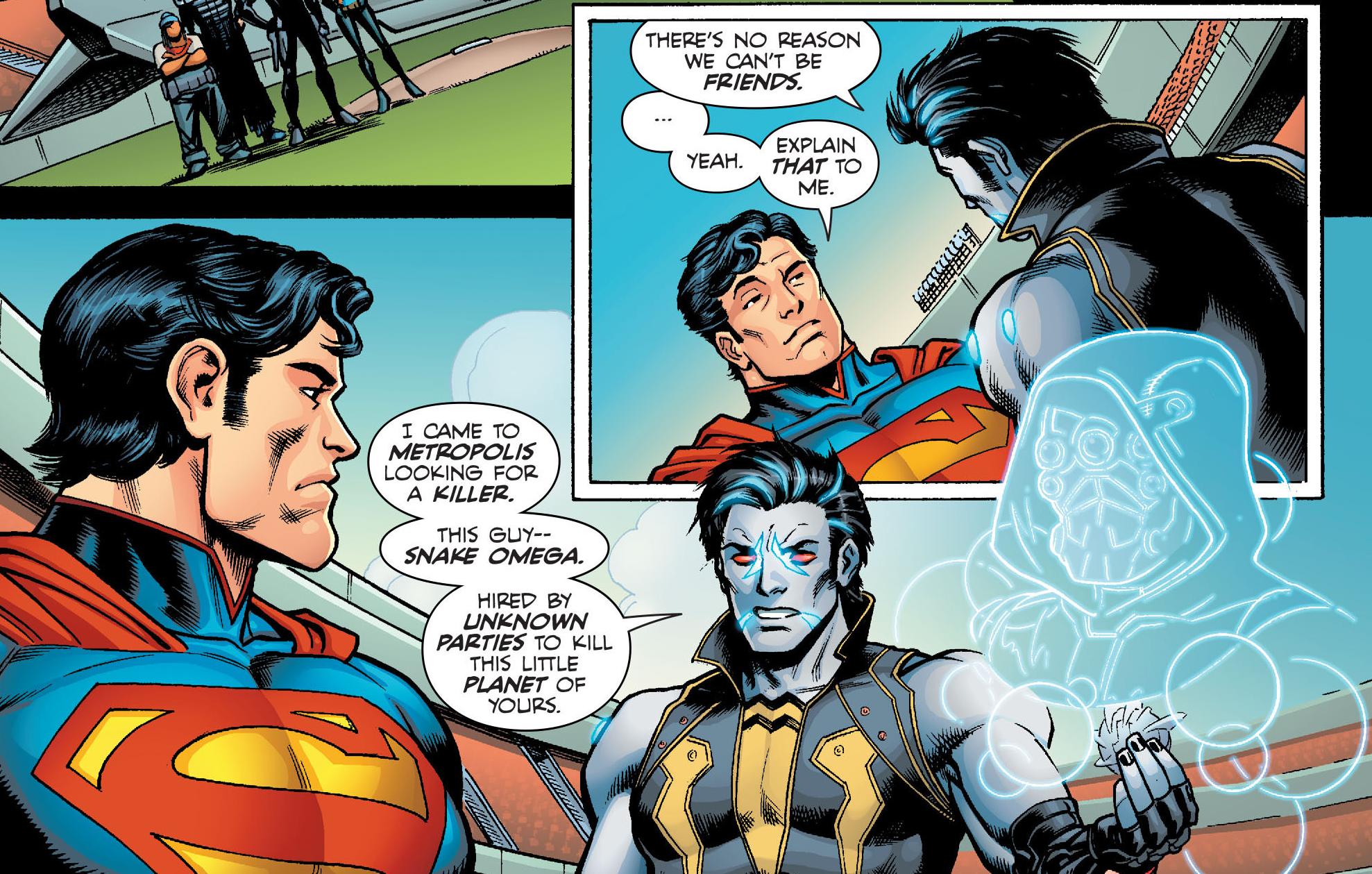 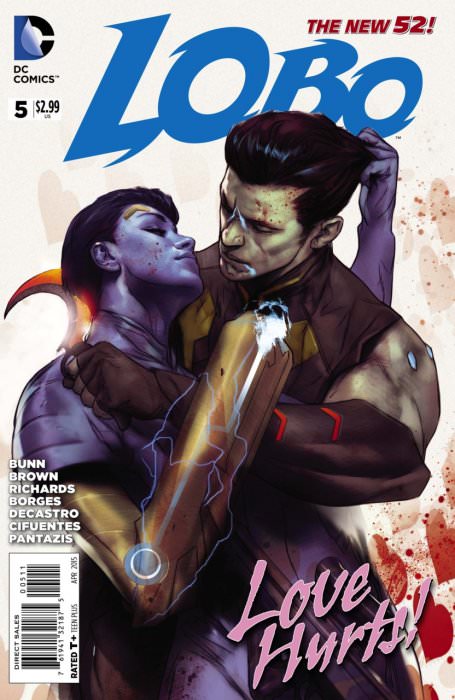 Lobo's next target turns out to be his biggest challenge yet. . .a Xrexian who, like Lobo, is the last of her kind and descended from his people, just as deadly and skilled as he is and claiming to know the secret behind the destruction of Lobo's homeworld. After last issue's extremely underwhelming Superman crossover, this issue returns to form with a pretty strong entry concerning the last survivor of a related race inhabiting a planet nearby Czarnia (Lobo's Homeworld) that was caught in the cataclysm when Czarnia was destroyed.He sees her as nothing but a target to be taken down, she sees Lobo as a chance to resurrect their race, and teases him with the possibility of learning what was actually behind the destruction of his planet. . .which he blames himself for.Overall, I liked the meaty chunk of story this issue contained. . .especially when compared to the weak Superman cash in crossover issue just before it.   One of the best covers of the series so far as well. 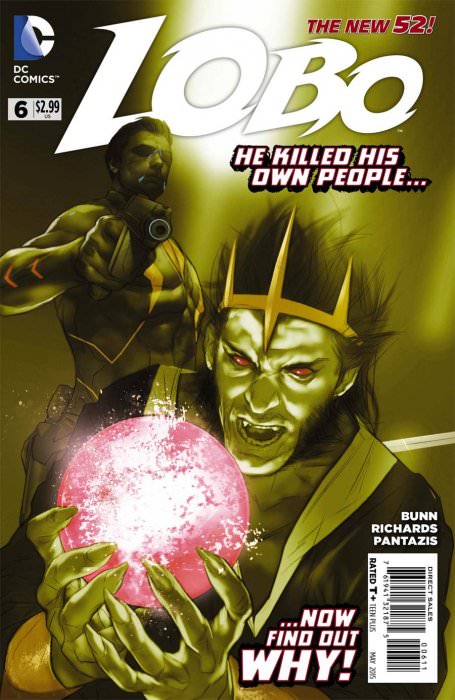 In the finish to the first Lobo story arc, Lobo's team is decimated during a final confrontation with The Pariah. And so we come to the end of the initial "8 days, 8 kills" storyline. Lobo's team (except Emily, the teenage hacker) are brutally killed by The Pariah, but he manages to defeat her and bring the contract to a close.  Too bad I found it hard to care about the demise of his team.  They had been barely fleshed out at all.  Luna was a sexy sharpshooter in a cowboy hat who I assume was there to fill a missing quota, and Rave was just a guy who double-fisted revolvers and looked cool in a trenchcoat.  RIP. . .I guess.Most of the issue was the battle between Lobo and Pariah, but a good chunk of it was flashbacks to the ultimate destruction of Lobo's homeworld after Lobo killed the Emperor, who had gone insane and whose life force was tied up with that of the planet itself. In trying to save the planet, Lobo was ultimately responsible for destroying it.But during the battle with Pariah, she revealed that she had been hired to poison the Emperor and drive him insane. . .but she dies before she can reveal who hired her. . .thus setting up the next stage of the story as Lobo sets out to find out who it was.Overall, I really liked this issue and thought it was a great conclusion to the first story arc. There was an artist change in this issue as well. The usual sharp, somewhat cartoony art was replaced by one of the artists who had been doing the flashbacks. His thinner-lined, more angular art style was very well suited for the dark nature of this issue and was an unexpectedly welcome change. 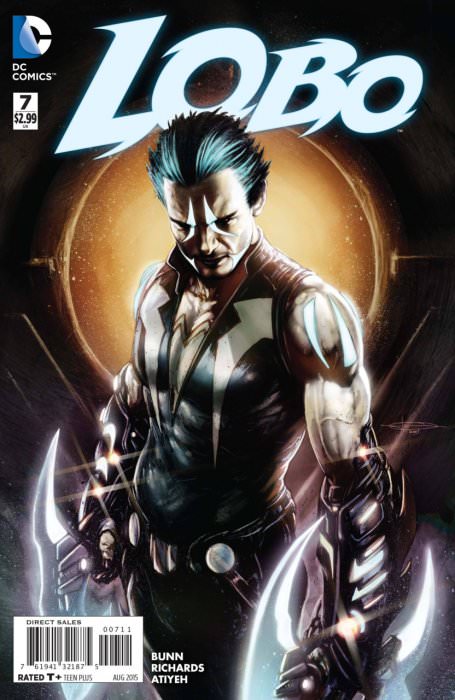 Lobo strikes a deal with Kadra, the leader of the Void Whisper assassin's guild. He'll work as her head Enforcer in exchange for information leading to who hired her assassins to destroy Earth and Czarnia. The first issue of the next Lobo story arc is a strong entry that digs into the dirty underbelly of crime and contract killing. I liked the return to the "Sci-Fi Jonah Hex" style that had been left a bit to the wayside as the last arc finished up.   Unfortunately, it looks like along with this new direction the flashbacks to Lobo's previous life are gone. . .but on the good side, the artist of those flashbacks is illustrating the main story now and it lends a whole new, grittier look and feel to the story.Overall, a strong start to the new arc, with a grittier feel to both story and art.

Coming into this series cold, with very little knowledge of the character other than he existed and it seems everyone hates him (I never saw an issue of this on the stands of my local comic shop when the New 52 was rolling and didn't read any of the series it crossed over with), I found myself pleasantly surprised to find myself liking it.

Is it perfect? No.  Is it great? No.  It's not close to being perfect OR great.  But to me, it IS good and doesn't deserve the hate that it got.  What it actually reminded me of a lot was Jonah Hex. . .but with a hard Sci-Fi twist that Jonah Hex's future adventures in HEX never quite pulled off.

Let's address the elephant in the room here.  No. . .it's NOT Lobo by any means.  It's played pretty straight, with hardly any humor.  It's a violent sci-fi western story with a tragic anti-hero.  I think that DC made a mistake in trying to hang this series and this character on the Lobo hook.  As its own thing, it MIGHT have lasted longer than 13 issues and not gotten the practically universal comic fan hate I see when I read anything about this series.

Overall, I say put aside comparisons to the original Lobo and knee-jerk reaction to unwanted character reboots and give this series a chance on its own as a decent sci-fi western story and some pretty good Longbox Junk.

The back half of New 52 Lobo. . .where it all goes TERRIBLY wrong as DC tries to figure out how to backpedal away from the discontent over the questionable decision to reboot Lobo as an entirely new character.