Retro Reviews Tarzan of The Apes #186

Welcome back to another "Retro Review" edition of Longbox Junk, where I take a look at some of the older single issue comics in my collection and give the internet a review that NOBODY ever asked for!  Why? Because that's what I DO, son! So let's do it! 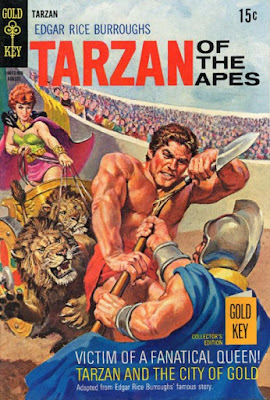 So what we have here before us is the first part of a two issue adaptation of Edgar Rice Burrough's "Tarzan and The City of Gold", brought to us by Gold Key comics in the wonderfully politically incorrect year of 1969, in that long gone era of comics where a series could actually get up to triple digit issues before getting a reboot for that sweet, sweet #1 collectors issue (with 18 variant covers, of course).  But enough about TODAY'S comic book comedy.  Let's dig on into the Longbox Junk at hand.

Just to get this out at the start. . .I've read a few of the original Tarzan books, but I've never read Tarzan and the City of Gold, so I'm coming into this one cold.  This is also the only issue of this series I have, so I don't know what came immediately before, or how the story ends.  It's this and just this.

Let's start at the front of things with the cover.  Of all the older comics in my collection, I have to say that (in my extremely humble opinion) Gold Key really has consistently the BEST covers.

Now, I don't have a LOT of Gold Key comics, but I have about 30 or 40 of them and they pretty much beat Marvel and DC covers of the past hands down.  The cover to this issue is no exception.  It's dynamic, colorful, and very nicely done. The rich blue of the soldier's cape is a real eye-catcher.

Tarzan rescues a stranger from bandits, as Tarzan does.  The stranger's name is Valthor and not only is he wearing some pretty inappropriate jungle garb (a shiny white suit of ivory scale mail) but he's also hopelessly lost.  Tarzan offers to guide him back home, because Tarzan is a solid guy.

After a couple of days travel, they come in sight of "The Fire Mountain Xarator",  a giant, smoking, active volcano. . .which one would think would be visible from quite a distance, making Valthor seem even more of an idiot when he could have just told Tarzan two days before, "I live by that giant volcano that you can see the plume of smoke from over there in that direction.  See it?" instead of making Tarzan track his way through the jungle. . .BUT I DIGRESS!

At the base of the volcano is a huge walled city named Cathne (the titular City of Gold).  And excuse me for digressing AGAIN, but one would think that Tarzan would be well aware of a big city at the base of a smoking volcano two days hike from his home.

Valthor tells Tarzan that his home is another day's hike past Cathne in the city of Athne, and that Cathne and Athne are enemies.  So Tarzan decides to hike another day, because Tarzan doesn't mind hiking through the jungle.  It's sort of his thang.

As they attempt to cross a river under the cover of darkness, Tarzan and Valthor become separated when the river (which has become flooded because it's been raining all day) gets crazy.  Tarzan washes up by the Cathne city wall and Valthor is nowhere to be found, so Tarzan says "Screw it. . .I'm gonna check out the City of Gold while I'm here."

So he jumps the wall, only to immediately be captured.  And when I say immediately, I mean Tarzan was only about 6 feet from the wall when he gets busted.  He literally only took about 4 steps.  The City of Gold has some pretty stout security, but one would THINK the Lord of The Jungle would be just a bit sneakier. . .just saying.

Tarzan gets tossed into a cell with a bruiser named Phobeg. . .a former Imperial Guard who accidentally stepped on a lion's tail. . .who let's Tarzan know that they will probably be killing each other in an arena fight pretty soon.

In the morning, they are brought before the Queen. . .Nemone. . .a sultry beauty with a hilariously 60's giant bright red beehive hairdo.  She proves Phobeg right by condemning the two prisoners to a fight to the death for her amusement in the arena.

And so after a merry day of chariot racing, Tarzan and Phobeg are brought out for the main event, and Tarzan easily kicks Phobeg's , because Tarzan is the kind of man whose will NOT be kicked.  But then he refuses to kill Phobeg despite Nemone's demands. . .which makes her hot for Tarzan, because that's the effect Tarzan has on women when he tells them they can take their demands and stuff 'em because he's no slave. . .he's friggin' TARZAN!

And so Tarzan is brought to the palace to. . .er. . .amuse. . .Nemone.  He's escorted by a chubby palace guard named Erot who keeps telling Tarzan how scared he should be, and Tarzan is like, "Why?"  It culminates hilariously when Erot tells Tarzan that stronger men then him have trembled before the queen and Tarzan is like, "Tremble?  What's that?" (A literal quote from the comic).

Erot gets thrown out of the royal chambers as soon as he brings in Tarzan and Tarzan can tell he's made an enemy, but Tarzan doesn't really care because Erot's just gonna have to wait in a long line for a piece of him because Tarzan collects enemies like I collect comic books. . .

So Nemone gets Tarzan on the bed and starts getting frisky with him, telling him that she'll let him live, but only if he stays in Cathne with her forever. . .because that's how Tarzan makes women feel.  They are interrupted before Tarzan can give Nemone an answer by the news that they've captured an intruder and they're going to feed him to a lion if Nemone and Tarzan want to come watch.  Nemone just LOVES a good lion execution, so she decides bedtime fun with Tarzan can wait a bit.

At the execution, Tarzan sees it's Valthor who's getting fed to the lion.  Tarzan jumps in to save him, because of course he does.  He kills the lion with a little knife and gives Nemone his best Tarzan victory yell.  Valthor tells Tarzan he came back to see what happened after they got separated in the river and got captured by Cathne's outstanding security team.

Tarzan tells Valthar to shut the up before someone figures out they know each other, then demands that Nemone frees Valthor. . .because queen or no queen, once Tarzan gets into a woman's head, TARZAN makes the demands.

Nemone frees Valthor, then tells Tarzan it's time to come back into her chambers.  End of issue. . .To be continued.

There's a pretty big suspension of disbelief necessary for the enjoyment of this story.  It starts out with the fact that Valthor can't find his way home despite there being a giant smoking beacon to lead the way.  Then Tarzan has no knowledge of the huge walled city and smoking volcano TWO DAYS away from his home.

And then there's the way that there's not a single black person IN THE AFRICAN JUNGLE! Athne is a Roman-style city in the middle of Africa and the population is whiter than Salt Lake City in 1850.  Okay, I get it. . .1969.  But still. . .IT'S FRIGGIN' AFRICA!

Other than the extreme suspension of disbelief needed to get through this story, it's not bad.  It moves at a pretty brisk pace and it's well-written.  I wish I had the second part of it, so the fact that it left me wanting to read more says something right there.

Let's talk about the art for a moment.  I found the art to be a bit uneven.  It starts off great. . .dark and thickly-inked, but not murky.  A great sense of depth and shadow.  And then about page 10 it looks like they swapped out inkers and the lines become a lot thinner, giving the back half of the story a weaker look than the front.  The pencils are still really good, but the change in inker drags them down quite a bit.

The colors are surprisingly good in this book as well.  I've found in a lot of these older comics that the coloring is pretty sloppy, but on this one at least, I have no complaints about the color art.  Generally speaking, the art in this issue was pretty good from end to end. . .

Like I said above, I get it. . .this comic was created in 1969.  But did they REALLY have to give Tarzan an Elvis pompadour and sideburns?  And I've got to ask the same question about Tarzan that I had to ask about Tor in a previous Retro Review:  Just how the does he get that clean shave?  Tarzan has a shave that would put a Marine to shame.  And I ain't just talking about his face.  The Lord of The Jungle is "dolphin smooth" as the Walking Dead's Abraham (R.I.P.) put it so well.

Overall, I liked this issue.  It has a great cover, good art for the most part, and a nice brisk story.  Sure there are some issues here and there, but in this case the good outweighs the bad.  Is it the best comic I've ever read?  No.  Is it the worst? Not even close.  It's pretty good. . .and what more can you ask from Longbox Junk?

Back to Longbox Junk business as usual as we take a look at the Lobo nobody asked for. . .I'm talkin' bout New 52 Lobo!  Be there or be square!