I wasn't really that impressed with the first Batman/Alien crossover.  It had its moments, but overall it was average at best, with cardboard cutout disposable 80's action movie cliche characters and art that was half and half. . .good on monsters and backgrounds, bad on human characters.

There seems to have been enough people who liked the first one to merit Dark Horse and DC getting back together a few years later for a sequel.  Is it any better?  Let's take a look and find out! 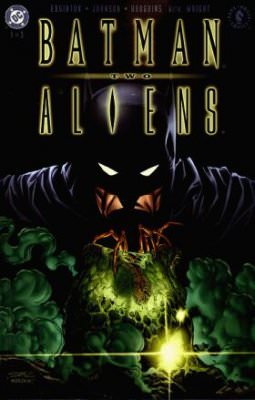 When a sealed laboratory that has been hidden beneath Gotham for 70 years is opened, an alien horror is unleashed on the city. . .and only Batman realizes the danger everyone is in. The first issue of this series is already off to a better start than the original series by placing the action squarely in Batman's home turf, the gritty streets and alleys of Gotham City. I also really like that we get to see Batman as detective in this issue instead of an Arnold Schwarzenegger action hero stand-in as Bats was portrayed in the first series. Sure, there's plenty of action toward the end of the issue as Batman confronts a pair of Aliens in a forgotten subway tunnel, but the buildup to that battle has some REALLY good Batman and Jim Gordon character moments, as well as some very Lovecraftian storytelling in the introduction (a doomed Antarctic expedition in 1928) and a flashback toward the middle (where Batman reads the journal of the sole survivor of the expedition).The art here really stands out as well. It's highly-detailed and crisp, and to tell the truth. . .I like it a lot better than Bernie Wrightson's art in the first series, especially when it comes to the ridiculously-detailed Aliens. Not saying BW's art was bad, but as I said in my review of that series, it was definitely not his best work. Staz Johnson knocks it out of the park here. 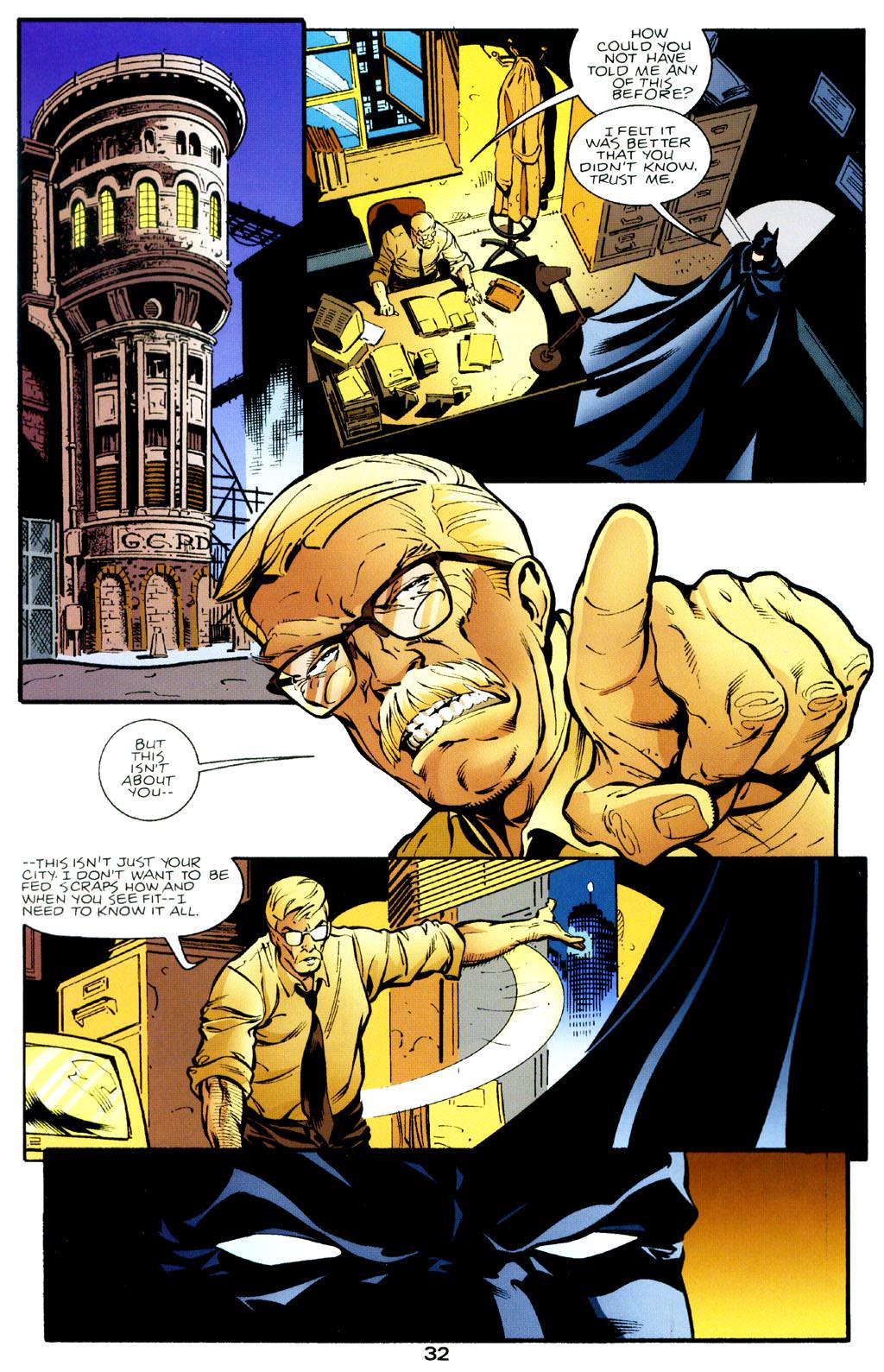 Overall, I liked this first issue a LOT more than I did the original series. Batman is in his proper element, there's some great writing, and the art is fantastic. It's a winner! 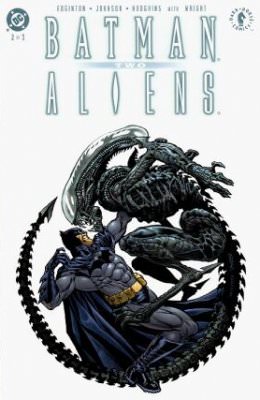 After surgically removing 3 Alien embryos from their victims, Batman is prevented from destroying the creatures by a mysterious government agent.The embryos and the original Alien escape into the city after a massive battle, But Batman enlists the aid of Oracle to track them to Arkham Asylum.During the battle to destroy the now-grown Aliens, Batman is taken prisoner by the Government Agent. . .who isn't exactly who she seems to be.There's a lot more action in this issue as Batman goes from fighting two adult Aliens to 4 of them. He's forced to strap on some Bat Armor and use Mr. Freeze's Cold Gun just to hold his own, and even then he only survives because of an unexpected team-up with Two-Face. I liked the cameo of Oracle (one of my favorite characters of the time) and Jim Gordon was an utter badass in a way that we haven't seen him in a while. There was also a very nice nightmare scene. . .but other than those few moments, story fell by the wayside as the action ramps up.That's not to say the issue was bad by any means. It was actually really good. The storytelling and character moments faded to the background in a natural way so I didn't mind the switch from detective mode to action mode at all.The art also remains extremely strong, with a fantastic double page spread of the Aliens attacking Arkham that has so much detail in the creatures that it's almost overwhelming!

Check it out. . .but you REALLY need to see it on the actual page! 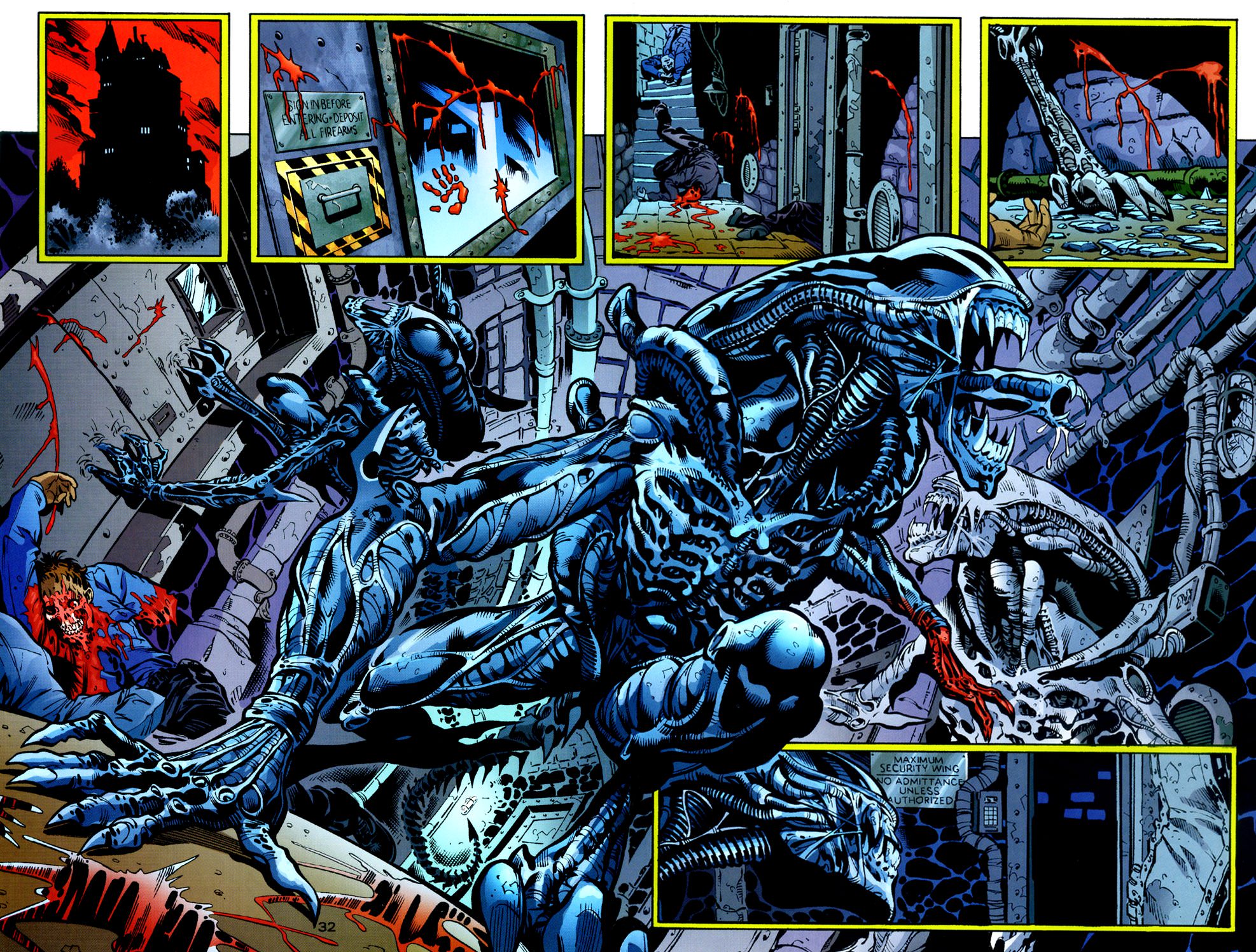 BUT. . .We also get the obligatory Alien Franchise cliche "We can't kill the Aliens. . .we have to study them." character, and it's never really made clear as to WHY the Aliens decided to attack Arkham, except (as I suspect) to throw in some cool villain cameos. Overall, this is a good, strong issue. There's a few questionable story moments, but not enough to bring it down more than half a notch. 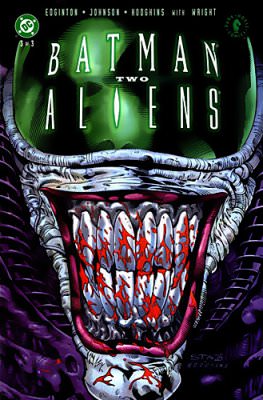 Batman is forced to fight his way through a testing ground for human/Alien hybrid soldiers infused with the DNA of Arkham Asylum's worst villains!WhatTheF*CK?!After two really good issues, the finale not only goes off the rails but flies over the cliff AND rolls down to the bottom of the hill in a flaming, twisted mess of unrecognizable wreckage.It's bad. It's real bad. How the flapping f*ck did this happen?So Batman is trapped on a supervillain base that's an abandoned oil rig with talking, gun-toting creatures that are human soldier volunteers enhanced with Alien DNA and that of Batman villains like the Joker. Yeah. . .there's a friggin' Joker Alien with a giant cheesy grin.  And a Mr. Freeze Alien, and a Two-Face Alien, and a Scarecrow Alien, and a Poison Ivy Alien.  Talking Aliens.  With guns.. . .it's so bad. 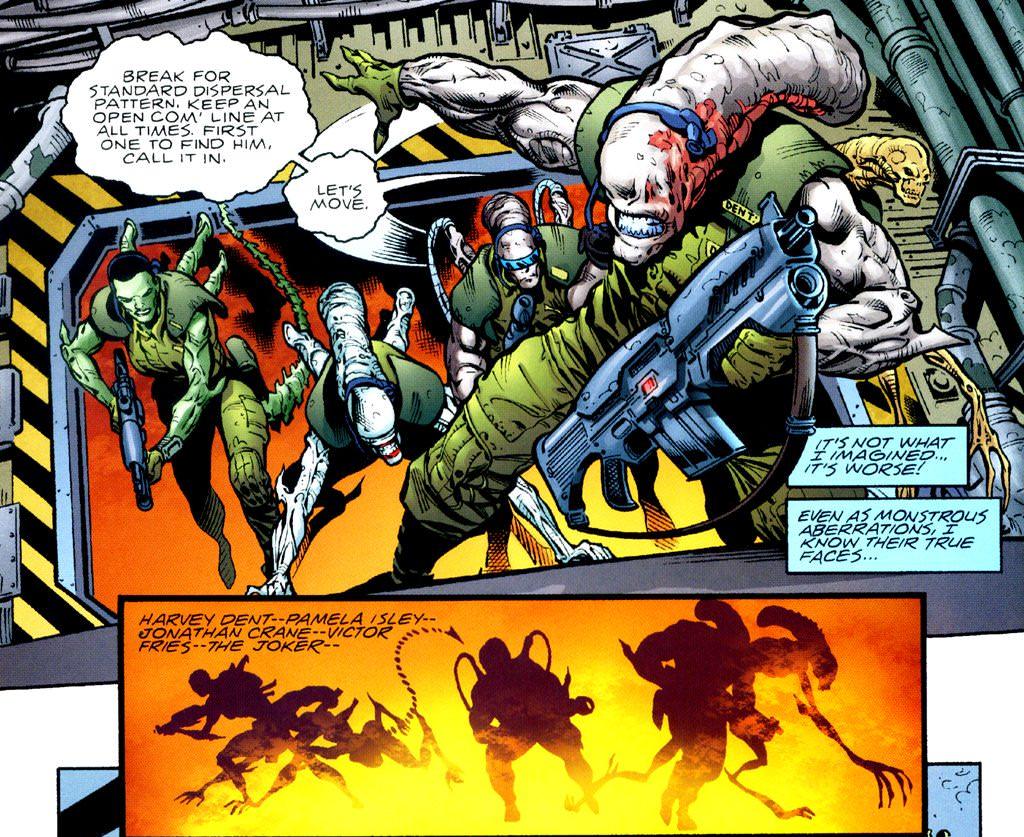 The worst part of it is that the art is still REALLY good! Somehow, against all odds, Staz Johnson manages to bring this horrible idea to detailed life. . .his depiction of the giant Killer Croc Alien is awesome! 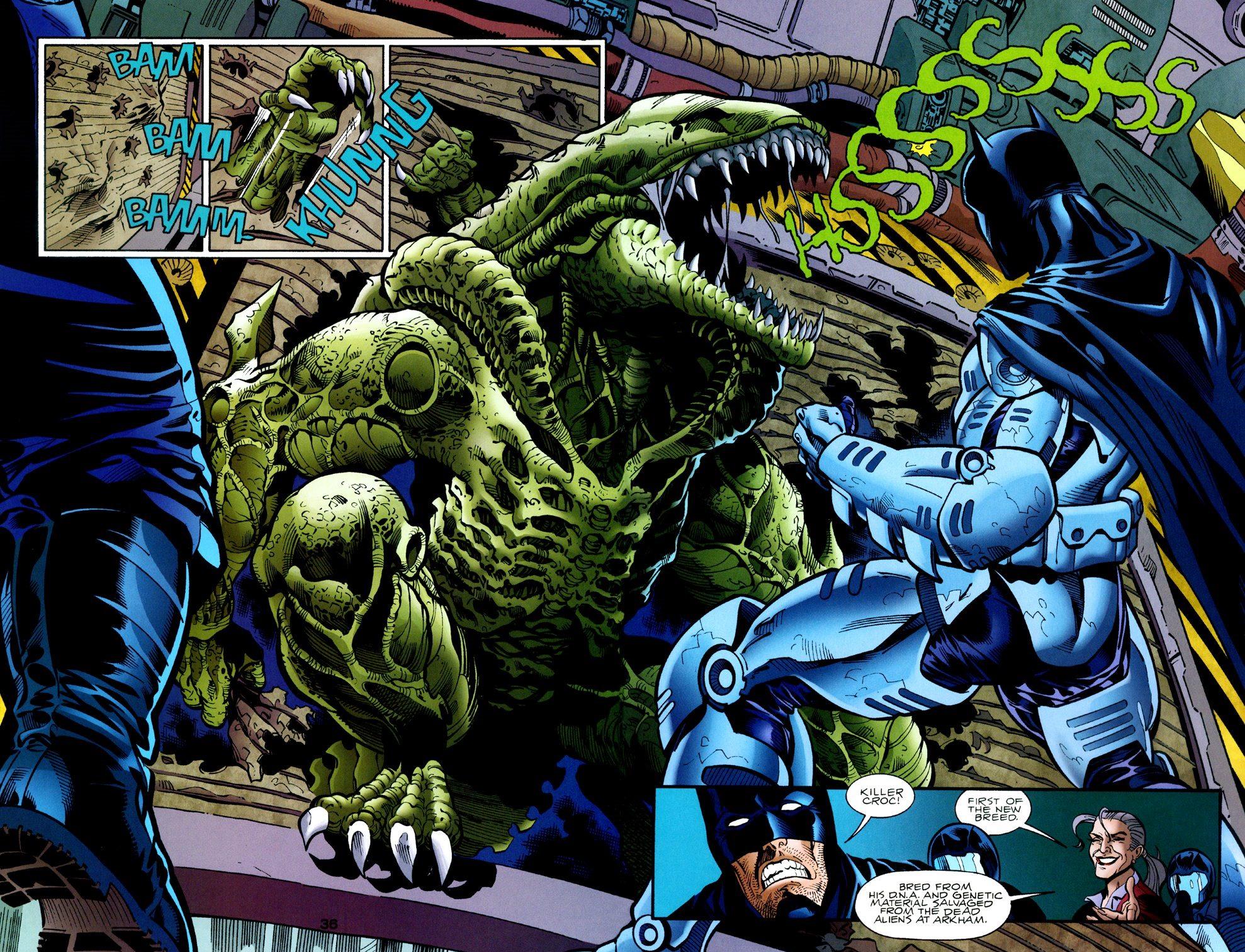 But the very idea that his art brings to life is so bad, so ridiculous, that it's almost unreadable. After the quality of the first two issues, I find it hard to believe that this isn't some kind of strange joke. . .Overall, except for the art, this issue has no business actually existing. It is a terrible end to what WAS a pretty good story. And speaking of the end, it's so abrupt that it's almost insulting. My , what happened here? This is really one of the worst comics I've read in a long time.

This is a series that has a definite curve.  It starts high and ends up REALLY low.

The first issue is really good in just about every way that it can be.  Batman in detective mode butting heads with Jim Gordon in Gotham City over how to handle deadly aliens stalking the subway tunnels.  The second issue cranks up the action as the Aliens begin openly attacking and Batman pursues them, desperately trying to end the carnage before it gets out of control.

But then the third issue jumps the rails and goes over the cliff when it pits Batman against talking, gun-toting Alien/Human hybrid soldiers infused with the DNA of Batman's Rogues Gallery characters like the Joker and Poison Ivy aboard a secret oil platform supervillain lair.

The first two issues (especially the first) are everything I want in a good Batman story.  The last issue is everything wrong with Batman.  I don't understand how this story can be so good and so BAD at the same time!

Overall, I find myself in a strange place when it comes to suggesting this story or not.  All I can really say is that the first issue is gold, the second silver, and the third .  This story having such a bad ending has to be one of the most disappointing feelings I've had about a comic book in quite a while.

Nobody liked him. Everybody hated him.  He wasn't ANYBODY'S Main Man.

But was it really THAT bad?  Let's find out!