As I've stated before on this blog, I LOVE the Aliens franchise.  One of my favorite movies is the much-hated Alien 3.  You know anyone who publicly confesses a love for Alien 3 without a single bit of shame is a true Alien fan.

When it comes to DC comics, Batman is pretty much my favorite character of them all.  I have 36 longboxes in my comic collection.  5 of them are nothing but Batman comics.  I have more Batman comics in my collection than a lot of people have in their TOTAL collection.

A Batman and Aliens crossover would seem to be a win/win for me. . .right?  Let's find out! 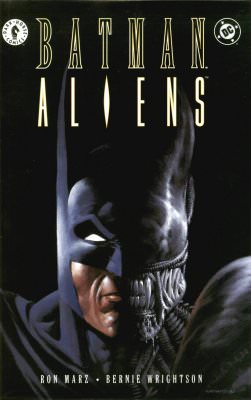 Batman encounters a government special ops squad while deep in the Jungle on a mission to find a missing Waynetech scientist. After they reluctantly join forces, they discover a crashed alien ship and are attacked by deadly creatures. Basically what we have here is a fairly large pile of 80's action movie cheese by way of 90's comics. That's not entirely a bad thing if you come into it knowing what to expect. . .the 90's comic version of a borderline bad 80's action movie guest-starring Batman for no good reason.The special ops group are totally 80's cliche characters, each defined by a single character trait. . .there's the bully who gets in everybody's face, the tough woman out to prove herself in a man's world, the jumpy guy who didn't sign up for this , the religious guy who knows they're all gonna die. . .and Batman in grumpy "I work alone, stay out of my way" mode.I'm not a big fan of stories where Batman is out of his dark urban element. . . and it seems the writer is aware that Bats is the odd man out because he references it several times. . .this story is no exception. Batman feels like he doesn't belong at all and doesn't really serve a purpose on the cliche squad except to be Batman.The story is extremely thin and the dialogue is typical gung-ho action movie. Some of Batman's inner monologue is pretty good, especially on the first page.So let's talk about the art. Bernie Wrightson is a true comics legend, especially in the field of horror. Unfortunately, this is NOT some of his best work. That's not to say it's bad by any means. . .there are scattered panels that really shine, the backgrounds are very nicely done, and once the aliens appear, he does a fantastic job on them. It's just too bad that the same level of care shown to the backgrounds and horrific elements isn't there when it comes to the human characters, including Batman. . .who is drawn in a strange elongated style with a thin neck and extremely long "ears" on his cowl.Overall, this book is half and half with me. The art is awesome in some places and just pretty bad in others. The story is thin. . .basically being a Predator movie with Aliens instead of Predators and Batman instead of Schwarzenegger.  Unfortunately, Batman just doesn't really fit and his reason for being out of Gotham and in the jungle seems like a really weak excuse. 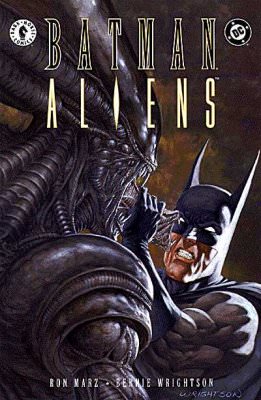 After the aliens decimate the special ops team, Batman and the two remaining survivors make their way through the passages of an ancient temple complex, desperately trying to make their escape. Like the first issue of this crossover, this second issue is pure 80's cheese by way of 90's comics.It's basically an extended chase/fight scene as Batman leads the two remaining members of the special ops cliche squad ("Tough woman out to prove herself in a man's world" and "Jumpy guy who didn't sign up for this ") through an ancient temple, trying to find a way to escape the aliens.At the end of things, we FINALLY get the missing piece of just about every Alien comic Dark Horse ever put out. . ."Tough woman trying to prove herself in a man's world" predictably turns into the villainous cliche "These aliens would make a GREAT weapon and I'll get rich bringing one back" character.And then there's the obligatory "New Alien" in the form of a crocodile hybrid that for some unknown reason is as big as a Mu' Fuggin' Tyrannosaurus Rex! 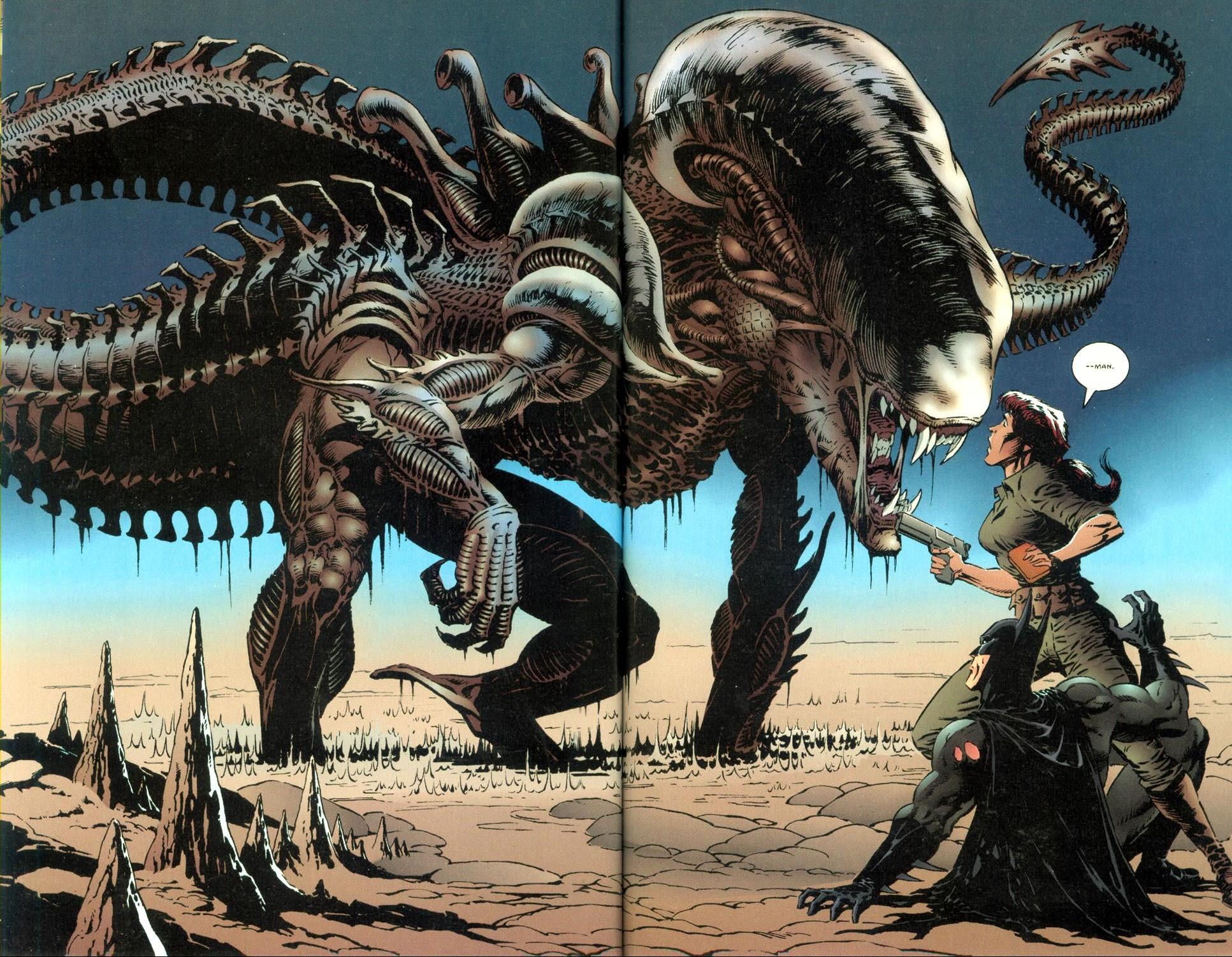 Since there were more monsters and fight scenes in this issue than the first, Wrightson's horror chops have a bit more time to shine. Unfortunately, the great alien moments come at the expense of the human characters, who actually look WORSE than they did in the first issue. . .especially "Tough Women trying to prove herself in a man's world/ These aliens would make a great weapon and I'll get rich bringing one back", who now looks more like "Indian Spirit Warrior who knows everyone is gonna die" from the first Predator movie.It all ends well with Batman "I work alone, stay out of my way" indeed being the lone survivor and destroying all traces of the alien presence.Overall, the story on this second part was even thinner than that of the first issue. The art both improved AND got worse. Honestly speaking, this wasn't a very good Batman story OR Alien story.  It wasn't ALL bad. . .there were some good moments with both the writing and the art, but all in all, this was pretty disappointing.

If I had to describe this crossover in on word, that word would be: Disappointing.

The story is paper-thin and the characters are little more than cardboard cutouts of 80's action movie tropes defined by one character trait each. . .Tough Woman Trying To Prove Herself In A Man's World, Jumpy Guy Who Didn't Sign Up For This , Religious Guy Who Knows They're All Gonna Die, Bulky Bully Who Gets In Everybody's Face, and I Work Alone, Don't Get In My Way.  The story isn't BAD for what's there. . .unfortunately, there's really not much there.

The art by Comic Legend Bernie Wrightson is frankly not his best work.  The aliens and backgrounds are up to his usual horrific standards and are definitely the strong point of this series.  Unfortunately, his human characters (including Batman) aren't very well done at all.

Overall, I'd have to say that unless you are a Super-Fan of Batman, Aliens, or Crossovers you can probably skip this story and not be the worse for it.  It's average at best.

Since this one was only two issues, how about some MORE Batman/Alien fun?

Skipping forward a few years to 2003 and Batman/Aliens II.  Is it better than the first one?

Let's find out! Be there or be square!