When I discovered these issues bundled at my local comic shop for 5 bucks, I had no idea who the Human Bomb was.  I just knew Longbox Junk when I saw it and forked over Mr. Lincoln.  After a bit of research, I discovered a character with a long and illustrious history as a DC C-Lister. . .mostly on a team of heroes known as "Uncle Sam and The Freedom Fighters".

I've seen a few issues of the series here and there, but to be completely honest, DC sort of sucks at patriotic comic heroes.  Except for the Big Blue Boy Scout, who else do they really have?  No. . .when I want a dose of AMERICA, YEAH! I go straight to the original Star Spangled Avenger, Captain F*CKING America.

But I paid 5 good American dollars for these four comics. . .what was I going to do, just let them sit there in a longbox unread?  Let's do this!

MAD, BAD AND DANGEROUS TO KNOW 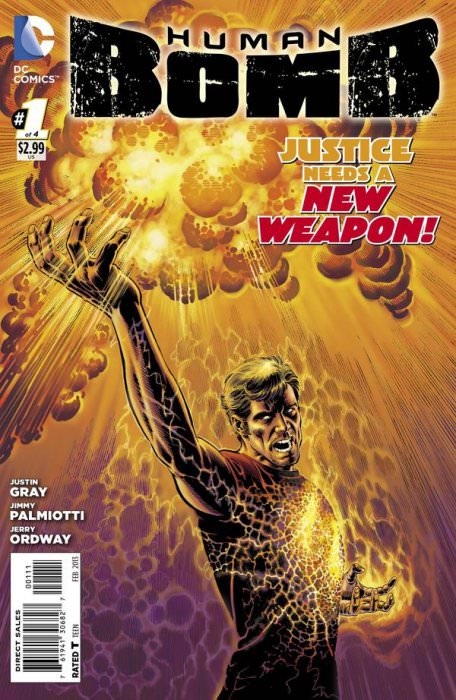 Former Marine turned construction worker Michael Taylor has one of the worst days ever when, after having nightmares about blowing up the White House, suicide bombers start exploding around New York City, including one of the men from his old unit.Taylor somehow contains the explosion, and finds himself pursued by mysterious men in black. During the fight for his life, he discovers that he suddenly has explosive powers. In the meantime, Taylor's running battle through the streets of New York is being observed by the mysterious organization called S.H.A.D.E.So what we have here is the first issue of a series that was SUPPOSED to connect with 3 other New 52 character reboots (Doll Man, Phantom Lady, and The Ray) for a reboot of Uncle Sam and The Freedom Fighters that never happened. The extremely forgettable nature of this particular part of that reboot might have something to do with why it never came to be.As a character introduction, Human Bomb #1 falls flat by giving us a main character that is about as two-dimensional as can be. Beyond "Former Marine and War Hero" Michael Taylor has no personality at all. He's thrown into the middle of mysterious circumstances and discovers that he has incredible powers, and it comes off about exciting as. . .well. . .slightly interesting.The art is about as solid, workmanlike, and interesting as the story. It's neither bad or good. . .it's just sort of there. About the only thing worthy of note with this comic is that it seems to be solidly grounded in Post 9/11 America, being set in New York City and with Taylor being a construction worker at Ground Zero on the Freedom Tower and a veteran of Afghanistan. . .a bold choice of setting more in step with Marvel's real world locations than DC's usual fictional America.Overall, beyond a strange setting for DC and a mildly interesting conspiracy that seems to be behind events, there's not much to recommend about this comic. 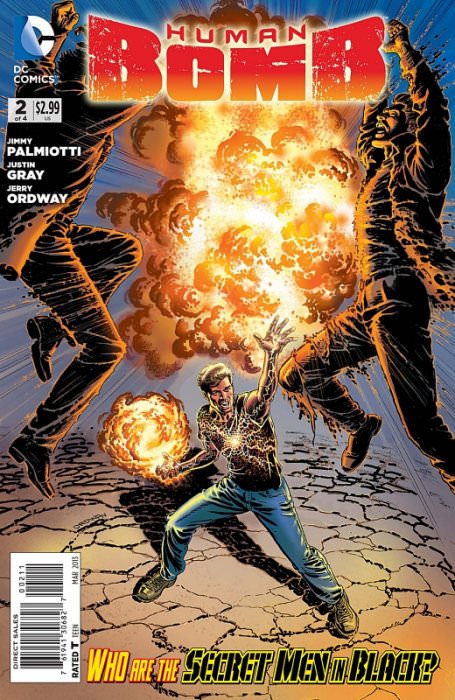 After Taylor is saved by S.H.A.D.E., he discovers that his powers stem from being kidnapped and experimented on by an organization called C.R.O.W.N. while in Iraq. Because he already had a hidden metahuman gene, he is able to control his explosive powers instead of becoming a suicide bomber controlled by C.R.O.W.N.After a half day of training with S.H.A.D.E.'s resident telepath/ info dumper, Taylor is recruited for a mission to destroy a C.R.O.W.N. facility. On the way, he learns that C.R.O.W.N. are actually parasitic aliens bent on domination of the world.Once inside the C.R.O.W.N. facility, the team discovers thousands of humans in stasis, each of them highly-dangerous human bombs. Then they are attacked by a horde of C.R.O.W.N.'s synthetic robot slaves.This second issue is mostly taken up with info dumping and introduction to some supporting characters just as two dimensional as Michael Taylor himself, including Uncle Sam (AKA stalwart S.H.A.D.E. leader and MCU Nick Fury clone) Jean (AKA telepathic info dump and excuse to have in the comic), and S.H.I.E.L.D. er. . .oops. . .S.H.A.D.E. (AKA government shadow ops organization with lots of cannon fodder troops).The art remains solid, workmanlike, and as utterly uninteresting as the main character himself.Basically what we have here is a mediocre effort to build up a New 52 version of Marvel's S.H.I.E.L.D. that they did better with Spyral. And then there's aliens. . .and robot punching. 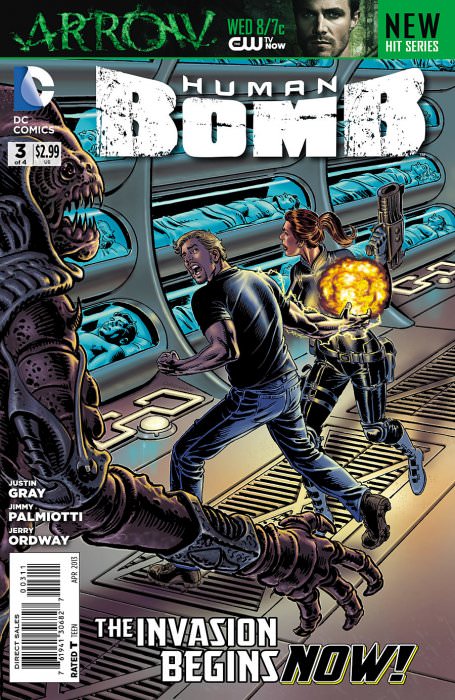 After Taylor and the S.H.A.D.E. team survive attacks by killer robots and then their alien masters, the location of another alien base is discovered during the telepathic interrogation of an alien prisoner.Taylor and Jean travel to a small town that has been completely dominated by aliens, and after fighting their way through the zombie-like townfolk, destroy the alien queen controlling them. But as the base collapses around them, Taylor and Jean find themselves teleported to the main alien base. . .on a moon of Jupiter.Robots and aliens and zombies. . .OH MY!Where the first issue was a somewhat bland introduction to the main character, and the second was a massive info dump, this third issue is pretty much all punching and 'Sploding.New powers are piled on for Taylor as they become useful. First it is established that he causes explosive chain reactions as long as he's touching something and whatever else is touching that. . .handy for 'Sploding a huge horde of robots surrounding him. But THEN later it shows him throwing of explosive fire without touching anything. . .handy for 'Sploding aliens. A good example of the laziness that went into the writing of this mini.So we have a barely-sketched hero with inconsistent powers, robot punching, zombies, and art that tells the story, but doesn't try very hard to do anything else.Not good. 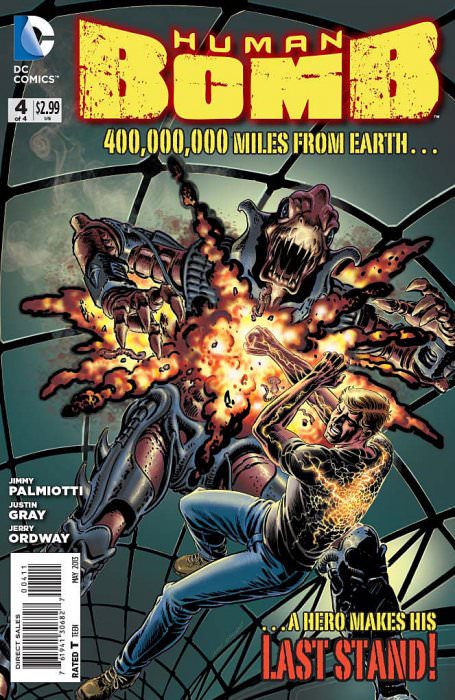 Taylor and Joan find themselves trapped on a massive alien base on one of Jupiter's moons.With no way to escape, they decide to destroy the base, even if they die in the process. After telepathically sending out a distress signal and discovering the aliens are mining the moon for fuel with a huge shaft going to its core, Joan is killed.A vengeful Taylor jumps into the shaft and completely destroys the moon and the alien base along with it. After being rescued by a Green Lantern and returned to Earth, Taylor is offered a place on S.H.A.D.E.'s new superhuman team.And here we are at the big finish.Taylor 'Splodes A WHOLE F*CKING MOON and survives without a scratch.He jumps into a shaft leading into the moon's core and explodes the moon to pieces. . .then is shown floating in space among the debris wearing a pristine space suit before being rescued by Kyle Rayner.There's a little more to the story. Lots of "Sploding aliens and a bit of giant robot punching. Then the last page reveal of the new team that never got a single issue of comic time. But that all falls to the wayside compared to the utter lazy $hit writing of a human being surviving the explosive destruction of a moon.This final issue is titled "The Ultimate Sacrifice". As far as I can tell, the "Ultimate Sacrifice" is that of the hour it took me to read and review these four comic books.

I WANT MY F*CKING HOUR BACK, DC!

This was SUPPOSED to be part of a New 52 resurrection of Uncle Sam and The Freedom Fighters.  I haven't read either of the other two mini's that were a part of that idea (Phantom Lady and The Ray), but if they were as bad as Human Bomb, I can see why the whole project was quietly scrapped.

From forgettable, barely-sketched characters to inconsistent powers to cliche robot punching, the writing just seemed half-hearted.  The art was extremely plain and workmanlike.  Not a single panel stood out in any way.  I'm not saying the writing and art was bad.  But I'm not saying it was good, either.  I'm saying that this series looks like something that minimal effort was put into.

When I bought these comics, I had never heard of Human Bomb.  Now I know why.