A dollar box is like a junkyard. . .hence the title "Longbox Junk".  You do some digging and sometimes you find just the thing you need. Sometimes you discover something you never knew you wanted.  But most of the time you just find junk. 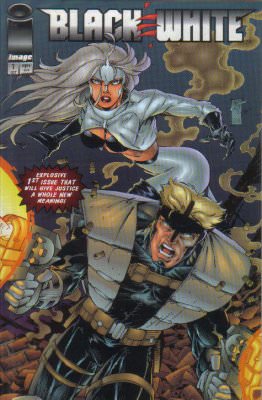 Master Criminal Chang kills most of the Samsung family in a bid to steal their property and claim the secrets lying buried beneath it. Wealthy British spy and wannabe superhero Reed Blackett breaks Whitney Samsung out of an insane asylum in order to team up and stop Chang. Unfortunately, Whitney doesn't plan on taking orders from anyone and jumps right into trouble. This comic is a perfect example of Image's "We REALLY want to be Marvel" 1990's superhero overload heyday. In line with Image's creative control policies at the time, this comic is pretty much a one man show by Art Thibert, and like many other one man shows, the lack of editorial oversight damages the finished product.Where to start. . .There are obvious nods to Batman (or Moon Knight, since Image wanted to be Marvel so bad. Same difference) with the super-wealthy Reed Blackett and his trusty servant, Brookes Grey wearing the rich playboy mask during the day and suiting up for high-tech vigilante crimefighting by night.The dialogue is stilted, and the reader is dropped right into the middle of the story with very little explanation of who is who and what is what beyond that there's an obviously evil guy who wants something buried beneath a family's property, and there is a rich vigilante and the last survivor of the family who want to stop him.The art is decent. It's pretty derivative of the "Image House Style" of the time, with lots of clenched teeth, overly-designed costumes, spiky hair and guns with oddly-shaped barrels. But for all that, it's not full-on Liefeld but more along the lines of Trevor Scott, so it's not too over the top for 1990's Image art.Overall, this opening issue is sort of a hot mess. You have a derivative hero, not much of an introduction, clunky dialogue, and "seen it already in every other Image superhero comic" art. I can definitely see why this series was pretty much forgotten. 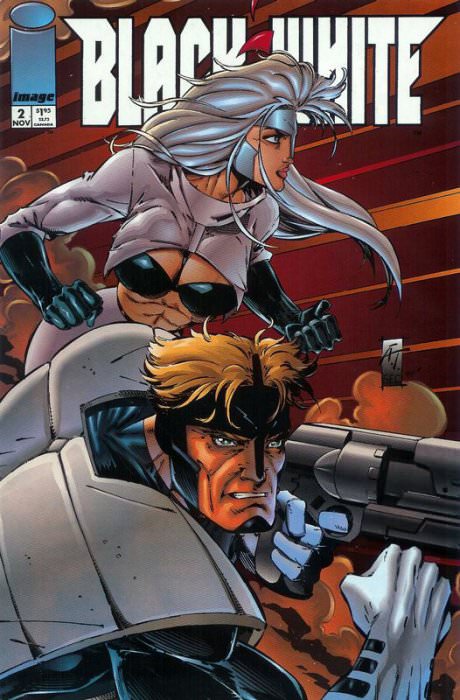 After helping Whitney Samsung (White) escape Chang, she agrees to team up with Reed Blackett (Black) to take her family's killer down. Unfortunately, the team has different ideas on how to go about it. . .Black wants nonlethal justice, while White wants revenge. During an attack on Chang's warehouse where he has been building an army of robots, Black and White finally come together as a team, but Chang escapes, blowing up the warehouse with them trapped inside. This issue slows down a bit for a little background, letting us know that Black works for British spy agency M-10 and that White's family was killed in front of her by Chang when she was 10 years old.The Batman/Moon Knight moments become laughably obvious as Alfred. . .er. . .GREY. . .enters the secret lair beneath Blackett's mansion via secret fireplace entrance. Also, for some reason not explained, Blackett hates guns, so he has Grey modify bullets so that they inject knockout drugs into people he shoots instead of killing them.Batman beats aside, the writing on this comic is pretty bad in general, with White in particular suffering as little more than an excuse to have some in the comic. She's barely sketched as a character beyond "bloodthirsty hothead that must be kept under control" and her dialogue is clunky and awkward enough to be laughable at times.The art remains the strong point on this comic, especially the awesomely 90's -tastic cover. Unfortunately the decent art is not enough to save this issue from being utterly average and forgettable. 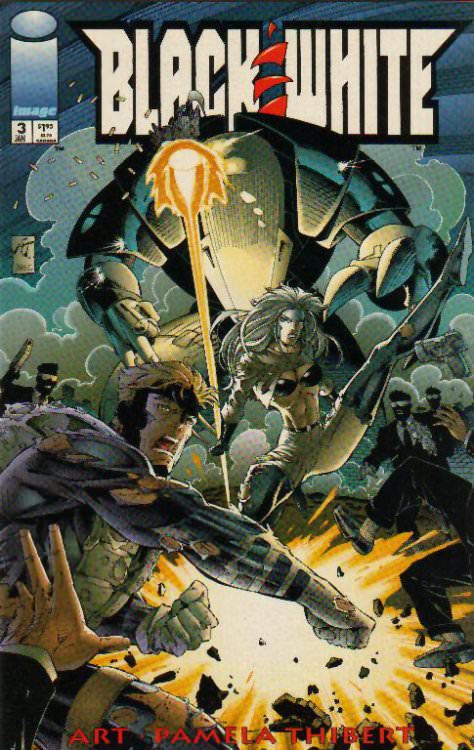 After surviving Chang's trap, Black and White rush into the final confrontation with their enemy, who is trying to leave the country with a plane full of killer robots. And finally we come to the big finish!And it's kind of . Not just any , but that special kind of all-action Image 90's . It's a nostalgic sort of , with just a whiff of desperation wafting from the letters page, where we are repeatedly told that Black and White will be an ongoing series. . .even though that ongoing series consisted of a single, lonely issue. And then there's giant robot punching.Thank it's over.

What we have here is a trip back to a particular moment in time, and it's not a great moment.  It was just before the comic market pretty much collapsed under its own weight because there were so many new series starting up so that collectors could catch that SWEET #1 issue that was going to be worth a fortune!  The gimmick and variant covers. . .the X-treme characters. . .belts and pouches and straps, OH MY!

Black and White is definitely a product of its time.  It's really not a very good series, but it's not awful.  If I had to describe it in one word, it would be: Forgettable.  It's a perfect example of everything that was wrong with comic books in the mid-1990's.  In the rush to push out more and more product for collectors, 95% of it was forgettable . . .like Black and White.

If nothing else, Black and White is interesting as a sort of time capsule, but beyond that it's pretty much the definition of Longbox Junk.