Let's get this out of the way. . .I'm a HUGE fan of the Mass Effect video games.

I'm even going to go ahead and put my nerd cred on the line and say that despite my initial misgivings, I liked the much-hated and presumed series-destroyer Mass Effect: Andromeda to the point that I played it until there was literally nothing left to do!  And I didn't like Andromeda nearly as much as I liked the original trilogy of games.

In other words, when it comes to the Mass Effect video games, I'm a fan.

But what about the comic books?

What we have here is a 4 issue mini put out by Dark Horse prior to the release of Mass Effect 2, which is generally regarded as the best game in the series.  An opinion I agree with.  It fills in a few plot holes from the beginning of the game and gives a bit of background for an expansion story that came later.

So it has a purpose, but is it any good? Let's find out! 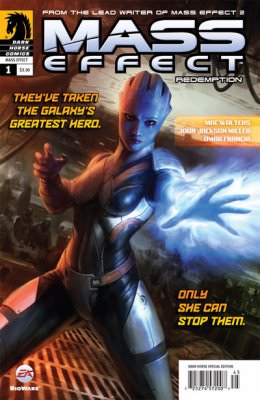 After a surprise attack on the Normandy, Commander Shepard is presumed dead. One of his companions, Doctor Liara T'Soni is determined to find out the truth of what happened and follows a lead to Omega Station, where she meets with a rogue information broker named Feron that claims to know where Shepard's body is. As Feron leads Liara to Shepard's remains, they are attacked by agents of The Shadow Broker and rescued by Miranda Lawson, an agent of Cerberus. Feron and Liara are taken to the leader of Cerberus, The Illusive Man, and Liara learns that an alien race known as The Collectors are working for The Shadow Broker to steal Shepard's body for an unknown purpose. Liara agrees to work with Cerberus to keep Shepard's remains out of The Collector's hands. This first issue is mainly setup for the rest of the series, which takes place shortly after the opening of Mass Effect 2 and tells the tale of how Cerberus got hold of Commander Shepard's body.It's pretty well written and sets things up well. Nothing fancy with the writing. It's definitely along the lines of "This happened, and then this happened." Pretty straightforward and moves along at a brisk pace.Unfortunately, this comic assumes that the reader is already familiar with Mass Effect and the ongoing video game storyline. It's definitely written with the built in video game audience in mind. The reader is basically dropped cold into the middle of events.On the other hand. . .for being written for existing fans of Mass Effect, it's pretty fast and loose with the main character, Liara. In the games, she's an academic. . .shy and often unsure of herself and her abilities. Here, she's portrayed as brazen, forceful, and almost superheroic in the use of her biotic powers. It almost reads like fan fiction and is way out of established character for her.The art is clean and crisp, with darkly-inked lines that really make everything pop. The painted cover is simply fantastic! Unfortunately, as with the writing, the artistic portrayal of Liara is way out of established character.

In the games, she is shy and a bit standoffish, often almost defensive in posture. Here, she is overly-sexualized, with a lot of focus on her and . . .as a matter of fact, she is way more sexualized than Miranda. . .who (in the game) is portrayed as a person genetically modified to be the perfect woman, while here Miranda looks frumpy next to Liara. Once again, it's all a bit fan fiction-y. Overall, despite the uncharacteristic portrayal of Liara, as a huge Mass Effect fan I liked this first issue. If you are not already a fan of Mass Effect, it's going to seem like a somewhat confusing conspiracy-tinged chase story starring a sexy alien with space magic powers. 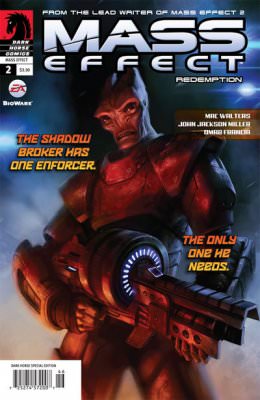 After agreeing to work with Cerberus to recover Commander Shepard's body, Liara discovers that her contact, Feron, is an agent of The Shadow Broker. After convincing Liara that he's on her side, Feron arranges a meeting with Omega Station crime kingpin and de facto ruler, Aria T'Loak, who tells them that Shepard's body is being readied for transport on the lower levels of Omega. Liara and Feron rush to intercept Shepard's body before it leaves the station, but things fall apart and Shepard's remains are taken by Tazzik, The Shadow Broker's most brutal enforcer. The writing on this issue remains crisp and direct. . .but the same problem from the first issue crops up here as well, namely that Liara is portrayed out of character as a brash, confident, almost superheroic figure. For a fan of Mass Effect, it's really distracting and takes away from what should be a simple and exciting story that fills in a bit of a plot hole in Mass Effect 2.The art in this issue (with the exception of the outstanding painted cover) takes a noticeable dip in quality. While it's not BAD. . .I still like the dark ink lines and bold style. . .the coloring here becomes a bit more gaudy and the artist can't keep the faces consistent during talking head scenes. On top of that, the overly-sexual portrayal of Liara is still a pretty distracting element. . .especially when the artist can't decide just HOW big Liara's are and they change from panel to panel.Overall, this issue was okay. . .but not much more than that. The uncharacteristic portrayal of Liara in both writing and art distracts from what should be a decent little story. 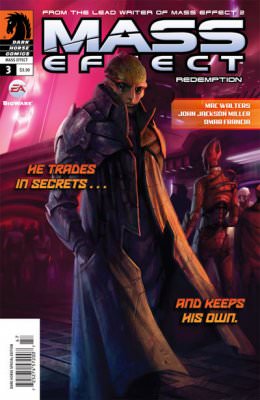 After losing Shepard's remains on Omega, Liara and Feron track Tazzik to a Shadow Broker base on a desolate planet. Liara confronts The Shadow Broker, demanding answers and getting none before she destroys most of the base. Feron discovers that they've actually beaten Tazzik to the outpost and that Shepard's body hasn't been handed over to the Collectors yet. Liara and Feron rush to intercept the trade. This third issue buildup to the big finish is pretty disappointing. The uncharacteristic portrayal of Liara is magnified here as she goes into full on destructive mode, single-handedly taking down multiple enemies and destroying most of a base. . .but this time out, the writer ALSO decides to throw some very out of place humor into the mix, with Liara quipping while blasting enemies and making buddy movie jokes with Feron that fall flat because her relationship with Feron up to this issue has been unwary bordering on hostile. . .and now all of a sudden they're trading jokes? It's a pretty jarring departure from the status quo established in the first two issues, and in any case the "humor" is pretty bad.There's a lot of fighting in this issue, which seems to be the artist's strong point, so the art swerves back to the good side of things due to the lack of talking head scenes. Unfortunately, there's quite a few panels of Liara mugging and posing in a way that makes you think of a DeviantArt Mass Effect fan page.Overall, a disappointing issue with "Sexy Superhero Liara" ramped up past what's been seen in the first two issues to the point that this really looks less like a major studio tie-in and more like something to be found in the same corner of the internet as pics of Hermione Granger wearing a bikini and riding a Quidditch stick with a shirtless Harry Potter. 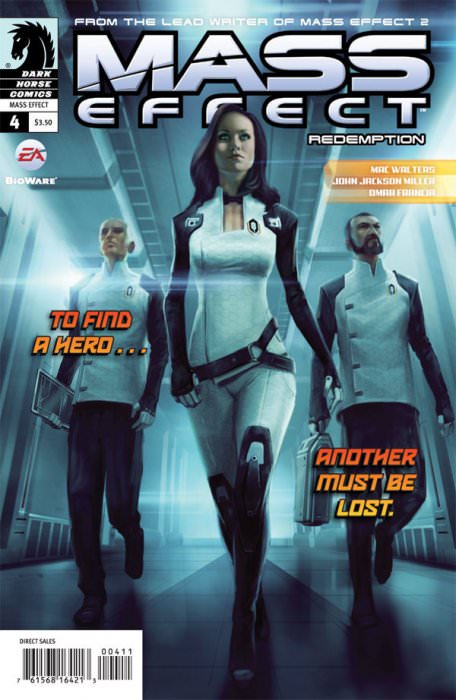 As Liara and Feron rush to prevent the transfer of Shepard's remains to The Collectors, Feron reveals that he's actually a triple agent working for Liara, The Shadow Broker, and Cerebrus, but has decided that Liara is his chance for redemption. Feron attempts to interrupt the transaction, but The Collector agent sees through his bluff and a battle ensues. Liara manages to escape with Shepard's body and encrypted files on the Shadow Broker's operations, but is forced to leave Feron behind in the chaos. At a secret Cerberus base, Liara learns that Commander Shepard is beyond reviving. She leaves Cerberus and Shepard behind, determined to rescue Feron and put a stop to The Shadow Broker. And so we come to the big finish. . .This issue isn't quite as bad as the previous one, and it wraps things up nicely, filling in a few small plot holes existing in the Mass Effect 2 game. . .such as how Cerebrus got hold of Shepard's body, why Liara wasn't aware he was alive or working for Cerebrus, and who Feron was and why Liara invaded the Shadow Broker's headquarters to rescue him (In the Lair of The Shadow Broker DLC). But to tell the truth, it seems like these little patches weren't worth 4 issues of comic book to fill in.Feron's swerve from borderline enemy to self-sacrificing hero seems rushed. Miranda's send-off of Liara and her complete acceptance of it seems questionable. The quips and forced humor seen in the last issue return.Because it's mostly fighting, the art on this one, especially the FANTASTIC cover, is good. . .especially the rendering of The Collector agent, which is truly creepy and probably better than what was shown in the game itself. Unfortunately, as is the case for this entire series, Liara is portrayed as a badass space superhero instead of a shy scientist with a lack of confidence in herself. . .she double-fists laser pistols, spin-kicks enemies, and generally wrecks anyone that stands in her way.Overall, I liked that this issue filled in a few small holes in the Mass Effect 2 narrative. What I didn't like is that it did it by turning an interesting, thoughtful character into an action movie hero with jiggling and bad jokes.

I'm gonna be honest here and say that to a huge Mass Effect fan such as myself, the best part about this mini is the fantastic painted covers.  I've never heard of Daryl Mandryk, but he's got these covers NAILED!

If I had to describe Mass Effect: Redemption in one word, that word would be. . .Fanfiction.

The writing isn't bad. It's snappy and moves the story along at a nice fast pace.  The art isn't bad.  It's crisp and nicely inked. The stoy isn't bad.  It fills in some plot holes in Mass Effect 2 (granted, those holes are really only noticeable to huge fans such as myself).  The problems here are characterization and inaccessibility.

In the games, Liara T'Soni is a young, shy Asari scientist who lacks confidence in herself and her abilities until she found a place among friends as part of the Normandy's crew.  In this series of comics, she is written AND drawn as a super-sexy badass alien superhero.  Completely out of her established character.

LIARA FROM THE GAME: 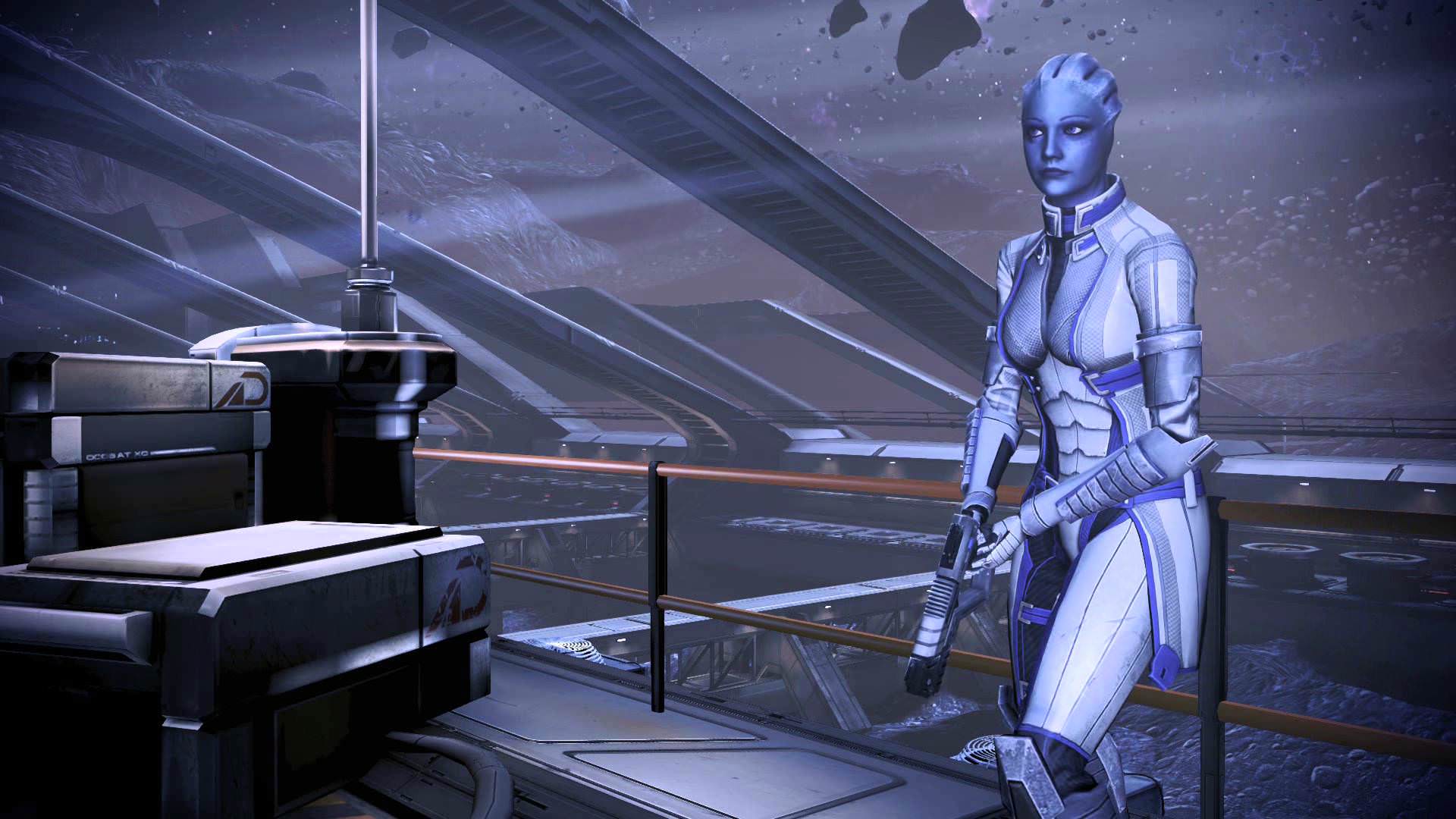 LIARA FROM THIS SERIES: 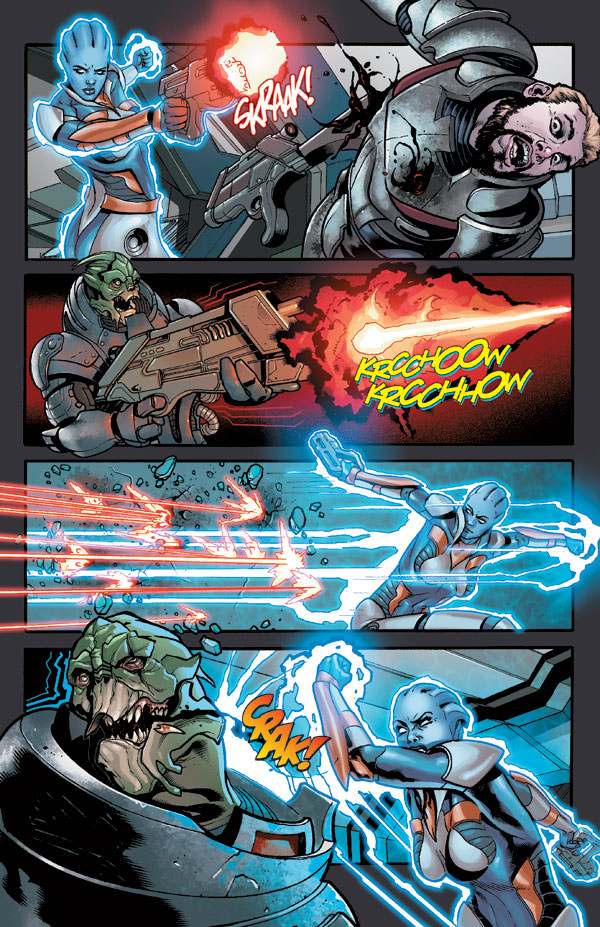 She's so oversexualized and made into such an unstoppable force of galactic -kickery that this series is less like an expansion story about an established character and more like a piece of semi-erotic fan fiction.

Unless you're a big Mass Effect fan that MUST partake of every crumb of Mass Effect-related merchandise, I suggest you steer clear of this one.  It's a waste of decent comic talent and a shame.

How about a Predator story with hardly any Predator in it?