Luke Skywalker is searching for a way to learn more about the Jedi, now that he's had a taste of what can be accomplished with The Force.  Doctor Aphra is a rogue archaologist who used to work for Darth Vader and has managed to get her hands on the archived (Read: Imprisoned) personality of an ancient Jedi that she can't access.  They've met before and are sort of frenemies.

So there's the background.  Let's do this! 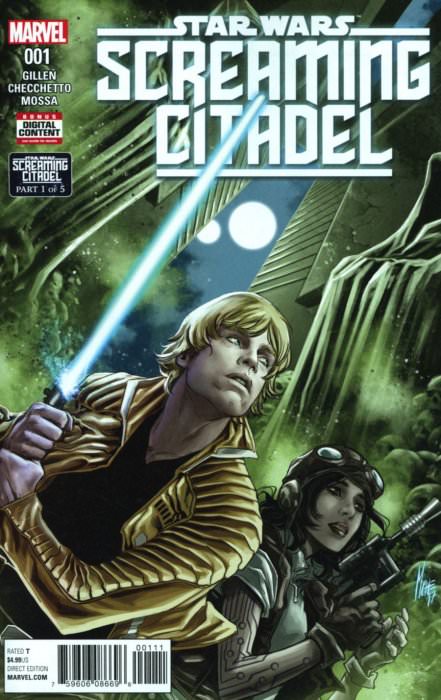 Doctor Aphra presents Luke Skywalker with an interesting proposition. . .she holds the archived personality of an ancient Jedi Master but can't access it. In exchange for his assistance in convincing an immortal queen to open it's secrets, Luke can gain the Jedi training he has been searching for.This first issue of "Screaming Citadel" is probably some of the best Star Wars I've read in quite a while! The story is mostly introduction and setup (as is to be expected in a first issue), but the snappy dialogue and quick pace make it much more enjoyable than one would expect from an opening issue info dump. Everything is put into place quickly and efficiently. . .Aphra and Luke meet and leave on their mission while Han, Leia, and Sana (Han's ex wife) wonder where they went and if Luke went willingly, nicely splitting things up into two ongoing story threads.The art on this book is remarkable in every way. Reading this makes me wish Checcetto was the regular Star Wars artist. He has an extremely detailed, yet sort of murky style that is perfect for the worn down Star Wars universe. A particular standout is the Vampiric Queen of The Screaming Citadel and her minions, clad in red and black and looking utterly amazing.Overall, Screaming Citadel is off to an extremely strong start. The writing is on point in every way, and the art makes every page something to be lingered over. Very well done! 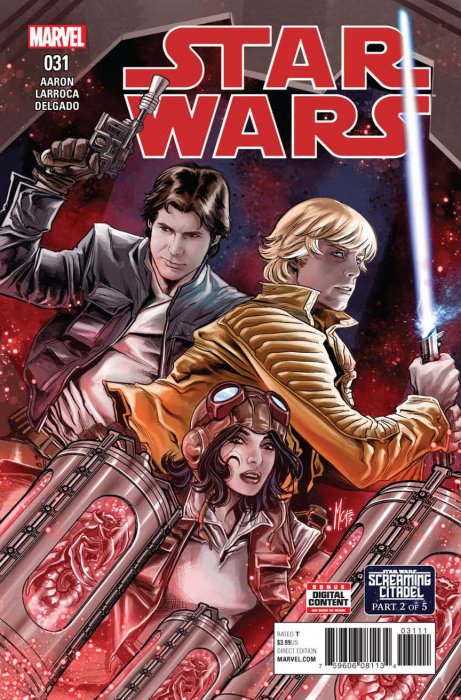 Luke Skywalker and Doctor Aphra are betrayed by the Queen of The Screaming Citadel and find themselves running for their lives while pursued by the Queen's forces. In the meantime, Han Solo, Princess Leia and Sana Solo arrive with the intent of rescuing Luke from Aphra.After the fantastic opening issue of Screaming Citadel, I was a little let down by the second. Now that setup is done with, the story moves quickly into "It's all gone to " territory. The writing is still good, with the deadpan sarcasm of assassin droid Triple Zero standing out.To me, the art on this issue really knocks things down a couple of notches. Salvador Larroca's art isn't BAD. . .it's quite good when it comes to the dark, gothic backgrounds and the gritty, worn machines of Star Wars, but his faces are so obviously photo-referenced that they are in that creepy uncanny valley. The faces that aren't photo-referenced are pretty bad. . .especially Aphra, who is inconsistent from panel to panel, with some panels being just plain bad.Overall, a dip in quality from the first issue as the story goes into action mode and the art swerves from really good to really bad from panel to panel through the whole thing. 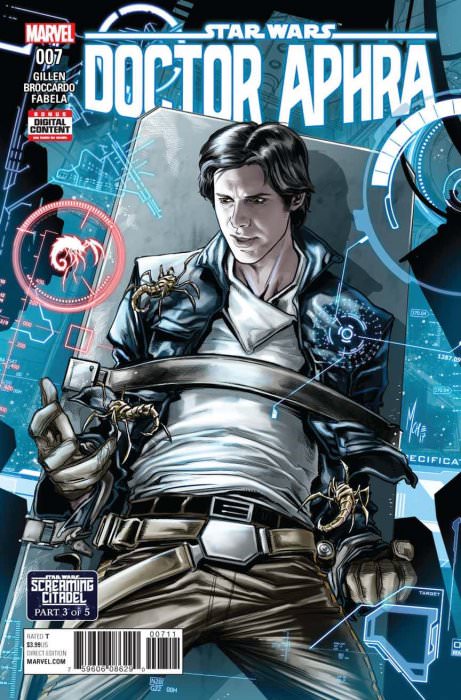 Han Solo, Sana Solo and Princess Leia are united with Luke Skywalker and Doctor Aphra, but are trapped in the Screaming Citadel with their ship badly damaged.As they try to come up with an escape plan, Aphra betrays the rebels and delivers Luke to the Queen of The Citadel. When his friends try to rescue him, The Queen possesses the mind of Han Solo.As a last resort, the rebels implant a deadly parasite in the brain of Wookie mercenary Black Krrsantan in order to fight their way through the Queen's forces.There's quite a bit more going on in this issue than what I expected from a "Everyone gets together and tries to escape" storyline. The twist of Aphra betraying and handing over Luke to the Queen was an unexpected surprise, and the dialogue from Assasin droid Triple Zero was a standout. He's really one of my favorite characters in the Marvel Star Wars comic universe reboot.But even though there are a lot of story threads moving around in this issue, there are some strange choices as far as characterization goes. Leia is portrayed as a hardcore military commander who expects nothing less than total obedience to her orders, and Aphra is portrayed as less of a scoundrel with a heart and more as a ruthless mercenary. Aphra's behavior I can sort of see as part of a possible redemption arc, but Princess Leia suddenly turning into General MacArthur is just strange.The art in this issue leaves behind the creepy photo-referenced faces in favor of a more stylized and cartoony look, but that also comes at the expense of the highly detailed backgrounds and machinery seen in the Star Wars issues of this crossover.Overall, aside from some strange characterization choices and bland artwork, this was a pretty good issue. . .not great. . .just pretty good. 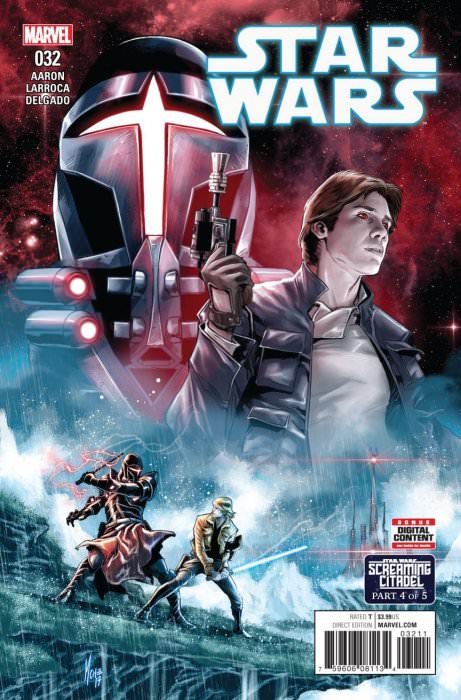 As the rebels fight their way through the Screaming Citadel, Luke Skywalker is held captive by the Queen so that she can feed on his life force. A mind controlled Han Solo leads the Queen's forces in trying to capture the rebels.As Doctor Aphra leaves the planet with her prize. . .the activated personality archive of the ancient Jedi, Rur. . .she has a change of heart and returns to rescue Luke Skywalker. Unfortunately, the only way she sees she can succeed is by infecting him with the same deadly parasite the Queen uses to control her subjects.So now the story starts to hurtle forward and off the rails a bit as it gains momentum for the final part. This issue is pretty much all fighting, and except for some great dialogue from Assassin droid Triple Zero, there's not much story to be found.

Aphra's turnaround was just as predictable as I noted in my review of the last issue, and Han Solo's over the top heel turn as new commander of the Queen's forces is villain cliche to the point that all he's missing is a mustache to twirl as he menaces Princess Leia with a mind controlling parasite.Then there's the art. Once again we get extremely creepy photo-reference faces on the movie actors and inconsistent faces on everyone else. There's a panel of Han Solo geared up in Citadel armor leading some troops where it looks like his head is badly photoshopped on. Not good.Overall, there is a pretty big dip in quality on this issue in both writing and art. The whole thing just seems sort of rushed and slapped together. It's not all bad. . .but there's not enough here to make me call it good, either. 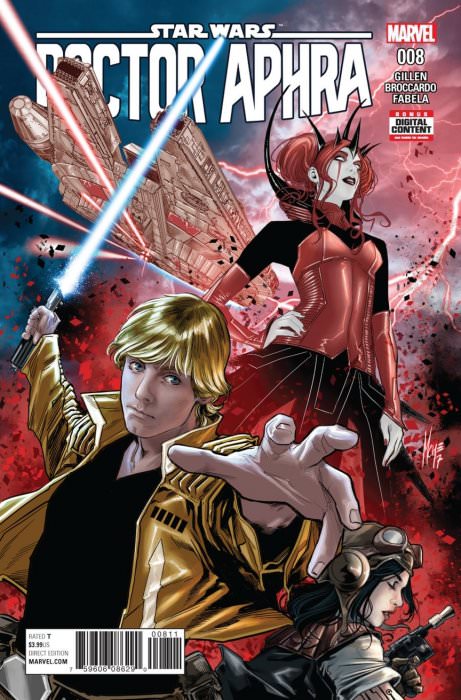 A symbiote-infected Luke Skywalker and the Queen of The Screaming Citadel engage in mental battle as Luke's rebel friends fight for their life against a mind controlled Han Solo and the Citadel's forces.Aphra attempts to tip the battle in Luke's favor with the mental powers of the Ancient Jedi Rur assisting him, but Luke refuses to give in to the mental domination of Rur and defeats the Queen on his own.With Han Solo now in mental command of the Citadel's forces and in control of himself with the Queen's death, he releases all of her mind controlled slaves and the power of The Citadel and its Queen is over and done with.So here we are at the big finish. . .Thankfully, the story tightened up a bit from the mess that was in last issue. The mental battle between Luke and The Queen was pretty well done, and the ending with Luke turning down Aphra's offer of letting him learn from Rur because Rur was obviously insane from all the years spent captive in a crystal and that he was just going to have to learn to be a Jedi some other way was also pretty good. The epilogue with the Queen Symbiote finding another host and deciding to leave the planet left things pretty much wide open for her to return and was a satisfying ending to this crossover.But despite the good, there was also plenty of bad. Han Solo's dialogue while possessed by the Symbiote was just plain bad. Leia suddenly swerving back from being the tough General MacArthur type and going back to the Sensitive Princess was pretty strange, and nobody else seemed to notice.The art is improved over the previous Doctor Aphra issue of the crossover, but swerves too far toward the cartoony side and looks a bit rushed in places. In one panel, Doctor Aphra is drawn without a nose.Overall, despite some questionable writing and art here and there, I found this final issue of The Screaming Citadel to be a good ending to the story. It ties up everything neatly and leaves it open for the villain to return later.

When I think about "Star Wars Vampire Story", I raise an eyebrow and think "I like the sound of that." Unfortunately, while this crossover series wasn't BAD, it really wasn't that good either.  It sort of rides right down the center and is ultimately a bit forgettable.  Screaming Citadel WANTS to be something unique, and it tries. . .I have to give Marvel credit for trying something new with Star Wars. . .but it just doesn't try hard enough.

A big part of the problem for me was the schizophrenic nature of the art.  First you have Marco Checchetto delivering a near perfect opening issue and some great covers, then you have Salvador Larroca and Andrea Broccardo switching back and forth between creepy photo-referencing and cartoony, making Screaming Citadel a kind of "Three Bears" situation: Too Hard. . .Too Soft. . .Just Right.  I can only imagine that the transitions must be even worse when reading it in trade.

But despite the art, I can't say this crossover was bad.  It was interesting to see a different kind of Star Wars story.  But the differences in setting and the darker tone didn't keep it from turning into a typical running fight you've seen over and over again in Star Wars comics for the past 40 years.

Overall, I can say I liked this story, but not enough to say it's up there with some of the best Star Wars comics.  Ultimately it doesn't really deliver on the promise of its ideas.