I'm not a big fan of The Avengers for the same reason I'm not a big fan of The Justice League.  I like individual characters on both teams, but it just seems like a failing proposition to keep coming up with stories that can present a challenge to a combined team of the mightiest heroes on Earth.  It all just sort of reeks of fan service, and I prefer lower-key super heroics.

I seem to be in the minority when it comes to comics starring laughably overpowered super-teams,  and that's okay. . .I just pass 'em by and read what I like.  But I occassionally make an exception.  Case in point being the 4 issue Avengers: Millennium series at hand.  My local comic shop had all four issues bundled for 5 lousy bucks with that SWEET cover for issue #1 on top.  I may not buy Avengers on the regular, but 4 issues for 5 bucks with at least one cover to make my office wall comic art rotation was a deal I couldn't refuse. 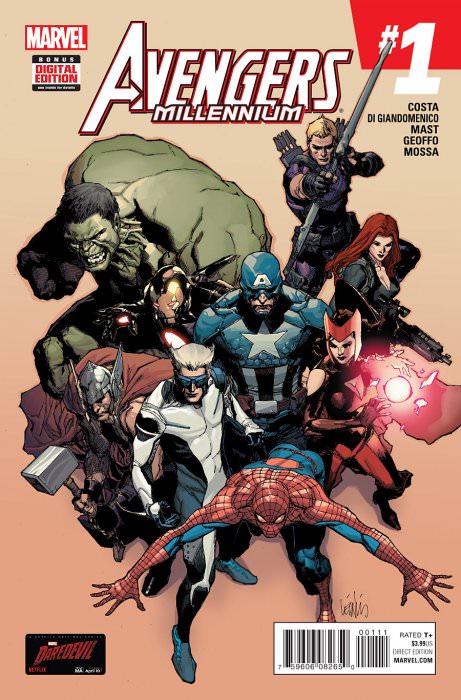 When The Scarlet Witch senses something very wrong with a seemingly-insignificant Hydra base in Japan, she sends Quicksilver to gather The Avengers to help her investigate. After easily defeating the Hydra forces guarding the base, they discover an open time portal in the tunnels below. . .First off, the awesome cover by Leinil Yu is definitely frame-worthy. One thing, though. . .Thor is there in the cover's group shot, but don't go looking for him inside. For some reason this Avenger series is Thor-less.It's a pretty simple story in this first issue, basically getting The Avengers assembled and in Japan for an extended fight scene and a cliffhanger ending. . .but even though it's pretty much all setup, it's well written, with some clever moments in the dialogue, especially Hawkeye and Spider Man's running debate about cheeseburgers.I'm a fan of Carmine Di Giandomenico's quirky art style, but he's one of those "Love it or hate it" sort of artists. I felt that his extremely kinetic and cinematic style added a lot to the book. I think that with a more mainstream artist, the pretty flimsy story would have really been magnified and suffered for it.Overall, this was a great opening issue, setting things up nicely with witty dialogue and fantastic art. 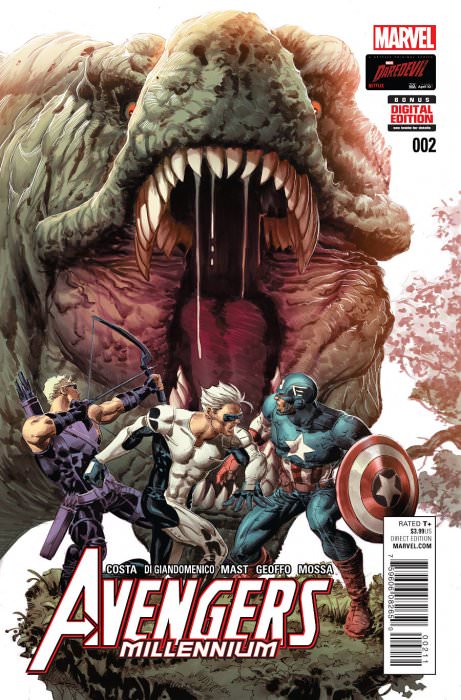 Dr. Bruce Banner (AKA The Incredible Hulk) determines that the open time portal the Avengers discovered leads to two different time periods (prehistoric and WWII) and that Hydra has hidden something in one of them.The Avengers split into two teams and go to investigate, but something goes wrong and they end up scattered, with Quicksilver, Captain America, and Hawkeye ending up in prehistory, Spider-Man, Iron Man, and Black Widow in WWII, and Scarlet Witch and Hulk finding themselves in a post-apocalyptic future.Captain America's team discovers that whatever Hydra has hidden, it was in prehistoric times, but a captured Hydra agent tells them that the portal is a one way trip. Oops. . .This second issue is more setup. It separates the large cast of characters into smaller groups and presents them with a major problem in that they are seemingly trapped in time. Worse, the team that lands in the future discovers that Hydra's plan was a success. The writing remains snappy and moves the story along without dragging. The writer does a good job of making the extremely thin story interesting.Di Giandomenico's cinematic art style is a big help in propping up what little story there is here. Unfortunately, his style doesn't lend itself well to the animals Hydra controls and uses in battle in the prehistoric scenes, but that's only a few panels over a couple pages, so it doesn't take away too much from the book.Speaking of prehistoric animals. . .the cover on this one is deceptive to say the least. There's not a dinosaur in sight inside. Overall this issue was good. . .not as good as the first issue, but still going strong. 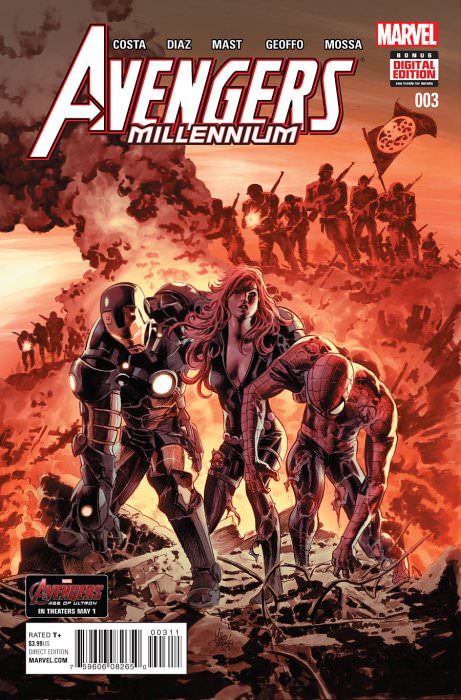 In Japan near the end of WWII, Iron Man, Black Widow, and Spider-Man infiltrate a Hydra base and discover that whatever Hydra is hiding, it needs the seismic activity and radiation of the soon to be dropped atomic bomb.Meanwhile, in the far future, The Hulk and Scarlet Witch are attacked by Hydra forces. After defeating them, Scarlet Witch decides it's time to get to the bottom of the mystery and discovers not only that whatever was once hidden is gone, but also finds Captain America in a stasis tube!First off. . .how about that -tastic cover? Like the rest of the covers for this series, it doesn't really represent what happens in the issue, but it certainly represents Black Widow VERY nicely. *ahem* ANYWAY. . .After an extremely strong start and second issue, things start to take a turn for the worse in this lead up to the big finish.Where the jokes and witty banter of the first couple of issues pretty much hit the mark, the humor falls flat in this one, with clunkers like Spider-Man dressing in drag to get past Japanese guards. The whole scene is a little embarrassing and pointless. Thankfully, it's only a few pages.Beyond the failed attempts at humor, there's also the fact that both of the stories at hand are basically repeats. . .heroes infiltrate base, heroes are attacked by a lone superior Hydra soldier during the larger battle, the superior Hydra soldier is defeated by surprise attack, heroes discover surprising revelation pertaining to plot. Both the WWII group and the far future group follow that exact same outline. That's not to say it's BAD. . .the ending cliffhanger with the discovery that Captain America put himself in stasis in prehistory so that he could help the team in the future was pretty clever. There's also some nice dialogue between Scarlet Witch and Hulk.There's also an artist changeup in this issue that knocks things down a notch. In the reviews of the first two issues, I wondered if a more mainstream artist would magnify the flimsy story and I got my answer in this issue. The answer is yes. The art in this issue looks amateurish compared to Carmine Di Giandomenico's unique style, and without that extra layer of eye candy it's pretty obvious that this mini is really a story that could have been told in two issues.Overall, this issue isn't bad. . .it's just not as good as the first two. The humor falls flat, the two stories basically copy each other, and the art is disappointing. 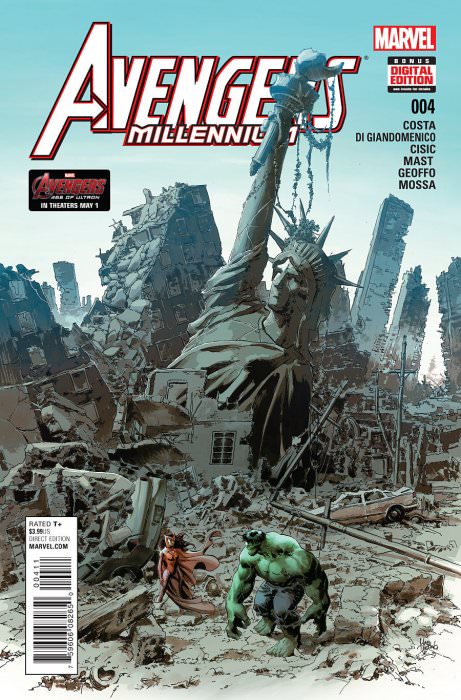 Iron Man manages to re-open the time portals and reunite the scattered Avengers back in the present, only to be forced into battle against a time-travelling Superior Hydra Soldier riding a giant monster hatched from the egg that had been buried for 12,000 years and bent on destroying a Japanese city for. . .reasons?And now for the big finish!No. Actually it's pretty weak.This series has been declining at a fairly even pace since the first issue, and this final issue is definitely the worst of the bunch.The 12,000 year time travel puzzle basically boils down to a discount Godzilla that needs punching and a strangely random Hydra soldier who also needs punching. It's an extremely weak payoff for all the setup. Even worse, the way that Hawkeye comes up with a solution to the problem of the egg never hatching and therefore Godzilla. . .er. . .KAKARANTHARIAN that is. . .not needing to be punched, but vanishing back into the timeline, is laughably vague and feels like the writer was sort of desperate to figure out a way to end the story quickly. . .like there might have originally been 5 issues planned for this series.On the good side of things, Carmine Di Giandomenico is back on art and the issue at least LOOKS great. The double page spread of the Avengers re-assembling is a real standout. The cover is also fantastic, but I want to know why the the Statue of Liberty is in the middle of the city. Doesn't Mike Deodato know the Statue of Liberty is on a friggin' island?ANYWAY. . .Overall, except for the art and cover, there's not much good about this issue. It's a shame that a decent little story about The Avengers trapped in time and trying to solve a puzzle came down at the end of things as just another "Heroes Punch A Giant Monster" comic book cliche.

I'm not really a fan of The Avengers, but I found this min-series to be entertaining. . .at least until the final issue where it basically turned into a "Punch The Giant Monster!" cliche.  The art was great, for the most part.  There were a few funny moments scattered throughout, and the simple framework of "The Avengers Trapped In Time" propped up a story that really should have been two issues pretty well for four.

Overall, it's not a bad mini. . .but it's really not that great either.  If I had to describe it in one word, that word would be "Forgettable".  It's one of those things you read once and never really think about it again.

Star Wars! Vampires! Star Wars AND Vampires! How can it NOT be good?