Anyone who's been reading this blog for a while knows I have a love for the one shot.  Those tasty little bites of comic book tapas where the creative team has a single issue to tell a whole story.   You never know what you're going to get with a one shot. . .sometimes they hit it out of the park, other times it's a foul ball.  Wait. . .how did I go from food comparisons to baseball?

One shots! Let's do this! 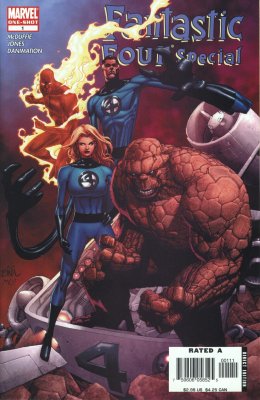 While Reed Richards and Doctor Doom have dinner together, the rest of the Fantastic Four, along with Captain America and Spider-Man, fight Doombots in search of a unique component Doom needs to open a portal to another world that Richards has kept hidden since he and Doom were college roommates. I'm not a big Fantastic Four fan, but this one shot was pretty good! The ending in particular was very nicely done, as Richards returns the item Doom has been searching for willingly. It's a very sentimental moment between mortal enemies. The whole comic is very well written and surprisingly engaging. . .especially for someone who isn't a real fan of "traditional" superheroics like myself.The art isn't anything spectacular. It's very nicely done in a clean, dynamic, cartoony way. The opening few pages (set during Doom and Richard's college years) could have been ripped straight from a Silver Age comic. Overall, this was a surprisingly good one shot with a great story and nicely done art. 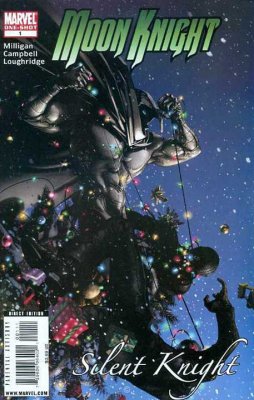 Moon Knight spends Christmas Night tracking down and punishing a group of thugs who killed a store Santa in cold blood. In the meantime his lover, Marlene, waits for him over a cold Christmas turkey.I liked this one shot quite a bit. Milligan digs deep into both Marc Spector and Marlene. Both of them want normal lives, but both of them also realize that they sort of get off on the dirty, brutal life of being a street-level superhero and loving one. It's a really dark look at a "you can't have your cake and eat it too" situation where they feed into each other's insanity in a vicious circle of trying to change someone, but not REALLY wanting them to change.The art on this one is as dark and gritty as the story and is a perfect fit for this grim little tale.Overall, very well done all around. 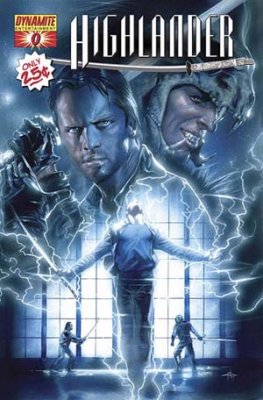 In 1986 The immortal Highlander Connor McCleod is once again dragged from his peaceful life when followers of the defeated Kurgan start to cause havoc in Paris and Russia.This very short one shot serves as an introduction to Dynamite's ongoing Highlander series. It's heavily tied to the first movie (while at the same time sort of ignoring it), so anyone who hasn't seen it or doesn't remember it will be lost because this story just jumps right in without any background on who, what, or why.The art is decent, but completely unsuited for this sort of book. McCleod looks NOTHING like his movie counterpart and the bright coloring and exaggerated features belong more in a superhero comic than one about immortals hiding in the shadows.An extremely weak and short story tied into a movie on one end and an ongoing series on the other with an unsuitable art style make this one shot worth every penny of the .25 price tag. . .but not one cent more. 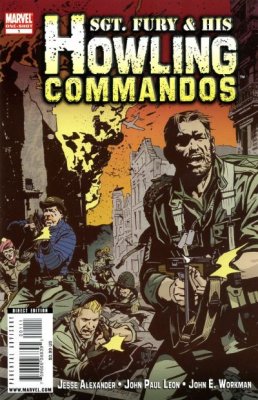 Sgt. Nick Fury and his Howling Commandos go to -occupied Yugoslavia on a secret recon mission and find themselves teaming up with a Soviet Black Widow to infiltrate a base where Baron Zemo is building a nuclear weapon. After destroying the weapon and failing to escape, the Howling Commandos and Black Widow are taken prisoner and taken to ANOTHER secret base, where they pretty much punch to death a giant robot built by Baron Strucker. All in all. . .business as usual for Nick Fury and The Howling Commandos. I found this 2009 one shot to be a lot of fun. The story is pretty ridiculous. . .especially parts where Fury jumps from tank to tank with the help of an umbrella, and the ending where the Howlers basically punch a giant robot to pieces. . .but there were also a lot of moments that were nothing but good, goofy throwback war comic fun.The art on this one shot is fantastic from cover to last page, with a gritty, dark tone. A double-page spread introducing the Howling Commandos is a real standout in a book full of great panels. The depiction of the WWII Black Widow was also fantastic. The art isn't a perfect match for the light silver age throwback tone of the story, but it's impressive on its own.Overall, a fun story with great art makes this one shot a winner! 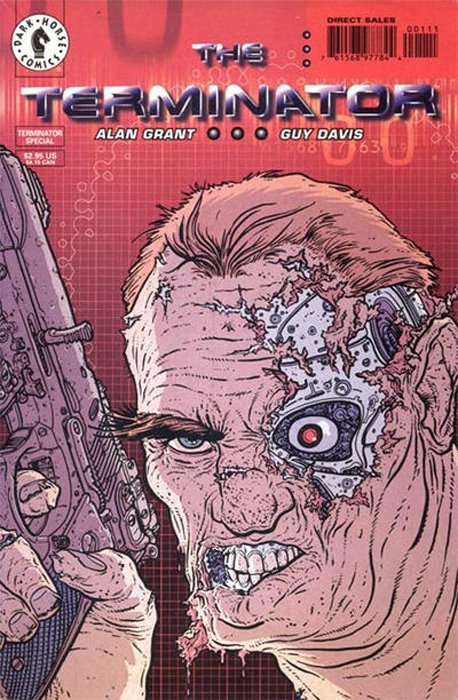 Skynet discovers new information on John Connor's childhood and sends 2 Terminators back in time to a Satanic cult's Death Valley hideout.This one shot serves as an introduction to Terminator D-810X, a female Terminator that is the main villain in the following 4 issue Dark Horse Terminator mini.The story itself is pretty light. Skynet discovers information and sends Terminators back in time to investigate. Terminators completely eliminate Satanic cult. There's a bit of a side story about a private detective tracking down a girl who joined the cult, but both he an the girl are killed, so it's a bit pointless. It's not a BAD story, it's just extremely light.The art is a bit uneven on this one. Machinery and tech, including Terminators, are very nicely done. The introductory 3 page battle against a Skynet tank in the future is a real feast for the eyes with all the detail. Unfortunately, the artist isn't so great with humans, so the art is a bit of a mixed bag, swerving from fantastic to borderline bad.Overall, this one shot is pretty forgettable and since it's tied in with another series, I wouldn't suggest it to anyone but Terminator completionists. 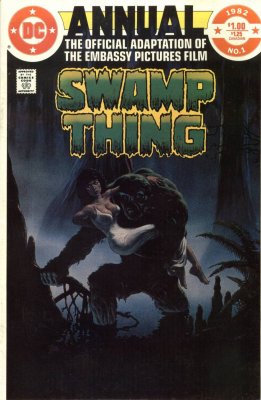 Scientist Alec Holland discovers a way to combine plant and animal DNA and is killed by a wealthy man wanting the secret for himself. A woman survives the attack and manages to escape with a vital piece of Holland's research. As mercenaries hunt her through the swamp, they are hunted in turn by the creature Alec Holland has become. . .The Swamp Thing! This fairly hefty one shot is the adaptation of the original Swamp Thing movie. . .which I've seen, but barely remember anything but Adrienne Boobeau swimming topless in the swamp.ANYWAY. . .The story is pretty much one long chase scene. Nothing is really explained and beyond names, the comic book mythology is pretty much ignored in favor of all-out action. I understand that this is an adaptation of a script and a movie has to tell a story in an exact amount of time, but they COULD have expanded on things a little bit in written form. I'll be honest here and say that based on this comic, I don't really want to re-watch the movie. The ending battle with Arcane in final boss form is a particular stinker.The art on this one is pretty good, as far as pencils and inks go. The coloring is garish and pretty sloppy in places. This probably would have looked a lot better as a black and white book. The painted cover (of the movie poster) is fantastic, showing off Ms. Boobeau's best movie starlet assets very nicely. . .and Swamp Thing looks cool too.Overall, good art in service to a flimsy story makes this a pretty average effort. I wouldn't really suggest this to anyone but curiosity seekers.

All in all, not a bad bunch of one shots.  Only a couple of clunkers among them.  I'd say my favorite was probably Sgt. Fury. . .just because I love the old war comics and it was pretty much a Silver Age story told with modern art.  A close second was the surprisingly good Fantastic Four Special because I'm not even a fan of the FF and it hooked me in.

On the other end of things, I'd have to say that Highlander was the real stinker of the bunch.  It had an extremely thin story and art that was a definite mismatch for the subject.  Second worst would probably have to be Terminator. . .a shame since I'm a huge Terminator fan, but there just wasn't that much to it beyond some bits of nice art.