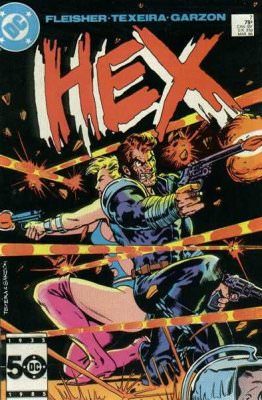 Hex's plan to allow himself to be captured in order to get inside Borsten's base and use his time machine succeeds with the help of a Conglomerate inside man. Stiletta (unaware of Hex's plan), infiltrates the base in disguise to kill her father (Borsten) and joins up with escaped time prisoner Stanley Harris.

Hex, Stiletta, and Harris all find their way to Borsten's time machine, but the plan falls apart and mayhem ensues. Harris manages to escape using the time machine, but it's destroyed before Hex can use it. Stiletta and Hex barely escape the destruction of Borsten's base and Borsten is seemingly killed in the explosion.

I probably should have included this issue with Part 1 of these reviews because it ties an action-packed bow on top of just about all the storylines from the previous 6 issues with an explosive finale that leaves Hex trapped in the future and pretty much ends the first arc of the series.

For some reason, it seems that Texeira's art is getting worse. Not sure if these issues were rushed or if the inking is to blame, but as this series continues I can see a definite downward trend in the art department.  The art's never been GREAT, but it's trending from pretty good down toward bad. 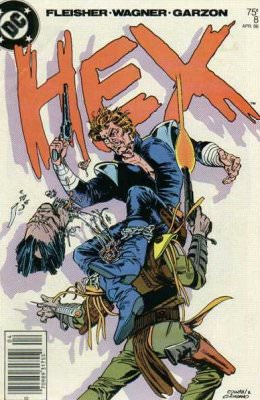 After Hex and Stiletta escape the destruction of Borsten's base, they find themselves without fuel for their flyer.

Hex heads into a nearby town to try and find fuel and through a series of circumstances finds himself as a contestant in a deadly shooting gallery maze.

After fighting his way through and winning against the odds, Hex returns to find Stiletta has been abducted. . .

This issue is pretty much setup for the next story arc, which involves Hex's search for Stiletta. Overall, even though the art shows improvement, it feels half-baked, its purpose only to separate Hex from Stiletta and serve up some halfway decent action scenes.

DAY OF THE CYBORG 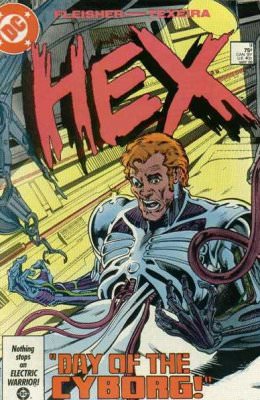 While searching for Stiletta, Hex is taken prisoner by a mad scientist and has to fight his way out of a compound full of killer cyborgs.

This one and done issue can be summed up in one simple phrase: "Jonah Hex shoots a bunch of robots". And really. . .that's about all there is to it. 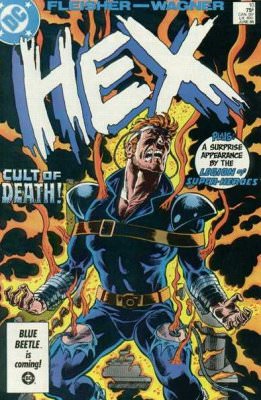 Hex is hired to save the daughter of a wealthy man from the violent cult she has joined. PLUS a pointless cameo by some of the Legion of Super Heroes.

I've noticed a pretty steady decline in the writing since issue #7 tied up the introductory storylines. . .and this is probably the worst issue in the series so far. The cult that worships and dresses like 1930's gangsters is beyond ridiculous and borderline insulting to my suspension of comic book disbelief.

The ballyhooed appearance on the cover of The Legion Of Superheroes is pretty much a pointless 3 panels of a few members of the Legion (including Superboy) saying "Where the heck are we?" before moving along.  It's a pretty obvious and extremely weak attempt at a reader grab.

Not good. After a pretty strong start, it looks like Hex is jumping the rails and heading for the cliff.

NIGHT OF THE BAT 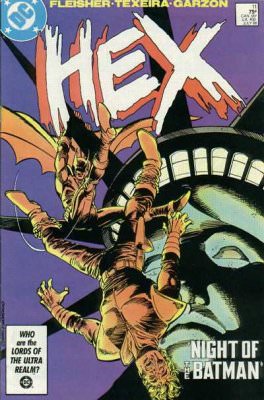 Agents of the organized crime syndicate known as The Combine convince Hex that a vigilante known as The Batman in New York City is behind Stiletta's disappearance. Hex agrees to take down Batman without realizing he's being used to do their dirty work.

So about halfway through the run of Hex and it's becoming pretty obvious that DC is trying to lure readers by bringing in some traditional superheroes. . .the pointless Legion of Super Heroes cameo in last issue and this issue's future Batman.

Unfortunately, the attempt to cash in on Batman just seems painfully obvious this far down the line. Not sure how it looked then, but judging by the fact that there's only 7 more issues left, the tactic didn't work.

All in all, this issue seems forced, rushed, and desperate. Batman just seems out of place in the post-apocalyptic world of Hex, and the hoops that were jumped to get Hex to New York to team up with future Batman are pretty ridiculous.

SEIGE OF THE TERMINATORS 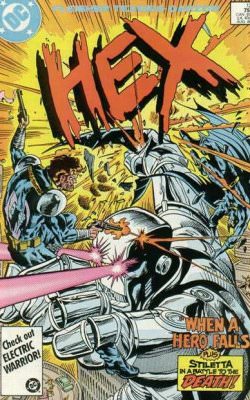 Batman and Hex engage in a good old fashioned "Heroes fight until they realize they don't need to be fighting" battle. After it's been established they aren't enemies and Hex has been played for a chump, Batman sets Hex on the trail to find Stiletta while he goes to take down The Combine.

Hex finds Stiletta brainwashed and fighting as a gladiator, but is unable to rescue her for the time being, so he joins Batman in taking down The Combine's giant terminator robots. After a brutal and destructive battle, the Combine robots are destroyed, the city is saved, and Batman is apparently dead.

Well. . .the future Batman didn't last long. Two issues in a weak-a$$ robot punching. . .er. . .shooting story. I guess DC decided that IF they wanted to do a future Batman, they'd better steer clear of connections to the failing Hex title.

All in all, except for the decent Stiletta/ Blonde Fury gladiator fighting scenes, this issue was pretty much giant robot fighting.

One sort of creepy thing that DID catch my eye. . .and I wonder why nobody else has mentioned this before. . .but Hex takes down a giant robot by dynamiting the foundations of the World Trade Center and collapsing the twin towers on top of it. This comic was written in 1986.

After a decent start, I have to say that there's not much to like at all in the second batch of HEX issues. . . except for issue #7, which REALLY belongs in the first part of these reviews as it is the conclusion to the storylines of the first 6 issues.

The art is beginning to severely swerve in quality from pretty good to downright bad and the writing is increasingly aimless and wandering. . .it seems like they were wanting to go toward "one and done" issues like most of the previous Jonah Hex series but really couldn't manage it.  Not sure if there was editorial/executive interference with the story, but there's definitely some sort of conflict going on.

Lastly, there are obvious signs of this comic beginning to fail on the stands with a sudden swerve toward including superheroes in the story. . .a pointless cameo by the Legion Of Superheroes in issue #10, and Hex teaming up with a future version of Batman in issues #11 and #12.  It just looks forced and desperate. . .and SPOILER FOR PART 3. . .the superhero shenanigans just get worse.

All in all, this batch of issues is just sort of sad.  DC should have made HEX a 6 issue mini instead of trying to sustain it as an ongoing series.  After a clearly defined first story arc, it's just sort of wandering at this point.

The last (and worst) issues of DC's HEX.