As far as popular entertainment goes, "The Western" is a genre that has all but disappeared.  Historical research and general hindsight has pretty much washed away the shine that used to glow from the legendary figures of the old west, showing them to be deeply flawed (and for the most part, mentally disturbed) individuals on BOTH sides of the law.  The strife between brave cowboys and vile redskins has been revealed as government-sponsored genocide.  The heroes have become the villains.

But that hasn't always been the case.  There was a time in popular American entertainment when the Cowboy was king.  Western movies, T.V. shows, books, and comics were dominated by tales of the wild west.  Men of stern character fought to tame a lawless frontier full of outlaws and savage indian tribes.

The "Golden" age of  western entertainment is arguably the 1950's.  Classic movies such as The Big Country, High Noon, 3:10 to Yuma, Shane, Rio Bravo, and many more ruled the box office.  Gunsmoke, Rawhide, The Rifleman, Wagon Train, Maverick, The Lone Ranger, and others were the most popular shows on television.  Songs by Gene Autry, Roy Rogers, Tex Ritter, and other "Singing Cowboys" were all over the radio.

And then there were the comic books.  Kid Colt, All Star Western, Rawhide Kid, Lone Ranger, Cisco Kid, and so many others.  If you love Westerns as much as I do, then there's no way you can't consider the 1950's as the single greatest era of Western entertainment of them all.

On today's "Retro Review"  we're going to take a look inside a random comic from that Golden Age of Westerns. . .Issue #57 of Charlton's "Cowboy Western", from October of 1955.

I'm gonna review what has probably NEVER been reviewed, and nobody has ever ASKED to be reviewed. . . because that's what I do! Let's get to it. 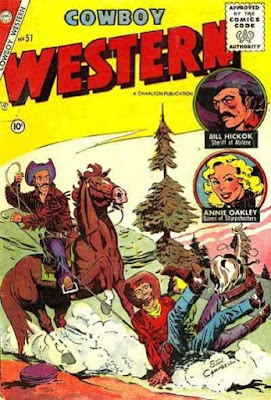 First off, I can't really credit or mention by name any writers, artists, inkers, color artists, etc. . .on this issue except for Stan Campbell, whose signature is on the cover.  It's obvious from the different art styles and writing that at least 4 artists and 3 writers worked on this issue, which covers a pretty wide territory: 4 stories between 4 and 7 pages long, 2 one page stories, and a 2 page prose story.  I have to say, that for a kids dime this comic was packed FULL of Western goodness!

Wild Bill Hickok saves the life of an outcast Comanche brave, then helps him regain his place in the tribe after helping reveal the conspiracy behind the crime that led to his banishment.

This story is well-written, and probably the best of the bunch.  I can tell by the look of it that Stan Campbell (the cover artist) probably also drew this story.  The coloring is a little heavy-handed on the Indians, and the backgrounds are sparse, but all in all, this was a very nice story.

Annie Oakley foils a robbery at one of her shows, then when the escaped criminals try to get their revenge on her down the road at another show, she turns the tables and foils them AGAIN.

Another pretty well-written story.  I liked the art on this one better than the opener, except the coloring was extremely sloppy on a couple of pages.  You can definitely tell this is a product of the 1950's from Annie Oakley's hairdo, wasp waist, and big bullet-bra . . .but I'm pretty sure that 50's boys reading this didn't mind one little bit.

This one page "joke" story was pretty bad.  Lousy art, sloppy colors, and a weak joke.  The whole thing was pretty pointless except as a space-filler.  Moving on. . .

A two page text story with no illustrations, it's actually not bad at all.  Pretty good, really.  It's about some students trying to pull a prank on their professor and him turning the tables and scaring the out of them instead.  I sort of wish they would have skipped the "Ranch Boys" thing and made this story a 3 page illustrated story instead.

Jesse James and his brother Frank are trying to lay low in the town of Cascade, but when the hotel they are staying in is attacked, they step in to stop the robbery and are forced on the run once again, despite their heroic actions.

I liked this story quite a bit.  The "outlaws on the run, but doing good deeds" Robin Hood feel of it was very nice, and the art was also some of the best in this issue, despite some very sloppy coloring in certain parts of it.

Another one pager, but better than the first one in this issue.  The art was nicely done, with an exaggerated, comical look to it and the joke was actually sort of funny.

Golden Arrow (a blonde white man with a bow and arrow described as "The Robin Hood of The West) helps save an indian chief from an attack by another tribe, then helps recover a box of stolen jewels.

This was the worst of the regular length stories.  The art was sketchy and looked really rushed.  The colors were extremely sloppy through the whole thing.  The writing was just. . .bad.  The dialogue, especially with the indian characters, was awful.  The whole plot of the story was ridiculous.  NOT a good way to end the issue.

Overall, this book was 70% good and 30% .  The best story was the opener "The Trap", and the worst was the closer, "The Renegade Robbers".  The art in general was decent, with some very nice panels to be found throughout. Unfortunately, the sloppy coloring through the whole issue marred some of the better art.

I have to say that for a comic book from the 1950's viewed from a perspective of 60 years of revisionist history and western deconstruction, I was surprised to find myself liking it as much as I did.

Back to Longbox Junk business as usual with Wolverine/ The Punisher: Revelation.  Punisher shoots robots with holy guns and sticks an exploding bomb into a stylish trenchcoat that's ALSO a warpgate to heaven!