Captain Phasma has been hyped up by the promotions for both The Force Awakens and The Last Jedi as some sort of awesome and mysterious villain. . .and she DOES look badass with her chrome stormtrooper armor and flowing black cape.

Let's face it.  The hype isn't the truth.  Captain Phasma is pretty much the new Star Wars movie's Boba Fett.  Sure, she LOOKS awesome, but she has what. . .five minutes total screen time over two movies?  That and SPOILER she dies (maybe) a weak- death in The Last Jedi, just like Boba Fett went out like a chump in Return of The Jedi.

Despite Boba Fett's lack of screen time and weak death, he STILL somehow managed to become one of the most popular characters of the original Star Wars movies.  His lack of involvement in the movies themselves was more than made up for in a metric SH*TLOAD of novels, stories, video games, and comic books starrring that Badass Bounty Hunter in the Mandalorian armor.  , he even got an origin story in the Prequel trilogy!  Not bad for a character that has about 5 spoken lines over two movies.

I think it's going to sort of become the same thing with Captain Phasma. . .the badass b*tch in the chrome stormtrooper armor who barely has any lines in the movies.  There's this mini, a novel (haven't read it) appearances in other comics and novels, video games, and all sorts of assorted merch with her shiny chrome self plastered on it.  I'm thinking this is a character who will truly find a life OUTSIDE of the movies.

But enough of that.  Let's take a look at some recent Longbox Junk. . .at least it's junk if you don't happen to have one of the $250 variant covers, which I do not.  STAR WARS! Let's do this!

THE LONGEST TITLE ON THE SHELF 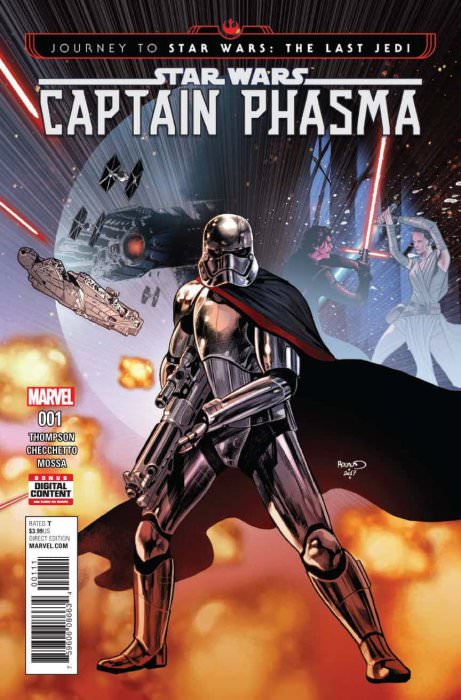 After Captain Phasma is forced to lower Starkiller Base's shields, allowing a full Resistance assault to take place, she makes her escape from the doomed weapon planet. . .but not before returning to erase all traces of her involvement in the attack.Phasma finds out that a Lt. Sol Rivas has discovered the information she wants hidden, and sets off in pursuit as Starkiller Base comes to pieces around her. . .finally making her escape and continuing her chase off world with the help of Tie Fighter Pilot TN-3465.Of all the new Star Wars mini's that have been coming out on a regular basis since Marvel took over the license, this is probably my favorite first issue! The story is told mostly in captions as Phasma files a report of the last day of Starkiller Base, but what she says on record and what happened are usually two different things. I really liked the difference between what was written and what the art was showing as Phasma downright lies her way through her report, trying to cover up her pretty much being responsible for the destruction of Starkiller Base. The art in this issue is nothing short of remarkable! There is a double page spread of Resistance X-Wings fighting their way through Tie Fighters to attack the base that is definitely poster-worthy. Phasma herself is a looming, intimidating presence as she relentlessly stalks her prey through the destruction of the Resistance attack. Overall, this is one of the best first issues of ANY comic I've seen come out in a long time. It's fast-paced, perfectly illustrated, and leaves you wanting to see what happens next. VERY well done. 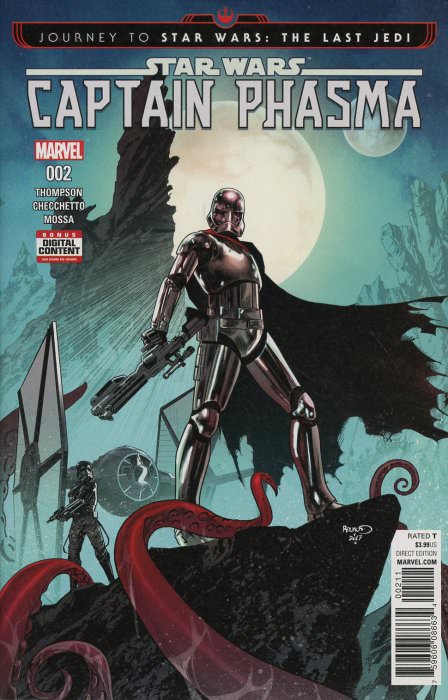 Captain Phasma and Tie Pilot TN-3465 continue their pursuit of Sol Rivas to the mostly water covered world of Luprora. After escaping an attack by a huge aquatic monster, Phasma and Pilot disguise themselves and meet a group of colonists who live without advanced technology because they believe it was the cause of the end of their own original world.The colonists inform Phasma that Rivas is the captive of the original inhabitants of Luprora, a brutal aquatic race and probably dead. Phasma decides that she wants to make certain of that. . .The second issue of this series isn't nearly a good as the outstanding first issue, but that doesn't mean it's bad at all. It's quite good. . .it's just that it's more setup for things to come instead of a fast-paced escape. It's also told in a more straightforward manner than in the first issue, without the conflicting words of Phasma's report and the truth of the art.The art continues to impress. The giant aquatic monster that attacks them shortly after arriving on the planet is a particular standout.Overall, the second issue is good, but not great. The story and art both remain very strong, but it's mostly setup for events to come. 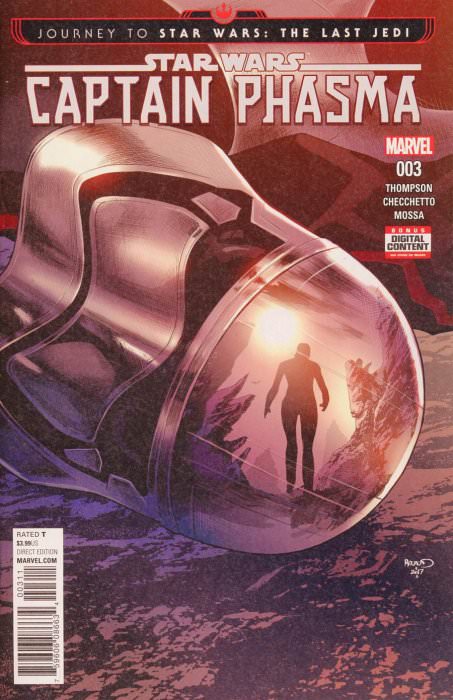 One of the colonist's children takes Phasma and Pilot to the last remaining decrepit starship of the original colony.Phasma recruits the colonists and rallies them to attack the aquatic race threatening their existence with a rousing speech. When Pilot congratulates Phasma on her leadership and care for the colonists, Phasma informs her that the colonists are simply cannon fodder and that she expects every one of them to die.Phasma and the colonists use the generators of the ruined colony ship to clear a path into the place where Rivas is being held and the issue ends with a horde of enemies rushing to the attack.Like the second issue, this one can't compare to the excellence of the first. . .but it's not bad. It's just that it's more setup for what will obviously be a big climactic battle in the final issue. Most of the issue is taken up with preparations for the fight. There are some nice story moments, such as when Phasma deflates Pilot's opinion of her being a hero with the truth that their allies are all expendable as long as Phasma is able to get to the place where she can discover whether or not Rivas is alive or dead. I REALLY like the straightforward and relentless personality the writer gives Phasma.The art remains very strong, with several great panels of Phasma posing as the heroic savior of the colonists.Overall, this is pretty much another setup issue. It's not bad at all, it just doesn't come close to the fantastic first issue. 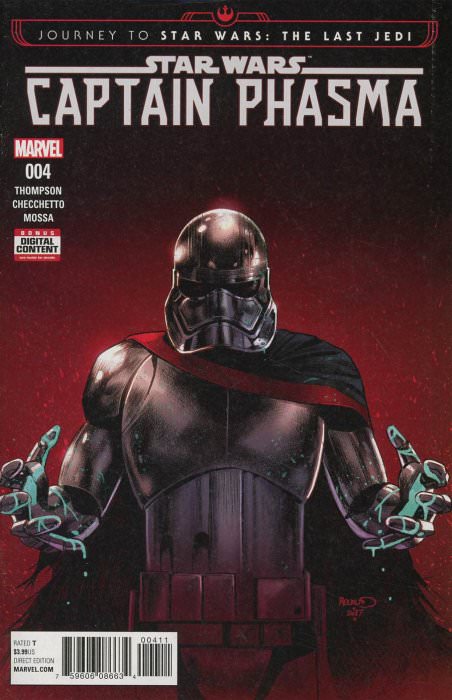 As Phasma and her colonist allies jump into battle with their enemies, Phasma makes her way to where Rivas is being held prisoner and assassinates him without realizing that Pilot overheard them talking about Phasma's involvement with the destruction of Starkiller Base and witnessing the assassination of Rivas.Leaving their allies behind to face their certain death, Phasma and Pilot return to their Tie Fighter, where Phasma kills Pilot before returning to The First Order and reporting to General Hux that she successfully pursued the traitor responsible for the destruction of Starkiller Base and dealt with him.The final issue returns to the excellence of the first, wrapping this story up very nicely with a lot of great scenes. . .the assassination of Rivas while Pilot secretly looks on in horror as she learns the truth. . .Phasma killing Pilot in cold blood after telling her she's nothing but a loose end. . .Phasma's report to Hux where she blatantly lies to his face. . .just Phasma being written as brutal, relentless, and uncaring for anything but preserving her own life and reputation. It's a chilling portrayal of a character who got very little screen time in the movies that makes me want to learn more about how she got that way.Overall a fantastic ending to the story with extremely strong art (even though Hux doesn't really look like the actor portraying him in the movies).

I found Captain Phasma to be an excellent read with fantastic art, and would highly suggest it to any fans of Star Wars.  The story was a simple one, but it had some great moments that really make me want to learn more about Phasma and how she became the ruthless, uncaring, relentless character she is portrayed as in this story.  For making me want more of a character that barely has 5 minutes of screen time across 2 movies, I have to congratulate the creative team on this one for a job well done.

Anyone remember that time when the Punisher was an angel?  You know. . .that time in Punisher's career that ends up on just about every "Worst Marvel Storylines" list ever ?  Let's go there!