As I read this next batch of Topps' X-Files comics. . .moving through the second year of the run and into the third. . .I begin to wonder if perhaps I might be bearing witness to a conspiracy over twenty years old.

I've already touched a bit on on the conflict going on in the background of this series that eventually led to the departure of the original writer in favor of one more accepting of the fate of writing a tie-in to a hugely popular T.V. sensation, but not being able to use any of the ideas, storylines, or characters of the source material beyond bare-bones unchanging sketches of the main characters and a basic outline of the show's overall theme.

As I continue reading, it seems to me that there MIGHT have been more going on than even the hints scattered here and there on the internet have revealed.

YES! CONSPIRACY! YOU! CAN'T YOU SEE IT?

There's no other explanation, my doubting friend. You'll come to understand, just as I have!  It is MY contention that, at some point, Topps and their T.V. production overseers began to TOY with the readers of the X-Files comic.  They saw it as a game. . .a challenge of sorts.

Just HOW badly could they make X-Files comic books and STILL profit from rabid fans of the show desperate for a taste of their favorite characters between seasons?

What?  You don't believe me? The truth is out there! 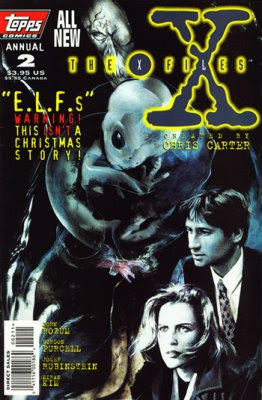 Mulder and Scully become involved with an obstetrician who believes that he's receiving alien signals telling him to do terrible things.

I'm still not sure if Topps understood the concept of an "Annual", since this double-sized issue came out in December of the SAME year that X-Files Annual #1 came out in August. Annuals don't normally come 4 months apart in the same year. I have the feeling Topps was just trying to milk out that extra dollar while X-Files was smoking hot.. . .BUT I DIGRESS!

The story at hand is actually pretty good. Which is a bit of a surprise, considering the generally mediocre quality of this series. I'm not saying it's great. . .but any time an issue of this series hits the level of "Pretty Good", it's sadly noteworthy.

I like that the doctor being slowly driven mad by "alien signals" was actually just slowly going insane. No aliens. Also, no real resolution or happy ending. . .just insanity and blood.

I haven't been a fan of Purcell's art on this series at all, but I have to say that this issue is probably his best effort yet. He manages to somehow reach the lofty heights of. . .okay.

All in all, this issue was pretty good, compared to the other Rozum/Purcell issues I've read in this series so far. But when the bar for quality is set at a low "Pretty Good", there's plenty of room for improvement. 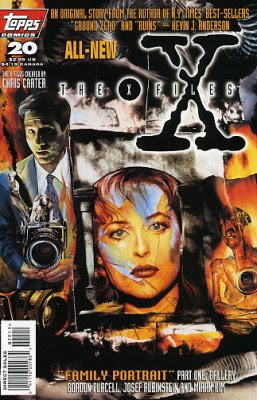 Scully and Mulder investigate a backwoods serial killer and end up discovering a camera that steals souls. . .SURPRISE!

Any sense of ambiguity that the X-Files comic once had is pretty much gone at this point, with big chunks of exposition leaving no doubt that yes. . .this IS indeed a demonic soul-stealing camera.

The art looks like the camera in question stole its soul as well. It's all very flat and unambitious. 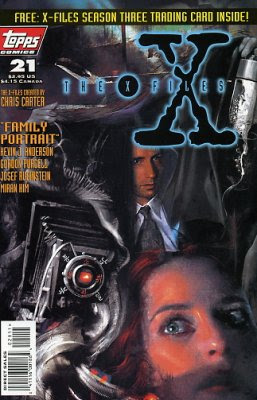 Mulder discovers the history of the demonic camera in a hidden diary and realizes too late that the cool picture he took of Scully sucked out part of her life to feed the demon. . .OOPS!

Mayhem ensues when the original owner of the camera returns to take it back, the demon is released, and the camera is destroyed.

Fiery demon fights and evil immortal Nazis aren't the X-Files I loved. And the art on this issue might be the worst of the run so far. 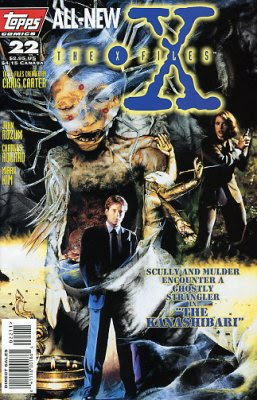 Mulder and Scully head to Hawaii to investigate the strange deaths of college students and discover a ghostly being out for revenge on those who killed him.

Once again, any ambiguity over whether or not supernatural causes are involved in the case are thrown out the window, which is a shame because that ambiguity is exactly what made the X-Files great. Without it, this issue is nothing but a vaguely interesting ghost revenge story.

On the good side, Adlard is back on art for this one and I can definitely see his work evolving and improving. 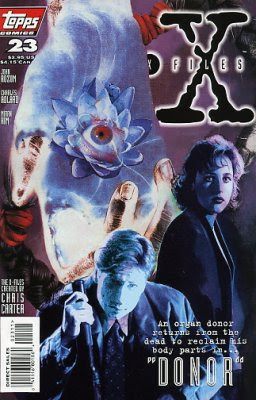 A dead man rises from the grave to retrieve organs donated against his wishes. 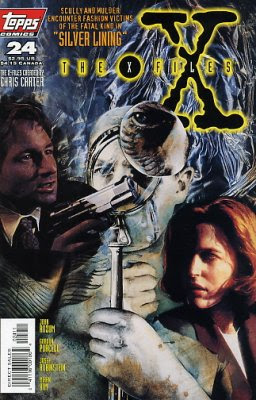 A sentient overcoat drives a disfigured man to murder by draining their life to feed the coat and heal his scars.

I THOUGHT the previous issue was the worst of the run so far. It's a friggin' MASTERPIECE compared to this one. This piece of doesn't even have Adlard's improving art to soothe the pain.

I look at the remaining stack of issues I have left to review. . .and I despair. 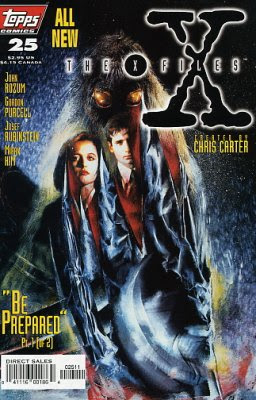 Scully and Mulder trek into the Montana wilderness during a snowstorm in order to find a troop of Boy Scouts who are in danger of being attacked by a man possibly possessed by the cannibalistic spirit of the legendary Windingo.

Ridiculous story, awful art, and $hitty dialogue hit the creative trifecta of "No F@cks left to give." 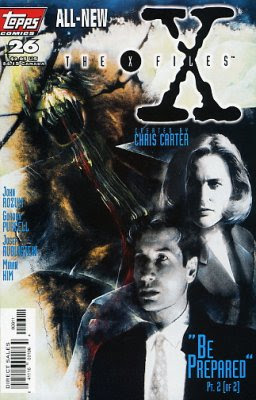 In the Montana Wilderness, Scully and Mulder track down and confront a homicidal Boy Scout leader and discover that things weren't what they thought. . .

This issue is probably the low point of this series so far. The story is ridiculous and full of holes. The art is awful. It's plain to see that this was rushed (both issues of "Be Prepared" shipped in the same month) and minimum effort was expended all around.

This issue is so bad that to tell the truth, I don't even want to read more X-Files. This series is slowly, but surely, eroding away at my good memories of the franchise as a whole. 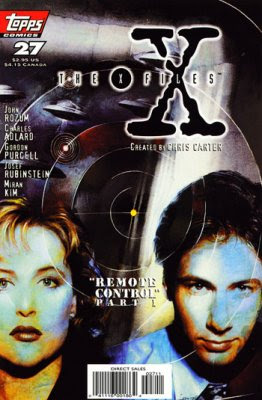 Mulder and Scully investigate the deaths of psychics who were formerly part of a secret government remote viewing experiment and discover links to Libyan terrorists and possibly more. . .

After the utter that's been in the past 6 issues, I'm pleased to report that I actually liked this story enough to not cringe at the thought of reading the next issue! To tell the truth, it even reaches the high bar set by this series of "Pretty Good".

The art is a strange thing here. It looks like after double-shipping the last 2 issues, this 3 parter was delayed, so they had Adlard AND Purcell working on it in a strange amalgam where Adlard does most of the backgrounds and supporting characters, while Purcell draws only Scully and Mulder.

It's sort of strange where the agents are talking to someone and the characters are clearly drawn by two separate people, but in the same panel. Normally, when two artists are on a comic, they do whole separate pages and you can see the transition. The shared panel thing is just odd to look at.

Still. . .strange art aside, this has been the first decent issue in quite a while. 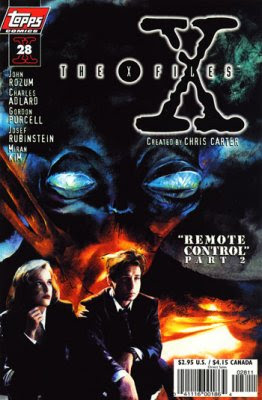 Mulder and Scully use the talents of a former CIA remote viewer to discover the location of the Libyan terrorists, a rogue former CIA psychic, and a stolen shipment of nerve gas. But before they can get information about the Libyan's REAL agenda, they are attacked by a squad of government assassins.

Once again, I was pleasantly surprised to actually be reading a pretty good issue of The X-Files. The story was interesting and I can easily see it as being an episode of the T.V. show.

The "Shared Panel" style of art by Adlard and Purcell is still pretty strange, but they managed to meld together a bit better than in the first issue. . .probably with the help of some more consistent inking. 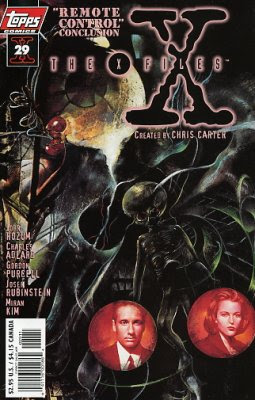 It's just my luck that the concluding issue of what has really been the only decent story in this handful of X-Files comics just happens to be the only one that I'm missing.  Couldn't find it scanned anywhere online to read either. . .a shame.  This story was giving me a glimmer of hope.

But then that small hope was utterly destroyed by. . . 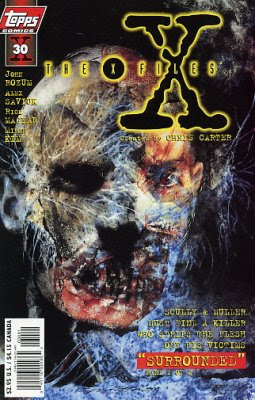 Anti-Government domestic terrorists under siege by the FBI ask for agents Scully and Mulder to come to their compound to investigate a gruesome murder that nobody can explain.

After a few pretty good issues, this series goes right back to being a $hitty excuse to suck money out of X-Files fans with an utterly ridiculous story so full of holes and bad dialogue that it's practically unreadable.

The new art team coming in on this story are also pretty wretched. I didn't think X-Files could so much worse than Purcell, but guess what. . .wrong again.  The art is darker and moodier. . .the new inker does a decent job. . .but the pencils are by the book, take no chances, basic comic art that would be better suited for a superhero title.

As a fan of the X-Files, this batch of comics was a little rough to get through.  In the first year and a half of this series, I saw a creative team struggling against the heavy-handed restrictions placed on them and trying to make the best of it.  They didn't QUITE hit the mark, but at least earlier issues in the run attempted to establish their own personality and mythos that could exist alongside that of the T.V. show the comic was based on.  The art was uneven, but improved as things went along.  Supporting characters from the show were present, if used sparingly.  There was actual EFFORT to be seen.

Unfortunately, after the exit of the original writer, the comics took a sharp swerve off the rails in quality.  This series was never GREAT to begin with, but there comes a point where one can easily see what effort was being put into trying to actually make a good comic series disappear.

No more overarching stories or themes.  Not even a mention or reference to any other characters or past events from either the show OR previous issues of the comics.  A total lack of ambiguity in the stories that completely missed the target of just WHY the show was so popular. . .those grey areas between truth and belief.

In short, The X-Files comics have become nothing more than a series of disconnected vignettes existing in a storytelling vacuum where the only hintd of connection with the source material are the barely-sketched and unable to change main characters and the basic premise.

I really am NOT looking forward to the final 10 issues in this series.

To tell the honest truth, just thinking about reading them makes me a bit sad.

Feel my nerdly pain and possibly a bit of rage as The X-Files limps to a conclusion.