I actually do reviews of single issues in my collection that are worth a little more or are considered more "collectable" and wouldn't really be called "Longbox Junk" for another site and figured that since I'm a sharing kind of guy, I'd bring a few of them here.

The main difference between these reviews and Longbox Junk reviews (beyond the value of the comics) is that sometimes you can find other reviews of some of the Longbox Junk. . .with these, I can just about 99.99% guarantee that there has NEVER been a review, simply because most of the non-junk reviews are from the 1950's to the 1970's and comic book reviews weren't even a thing then. Uncharted territory, son!

Let's start off with the non-junkers here at Comic Book Realm with a classic Batman Christmas story to fit the Holiday season, and I'll drop in a few more later. . .ENJOY!

ISSUE 219
Merry Christmas one and all! And what better way to celebrate than to take a trip back in time to 1970 with the Dark Knight Detective? Okay. . .I'm sure there MIGHT be better ways to celebrate Christmas, but as far as holiday-themed comic book stories go, I'm pretty sure this one is generally considered to be up in the top ten.

So grab a mug of hot chocolate, plug in the Christmas tree lights, and let's do this! 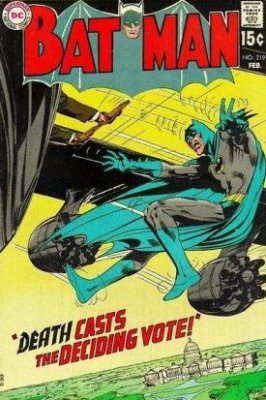