Except for The Walking Dead, I'm not really a fan of black and white comics at all, but when I saw these three issues sitting on the shelf at my local comic shop for the measly cost of $1.50 each, I HAD to get them.  $4.50 for 3 new comics?  Heck, son. . . the first issue of Doomsday Clock costs $4.99 by ITSELF.

So I bought these comics based on cover price and gave them nothing more than a quick flip through, enough to see there were Nazis and Zombies.  Other than that, I was coming in cold.  So did I get my $4.50 worth? Read on!

ISSUE ONE - NO BETTER FRIEND 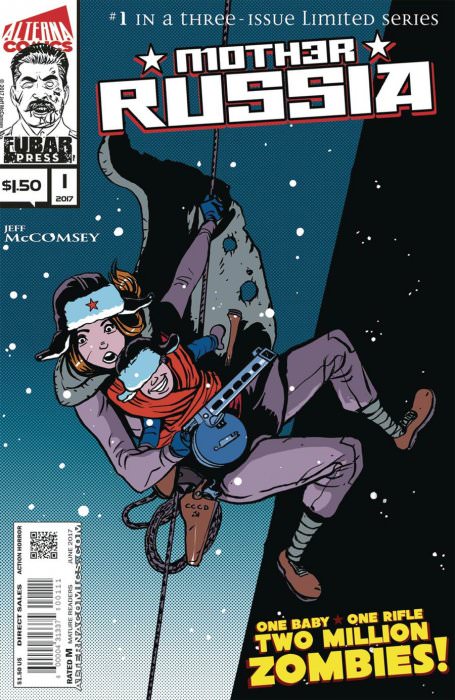 The zombie apocalypse occurs during WWII in 1943. A lonely Russian sniper living in a fortified bell tower's routine is interrupted by the sight of a baby among the walking dead. She leaves her safe place, but after rescuing the baby, is prevented from returning. They are saved by another survivor, but he is revealed to be a German officer. . .

At this point, I'm thinking zombies and Nazis are about two of the most overused villains in any medium. . .but there's a lot to like about this comic.

First off, the setting of Stalingrad is a great idea. Helll on earth made even more hellish. Second, the art is fantastic. It's in black and white, but very well done and it doesn't shy away from the gore. Third, the story moves at a frantic pace due to the sparse dialogue and a "show, don't tell" storytelling method.

But there's some bad as well. . .the art falters toward the back half of the book, with a few pages being blurry (reproduction or printing error, probably, but still. . .) and some panels looking sketchy and unfinished. Also, the frantic pace of the book makes it an extremely quick read. It literally only took me about 5 minutes to read this comic. In other words, it's very light on actual story.

All in all, this was a good comic. There were a few issues, but if you're looking for fast-paced zombie action with an unusual setting and great art, you can't do much better than this. 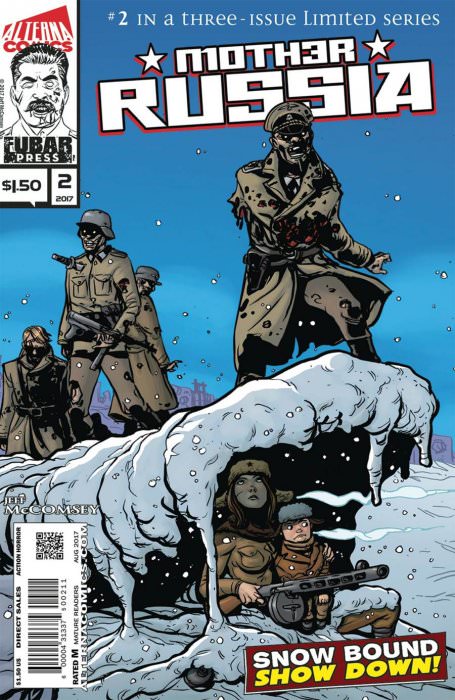 Svetlana's savior introduces himself as Major Otto Steiner and, after making their way to his safe house, tells her what he knows about the zombie apocalypse. They agree on a plan to try to make it back to her bell tower where there is enough food and ammunition to last until winter. . .

This issue slows down the extremely brisk pace of the first for a bit more storytelling about the onset of the zombie apocalypse. It's still a pretty quick read, but I liked this issue more than the first. Steiner's description of the collapse of his brigade, combined with the great artwork showing the Nazii unit being decimated by the dead is fantastic.

But it's not all good. The baby seems to be more of a plot device than an actual person, and once again despite the art being generally great, there are places where it looks rushed and unfinished.

Overall, this issue was superior to the first. As I read it, I was thinking that this would make a great movie. The writing and art are very cinematic in nature. 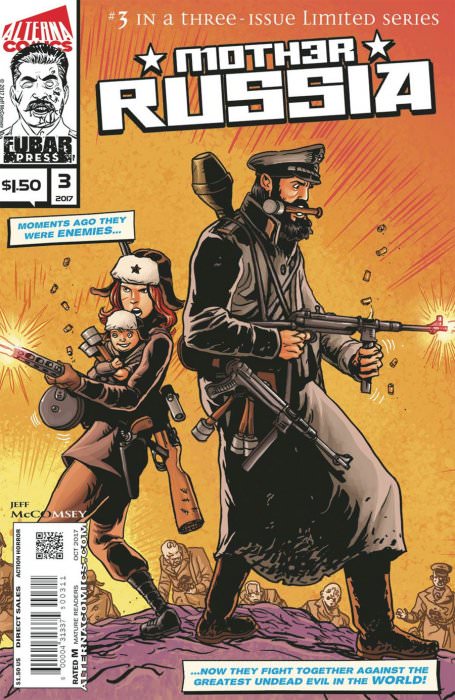 During a desperate rush for Svetlana's sniper nest, Major Steiner sacrifices himself so that Svetlana, the baby, and his dog can live. . .

This issue was pretty much one long running battle as Svetlana and Steiner push their way through a zombie horde, trying to get back to her fortified bell tower. The art is utterly brilliant and carries most of the weight of this issue as there is very little dialogue. It's an extra-sized issue, but you can't tell because of the extremely fast pace.

Steiner's explosive sacrifice at the end was a bit predictable and the "after credits" epilogue (that looks like it's setting up future stories) seems unnecessary, but those were really the only things I found wrong with this issue. All in all, a fine ending.

I'd definitely say I got my money's worth on this three issue mini.  I've never heard of Jeff McComsey before, but this series was pretty much a one-man show, with him wearing all the hats.  His art was cartoony, but detailed.  It reminds me a bit of Paul Pope and the overall impression I got reading these issues was that it was very cinematic. . .this series could be easily translated to the screen.  There's an economy of dialogue and a fluid motion to the art that makes me want to look for more work by McComsey.

But be warned. . .that economy of dialogue (except in the second issue) leads to an EXTREMELY fast reading experience.  It literally took me only about 20 minutes to read all three issues.  There's no character developement to speak of and the fantastic art occasionaly fails, looking sketchy and unfinished in random panels. . .but those are small complaints.

Overall, I'd say that Mother Russia is a nice little gem, and I highly suggest it.

How about we tip a sacred cow?

Batman: A Death In The Family.

(Yeah, yeah. . .I know.  It's 4 issues in the middle of an ongoing run, but at this point, it's pretty much considered as a separate story when anybody talks about it.)