The original series (Volume 5) ended up turning into a short run of several self-contained Captain America team up stories which, while maintaining the original numbering, are listed in indica and on comic book info sites (such as this one) as separate titles.  So Captain America #633 is listed as the first issue of a "Captain America & Iron Man" three-issue mini.  It's kind of a strange thing.

ONE NIGHT IN MADRIPOOR 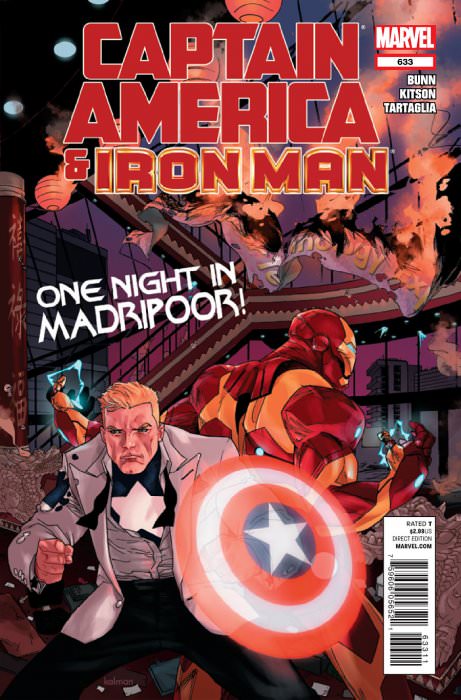 Captain America and Iron Man team go undercover to infiltrate a high-tech weapons show after hearing rumors that something extremely rare and dangerous will be up for bid. . .the Harvester Virus, which not only infects and shuts down any technology, but also downloads the details of any tech it comes in contact with. The auction is interrupted by an attack from Batroc and his B-list supervillain team (Batroc's Brigade) and the story goes from James Bond to punching everyone in sight real fast. Unfortunately, Iron Man's armor is infected by Harvester and the issue ends with the heroes at a severe disadvantage.

Overall, I'm half and half on this issue. I really liked the first half, with Cap in disguise and Iron Man as Tony Stark infiltrating the weapons show and working their separate angles on the information they have. There's some nice banter between them and there's a smooth heist movie/ James Bond vibe to it.

But then Batroc and his gang attack and it quickly turns into a typical superhero/supervillain quip-filled punchfest.

The art throughout was very nice and the cover was very well done. I was only familiar with Kitson's 90's work at DC (on JLA and Azrael) and was pleasantly surprised to see something more recent by him.

All in all, not a bad issue. . .a fantastic opening half and a ho-hum back half with great art throughout. 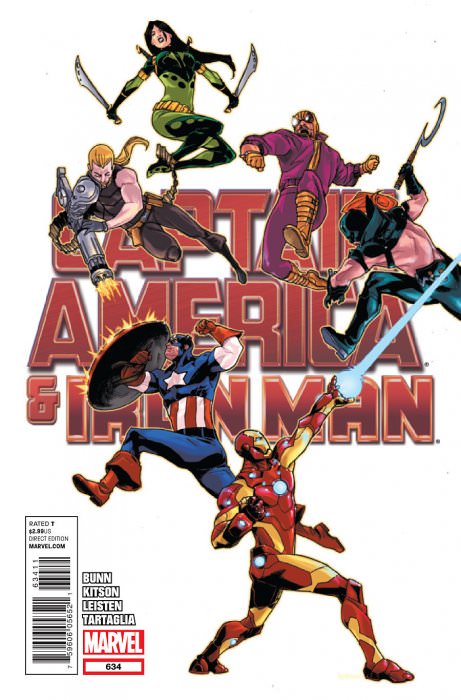 The fight between Batroc's Brigade, Captain America, and Iron Man comes to an end as Iron Man battles against his own armor and Cap is outnumbered. The high-tech science thief who hired Batroc and Company ( Kashmir Vennema) orders her team to retreat, allowing Cap and Iron Man the chance to regroup. While Iron Man tries to find a solution for the Harvester Virus, Cap goes to a safe house and suits up, but is interrupted by Batroc and his team, who feel that since Cap has been gone a while (this story takes place after the end of the Winter Soldier Saga), they need to kick his star-spangled for old times' sake.

Iron Man shows up to save the day in a suit of armor cobbled together from things he found at the weapon show. After some punching and quipping, the heroes discover that M.O.D.O.K. and A.I.M. are behind all the shenanigans and the issue ends.

This issue was pretty much a running battle from start to finish. There were some decent moments here and there. . .Iron Man reviewing one of Cap's fight quips and telling him to stop trying to be hip when he's about 100 years old, for example. . .but other than a few moments here and there, it was pretty much one long tiresome superhero/supervillain punch party that's been done over and over since. . .well. . .since the beginning of comic books.

Kitson shares art duties this time with Jay Leisten on inks, but the art was still good from end to end, with the fantastic cover and the design of Iron Man's patchwork military-style armor standing out.

Overall, this issue was pretty weak, compared to the first. It follows a well-worn "middle issue" path of resolving the first issue conflict and setting up the final issue conflict with an extremely by the numbers feel that a great cover and decent interior art can't hide. 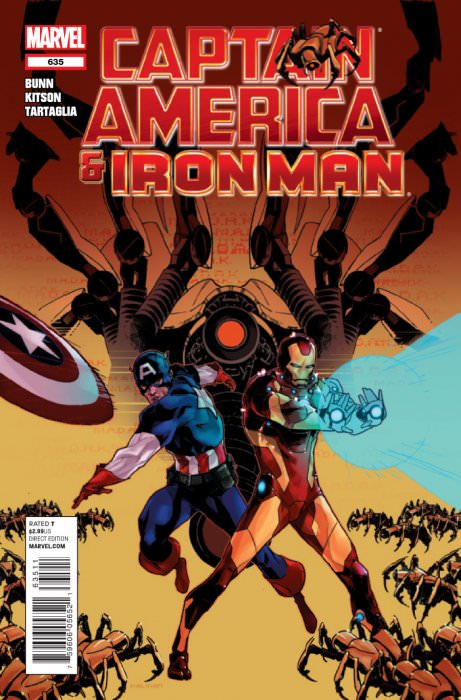 The battle to recapture the stolen Harvester Virus from Kashmir Vennema continues, with M.O.D.O.K. joining the fight and Captain America having to carry most of the weight with minimal assistance from Iron Man while he reboots his armor. In the end, Cap recovers the virus and captures both Batroc and Kashmir while Iron Man neutralizes the virus and takes down M.O.D.O.K and the rest of Batroc's B-listers. All's well that ends well.

Once again, this issue was almost nothing but fighting. There were decent moments scattered here and there. . .Captain America telling Batroc he's not even on his top ten villain list after Batroc was bragging about being Cap's arch-nemesis, for example. . .but really, this was 99% punching and quipping.

Overall, this final issue was okay and not more than okay. It's a perfect example of a by the numbers comic book. It's not BAD, it just doesn't really try to elevate itself past an average level.

All in all, this mini was okay.  If you like a lot of fighting with a little story instead of the other way around, then you'll probably like this more than I did.  The writing is brisk and I blew through all three issues in about 30 minutes.  The art was surprisingly good throughout.  For what it is, this is a pretty inoffensive and by the numbers mini. A Captain America team up book running alongside a regular solo series was a solid idea, but with extremely average and mostly-forgettable efforts like this one, it's no big surprise that it didn't last very long.  It just seems like they weren't trying very hard.