Longbox Junk Space: Above and Beyond The Gauntlet

Space: Above and Beyond was a short-lived (one season) Fox T.V. show in the 90's that focused on a squadron of U.S. Marine Corps space fighter pilots during a war with insect-like alien invaders known as "Chigs".

It was pretty gritty and realistic and still holds up fairly well if you can ignore the 90's-Tastic CGI effects.  As a former Marine myself, I was a big fan and hated to see it go after only one season. . .especially since they ended it on a cliffhanger!

I didn't realize this bit of Longbox Junk was only 2 issues long because I also have 2 out of 3 issues of the Pilot adaptation Topps also did and mistakenly had them together, thinking it was a 4 issue mini.  In other words, this one's gonna be quick and dirty.  Let's do it!

SPACE: ABOVE AND BEYOND 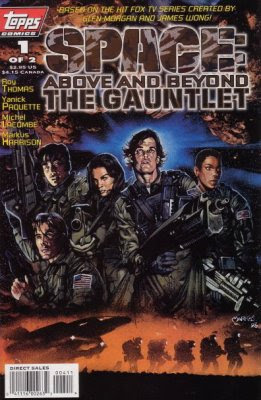 As a former Marine, I loved this short-lived Fox T.V. show. As for the comics, they're. . .okay.

When I looked at the fantastic painted cover of this first issue and saw comic veteran Roy Thomas on scripts and awesome artist Yanick Paquette, I had high hopes. Then I opened it up.

Truth to tell, this isn't a BAD comic. But also truthfully, the cover is the best part.

The interior art is pretty rough and very brightly-colored for adapting such a gritty show, A quick Wiki search tells me that this is some of Paquette's very early work. Like I said, it's not terrible, but it's also not that great either.

The 58th squadron investigates attacks in the Delta Pavonis region, known as "The Gauntlet". During the mission they are captured like chumps by aliens hiding in the asteroid belt and discover a former Marine is aiding them

Yeah, the great Roy Thomas is on scripts, but this isn't his best work. The dialogue is clunky and shows very little of the characterization or realistic military nature of the show.

All in all, I was disappointed. For the talent involved, it's extremely average. 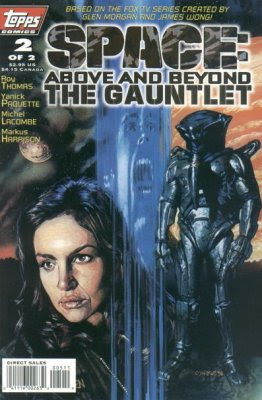 As with the first issue, the cover is pretty much the best part. A close second being the letters page bemoaning the cancellation of this great T.V. series.

As for the rest? Also like the last issue, it's okay and not much more than that. The story is uninspired and utterly average for the most part, but the ending is actually pretty good. . .

While Shane is tortured by the filthy traitor Harriman and his Chig allies, Nathan and Cooper break free and cause damage while the other team members sit and wonder where everyone went. Harriman finally comes to his senses and destroys the base. Nobody wonders how Harriman managed to grow a sweet ponytail in a matter of days. Nobody cares.

The art is not really a great fit for what is supposed to be gritty, realistic military action. It isn't terrible, but Paquette has come a LONG way since this.

All in all, despite pulling it together for a decent ending, this was another disappointing issue. Not bad, but not that good. It's just sort of. . .there.

Overall, this two-shot doesn't capture the feel of the T.V. show at all.  The art is average to borderline bad.  The story is by the numbers and fairly dull.  I was pretty disappointed by the whole thing.

Just binge the single season of Space: Above and Beyond instead.  This is hardly worth the time it takes to read it.  It wears the name of Longbox Junk well.  As a matter of fact, this Two Shot MIGHT just be the most perfect example of true Longbox Junk I've found yet.  Not good. . .not bad. . .just there.  No real effort put into it.  No expectations of ever being anything more than collection filler.

Since this was sort of an accidental two-shot, how about a few more on purpose?

Double issue chunks of Hellboy, Friday the 13th, and Zorro.